A major Bitcoin whale has implied that the upcoming halving is already priced in and BTC price can crash after the reward reduction.

Bitcoin (BTC) remains the top ranked cryptocurrency on CoinMarketCap and as the third block reward halving is set to occur in 14 days, investors are hopeful that the price will find a path to a new all-time high. This is because the block reward halving is usually preceded by a powerful rally that many have long forecast would bring the digital asset to a new all-time high.

“No, of course it's not priced in. On the very day of The Great Halvening, everybody will finally realize how underpriced BTC is, and they will all rush to buy it. In droves. With their unemployment checks.”

Joe007 is estimated to be holding a large Bitcoin short position, as shown by data from the Bitfinex leaderboard. It indicates that the trader is down $11.3 million in the past month. Given that the Bitcoin price has increased to around $7,700, it shows the whale is holding a large short position and expects the price of BTC to decrease in the short-term.

The Bitcoin block reward halving, a process that decreases the amount of BTC generated by miners, happens every four years. It cuts the revenue of miners by half overnight, forcing miners to adapt to the change and often shaking out overleveraged miners.

The halving is not an unexpected event; in fact, the mining industry prepares for the halving at least 12 months out by establishing strong cash-buffers and negotiating with electricity service providers to try to decrease the cost of mining.

In the near-term, there is no clear reason to anticipate a sudden surge in the price of Bitcoin simply because the halving is approaching.

The tendency of the cryptocurrency market to demonstrate “sell-the-news” sell-offs and the lack of a short-term upsurge in the past two halvings suggest that the narrative of a halving Bitcoin rally is premature.

The Bitcoin price is also hovering at a multi-year resistance area between $7,700 and $8,300. The 200-day simple moving average, which indicates a major long-term reversal point for an asset or an index, is also currently at $8,000. 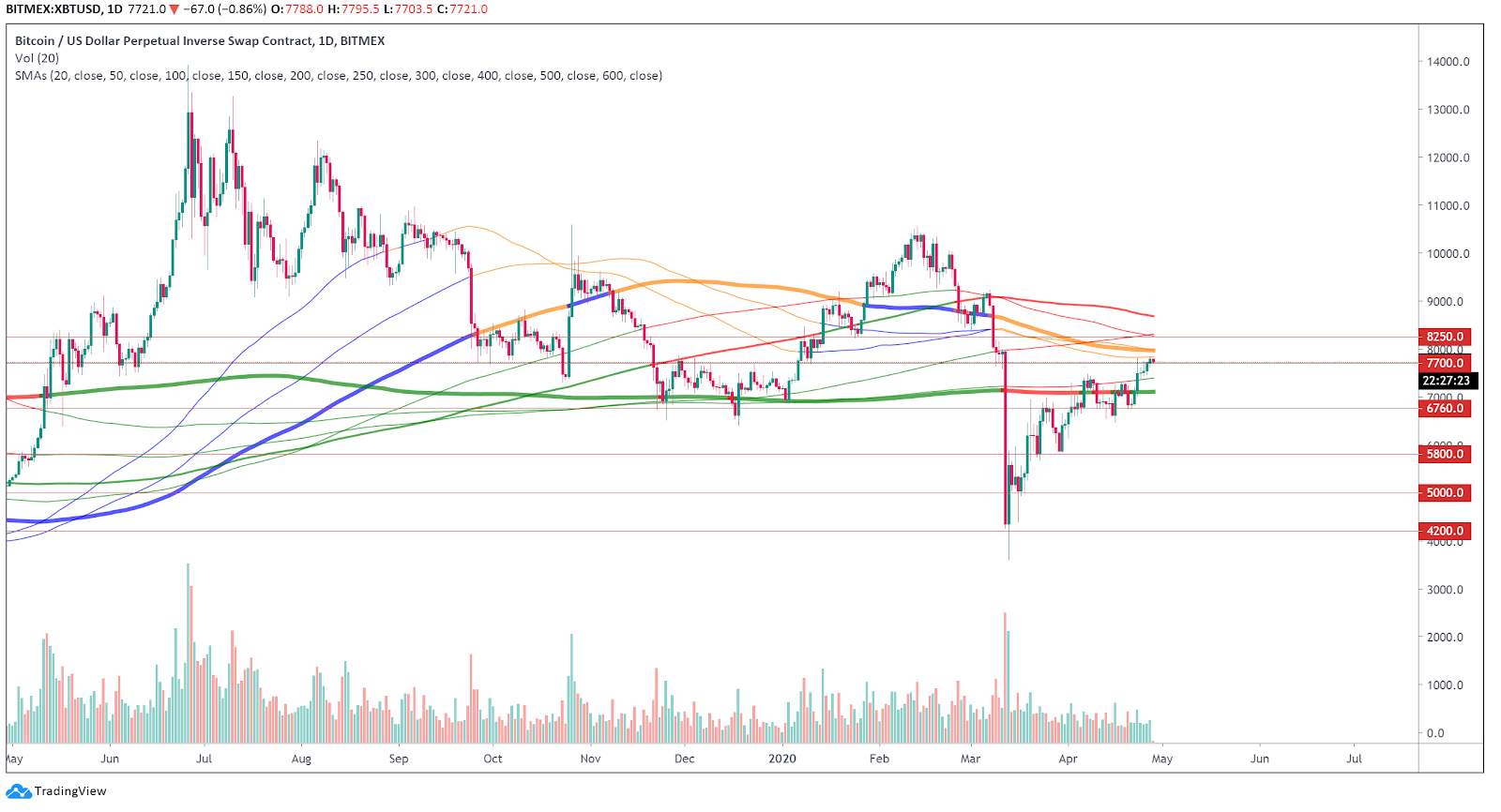 The clear overhead macro resistance and large sell order clusters on major spot exchanges at the $8,000 level suggest that BTC remains vulnerable to a sharp pullback.

A big correction cannot be ruled out

Billionaire investors like Marc Cuban, Carl Icahn, and Paul Tudor Jones are increasingly moving towards cash, hedging their positions anticipating big downtrends to arrive in the stock market in the short-term.

As the coronavirus pandemic expands and major countries remain unsure when to reopen their economies, high-risk assets like single stocks and cryptocurrencies could see subsiding momentum in the coming weeks.

At a technical level, despite the imminence of the halving, a rejection of Bitcoin at a key level like a 200-day SMA at $8,000 could lead to a strong market pullback, as seen in May and October 2019.