Will Blockchain Protect the World Economy from Financial Crises?

Ex-VP at J.P. Morgan Chase said that blockchain could have prevented the 2008 financial crisis. And he is not the first one to suggest this.

18899 Total views
432 Total shares
Listen to article
0:00
Analysis
Own this piece of history

In the blockchain movement’s ideology, the 2008 financial crisis holds a special spot. A critical juncture in the history of global capitalism, it readily provides a bedrock narrative that justifies the very purpose of a decentralized digital currency. This is what happens when we put too much trust in centralized custodians of wealth; this is what the breakdown of centralized trust — taken to the extreme — looks like. The year of 2008 is thus the legendary beginning of cryptocurrency — both the moment of the incumbent institutions’ great meltdown that paved the way for digital money’s being, and also the alleged inspiration for Nakamoto’s scripture, published the same year.

A part of the foundational narrative is the idea that the crisis wouldn’t have happened had blockchain been around at the time. Correspondingly, distributed ledger technology (DLT), if widely deployed in finance in the near future, could save us from the next Great Depression. At least that’s what many crypto visionaries and financial experts often claim — the latest being Pang Huadong, the former vice president of North American investment banking for J.P. Morgan Chase.

The ex-Wall Street executive offered little detail beyond his observation that blockchain is capable of reducing global financial risks and establishing trust at a low cost. In order to pin down Huadong’s argument, it wouldn’t go amiss to review how other influential crypto thinkers have reflected on the relationship between financial crises and blockchain technology.

The crisis of trust

In the recently published The Truth Machine, fintech journalists Michael Casey and Paul Vigna invoke the story of the Lehman Brothers’ collapse to illustrate one of the overarching ideas of their book — that of trust as a vital social resource. They maintain that, while many in the world of finance still view the events of 2008 as a crisis of short-term liquidity, this evaluation is fundamentally superficial. The root cause of what happened during the subprime mortgage bubble and then carried over to the whole global banking system was, in fact, society’s unquestioning faith in financial institutions and the integrity of their record-keeping systems and practices. This unbending faith empowered bankers to manipulate their ledgers, accumulating and reselling assets that had little to no value for years.

The fact that the investment bank Lehman Brothers had posted record earnings of $4.2 billion just nine month before folding at the height of the crisis suggests that the firm’s financial statements were not quite indicative of reality. Even the notion of some undisputable ‘reality’ is precarious in this context — as Casey and Vigna argue — citing Bloomberg journalist Matt Levine — big banks’ balance sheets have grown so complex that even honest accounting became no more than a series of educated guesses about how much the bank’s assets could be worth in the market. It is virtually impossible for a human to know with certainty whether a given bank has made or lost money the previous quarter. In a certain sense, the incumbent bookkeeping system has reached its scalability limits.

Casey and Vigna point out that at the heart of bank accounting there is still the centuries-old practice of double-entry bookkeeping — the one that rests on reconciling debits and credits in the process of asset valuation. ­­­­This system has been an integral part of modern capitalism’s making, and as such, enjoys an enormous amount of knee-jerk trust that we tend to grant to entrenched ‘default options.’ Yet this trust might have been misplaced. In addition to inefficiency, double-entry accounting affords ample ground for manipulation.

While sinking in debt, the notorious Lehman Brothers employed a number of shady tricks to make their books look like the firm was thriving. One of them, according to Casey and Vigna, entailed moving vast amounts of debt off the books at the end of the quarter and temporarily storing it in repo transactions — a tool designed to provide short-term liquidity. Once the embellished quarterly report was in, the debt was returned to the balance sheets. Another scheme exploited the notion of ‘hard-to-value’ assets, as the bank’s accountants assigned random high values to such resources. Essentially, the bank was running two parallel ledgers: one internal, and one public-facing.

If we accept that a lack of transparency, multiplied by a superfluous trust in banks, were the primary drivers of the 2008 crisis — and potentially of the future ones — distributing the banking sector’s ledgers looks like a promising solution. Once every asset’s value and ownership are immutably recorded in a transparent, shared database, corrupt practices — like those of Lehman Brothers — on behalf of individual players will become impractical. As Alex Tapscott observed in his 2016 book Blockchain Revolution, maintaining financial security via increased transparency of capital flows is one of the key areas in which blockchain technology may play its part in avoiding the next big financial disaster.

In Tapscott’s view, central banks or other regulatory bodies will no longer need to go to individual banks to review their operations. Access to a shared record of transactions will allow them to monitor cash flows in real time. Regulators would thus have a clear picture of the overall liquidity and risk distribution, along with a capacity to track an individual firm’s behavior. With such instruments at hand, authorities would no longer need to make guesses about the financial system’s health. Rather, they would have both a macro view of capital flows and early information on specific chokepoints where intervention is needed.

Tapscott also reviewed blockchain’s potential to bolster other areas where financial risks are especially pronounced. Among those, loan fraud is one of the leading causes of ‘bad debt’ proliferation, especially in developing economies. In a future where all borrowers store their personal ID’s in a decentralized database, loan fraud will become a thing of past — at least those schemes that rely on the use of fake identities. Finally, Tapscott believes that widespread adoption of DLT in the financial sector will help eliminate shadow banking from the whole industry — a layer of institutions that acts as a financial intermediary but operates outside of the regulated space.

A radical answer that blockchain might offer to the threat of financial crises lies in the technology’s capacity to redefine the whole global financial system and to make banks — in their current form — obsolete. As Blockchain at Berkeley’s Urvi Guglani predicts in a Medium post, banks — as trusted intermediaries — might fade away within the next two decades. As peer-to-peer networks replace them as a primary trust infrastructure, finance will switch from an asset-backed model to a cash-flow-based model, leaving no room for crises that have faulty asset valuations and underestimated risks at their core. Of course, this doesn’t mean that the new model will be safe from any kind of systemic breakdowns.

All the solutions offered above presume an advanced state of blockchain technology adoption, with all actors in the banking sector — as well as regulators and even individual customers — interacting on a shared distributed ledger. How far is this vision from becoming a reality, and will it certainly play out this way?

While virtually every major bank is involved in developing DLT applications for streamlining back-office processes these days, it is far from granted that their efforts from within will produce an entirely transparent and disintermediated system. The dominant model of industry cooperation in the blockchain space today is a consortium of organizations, seeking to build a common standard of open-source software. The Wall Street-sponsored take on this format is already in place. Called R3, it brings together more than 200 financial firms globally in an effort to build a distributed ledger platform, Corda. 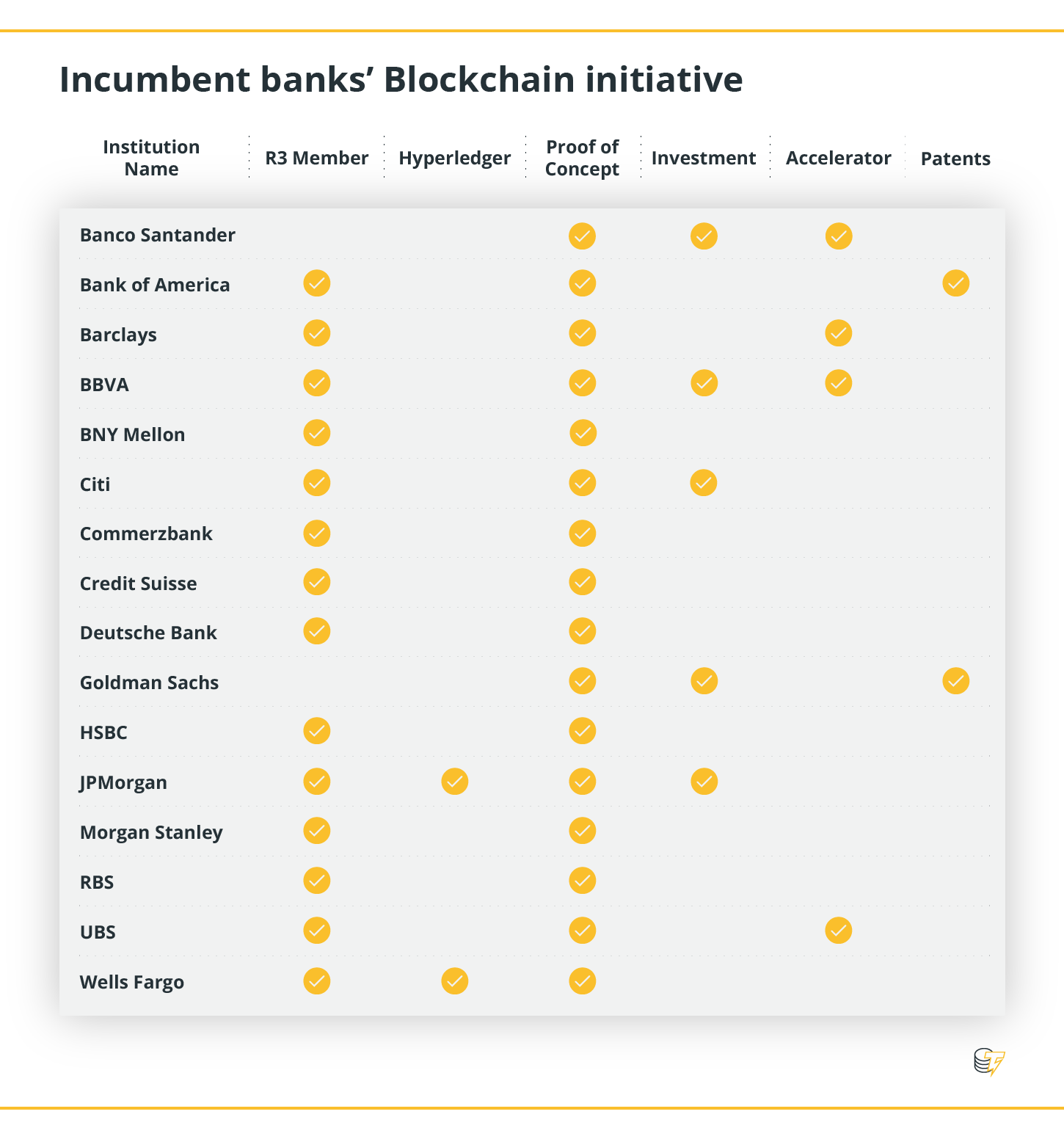 It would be naïve to expect that the world’s top financial firms have pooled their resources together looking solely to create a system that will handle governments and international regulators a precise instrument to monitor them. Or, that the incumbent banks are laying the foundation for a peer-to-peer network that would gradually take over the trust-managing function. Way more plausible is the scenario under which the banks, by getting ahead in the blockchain development race, are aiming to come up with an infrastructure that operates on their terms. Once up and running, it will certainly allow for more accountability and oversight, but it is unlikely to challenge the incumbent gatekeepers’ central role.

There is little doubt that distributed ledgers are poised to replace double-entry bookkeeping as the lifeblood of finance. However, distributed ledgers come in different shapes and sizes, and it is yet to be decided which kind will ultimately take hold. Permissioned blockchains that Wall Street banks are racing to put up will definitely reduce friction in the system and increase the accountability of financial institutions, but they are unlikely to radically alter the existing models of trust management.

The alternative is building a brand new financial infrastructure from scratch — the one that, in the true peer-to-peer spirit, would rely on permissionless ledgers. Such a transformation will require either an enormous political will or a decentralized, global push toward a renewed financial system. Whichever model prevails, we should never idealize the record-keeping arrangement in place and be mindful of the possibility that it might be vulnerable to abuse.