Chee Finance, a multichain lending and borrowing platform for both ERC20-protocol and nonfungible tokens (NFTs) is launching on the Meter mainnet tomorrow.

Chee Finance has been running its testnet since January 19, 2022, with more than 10,000 unique addresses interacting with the testnet.

During the testnet period, the Chee Finance team is constantly improving and developing the protocol, aiming at providing users with a safer, permissionless and easier-to-use money market. The Chee Finance testnet has achieved every feature required for its mainnet launch. 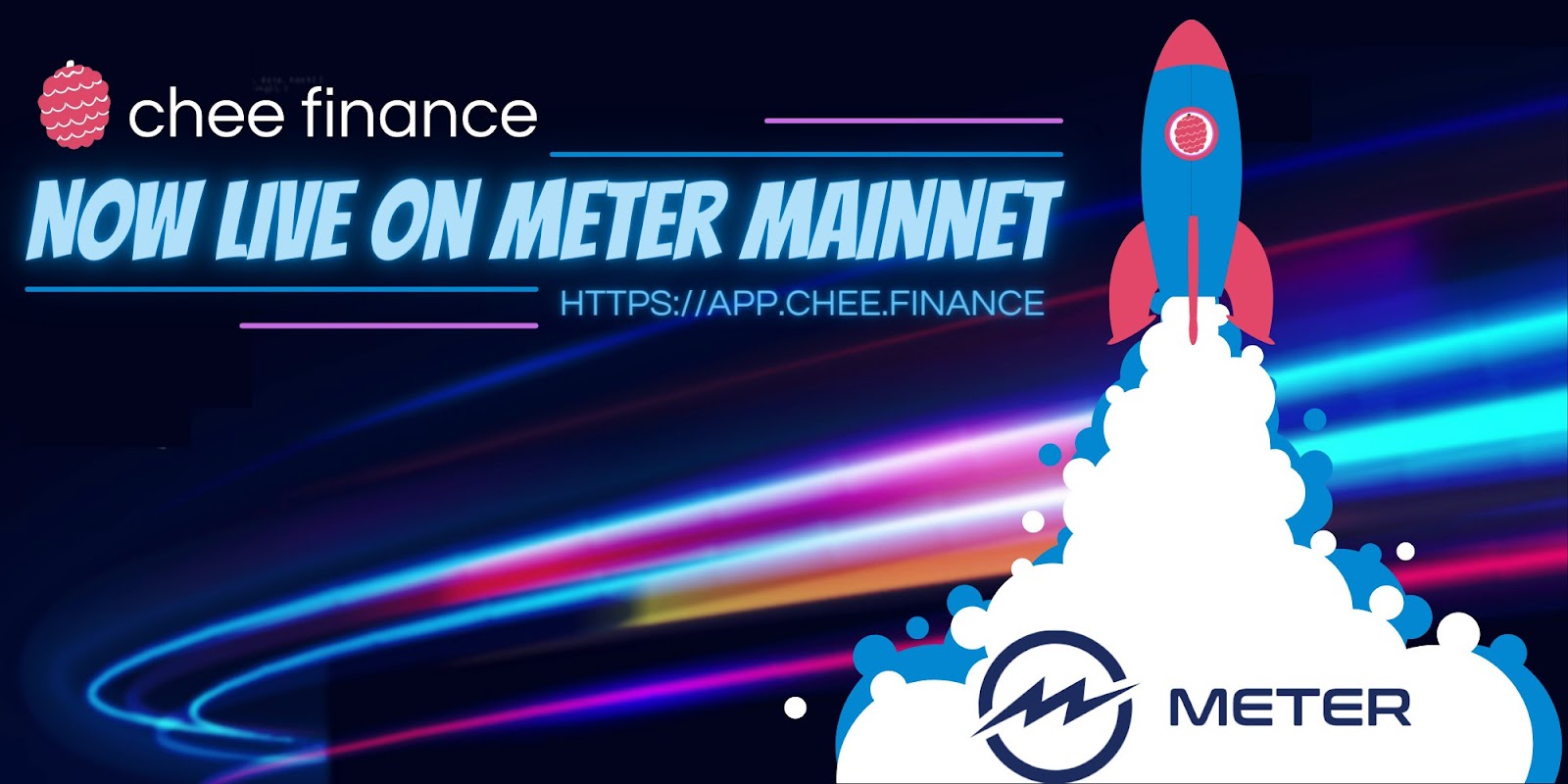 As the grand-prize winner of the Meter Ethereum Hackathon, Chee Finance will be the first lending and borrowing protocol on the Meter blockchain. It is on a mission to enhance the Meter ecosystem by providing a key decentralized financial tool.

The official launch date for Chee Token will also be announced soon.

The mainnet can be visited at app.chee.finance. The first three markets supported on Meter were Wrapped Tether (USDT) and Wrapped USD Coin (USDC) from Ethereum (USDT.eth, USDC.eth) and Wrapped Binance USD (BUSD) from BSC (BUSD.bsc).

More markets, including Meter-native tokens such as Meter Governance (MTRG), will be online once oracles such as Band Protocol and Witnet are running on Meter in the coming weeks.

Chee Finance Bridge is one of the most potent Meter Passport-powered tools. This tool allows users to transfer their Chee Tokens among the supported blockchains, enjoying a more pleasant experience with a permissionless money market.

The bridge can be visited on Chee Finance’s testnet at apptest.chee.finance and will be live on the mainnets after the Chee token generation event.

Vote-escrow NFTs (veNFTs) are ERC-721 protocol-compliant tokens and represent the governance rights of decentralized finance protocols such as voting, boosting and returning staking rewards. The veNFTs represent a significant step forward for the industry. In most decentralized autonomous organizations, governance votes are represented by the number of tokens held in a wallet, but votes are represented by veNFTs in protocols that have them.

Chee Finance will be the first protocol to accept veNFTs as collateral and lend Chee tokens in exchange. Each Chee token will be pegged to the original governance token locked in veNFT as a one-for-one ratio. As a result, veNFT holders can obtain instant liquidity on Chee Finance.

The Chee Finance team will continue enhancing and optimizing the lending-borrowing infrastructure. Many exciting features will be included in future versions.

Some upcoming plans include:

Chee Finance is working with VoltSwap to launch pools, with other exciting features announced in the coming weeks.

It will accept additional types of NFTs as collateral. Aside from veNFTs, it is working on DeFi liquidity provider (LP) NFT support, such as Uniswap v3 LPs.

The lovely lychee-inspired mascot has been widely used in Chee Finance’s community. An NFT collection based on the mascot will soon be released.

To create the best NFT collection with unique use cases, the Chee Finance team is working on a detail-oriented design, key-opinion-leader marketing and integration with the protocol’s current features.

Chee Finance is also working on advanced cross-chain integration with protocols such as Cosmos, Polkadot and bridges such as stargate to achieve a smooth and permissionless lending and borrowing experience.

Meter.io is a highly decentralized Ethereum network-scaling solution with a built-in meta-stable gas currency. It connects to Ethereum and other blockchains as a layer-2 protocol and allows smart contracts to scale and communicate seamlessly through heterogeneous blockchain networks.