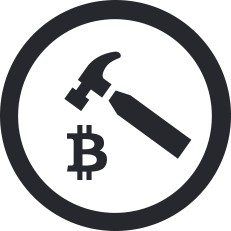 Mining is the process of adding and validating transaction records on the Bitcoin public blockchain ledger while securing uptime for the network. This is how the network persists without relying on trusted third parties using vulnerable, centralized infrastructure. Mining is also used to distinguish legitimate Bitcoin (BTC) transactions from attempts at double-spending, which is when a user attempts to re-spend money that has already been spent somewhere else.

What miners are actually doing is continually guessing for a specific number (the nonce) designated in the header of the following block, which has a predetermined number of zero bits. When they guess the correct number after using extensive computation power, they solve the proof-of-work and are rewarded with the protocol currency, BTC. This simultaneously serves as the minting process for Bitcoin.

Bitcoin mining has come a long way since the network’s launch in 2009. In the early days, mining was how one would participate within the Bitcoin economy, using relatively modest computation resources such as an average consumer-grade laptop to allocate hashing power to solving the proof-of-work algorithm and earn Bitcoin from the block subsidy, all while securing the network.

Since then, mining has become a multibillion-dollar global industry, with massive operations and facilities around the world using incredible amounts of resources to compete for the block rewards of many different cryptocurrencies, all the while providing critical infrastructure and security to these networks.