“6 Months is an Eternity in Crypto” - Jackson Palmer Interview

We had a chance to speak with Jackson Palmer this week about Dogecoin and his plans for the future. 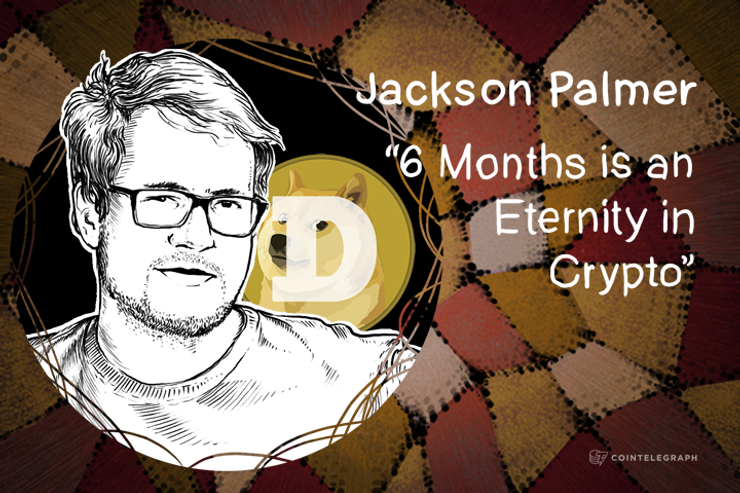 Dogecoin co-creator Jackson Palmer has had a busy 2014. The cryptocurrency he helped create — and that coin’s community — has sponsored Olympic athletes and a NASCAR driver, and its popularity skyrocketed in the spring.

However, a few events have revealed that not all Shibes are the fun, light-hearted types who formed the community’s core. It’s when this ugliness rears its head that Jackson said he takes a step back.

We had a chance to speak with Jackson this week about Dogecoin and his plans for the future.

[Full disclosure: Asynchronous email interviews can hop around thematically because the conversation doesn’t take place in real time. We flipped the last two question/answer pairs in this interview for the sake of logical flow. The content of the questions and answers remain as they were originally given.]

Cointelegraph: You left the /r/dogecoin community in late June. Was there a certain event or point when you thought that community turned a corner, so to speak, and became less fun for you to engage with?

Jackson Palmer: There's a bit of a misconception that I "left the community," when I actually didn't; I'm still actively involved in Dogecoin. This coming weekend, I'm judging a Dogecoin hackathon in San Francisco, for instance, called Hackadoge.

I did step away from the /r/dogecoin subreddit for a bit, as I felt it was getting really toxic over there. Reddit communities sometimes go down that path, unfortunately, as people get on power kicks and start acting like they run the place. My general policy with Dogecoin is that I'll only be involved while it's fun and light-hearted. The second people start throwing around legal action and acting high and mighty over a dog on a coin, I peace out and move onto something worth my energy.

CT: How are you working within Dogecoin now?

JP: I'm not actively involved in the development of the coin anymore. There's a core team that I handed over to there. I'm more involved holistically in the digital currency space and help with community outreach on behalf of Dogecoin, such as this interview.

Basically, if there's something to do with Dogecoin that's about having fun or supporting a great cause, then I'll be involved. If it involves people just wanting to get rich off cryptocurrency, or politics, then I tend to take a back seat.

CT: How about plans for the future — do you have any upcoming ideas or projects you would like to pursue?

One of the biggest challenges digital currency faces is bringing about mainstream adoption in a world full of consumers who are quite perfectly happy using their Visa card to transact. It's about education and awareness, that's my passion.

CT: Are there any other groups/coins/companies putting a friendly face on cryptocurrencies (as Dogecoin literally did) that you imagine will help achieve greater mainstream adoption of the technology?

JP: There are a ton of exciting altcoins out there exploring possibilities for where cryptocurrencies can head. The proof of file storage / retrievability systems are really interesting to me, as they replace the PoW reliance with computational resources that actually benefit folks. A decentralized Dropbox really excites me.

Altcoins are a great testbed and way to explore what the future might hold for digital currency. That's why I love being in this space.

CT: How do you imagine the rest of 2014 plays out for Dogecoin, Bitcoin and cryptocurrencies in general?

JP: I have a personal policy that I don't make predictions in the crypto space. When I first tweeted about Dogecoin late last year, I could never have guessed that just six months later we'd be where we are now, having achieved everything we have.

Six months is an eternity in crypto, and anything can happen. Anything.

- doge is dead by cicerothedoge