Binance has chosen to delist its FTX leveraged token products.

“Due to lack of understanding of how leveraged tokens work by many of our users, Binance has decided to delist all existing FTX leveraged tokens and corresponding trading pairs,” the exchange announced on March 28.

Binance will shut off deposits and withdrawals for the assets on March 31 at 8 a.m. UTC, with a stoppage in trading at 10 a.m. on the same day.

On March 11, Binance announced its listing of two FTX leveraged ERC20 tokens, known as BNBBULL and BNBBEAR. Customers could trade these assets against USDT or BUSD, Binance’s own stablecoin.

“Users can buy leveraged tokens just like normal tokens on a spot market,” Binance said in its March 11 announcement. “However, there is no need for them to manage collateral, margin, liquidation prices, or anything that a normal margin user needs to manage.”

A quick press time scan also showed several other available bull and bear pairings, such as EOS, ETH and XRP, as well as a simple “Bull” and “Bear” option paired against USDT and BUSD. 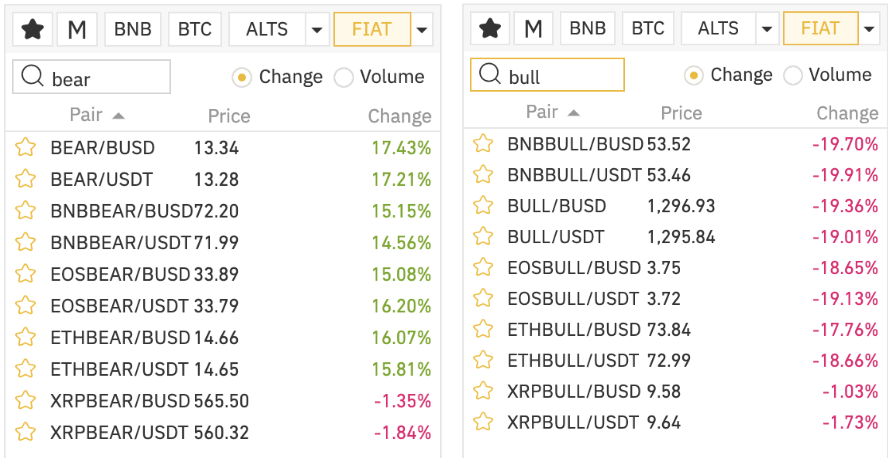 The exchange included both USDT and BUSD pairings in the delisting.

Binance’s work with FTX comes after the crypto giant made an equity investment in the crypto derivatives platform back in December 2019. Binance also bought a stake in the platform’s FTX token.

Cointelegraph reached out to Binance for additional details, but received no response as of press time. This article will be updated accordingly should a response come in.