Bitcoin is not out of the woods after a wild weekend selloff and risks more downside as the much-anticipated BTC halving event is about to pass.

The price of Bitcoin (BTC) touched $10,000 last week but crashed more than $2,000 from Saturday to Sunday as the price hit $8,100. Is the halving hype over a la “buy the rumor, sell the news” for the top-ranked cryptocurrency?

The halving is less than twelve hours away, so what can be expected from the markets with that event happening? 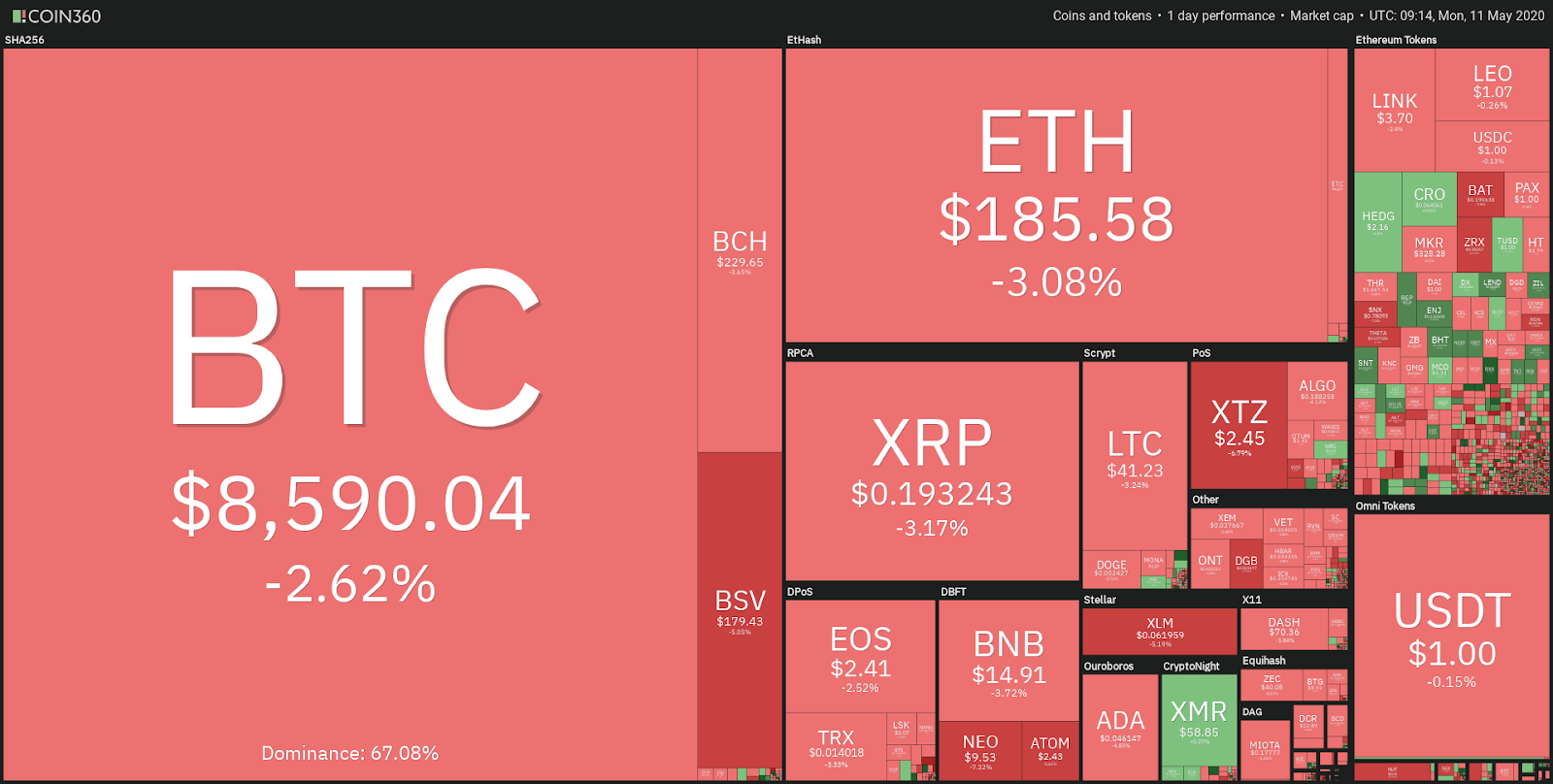 The price of Bitcoin crashes to $7,900 after halving?

Unfortunately, this seems the most likely cause. The halving is usually a classic example of the “sell the news” concept when investors buy into the event, expecting it to have a bullish outcome.

However, once the event passes and realization starts to kick in, the price retraces towards its equilibrium, leaving late-comers with a loss. 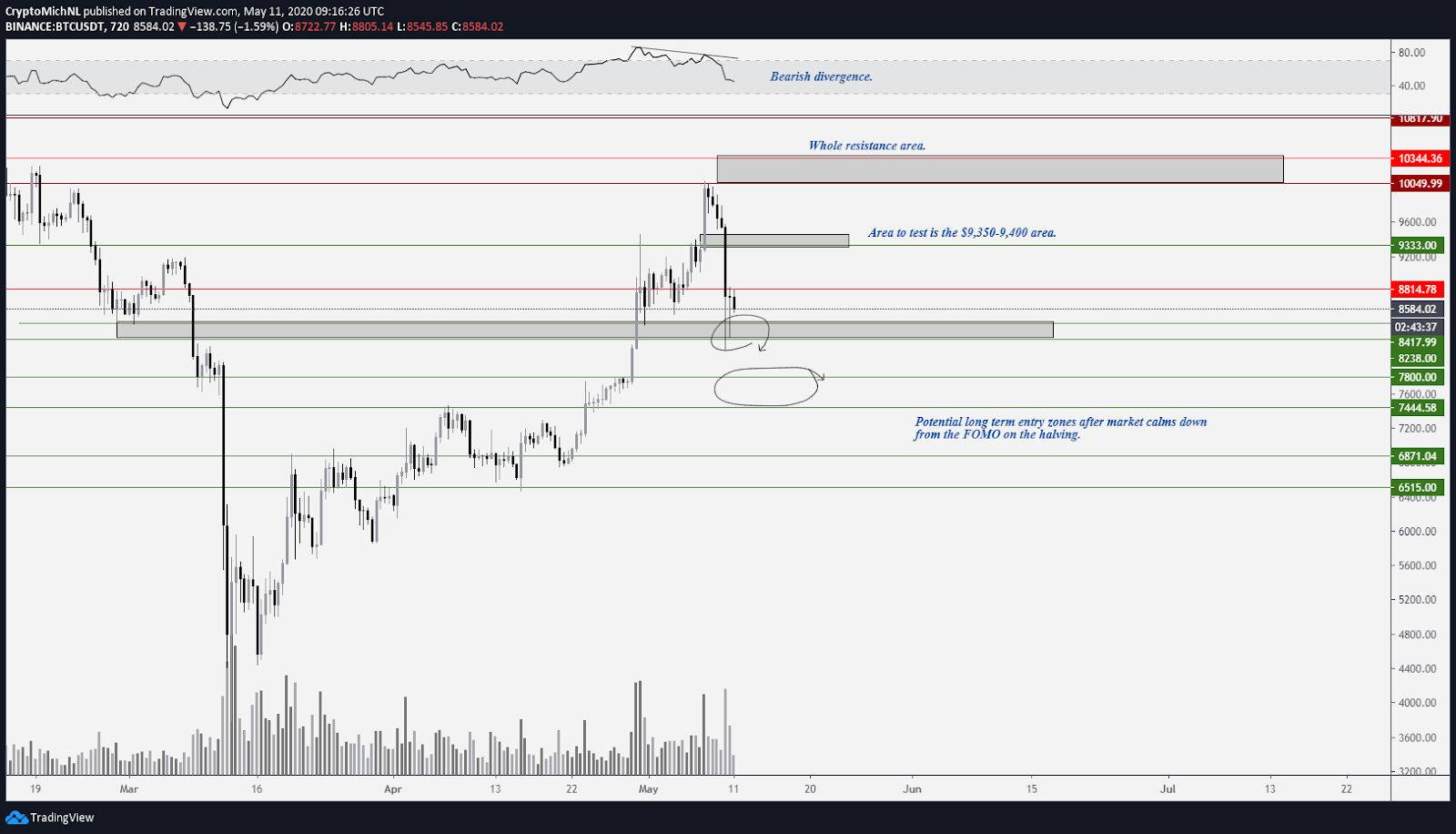 In the previous article, I’ve stated that the $9,350-9,400 area was a crucial level to hold for any further upwards momentum. However, the price of Bitcoin couldn’t hold that level, resulting in a cascade of stop/loss triggers and liquidations. This cascade caused the price of Bitcoin to drop by nearly $2K to $8,100.

But how could this happen before the halving even happened?

If we go back in history, the previous halvings had a similar structure. Not only for Bitcoin, but the same can also be said for Litecoin (LTC), the seventh-ranked cryptocurrency by market cap. For all of those halvings, the peak high occurred before the event took place. 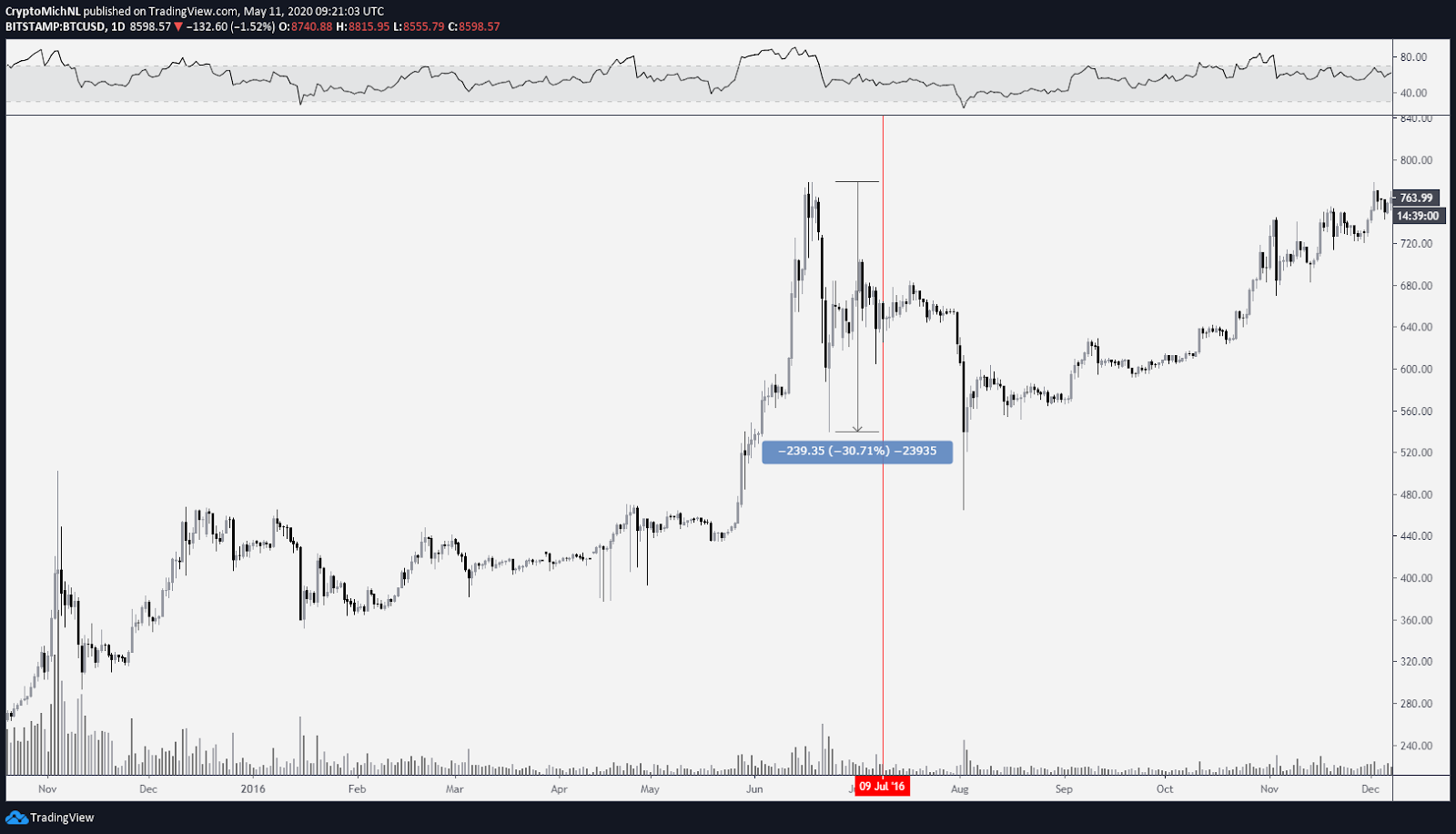 The previous halving of Bitcoin in 2016 has a similar structure. However, it must be stated that it occurred in a fairly more robust uptrend than the current halving. As the chart is showing, the peak of the price during this halving occurred a few weeks before the event (June 2016).

And similarly to the current example, the price of Bitcoin crashed heavily going into the event as the price dropped from $763 to $525.

Another vital aspect to see is that during the actual halving, the price barely moved and just continued ranging afterward.

Is such a retrace bad? No, the market has seen an increase of more than 160% in a matter of seven weeks. Retraces and corrections are more than healthy for sustainable growth. Especially when the hype around the halving passes, consolidation and correction are likely, bringing the price of Bitcoin back towards equilibrium. 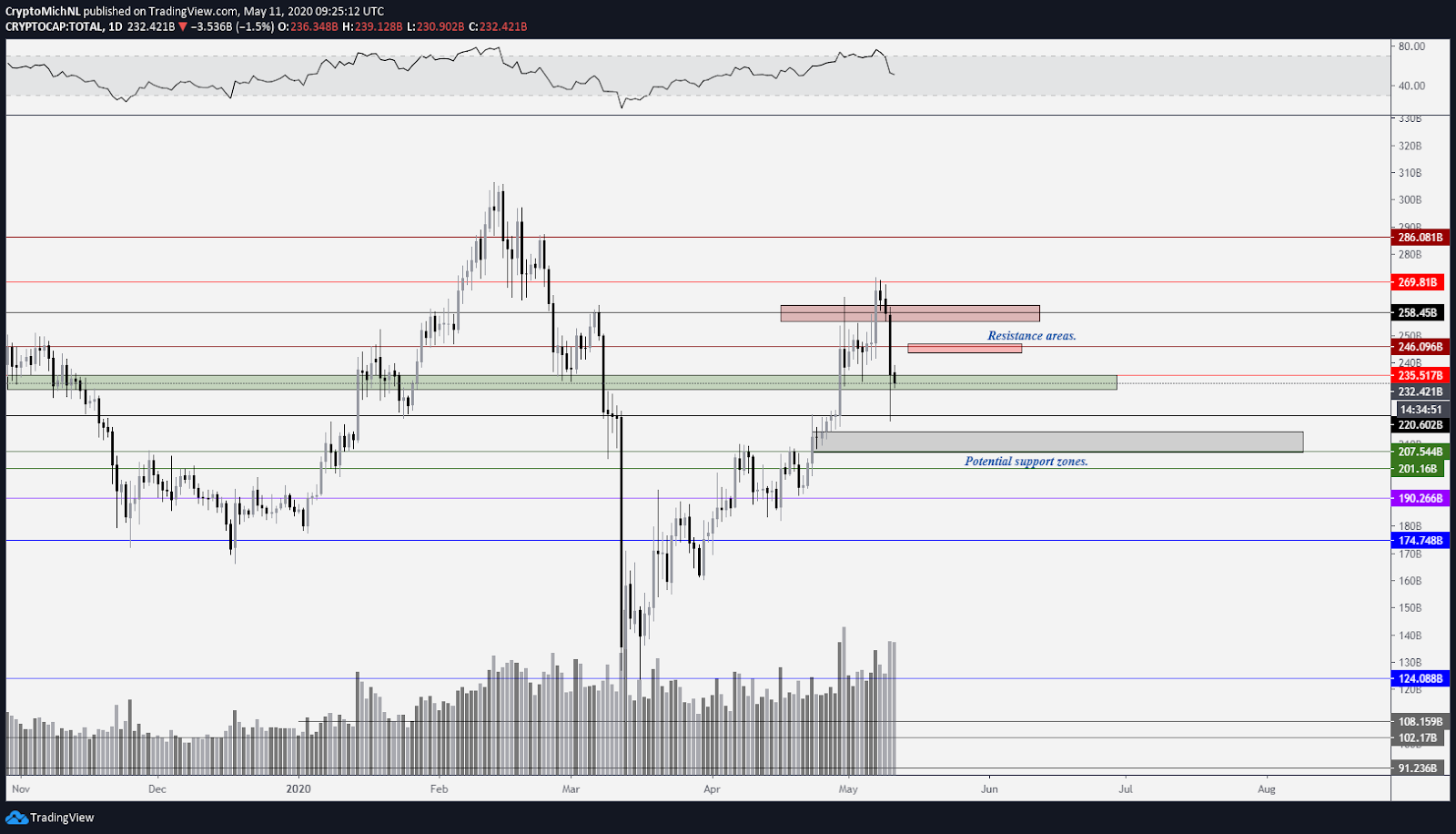 The total market capitalization of cryptocurrencies is showing a breakdown below $258 and $246 billion. That’s unfortunate, as it looks like we have a trend reversal here, which will see lower levels tested before continuing upward.

The short-term expectations are similar to Bitcoin with a potential test of the $246-250 billion possible as the total market capitalization dropped 19% in a matter of hours. If $246-250 billion confirms as resistance, further downward momentum is likely.

The potential levels to watch for support are then $220 and $205-210 billion as marked in the chart. 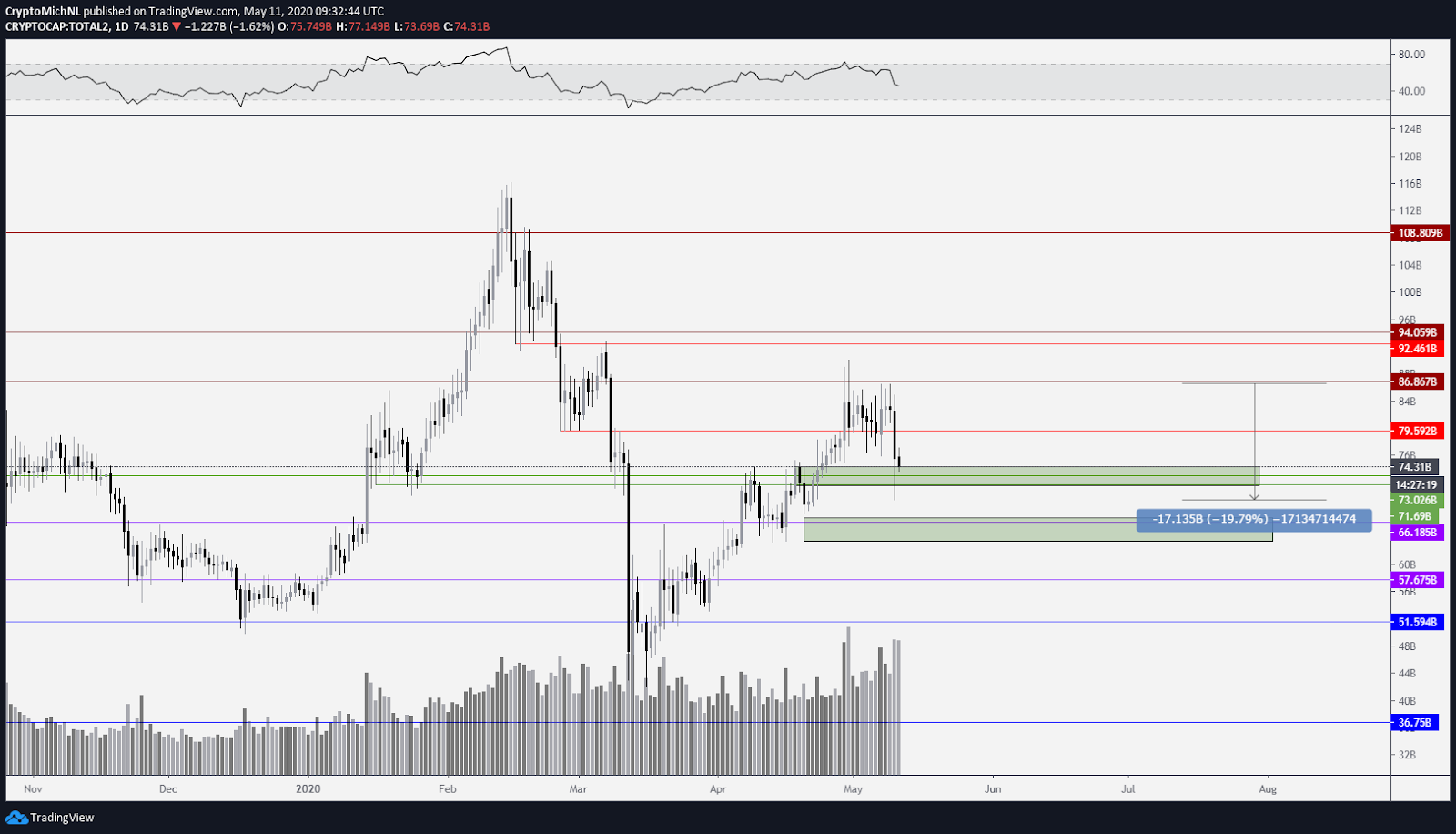 The altcoin market cap has seen a selloff of 19% as well. That’s interesting as the altcoins’ drop is equal to the decline in the total market capitalization. This means that altcoins have been showing strength in their Bitcoin pairs.

Typically, altcoins see bigger drops than Bitcoin, which means that the altcoin market cap should drop more than the total market cap.

In this case, the Bitcoin pairs were bouncing up and stabilizing, while Bitcoin saw a significant selloff. This could indicate that altcoins may gain momentum in the coming months as the Bitcoin halving hype dies down.

The altcoin market cap is currently resting on a critical support level, which is between $70-73 billion. If it holds this level, a potential test of $80 and $86 billion are on the table.

However, if the altcoin market cap drops below this support, a further test of $65-67 billion is likely. 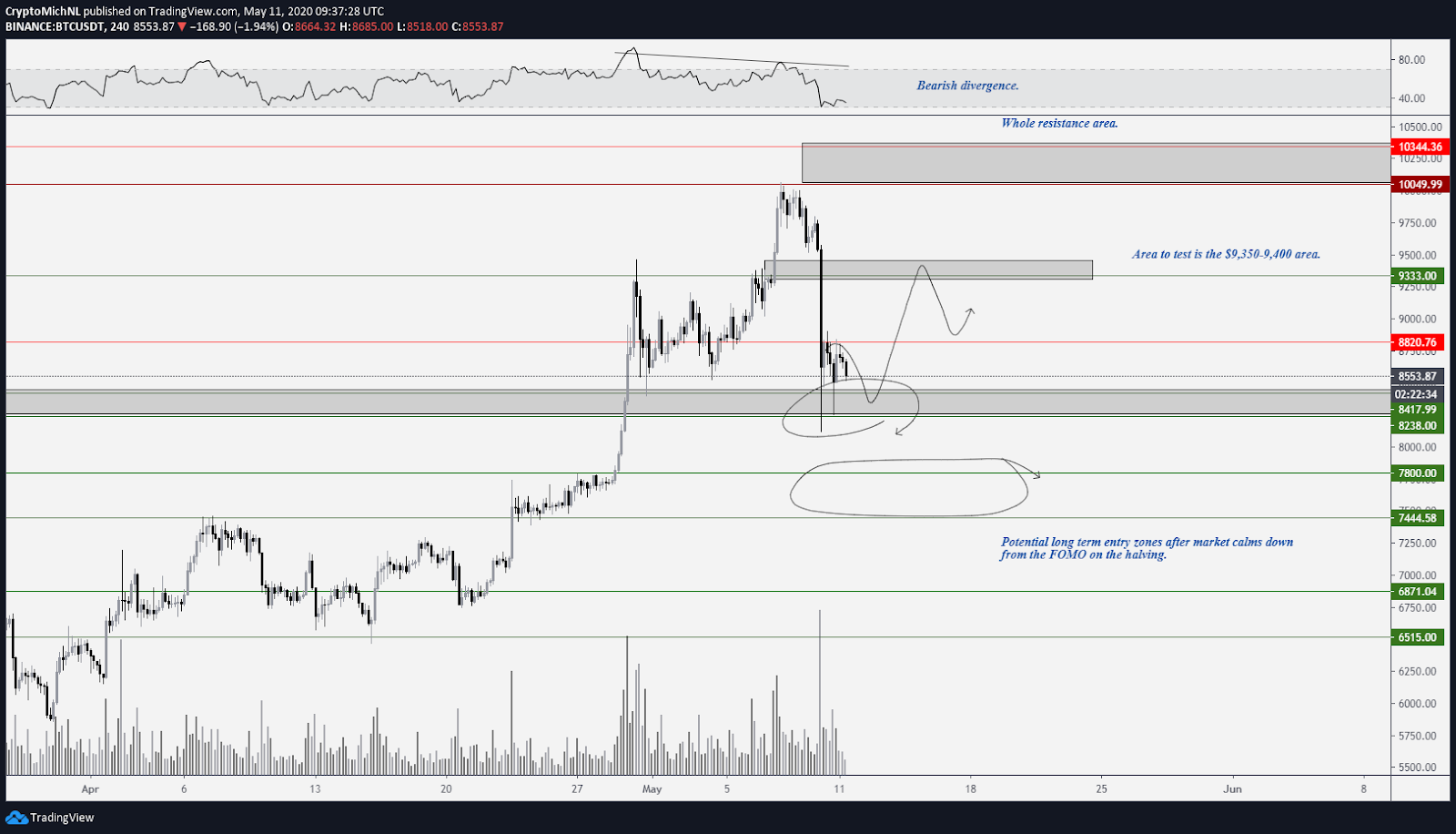 The bullish scenario is clear. The area to hold for the price of Bitcoin is the $8,200-8,400 level. As long as that level remains support, potential upwards tests can occur.

The next hurdle to take would be the $8,800 resistance area as that’s been providing resistance since the crash took place. Breaking through that resistance level opens the door toward $9,300-9,500.

The sentiment is crucial in the market, however. The past week the majority has been anticipating a further upward move towards $11,000+. However, now the expectations are shifting toward a test of the $6Ks. Thus, a potential push to $9,300-9,500 is more likely to occur than further downward momentum.

But with the halving imminent, volatility and wild swings to trap traders can certainly take place. 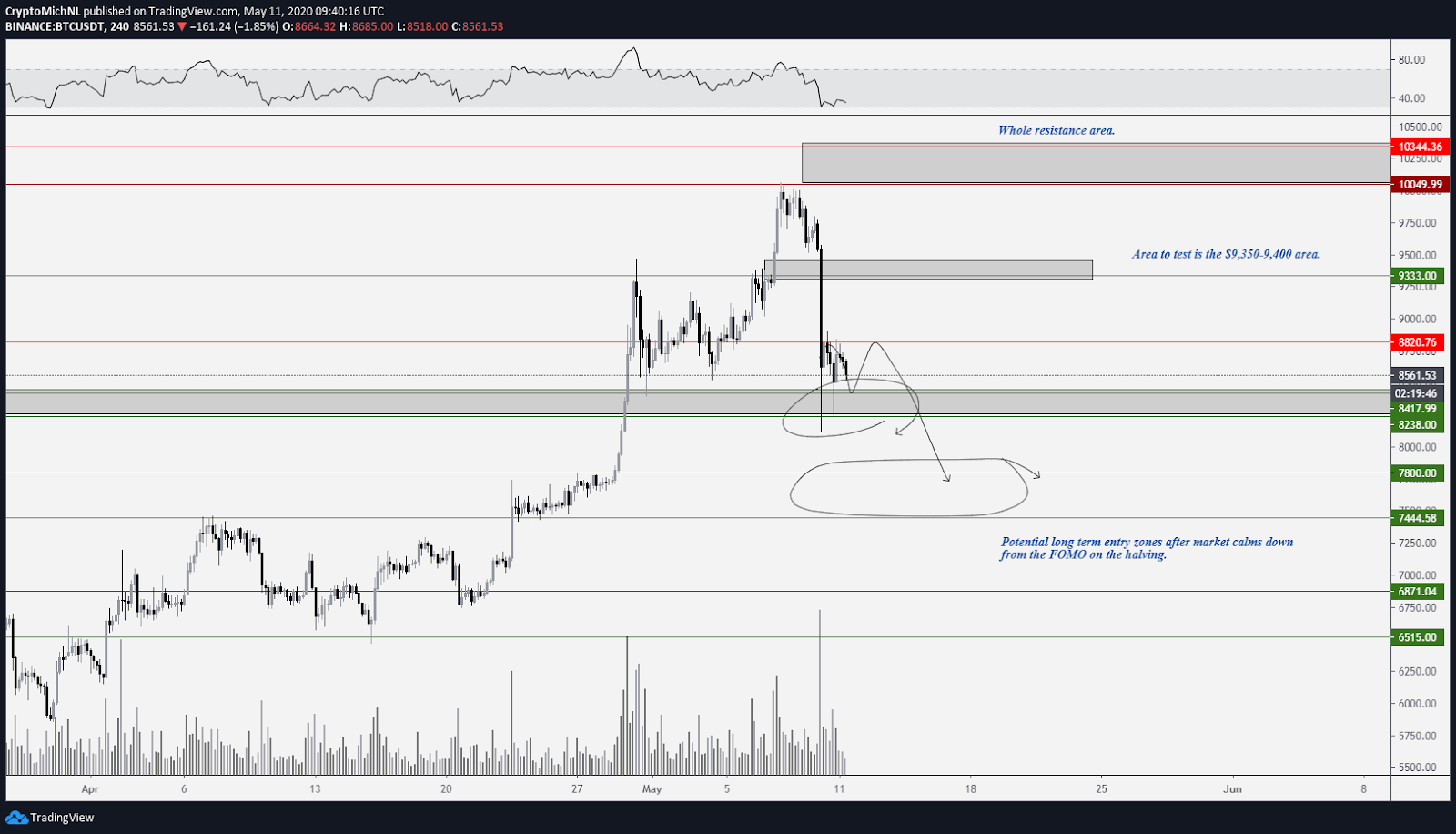 Once the price of Bitcoin can’t break above $8,800 (as that’s the current resistance), further downwards momentum is warranted.

So what can be expected from the markets going into the halving? Volatility, as mentioned already. But it also wouldn’t be out of the ordinary for Bitcoin if an upward move surprises the shorts after a big drop already took place.