Bitcoin Price Consolidates Below $10,000 After Halving: What’s Next?

Bitcoin price is holding below $10,000 after the halving as the bullish and bearish scenarios are starting to take shape.

The halving is over, which means that the hype and FOMO around the halving are slowly fainting away. The price of Bitcoin (BTC), the top-ranked cryptocurrency by market capitalization, rallied towards $10,000 pre-halving, but also produced a 15% crash pre-halving.

While the majority expected a drop post-halving to occur, the price rallied from $8,400 to $10,000. What can be expected with the price of Bitcoin in the coming period?

Bitcoin price rallies to $10,000 to close the CME gap post-halving

The price of Bitcoin crashed by $2,000 to $8,100 pre-halving, which created a CME gap over the weekend. While the majority of the investors and traders anticipated a drop to occur post-halving, the opposite happened. 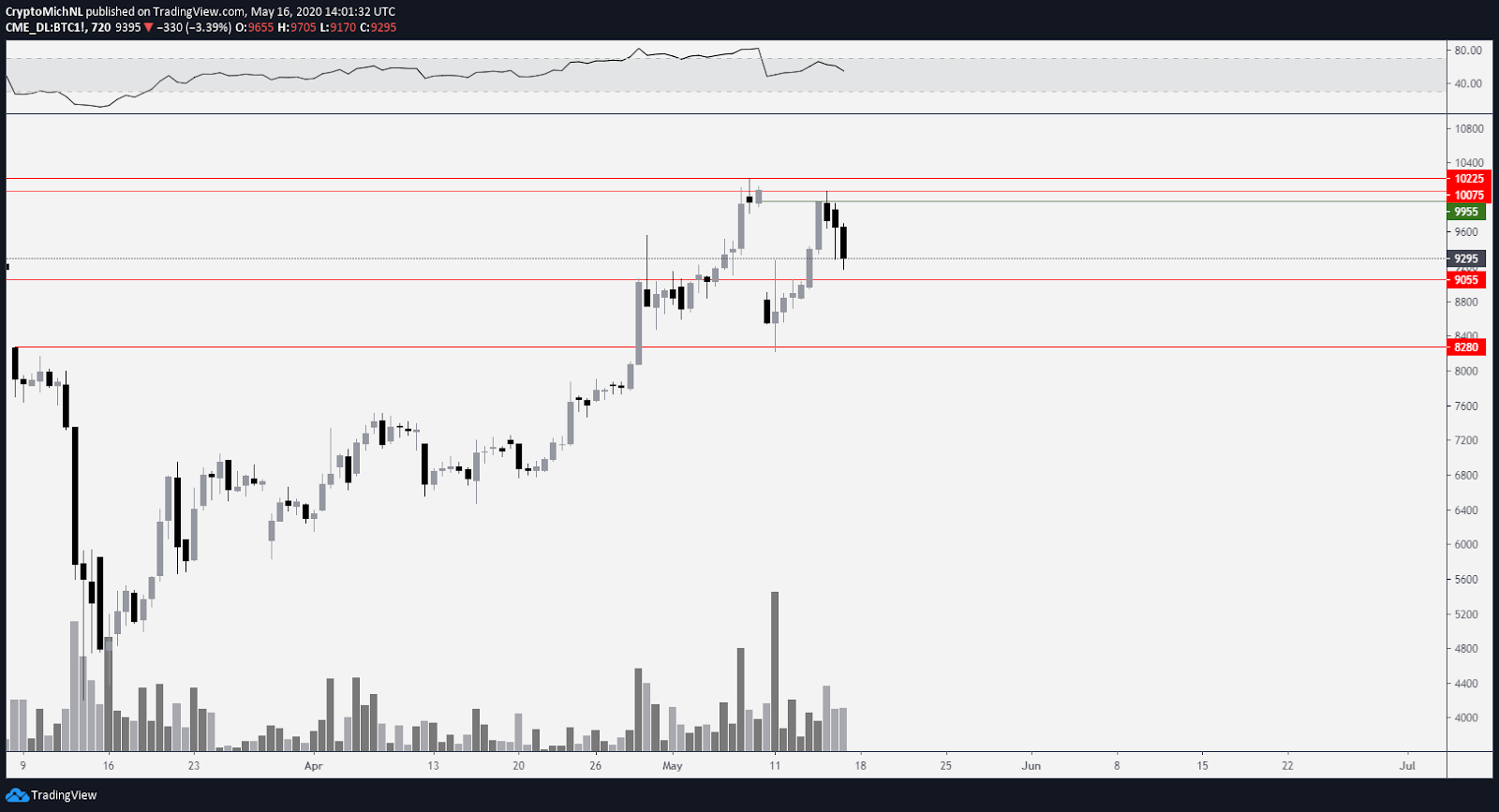 The price of Bitcoin rallied post-halving, which immediately led to a close of the CME gap at $10,000. The CME gap marked the top of this post-halving rally defining a clear range for the markets. 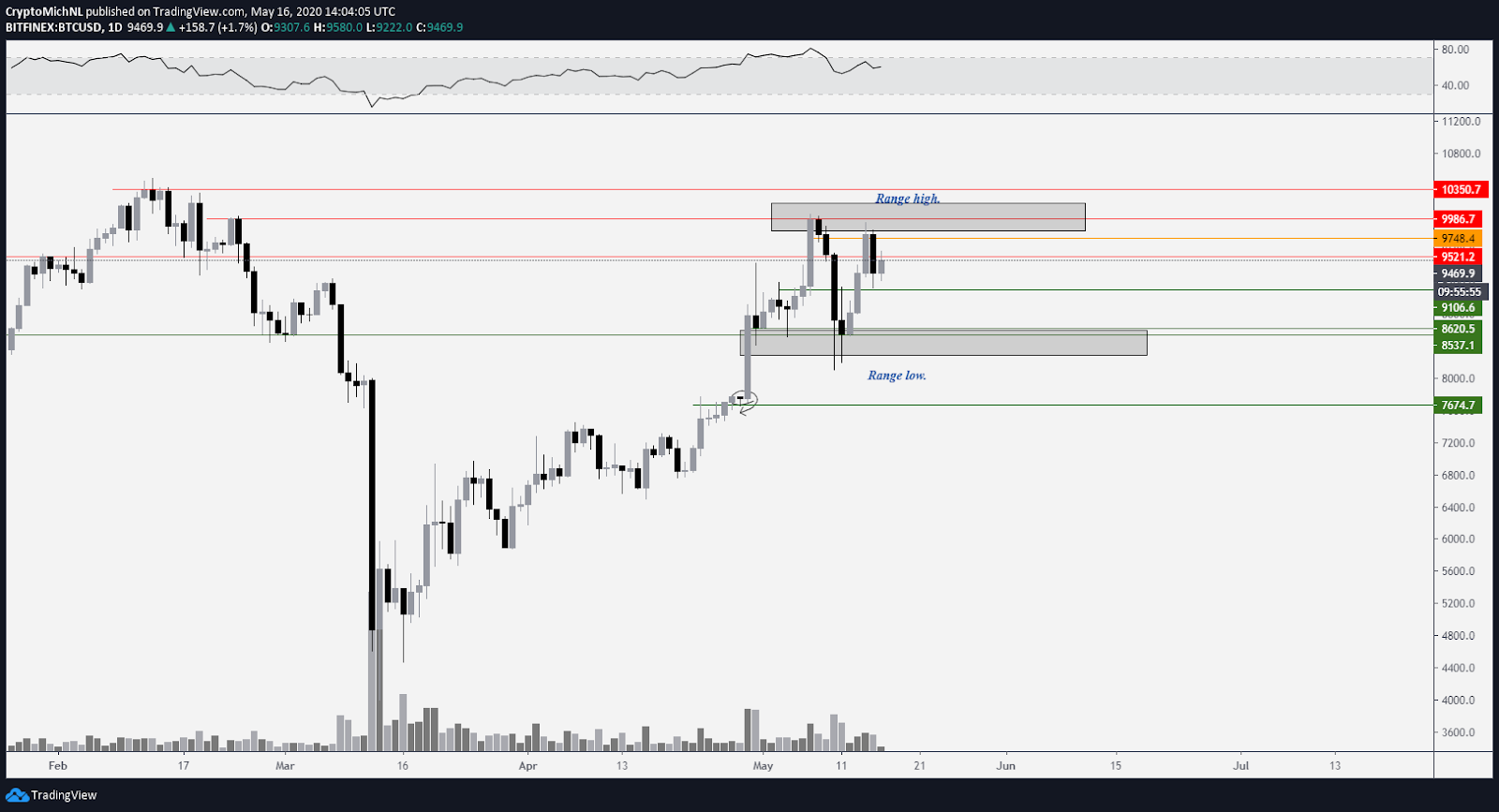 The structure is clear. Support levels (called the range low) are found between $8,250-8,500, where the price of Bitcoin immediately bounced back. The daily candles closed above $8,500, which show that the interest is definitely in this zone.

The resistance levels are between $9,800-10,100, through which the price of Bitcoin wasn’t able to break.

Everything in between these levels can be defined as the range for the coming period. Given that the hype around the halving is passing by, it can be expected that the volatility of Bitcoin price is also decreased. 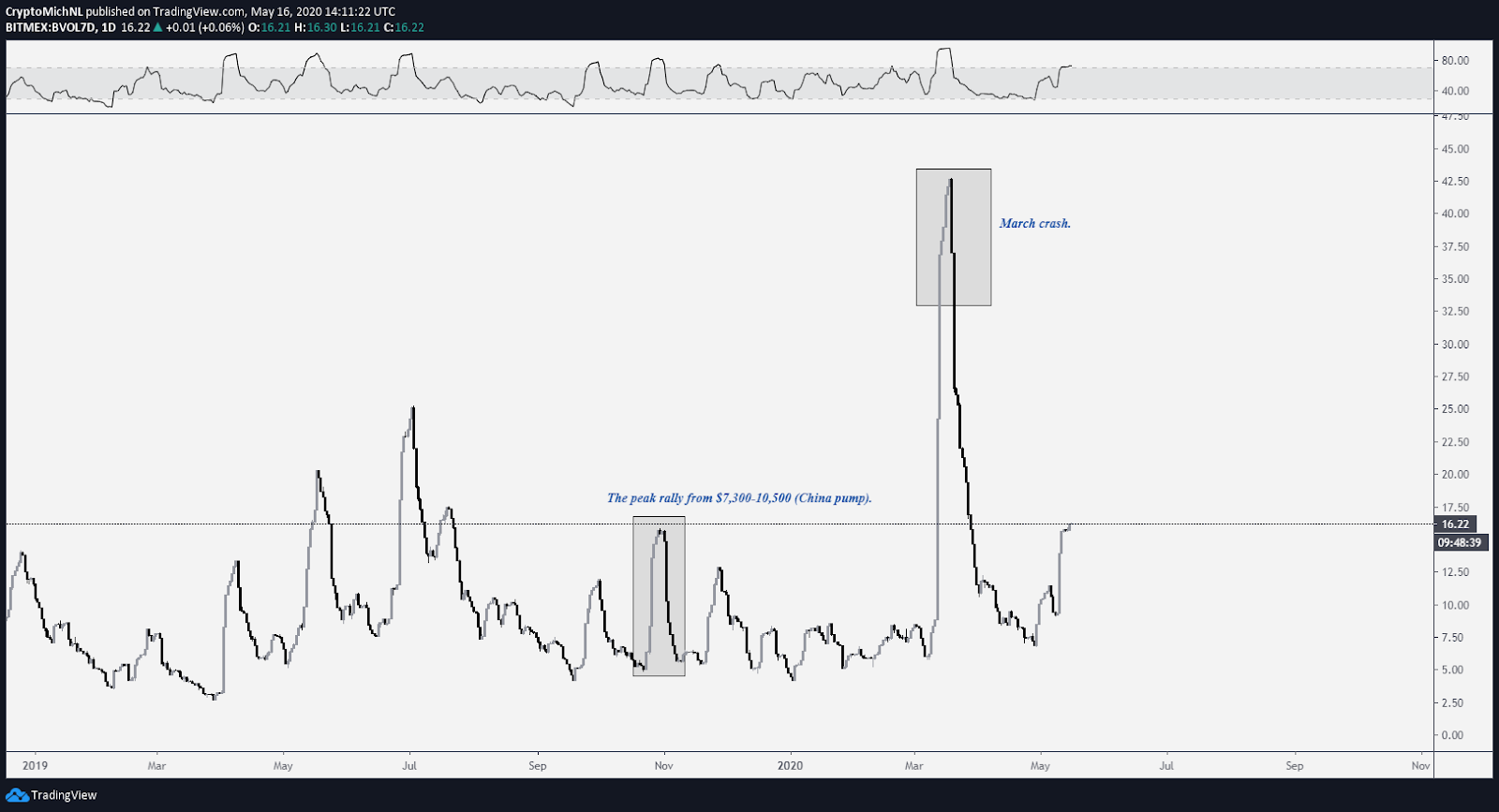 Similarly, the recent volatility in Bitcoin is comparable to the volatility during the surge in October 2019. This surge occurred from $7,300 to $10,500 and was caused by news from China.

Usually, this type of volatility slowly drains away afterward, which stabilizes the price. This is reasonable as the price needs to stabilize on a higher level before any new surge. Combining that with the hype around the halving, it wouldn’t be surprising for the price to stabilize in the coming weeks.

Bitcoin stabilized post-halving in 2016 as well 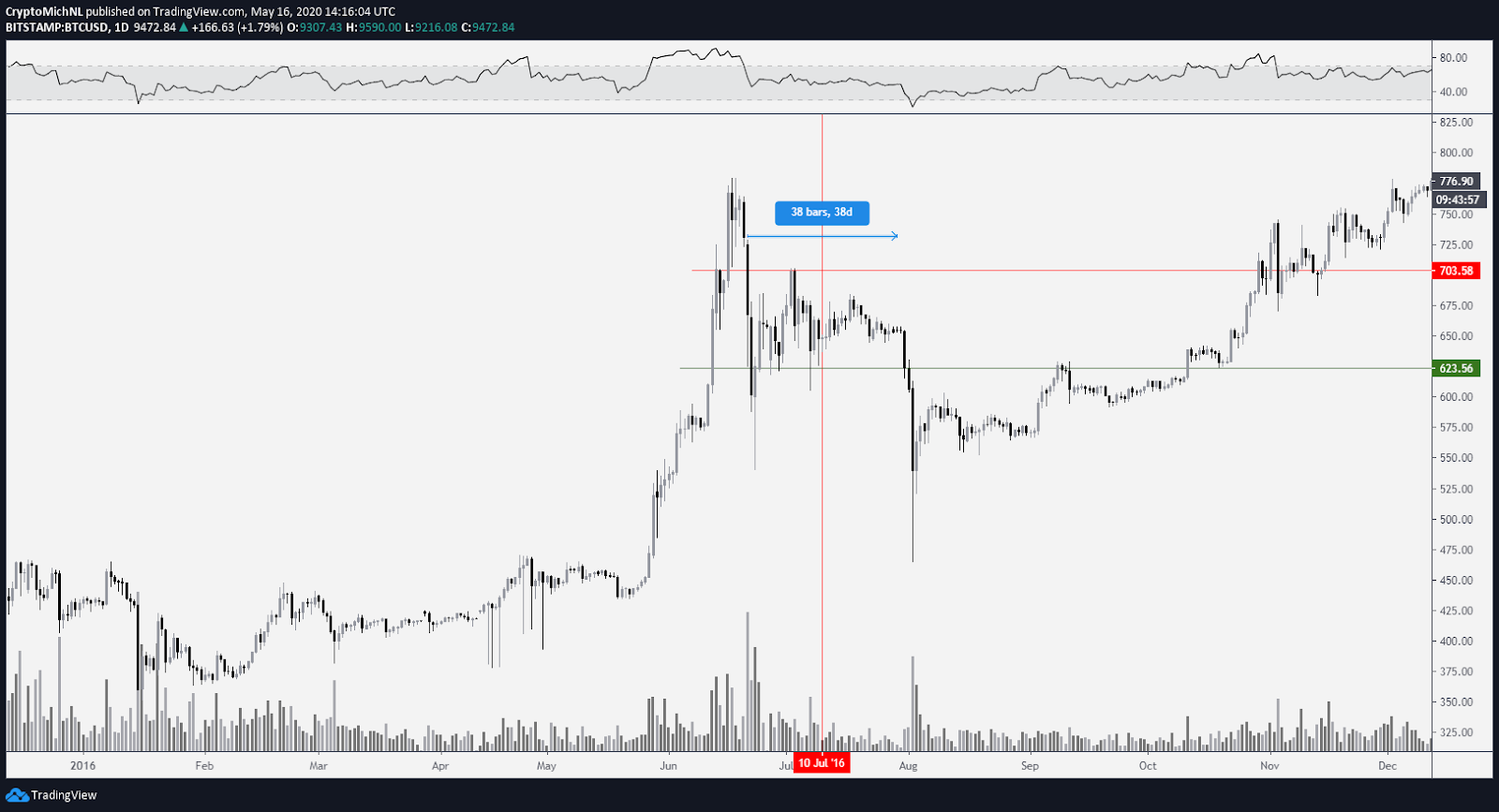 The previous halving has many similarities with the current halving. Worth noting, the last halving occurred in a different market, so there are differences to the recent halving. However, markets tend to move in similar cycles due to market and human psychology.

What’s so similar? The halving caused the price of Bitcoin to rally from $425 to $780, after which a 30% crash occurred before the halving. That move is quite similar to the recent halving. The price of Bitcoin broke through $7,700, which caused a marketwide selloff on altcoins and a rise in BTC price to towards $10,000.

However, a few days before the halving, the price crashed while the actual halving event saw little volatility. This is similar to the halving in 2016 when the price of Bitcoin continued to stabilize inside a range for more than a month after the halving as the chart shows.

Why is that? Well, the halving hype went away, and reality kicked in. A final drop occurred, which made the price revert back to the mean.

Total market capitalization holding the 100 & 200MA on the daily timeframe 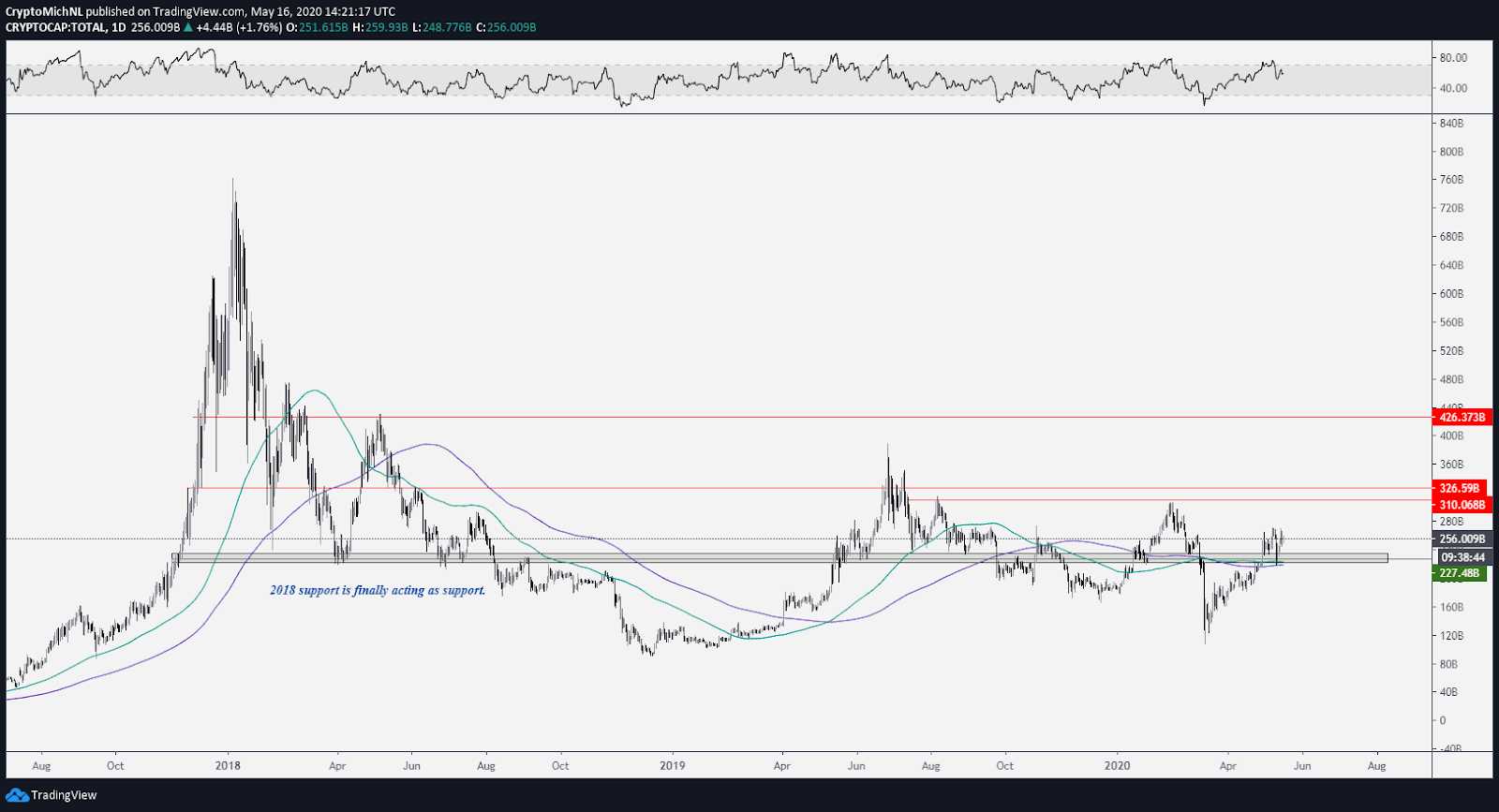 Remember how Bitcoin was stabilizing at $6,000 in 2018? Exactly. The price of Bitcoin is currently 58% higher, while the total market capitalization is just above the 2018 support.

This is opening up an opportunity for altcoins. With the Bitcoin halving hype out of the way, altcoins can now follow BTC in its recent rise. What’s more important (aside from flipping the 2018 level for support) is the usage of the 100 and 200-Day moving average (MA) as support. 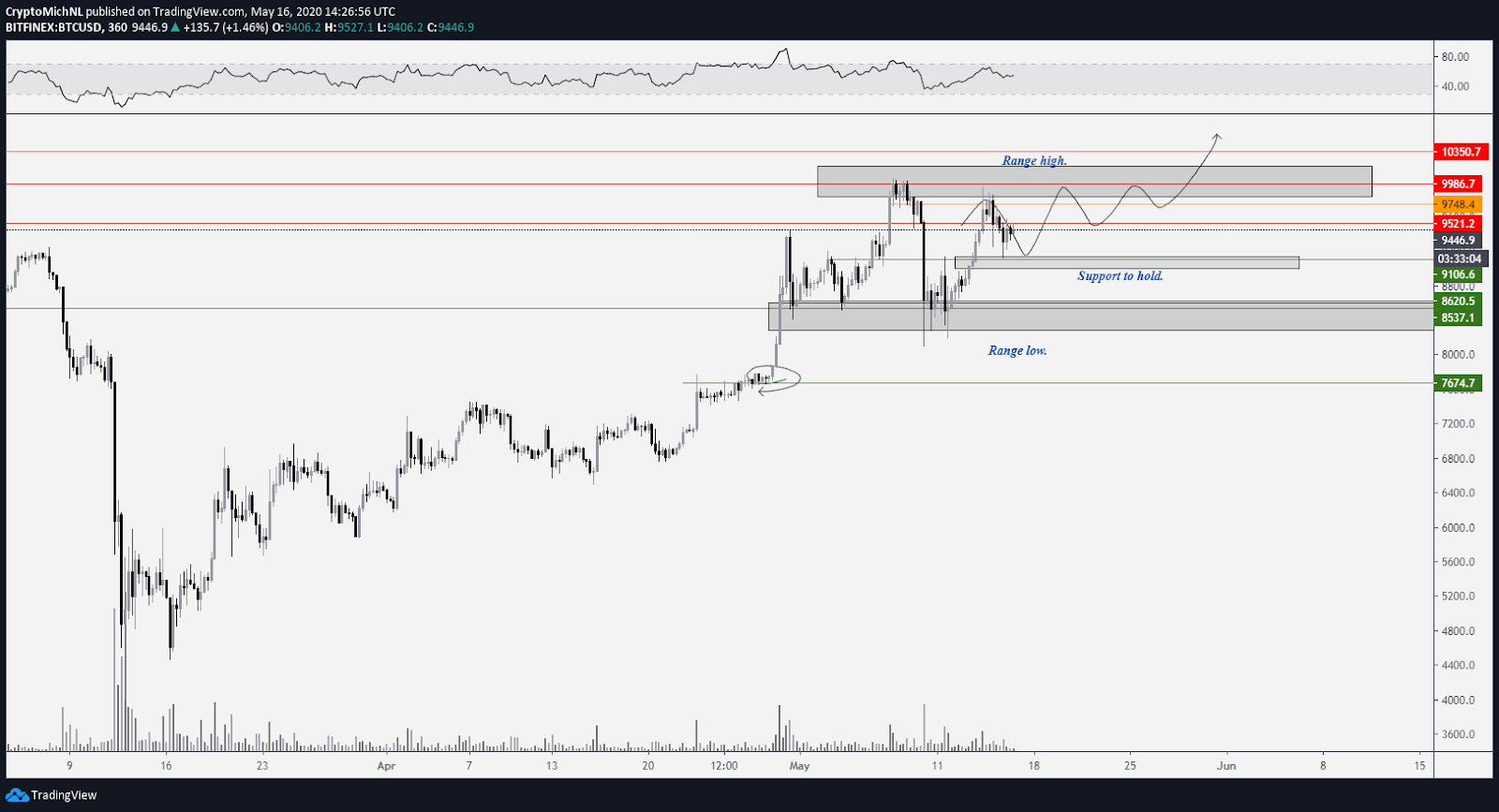 Can Bitcoin escape this range? Absolutely. The chart above is showing the continuation of the upward trend while expecting massive dropdowns right now is unlikely.

Preferably, for a bullish continuation, the price of Bitcoin needs to hold the $9,000-9,100 level as support. If that happens, and Bitcoin can test the resistance a few more times, the resistance will become weaker. 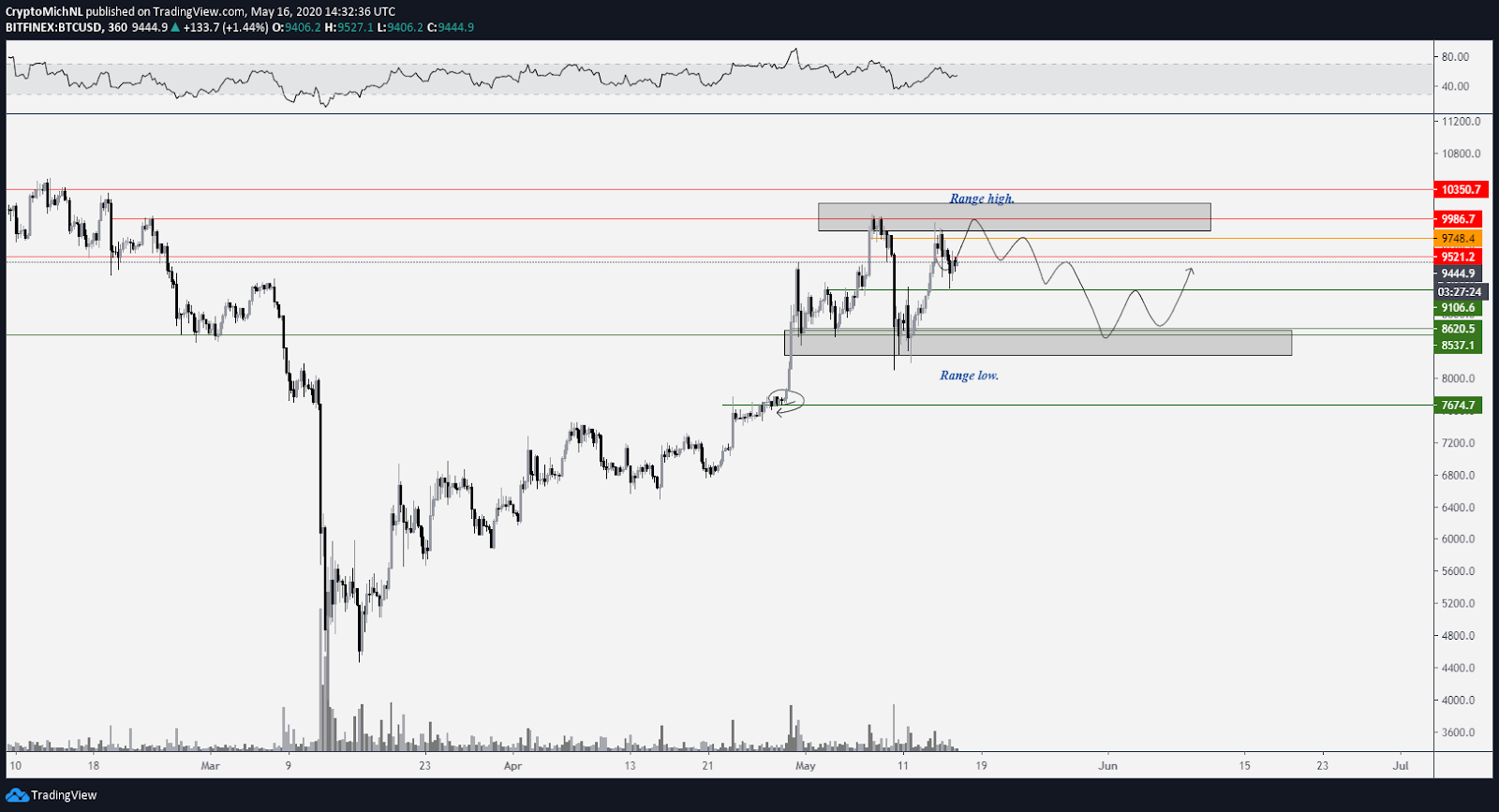 The bearish scenario isn’t really a bearish scenario. It’s more of a healthy retrace inside a bullish structure. However, it can be classified as bearish in the short-term.

Here, the price of Bitcoin may see one more rally towards $9,800-10,100, which triggers another rejection. If such a move occurs, it can be expected that the price will retrace towards the support of this range, which is the $8,250-8,500 level. That’s not a bad sign and can be interpreted as a healthy retrace.

Overall, the second, bearish scenario may be more likely than a bullish continuation, as the Bitcoin halving is over, and the market is reverting back to equilibrium.