For a change, Bitcoin price held steady at $5.3K as equities markets dropped to 2017 levels over continued fears of the Coronavirus and its economic impact.

Yesterday was another abysmal day for the S&P 500 and Dow as both markets dropped 5.18% and 6.30%, nearly erasing the entirety of the gains each market accrued since Donald Trump took office on January, 19, 2017.

To date, the unrelenting downturn in equities markets continues even as the Trump Administration attempts to calm the public by holding daily press conferences at the White House which are headed by the Coronavirus Task Force.

Earlier in the day U.S. lawmakers approved the Coronavirus relief bill which when signed by the president will provide furloughed American workers with up to two weeks of paid sick and family leave, along with free COVID-19 testing for those showing symptoms related to the virus.

Meanwhile, volatility indexes like the VIX, TVIX and UVXY soared to new highs not seen since the 2008 financial crisis. What is clear is that market participants remain fearful of the long-term effects of the current economic shutdown and investors are beginning to get the sense that the COVID-19 crisis will not be cured by quantitative easing, rock bottom interest rates and massive corporate bailouts. 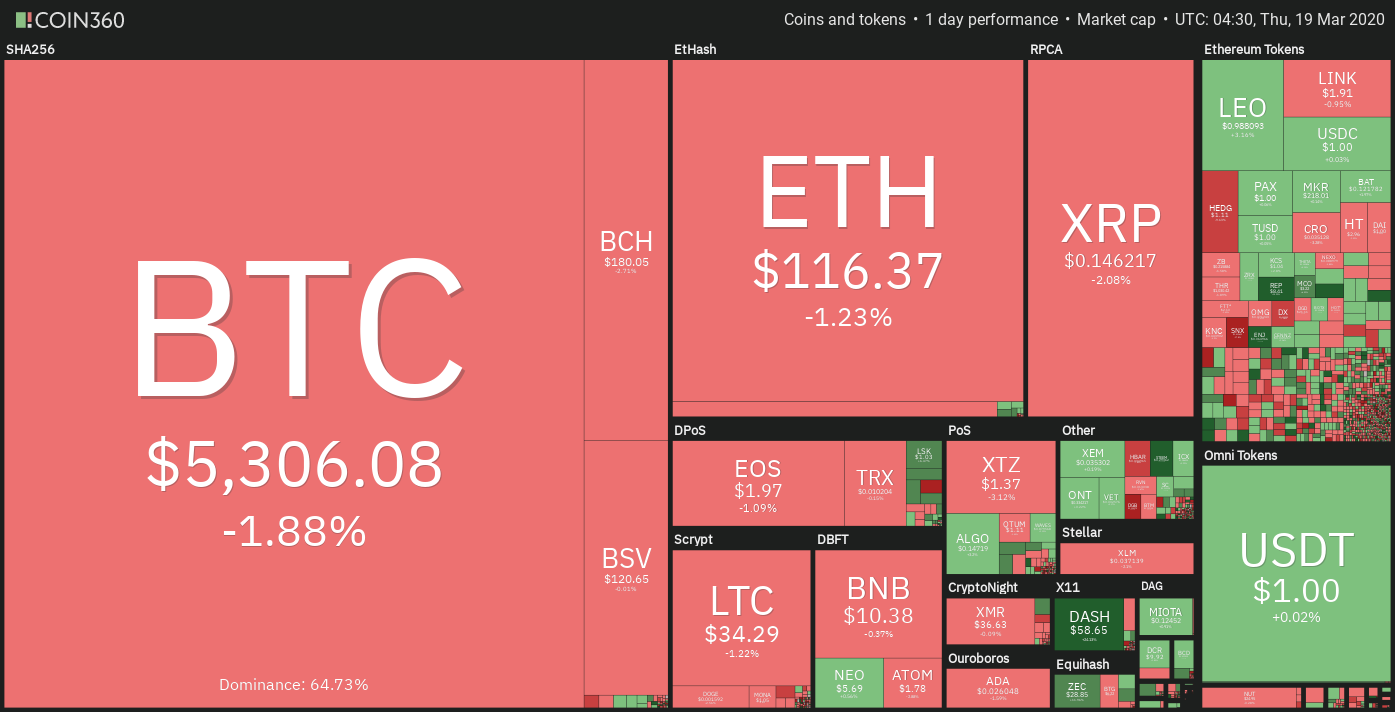 After falling 50.8% last week, Bitcoin (BTC) price appears to have found solid ground and the cryptocurrency has held the $5k mark quite well this week. This is a rather interesting turn of events considering that last week analysts were lamenting how the digital asset fell in tandem with markets, a complete inversion of the argument that Bitcoin is inversely correlated to major markets. 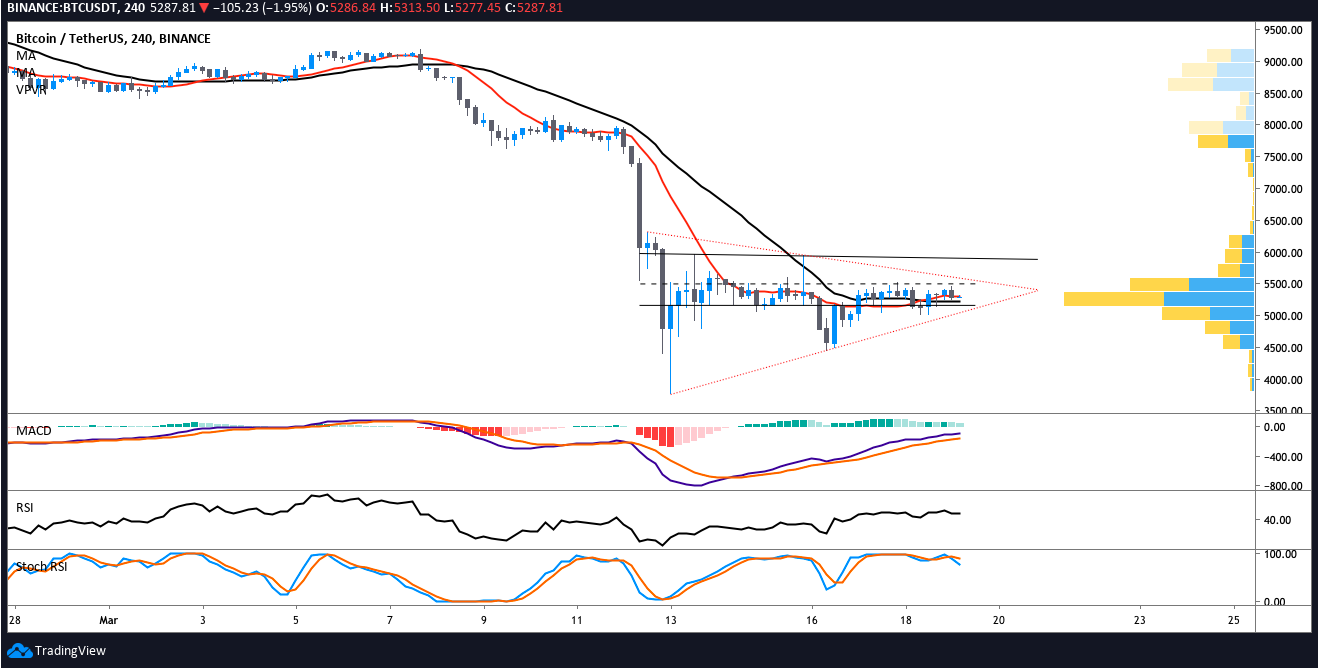 Earlier in the day the 12-period moving average also crossed above the 26-MA but at the time of writing the 12 is curving back down toward the 26-MA as the MACD histogram shows a slowdown in momentum and the RSI is pulling back to 46. 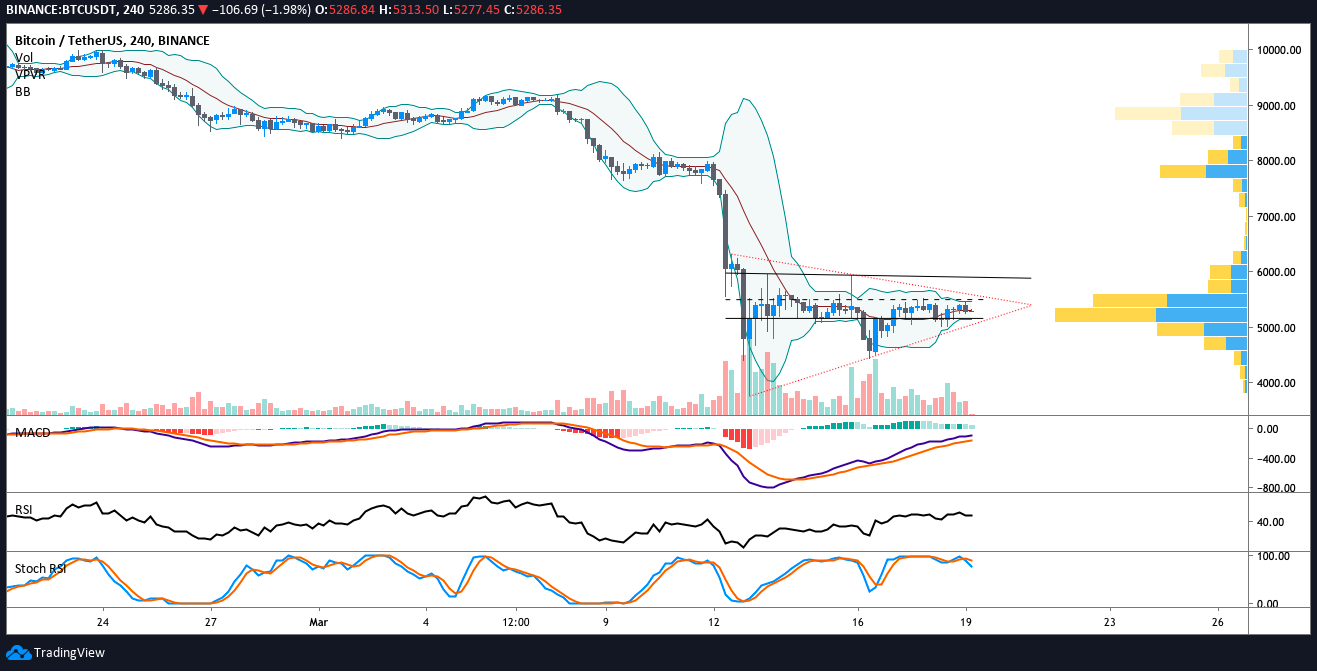 Currently the price is supported at $5,158 which lines up with the lower Bollinger Band arm and a high volume node on the volume profile visible range. Below this level $4,800 and $4,400 are each support.

All of the factors mentioned above suggest Bitcoin is preparing a larger move and despite holding a pattern of higher lows, the price remains capped at $5,415 and $5,500.

A bullish outcome would involve Bitcoin price pushing above the $5,500 resistance at the overhead trendline of the pennant to flip the level from resistance to support then seeking a daily higher high above $5,900.

As mentioned in previous analysis, $6,300 is expected to present resistance but above this point there is a gap on the VPVR which traders could push to the mid $7,000s on a high volume breakout.

A price rejection in the $6,300 to $6,400 region is also an acceptable scenario as Bitcoin would at least have made a leg up and can consolidate in this higher range.

A bearish scenario would see the price drop below the $5,158 support and possible below the pennant to the previously mentioned supports at $4,800 and $4,400. Traders issuing calls for the price to drop below $3,000 have likely drawn together a thesis which begins with measuring the entry to the bearish pennant from $6,300 to $3,775 then adding the length of this pullback to the the vertex of the pennant, bringing the post-breakdown price to $2,678.

Of course, this could happen, especially considering the recent strong correlation of Bitcoin to equities price action, but it's good to remember that Bitcoin remains oversold on the higher timeframes.

During last week’s calamity the price bounced right at a VPVR demand area at $3,775.This area also functioned as a long-term support zone from late December 2018 to late March 2019 when Bitocin finally reached a bottom and then rallied in April 2019.