With Bitcoin price trading flat under $10K, the launch of the highly-anticipated Bakkt platform for institutional investors is now just three weeks away.

Bakkt has been approved, and starting Sept. 6, clients will be able to deposit their funds into the Bakkt Warehouse, in anticipation of trading beginning on Sept. 23.

Is this time different or will the market reaction to this latest institutional product launch echo that of the CBOE futures launch in December 2017 — which resulted in Bitcoin (BTC) price dropping 85% over the following twelve months.

A key difference between the CBOE and CME future products and Bakkt’s, is that the futures contract through Bakkt is settled in Bitcoin, not cash. This will be significant, as it means that clients who trade that product will receive actual Bitcoin in their accounts upon settlement, instead of dollars.

The continued development of institutional grade products for both trading and custodianship should be perceived as bullish for the asset class, as it allows for greater access to these markets for investors, as well as increasing general liquidity. 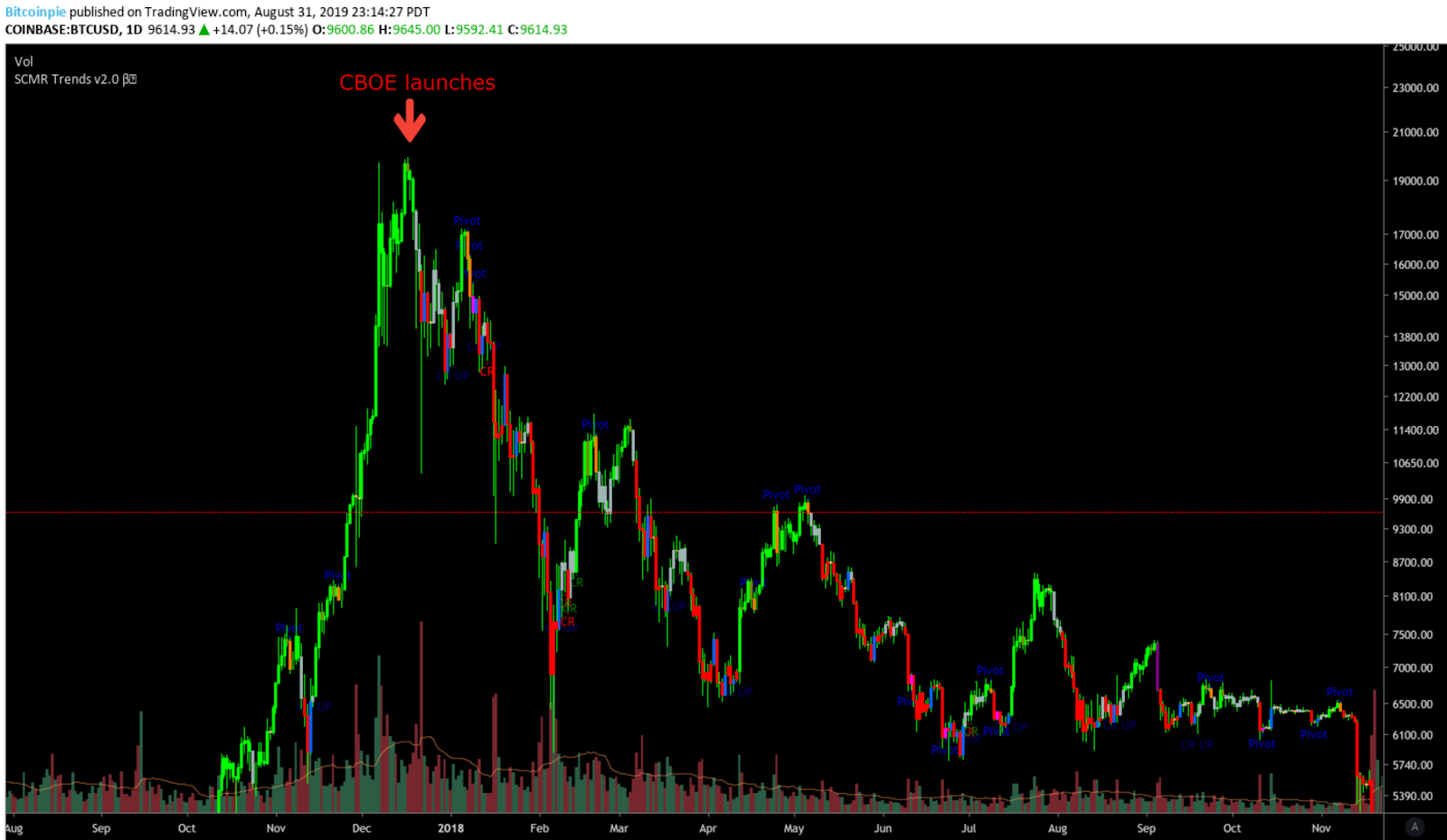 Let’s take a look at several key indicators to see how Bitcoin price is currently behaving in the run up to the Bakkt launch date.

While the Bitcoin market has been dropping in volatility quite substantially over the past month, this had lead to a very clear consolidation pattern to form with the $9,000 marker serving as immediate support, and a downwards sloping resistance, which is currently sitting at $11,000.

Typically, when volatility drops off to this degree, it is an indicator that the next move will be a large and explosive one. 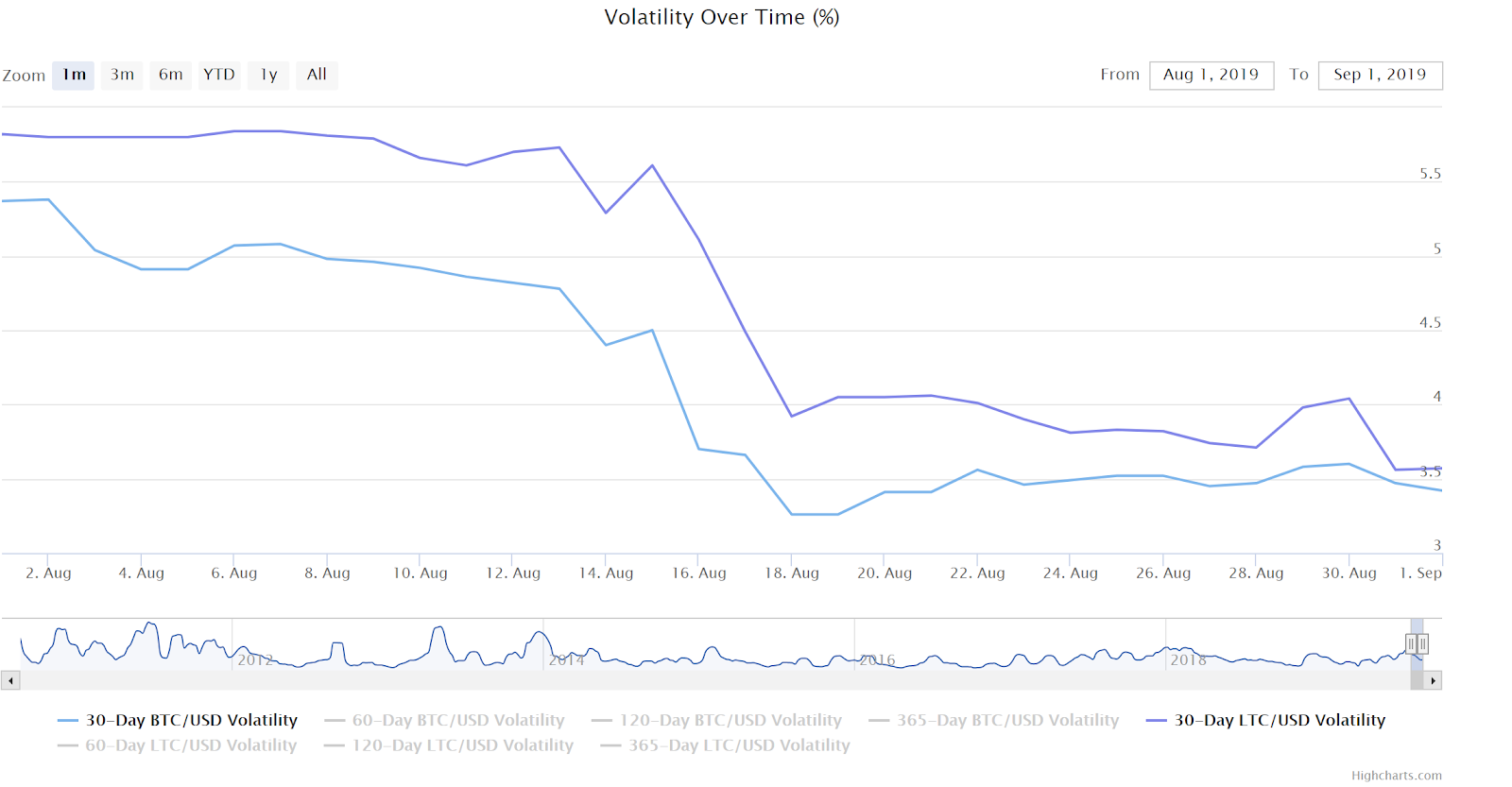 If an increasing hash rate is a sign of confidence in the network, as well as an indicator of the underlying health and interest in that network, then the Bitcoin network is the strongest.

The Bitcoin hash rate has been steadily rising this year as new batches of miners and mining operations come online at a quickening pace, ahead of the block reward halving next May.

Keeping a close eye on the volatility index, as well as the hash rate can be used as leading indicators to determine when a large move is likely to occur, as well as giving insight into the health and interest from investors at a network level. 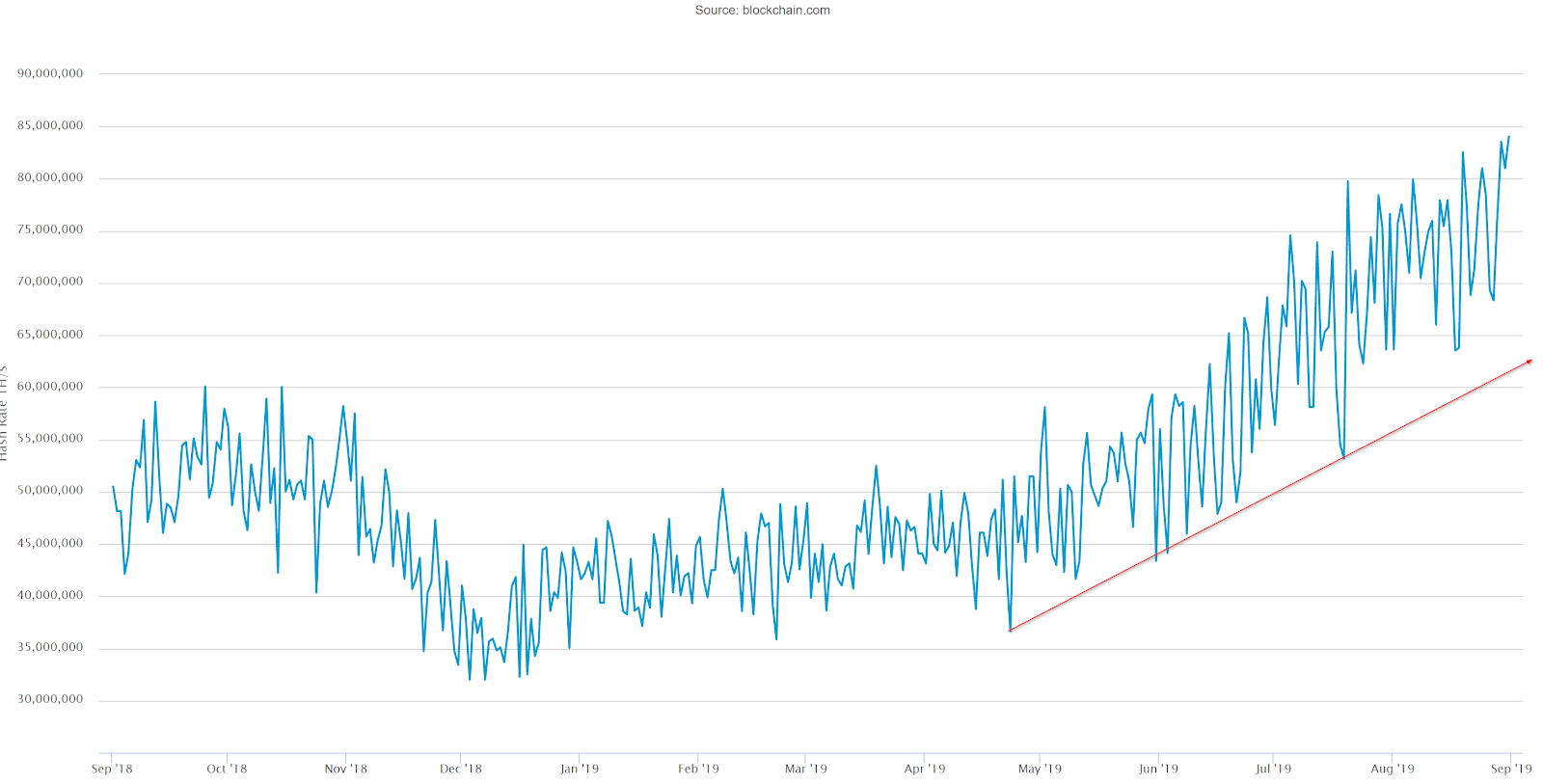 Consolidation continues, but a large move is on the horizon

The market conditions over the past week have been low volume and choppy, and not advisable to trade in. Given all the factors listed above, a high value trading opportunity is rapidly approaching, with resolution to likely take place in late September or early October.

As price hovers above the major support at $9,100, the key level to watch for an early signal of a trend reversal for the bulls will be a breach and close above $9,900, which is currently the level of the bearish throwback. (If you’re not familiar with that term, I invite you to check out the material on Wyckoff theory.) 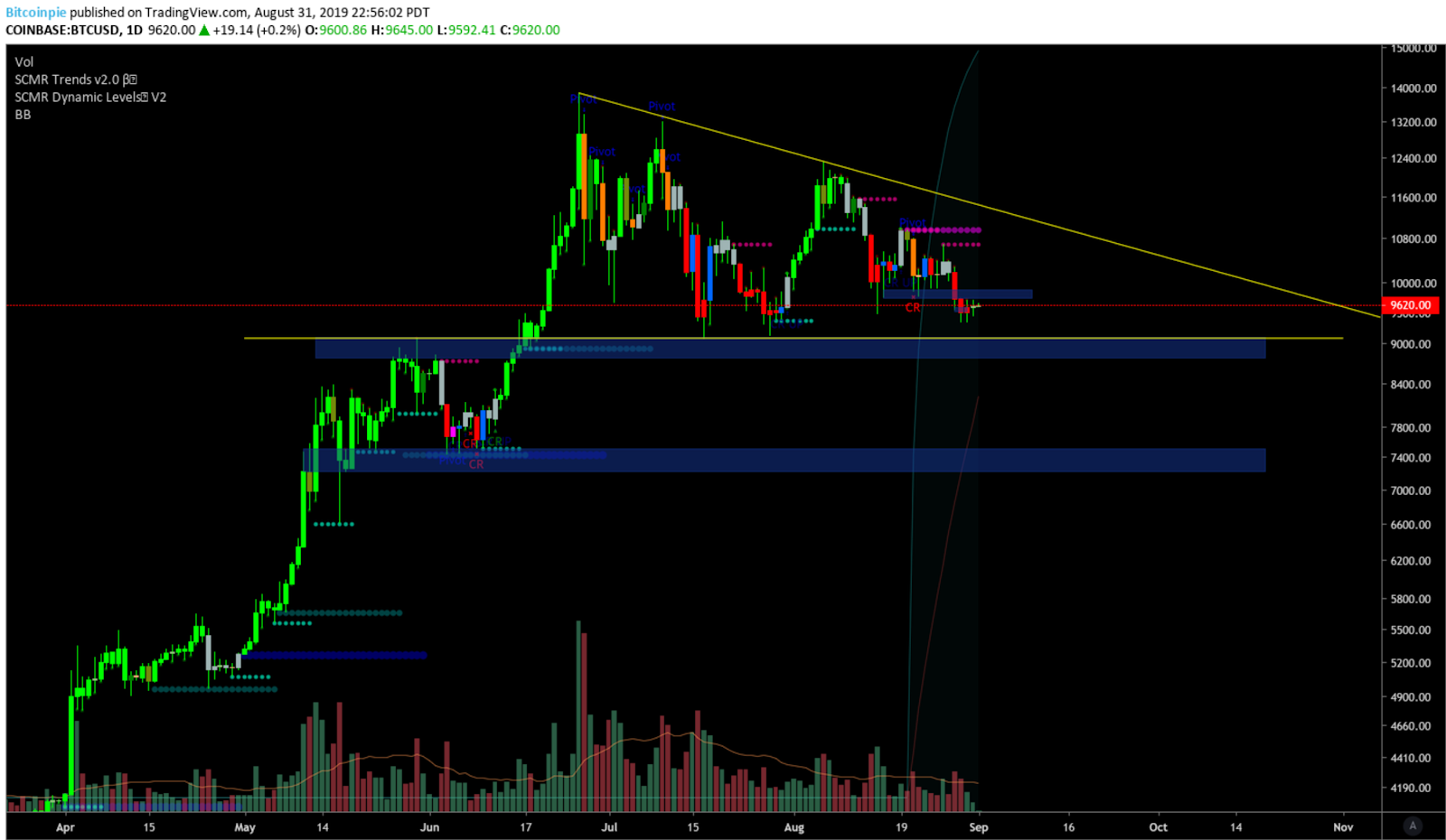 The macro case for Bitcoin as well as network fundamentals make a strong case for continued strength for the asset class.

But let’s zoom in our perspective and lower our time frames to the near term to map out where price could be headed in a bullish scenario.

As previously stated, price needs to breach the bearish throwback level at $9,900 to confirm a trend reversal for the bulls, which would paint an immediate target at $10,200, and $11,000.

Both targets serve as strong order blocks. These previously acted as pivot points in price action. Price often targets these order blocks as that is where resting liquidity is, and they usually act as stopping points. 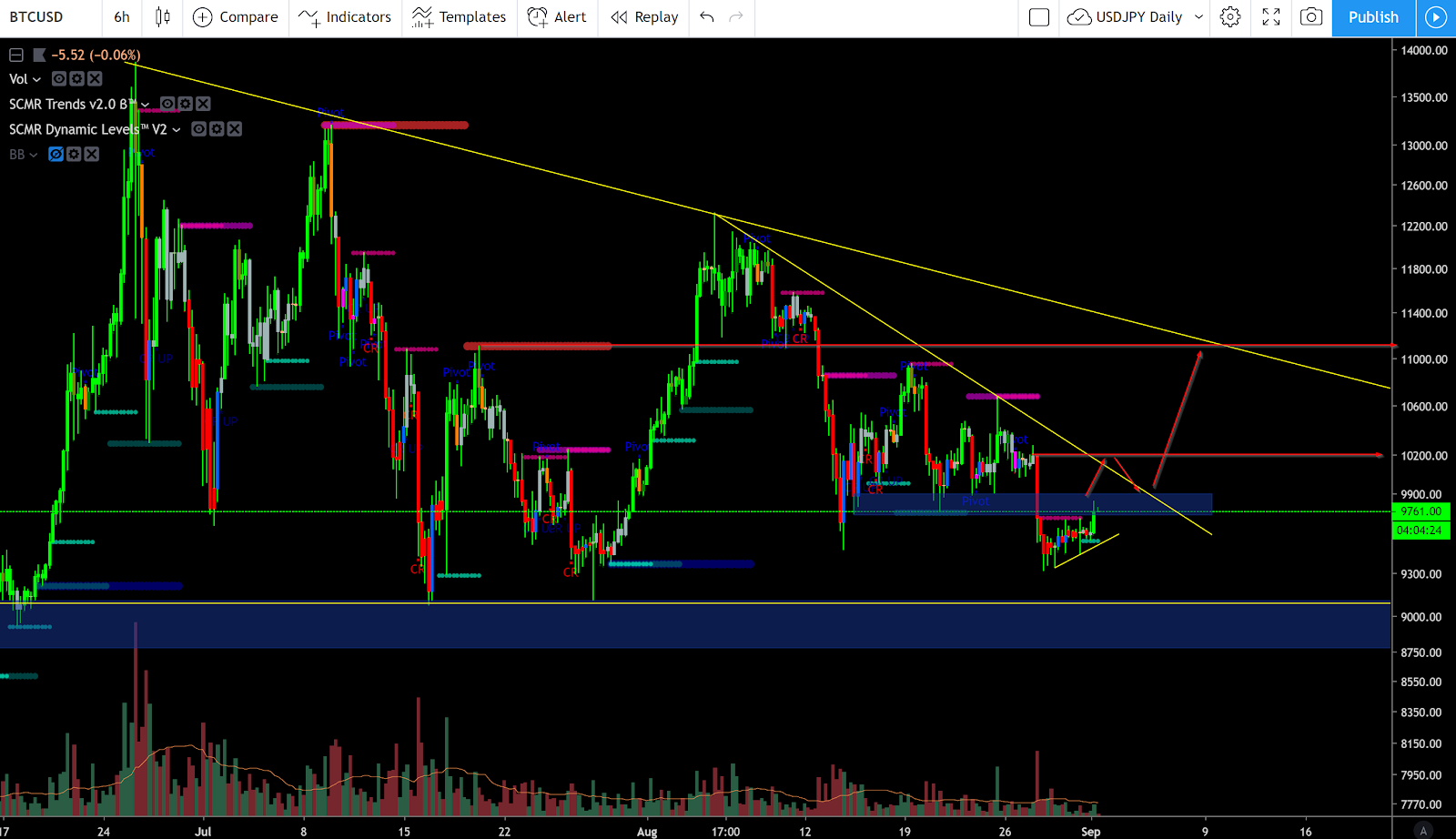 The bearish case is a simple one: a descending triangle and a trend continuation from what we have seen this month. The price has seen a 350% rise this year without any major correction since carving out high time frame support at $9,000. So failure to break this critical throwback level at $9,900 would spell disaster for the bulls, and likely see price fall back to test the $9,000 level.

If that is broken, BTC/USD could see a price pull back to the previous large daily and weekly levels at $8,300 and in a deep sell-off, back to the $7,500 level. 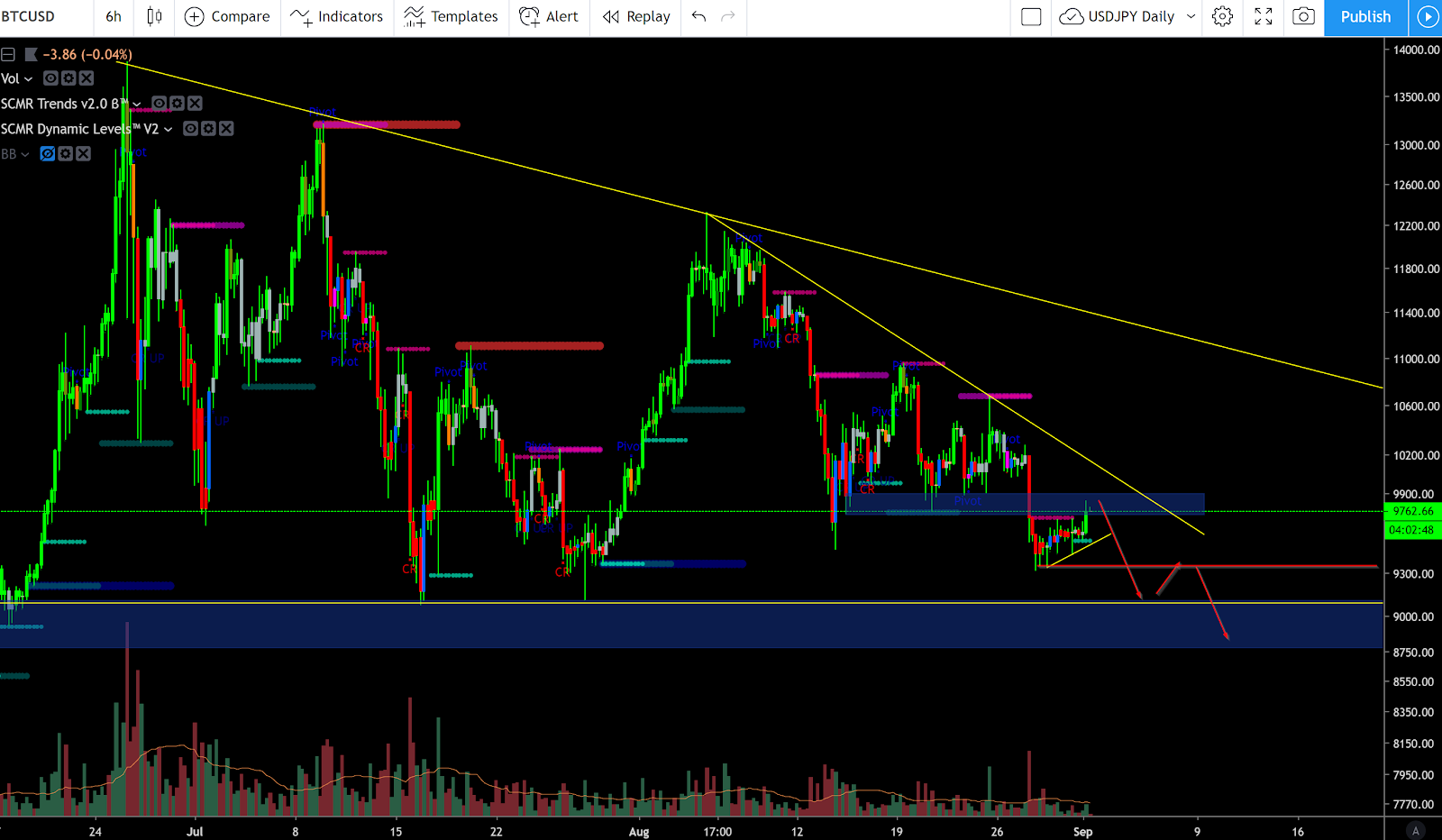 Short-term traders should be cautious

Given the strong network health and growth of the Bitcoin network, as well as increased interest and accessibility for institutional involvement, whether it be through Bakkt, the CME or activity in the OTC markets, all things point to continued upside performance for Bitcoin in the long run.

That’s not to say Bitcoin doesn't have its challenges to overcome, which include scaling and addressing privacy concerns. But history has shown that as problems present themselves, the rapidly growing community of developers have consistently risen to these challenges and put forward viable solutions.

The short term traders should always keep aware of the macro factors, as you don’t want to be fighting the prevailing trend for long, or you risk blowing out your trading account.

Setting alarms, reducing the frequency of trading, and only taking the high risk/reward trades at the order blocks will yield the best results and reduce your risk substantially.

A good rule to live by is that capital preservation is just as productive as growth when you aren’t sure of the direction or have an edge in your trading. Given the macro trend, strong fundamentals, and keeping the 2020 having in mind, pull backs should be seen as a dip buying opportunity with at least a one year outlook.