Blizzard’s ban of Bitzchung for expressing his political views triggers community outrage. Is the blockchain coming to the rescue?

The gaming world burst into an outrage as a result of Blizzard's move to expel a leading professional gamer from Hong Kong, Chung Ng Wai (aka Blitzchung), from its international Hearthstone esports tournament. Hearthstone is an online game featuring collectible cards that give players certain characters and abilities for an edge against their opponents.

It was not long until Gods Unchained, a rival blockchain-based game, claimed it will give back Blitzchung all his rescinded winnings and welcome him into their tournaments.

Blitzchung was removed from the Hearthstone Grandmaster tournament he had just won as soon as he said: "Liberate Honk Kong, the revolution of our time” in an interview. In a display of solidarity with the Hong Kong protestors, the 21-year-old gamer wore a gas mask (frequently donned by the protestors) right before he pulled it down to broadcast his message. 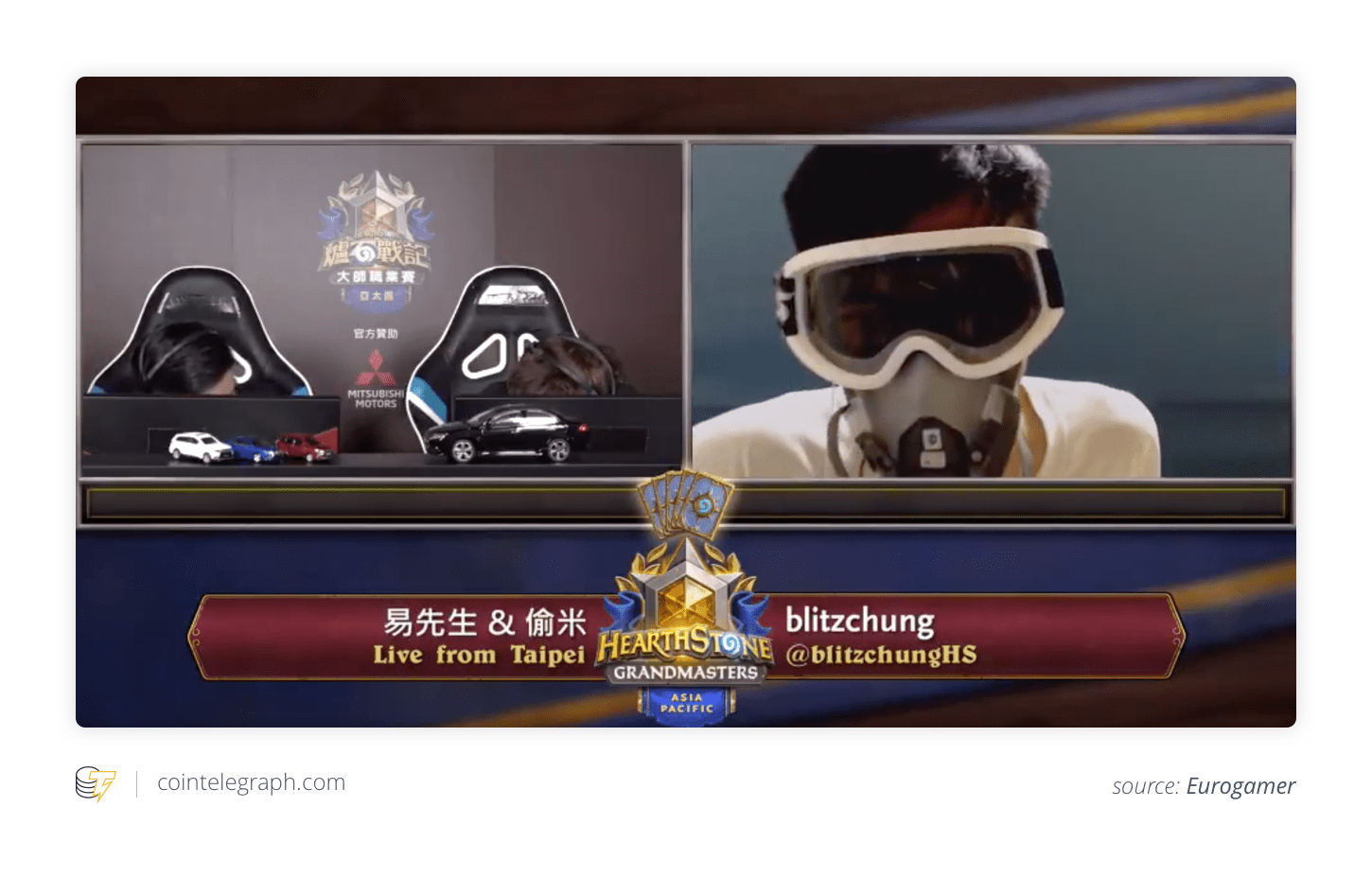 Gods Unchained to the rescue

The Gods Unchained Twitter account was among the first to react to the story as it developed. The blockchain-based game posted it would pay all of Blitzchung’s lost winnings and give him a free ticket to a Gods Unchained tournament, which has a $500,000 prize fund.

Similar to Hearthstone, Gods Unchained is a competitive card game where players collect cards to accumulate abilities that can be used to fight opponents. The difference between Hearthstone and Gods Unchained is that the latter comes with playable cards with unique identifications built into Ethereum’s public blockchain.

This means that card ownership is in the hands of the players. With a blockchain gaming platform such as Gods Unchained, the platform’s owners cannot easily ban a player nor can they withhold winnings.

According to a number of Blizzard’s critics on Reddit, even though the move by Gods Unchained is a marketing strategy, they largely believe it is acceptable, given that they consider Blizzard's stance toward Blitzchung to be overly harsh. To explain its ruling on Blitschung’s case, Blizzard (the company that owns Hearthstone) issued the following statement:

"Upon further review, we have found the action has violated the 2019 Hearthstone Grandmaster official Competition Rules section 6.1 (o) and is individual behavior which does not represent Blizzard or Hearthstone  Esports”

The company also quoted a statement from its competition rules that indicates any act that is, in Blizzard’s sole discretion, offensive to a portion of the public will result in participants being removed from the tournament and their winnings reduced to zero.

Gods Unchained’s prompt reply generated a lot of interest in its platforms from the gaming world. The rival gaming platform has received over 26,000 upvotes to its Reddit post and even more traffic to its platform — so much so that the owners claimed their servers were “hugged to death.”

Recent data from Google Trends also show that searches for the keyword “Gods Unchained” have increased over the same period. 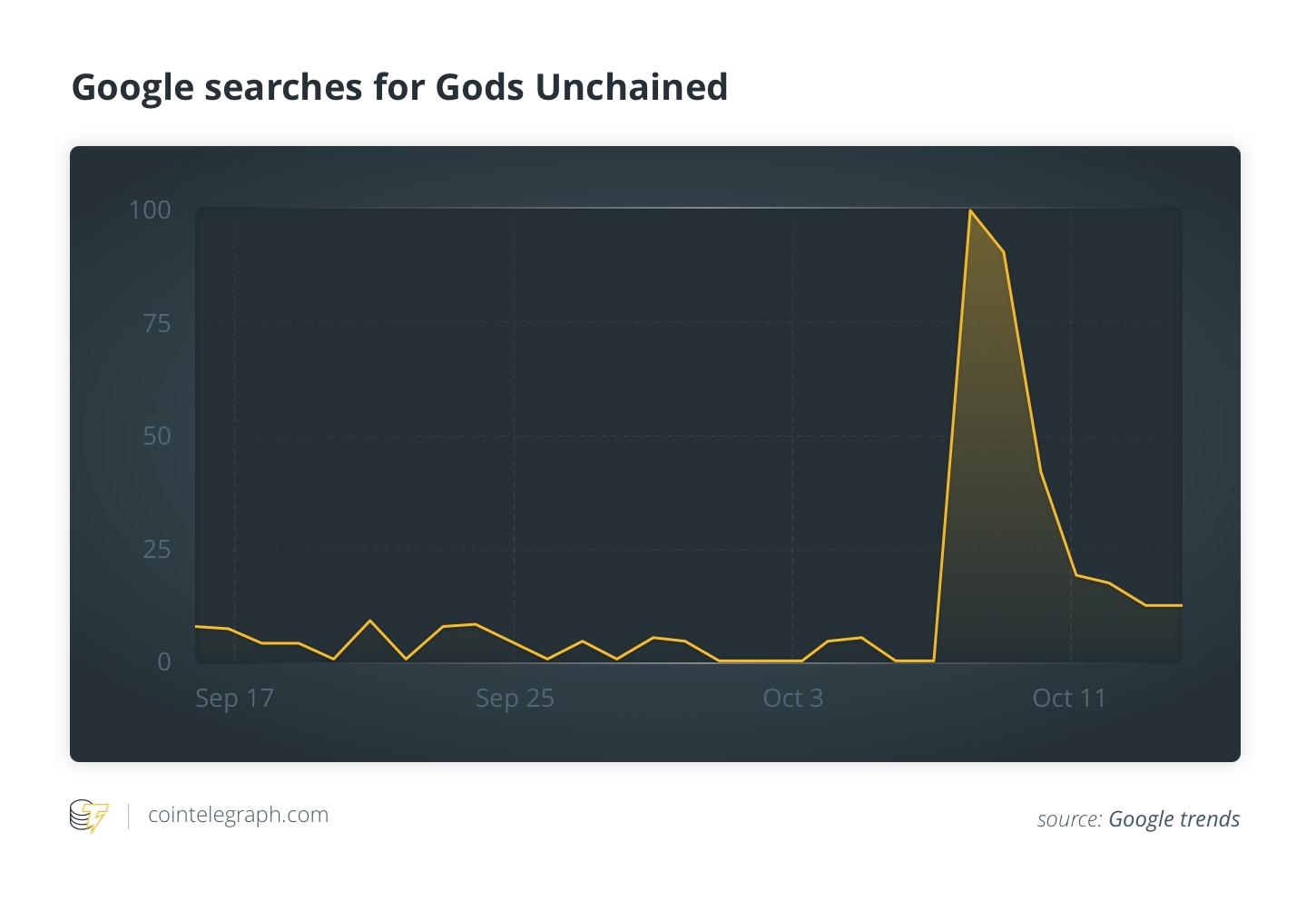 James Ferguson, the CEO of Immutable, the parent company of Gods Unchained, said that the response to the move has so far has been overwhelming: “Our player base is rapidly growing with nearly 20,000 signups last week, most of whom are interacting with crypto for the first time.” When asked whether there has been any response from Blitzchung about the offer of paying him back his lost winnings, Perkins replied:

“We’ve been chatting since the announcement. He hasn’t confirmed or denied if he will take us up on the offer, but whatever he does next we wish him the best.”

Blizzard users also responded with a Reddit page of posts from players saying they will deactivate their accounts out of protest. Furthermore, the story has gained enough traction on mainstream media to attract the attention of two U.S. senators, Ron Wyden and Marco Rubio, who have commented on the issue.

U.S. Sen. Ron Wyden from Oregon said in a tweet that “Blizzard shows it is willing to humiliate itself to please the Chinese Communist party.” He added:

“No American company should censor calls for freedom to make a quick buck.”

Marco Rubio, a U.S. senator for Florida, also commented, saying, “China is using its access to the market as leverage to crush free speech globally.” He also mentioned that the implications of censorship “will be felt long after everyone in the U.S politics today is gone.”

Although Blizzard had previously maintained its silence on the matter, a statement released by the company on Oct. 11 showed that a reduced punishment will be handed out to the player. Blizzard’s president, J. Allen Brack, has revealed in an open letter that instead of rescinding all of Blitzchung’s winning, the player will keep his winnings and that the suspension from the platform will last only six months instead of 12.

Brack, however, made it clear that the statement was not an apology and that Blitzchung did violate platform rules. Brack also disputed claims of influence from the Chinese government concerning the company’s decision about the issue. He wrote in the open letter:

“Over the past few days, many players, casters, esports fans, and employees have expressed concerns about how we determined the penalties. We’ve had a chance to pause, to listen to our community, and to reflect on what we could have done better. In hindsight, our process wasn’t adequate, and we reacted too quickly.”

The letter also said that in the future tournament rules will continue to be enforced in order to keep the platform away from politics.

Blockchain as a solution to censorship?

As the Chinese government continues to undertake what some regard as controversial moves aimed at solidifying political loyalty, companies are increasingly being forced to pick a side. Just recently, the American public was outraged when Beijing moved against the NBA for a pro-Hong Kong tweet posted by the general manager of the Houston Rockets.

Given that centralized online censorship is on the rise, can blockchain companies like Gods Unchained provide a much-needed reprieve? According to Fazri Zubair, chief technology officer of game development company Lucid Sight, blockchain’s peer-to-peer nature makes it censorship-resistant and therefore a useful tool for achieving freedom of speech in the online gaming industry. He pointed out an example where people “are free to trade cards between each other just like traditional baseball cards and memorabilia.” He added:

“Blockchain’s biggest strength against corrupt authorities is that it enables peer to peer trading of digital items.”

In the gaming world, this would give users more control of their winnings, as the platform owners cannot stop someone from accessing their collectibles. He further mentioned:

“If a government decides to make peer to peer trading illegal, they have to answer some tough questions about why this is different from thousands of years of humans using barter and physical money.”

Ferguson is also optimistic about what blockchain can do for the industry. In his opinion, "The technology allows uncensorable free-market economies to exist, so you’ll start to see gaming economies closely mirror and interact with those of the real world."

Even though the internet has somewhat delivered on the promise of decentralized distribution of information, the nature of how web traffic works leaves the entire system vulnerable to various bottlenecks. There are already studies that have exposed these vulnerabilities, especially among major search engines that tend to operate as de facto points of centralization.

In the gaming world, mega platforms such as Hearthstone control a significant portion of traffic and therefore can apply pressure points that can change the entire view of the industry. When asked about his suggestions of more decentralization on gaming and other online platforms, Zubair pointed out that embracing "centralized gameplay and decentralized optional asset ownership" can achieve a balance.