Will the Price be Right for Salvaging the Isle of Man?

Capital Treasury Services, part of the Capital International Group’s financial empire, announced that as of next month they would no longer be doing business with digital currency businesses. 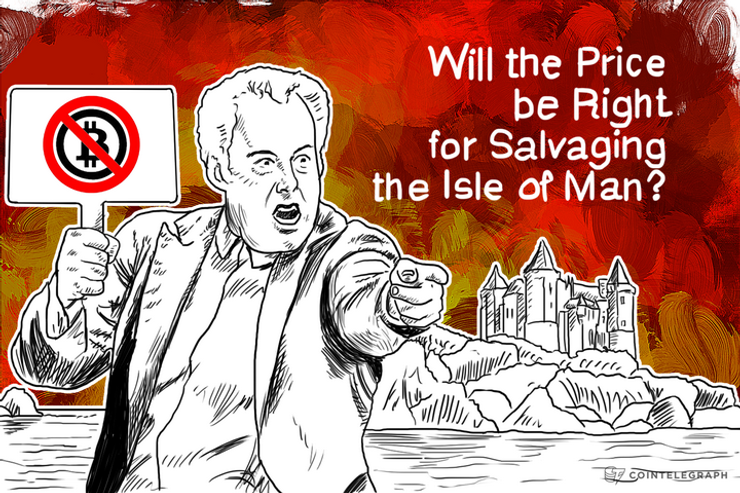 Meanwhile, two providers have stepped into the picture announcing a solution to the CTS bailout. At the Crypto Valley Summit, a hosted on the isle and arranged prior to the news, payment processing merchant Counting House stated its ability to offer banking services to its cryptocurrency firms.

“The great news is we have a new banking solution lined up for the island’s businesses, and they should be able to continue their endeavors unabated,” CEO Paul Davis told local radio station Energy FM.

Davis did not go into further detail on the proposal, but Counting House’s experience in providing payment solutions for the international egaming community suggests foreign partners are involved.

Similarly looking for external support to deliver its solution is Instabill, whose founder Jason Field, also currently attending Crypto Valley, told CoinDesk that the key is “working with banks in various jurisdictions”.

“We have had multiple discussions with our acquiring banks, they understand the business and they are interested in entering and facilitating processing solutions,” he added.

However, Instabill’s service terms may come as an unwelcome surprise to businesses, with figures including a US$499 sign-up fee. “To accept payments, digital currency merchants would need to pay a 6% discount rate, plus 50 cents per transaction,” CoinDesk states.

The true watershed moment for the Isle of Man’s Bitcoin community could thus well come when CEOs sit at the drawing board, should the financial cost of a workaround ultimately prove unworkable.

It was just a few months ago that the Isle of Man announced their plans to become a haven for Bitcoin and other cryptocurrencies. There is little doubt that the Island’s government hoped to establish them in the cryptocurrency sector in much the same way as countries with lax banking laws in the Caribbean had captured so much of the financial sector. This plan seems to have hit a major roadblock however after Capital Treasury Services, part of the Capital International Group’s financial empire, announced that as of next month they would no longer be doing business with digital currency businesses.

This is an especially interesting development considering that the government has been vocal about their support for digital currencies. The Isle of Man is a self-governing British dependency and in March of 2014 its Financial Supervision Commission (FSC) ruled the many of the island’s licensing laws did not apply to Bitcoin, which of course opened up a flood of interest from the Bitcoin community and speculation about new investment opportunities.

The Capital Treasury Group acts as money manager for several governments. CTS has been offering banking for the Isle of Man digital currency organizations for some time now and also held funds for clients who were involved with Bitcoin. But now CTS is claiming that it experienced negative influence from its banking partners with regard to Bitcoin. Such pressure from institutions forced CTS to ban services for all companies involved with digital currencies.

The statement released by CTS instructs account holders that their accounts will be closed no later than October 15, 2014. A company spokesman said:

“Although support from government is very strong, and we have been keen to get behind the government’s initiative, we are only able to do so with the wider support of the financial sector, which has, unfortunately, now been withdrawn.”

The local Bitcoin community is anything but pleased, although surprisingly understanding. Netagio, the only British exchange that allows users to trade Bitcoin, gold or GBP has a big stake in the Isle of Man Bitcoin community and CEO Simon Hamblin stated:

“We entirely understand that the decision is outside the control of CTS because of their active engagement with the Department of Economic Development of the Isle of Man Government and the wider Crypto-Currency community both locally and internationally. They rely on the support of the wider financial services sector, and this support has sadly been withdrawn. Britain is making claims about its commitment to innovation, not least in the area of FinTech, and yet, regrettably, the banking industry does not seem to share this commitment.  The sad impact is that this view – which some might argue to be anti-competitive – ultimately will drive innovation, talent and future economic benefit to other jurisdictions.”

The general attitude seems to be one of disappointment but with a slight c’est la vie flavor and some are already looking for alternatives providers in other jurisdictions. This might be a much harder task than they anticipate if the big European banks are arrayed against them. The Isle of Man, once seen as a haven for Bitcoiners, might end up neighbors with Atlantis. There does seem to be a great deal of support for the island however. The UK Digital Currency Association said in a statement:

“No stone is being left unturned, and there is a great confidence that new banking solutions will be provided shortly,” said Eric Benz of the UK Digital Currency Association. He also stressed the fact that CTS still believes in digital currencies. CTS are just the victim of its banking partners, making it impossible to keep working the way they have been doing.”

This is the first time that a group of banks openly attacked Bitcoin but it is unlikely to be the last. There are a number of other locations where Bitcoin is being experimented with, such as Jersey Island, also a UK dependency, and Dominica in the Caribbean where an entire nation is being given free Bitcoin. We can only hope that these provide too big a challenge for the banks to overcome.

“Britain is making claims about its commitment to innovation, not least in the area of FinTech, and yet, regrettably, the banking industry does not seem to share this commitment.  The sad impact is that this view – which some might argue to be anti-competitive – ultimately will drive innovation, talent and future economic benefit to other jurisdictions.”