Tezos' price looks ripe to follow in Chainlink’s footsteps for a massive rally, and even new all-time highs given the correlation of these two cryptocurrencies.

Altcoins have been taking the spotlight as massive surges are seen across the board. Some have been making 1,000% moves or more such as Aave (LEND) and Zilliqa (ZIL), for example. Others are slowly waking up out of the ashes, and some are printing new all-time highs.

One of those recent all-time highs is Chainlink (LINK), as its price broke above $5 for the first time ever. Once Chainlink moves, Tezos (XTZ) follows. Will it be the same this time? 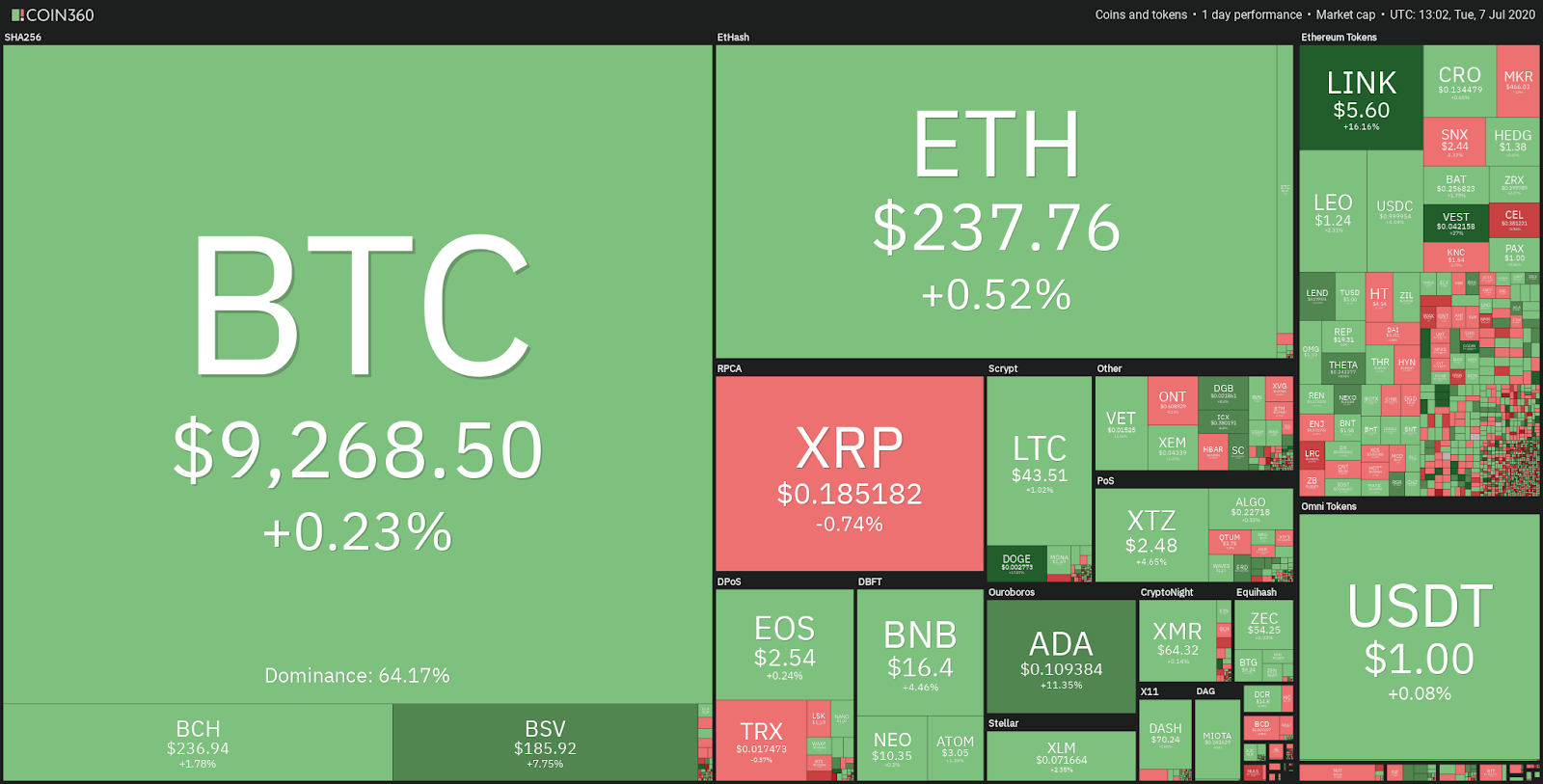 Chainlink breaks above resistance and prints a new all-time high 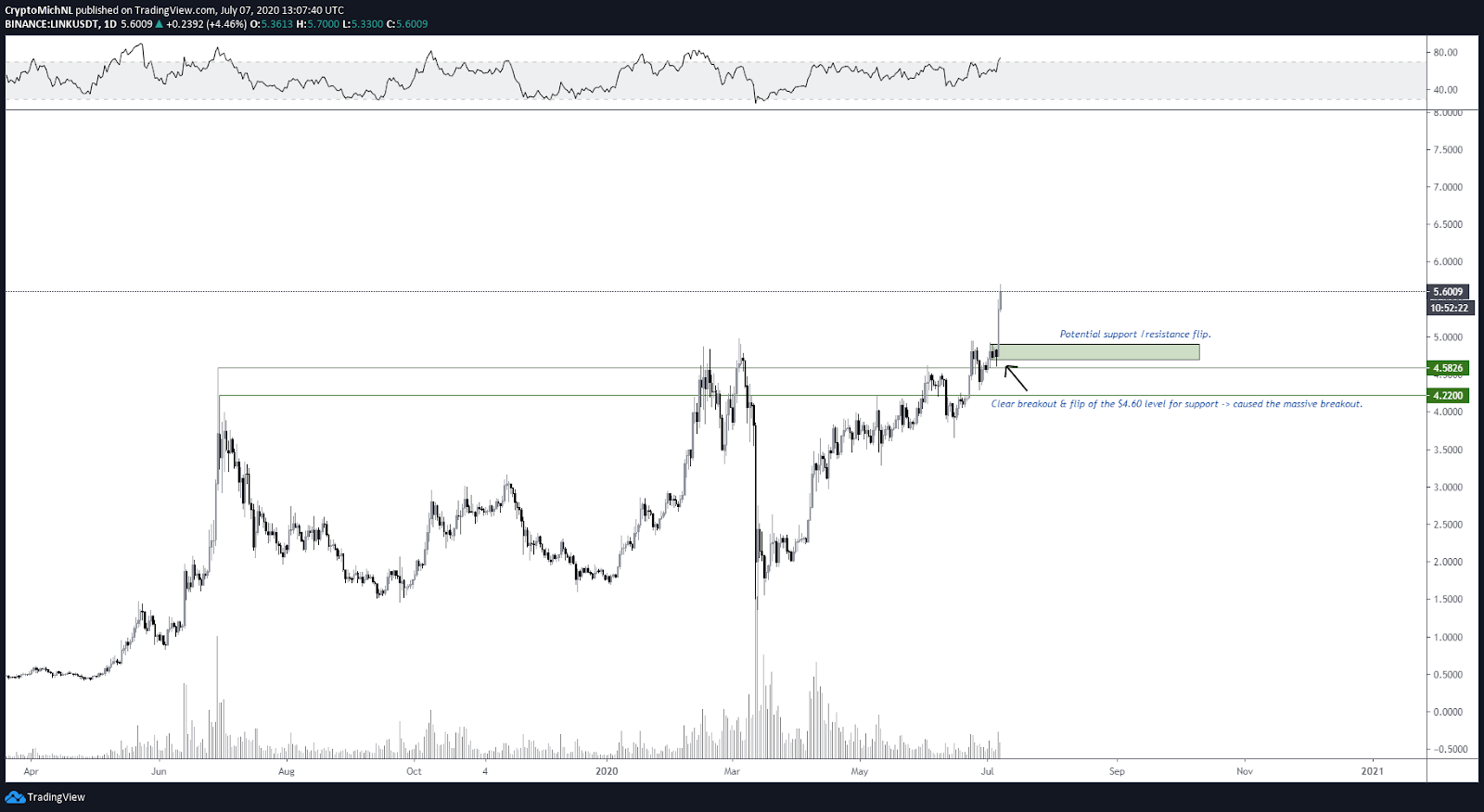 As the chart is showing, the price of Chainlink broke the previous all-time high and resistance level with a massive candle.

Before the breakout, a support/resistance flip of the $4.60 level occurred, through which confirmation of support was found. This flip caused continuation and an immediate surge of the price toward $5.70.

The price of Chainlink has been showing strength since the crash in March, as the price continuously made higher lows and higher highs. These movements mark a significant uptrend, which led to the recent price jump.

$5.70 is a new all-time high for Chainlink, which means that it is in a new price discovery phase and Fibonacci can be a useful tool for assets in price discovery.

The $7 level is a potential target for LINK 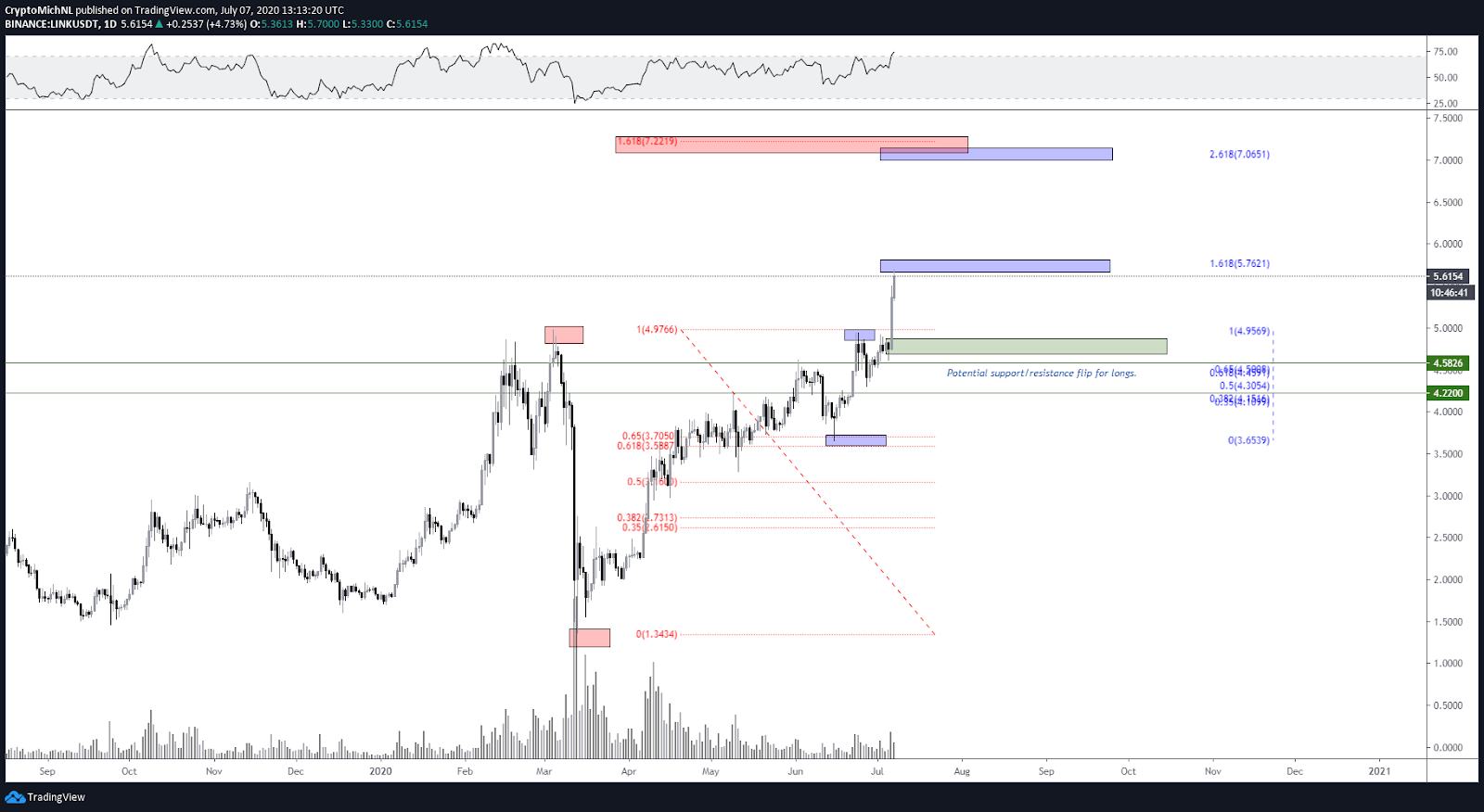 $7 is a possible target for the next rally of Chainlink. In this regard, two different Fibonacci extensions were used. The red one is between the previous high in February and the cycle low in March.

In that regard, the 1.618 Fibonacci level — the most important one — is showing a potential target at the $7.20 price level.

The first level has already been reached as a potential target, where consolidation is likely to occur. In other words, buy-the-dip opportunities are potentially at the previous high around $4.90.

If the rally continues, these two Fibonacci extensions suggest that a new target is somewhere between $7 and $7.25. 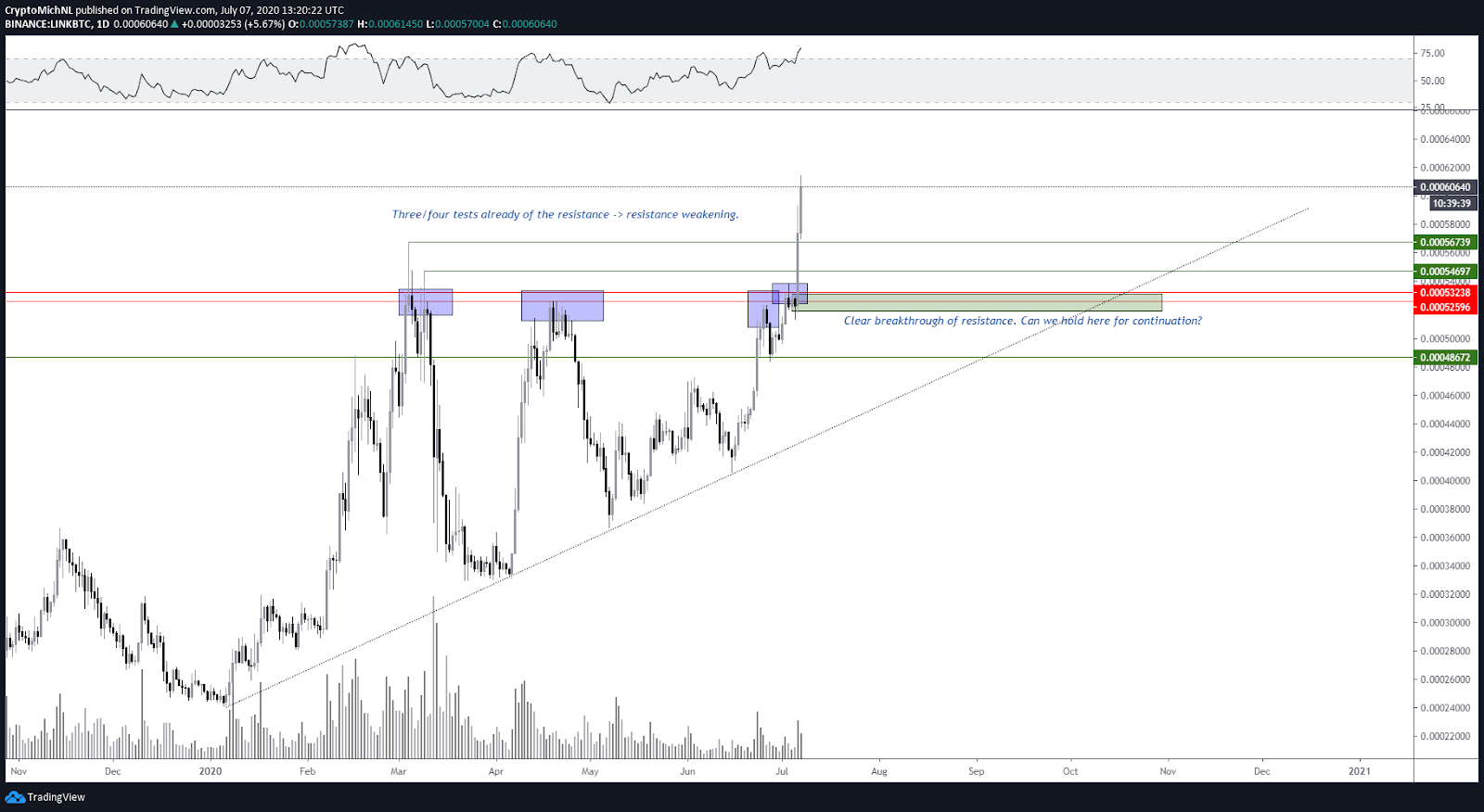 The BTC pair of Chainlink is showing a strong uptrend, which previously bounced from the 0.000525–0.000535 resistance level. As we have said previously, the more often a level gets tested, the weaker it becomes. This weakness led to a massive breakout in the past days.

The USD chart is already showing potential targets for the LINK price rally to continue. As it’s in price discovery, the newer targets can even exceed expectations.

For the BTC pair, a potential retrace toward 0.000565 sats or 0.00545 sats is not unlikely. The best-case scenario for a possible dip opportunity is the previous high. However, given the strong momentum of LINK, it’s expected that this level gets front-run by investors. Therefore, keep an eye on the 0.000565 sats and 0.000545 sats levels.

Given the correlation between the two altcoins in the previous year, Tezos follows Chainlink and vice versa. Therefore, it’s a good idea to keep an eye on Tezos as this cryptocurrency is showing a completely different structure than Chainlink. 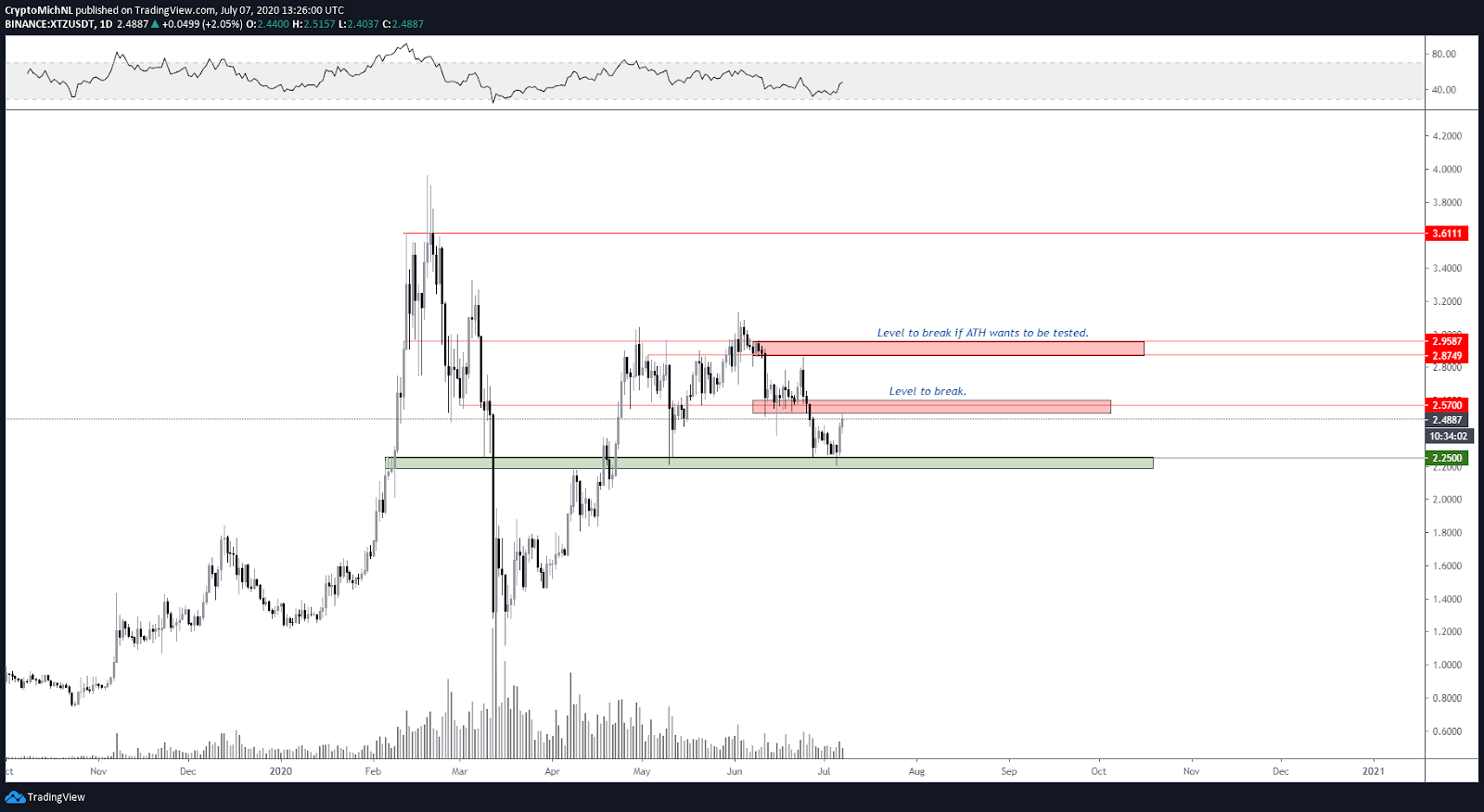 The Tezos chart is showing a bounce from support at $2.20. However, the chart is showing some significant hurdles. The first one is the resistance zone at $2.55–$2.60. That level needs to break to see a continuation of the rally.

If the price level of $2.55–$2.60 is broken, a continuation of $2.90–$3.00 is on the table. As the chart shows, this is the last significant resistance before the all-time high can be tested for XTZ/USD. The key support for the price of Tezos is $2.15–$2.25, which will likely see the rally continue if this level holds. 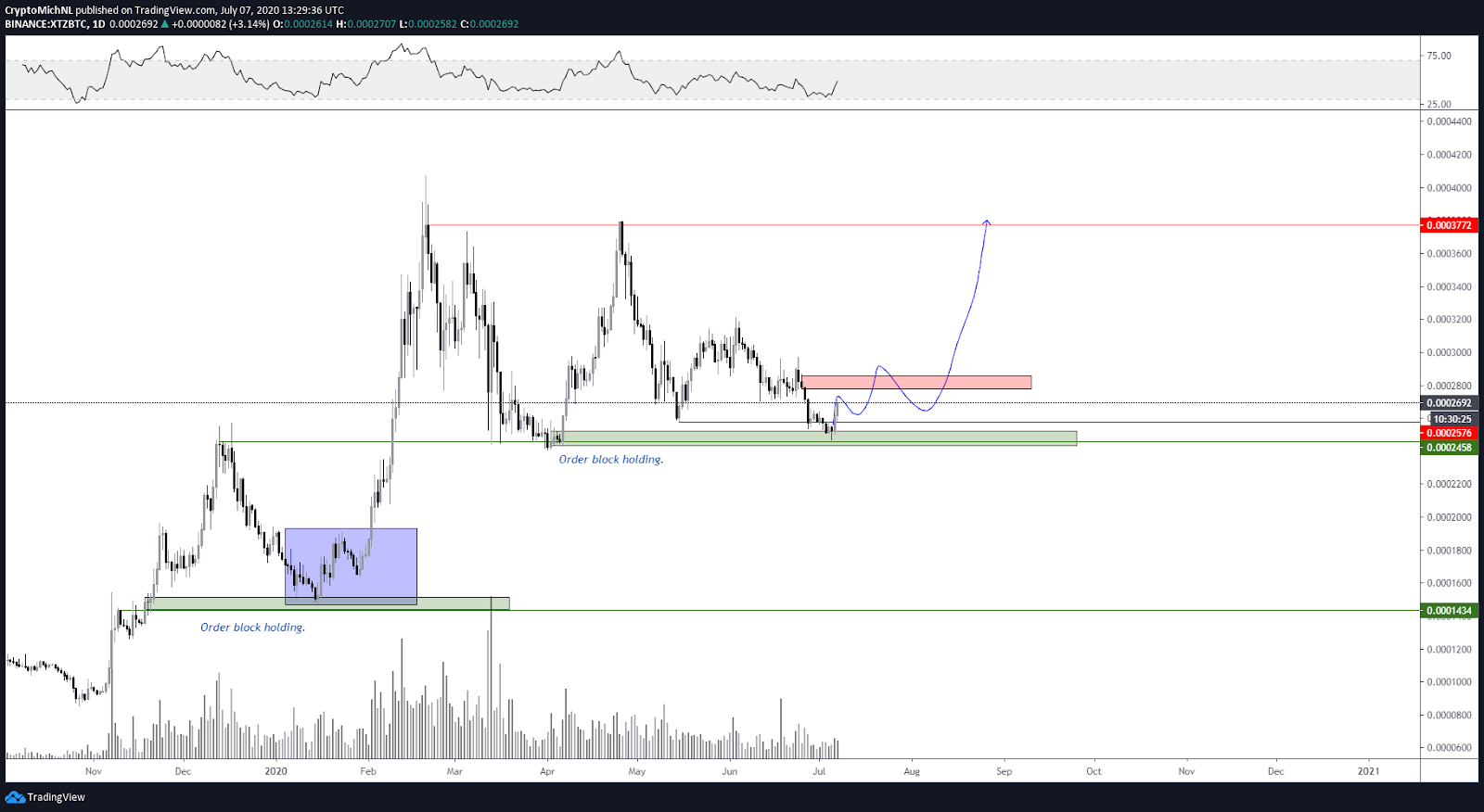 The BTC pair for Tezos is showing a bottoming structure as it attempts to flip the previous resistance into support. The blue rectangle is showing a structure that’s remarkably similar to its recent moves.

Overall, the sentiment and momentum of the cryptocurrency market have shifted recently, particularly for altcoins, which have been showing significant strength. Expectations for Chainlink and Tezos have been rising, especially in the last 12 months.

Tezos and Chainlink have been the best performers in 2019 while the majority of the market was still in a bear cycle. Therefore, it’s more than expected to see these two cryptos do well in the coming bull cycle.