Less than a month after Brian Armstrong declared Coinbase should “be laser focused on achieving its mission,” he seemingly violated his own policy by tweeting a political post riddled with falsehoods... during business hours.

In an Oct. 23 tweet from Armstrong’s personal account, the Coinbase CEO posted a link to a blog written by Rob Rhinehart on Kanye West’s presidential run with the tagline “epic post.” 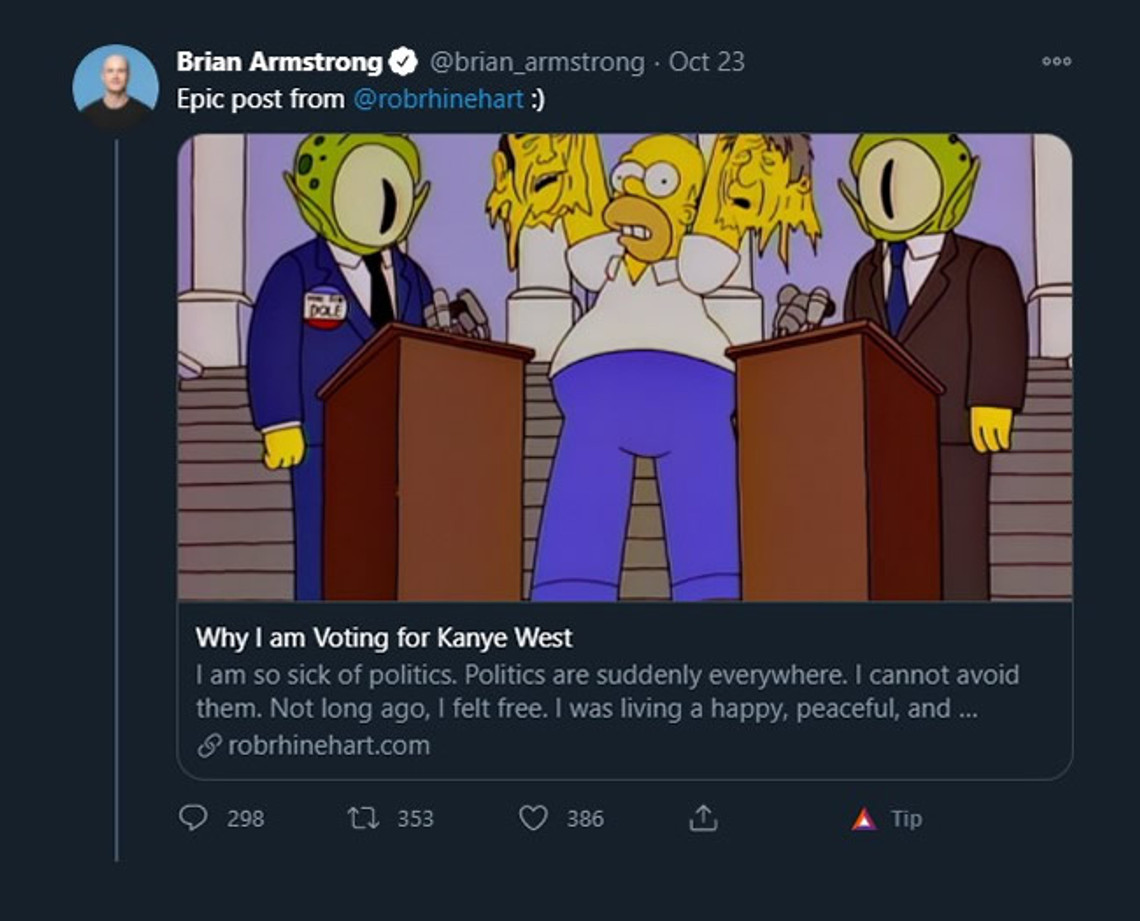 Rhinehart’s Twitter account is no longer available for unknown reasons, although its absence may be related to the inaccuracies and outright falsehoods contained in the post — even if it were written as satire, as some have speculated.

These lies include the claim that Democratic presidential candidate Joe Biden’s son “killed himself” — in fact Beau Biden died from brain cancer in 2015. Twitter previously locked the New York Post’s account for an article making unverified claims about Hunter Biden.

The blog post, entitled “Why I am Voting for Kanye West,” also seemingly goes against Armstrong’s stance on expressing political views at the crypto firm.

In September, Armstrong wrote a controversial blog post claiming Coinbase’s mission did not include advocating “for any particular causes or candidates internally that are unrelated to our mission because it is a distraction from our mission.”

“We won’t debate causes or political candidates internally that are unrelated to work,” stated Armstrong at the time. He added that Coinbase employees should not “expect the company to represent our personal beliefs externally.”

Some members of the crypto community accused the Coinbase CEO of outright hypocrisy for making a political statement — at 12:12 PM PST on a business day, assuming Armstrong works similar hours to those of his employees.

Having trust in the judgment of our leaders (even if we don’t agree with their decisions) is important in a CEO as well as president. This undermines trust in you.”

“That article has got to be satire, right? If not, it’s one of the most tone deaf, cruel, and grossly counterfactual load of tripe I’ve ever seen,” said Twitter user jray. “I’d honestly be quite embarrassed to work with/for someone who believed this.”

Ironically, the controversy surrounding Armstrong’s recent tweet is exactly what he said he hoped to avoid by making Coinbase an “apolitical culture.”

“There is a blurry line between moral statements and politics. We could use our work day debating what to do about various unrelated challenges in the world, but that would not be in service of the company or our own interests as employees and shareholders.”

Sixty Coinbase employees, or roughly 5% of its staff, reportedly left the crypto firm following the September announcement. Armstrong claimed in an Oct. 1 meeting that a "silent majority" of employees sided with him on keeping politics out of Coinbase. However, some who stayed have allegedly felt their freedom of speech has been stifled, with staff being required to erase certain politically themed correspondence posted internally on the Slack messaging platform. There is no constitutionally mandated right to free speech within private companies, however.

“If your original ‘no politics at work’ rule hasn’t driven out smart folks from your company, describing this rambling idiocy as ‘epic’ certainly will,” said Twitter user Gleb Bahmutov.

Update 8:48pm ET 10/25/20: The original tweet from Brian Armstrong has been deleted, and a screen capture has been added to this article.