Crypto Is Brewing in Colombia: Active Adoption That Will Wake You Up

Colombia is one of the key players in the crypto sphere by pace of adoption. What are the reasons behind such popularity?

The growing popularity of cryptocurrencies in Colombia has been widely discussed, as there is no unanimous consensus over the key reasons that are driving this momentum.

The fact is that there are several studies, such as the one carried out by Statista, that reflect a significant and relevant interest on the part of the Colombian user, highlighting it as the third country with the largest number of crypto users.

The stats speak for themselves

According to the Statista Global Consumer Survey published in 2019, in which an online poll was conducted among 1,000 people for each country studied, showed that Latin America is the region with the highest number of crypto users in the world.

Another survey conducted in 2019 by the peer-to-peer crypto exchange Paxful, in association with the consumer-insights firm Toluma Insights, claimed that Bitcoin (BTC) and Ethereum (ETH) adoption was in an uptrend within the Colombian population.

The report claims that 87% of respondents knew about the existence of cryptocurrencies, of which 80% showed willingness to invest in crypto. That is not surprising, considering that Paxful processed more than $1 million from Colombian users in 2019.

Furthermore, in 2018, Forbes published a list of the “Top 10 of Bitcoin Cities” in the world, placing Colombia’s capital city Bogotá in seventh place due to its 87 crypto-related businesses at the time. 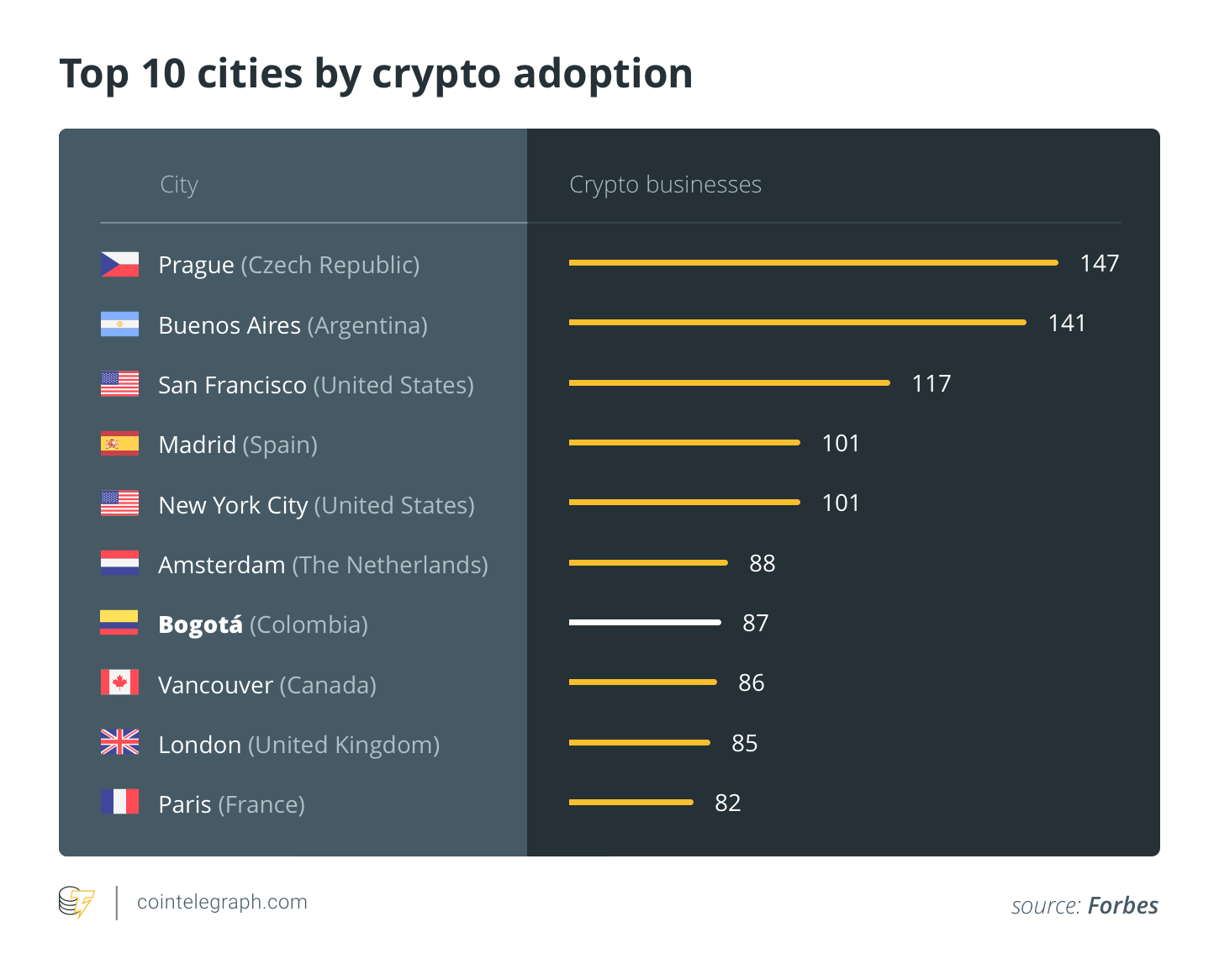 A response to inflation?

There are mixed opinions about what makes Colombia into one of the countries with the highest crypto adoption in the world.

In a dialogue with Cointelegraph, Jarek Duque, chief analyst for the Latin America region at UAE-based financial academy Tradepedia LLC, says that inflation cannot be one of the reasons for this crypto popularity boost, as the country has had one of the most stable inflation rates within the region, which currently stands at 3.72% annually.

That’s not the case for Argentina, claims Duque, which has unstable and higher inflation, and this explains why it’s the third country with the highest crypto adoption in the world, according to Statista.

To explain why there is a crypto boom in Colombia, Duque quotes a DEA report published in 2019 stating that cryptocurrencies are being used for money laundering by Mexican and Colombian cartels. Duque commented on the following regarding the investing culture toward cryptocurrencies in Colombia:

“Overall, financial education in our country is low, considering that in the United States around 70% of the adult population has some idea of the financial markets, while in Colombia only 1% have some knowledge about it. The latter would imply that Colombians in general don’t manage enough technical knowledge to understand an asset as complex as cryptocurrencies and reach the point of considering them as a safe haven.”

There were attempts to regulate the crypto environment in Colombia, although they were seemingly unsuccessful. For example, on April 4, 2019, a draft with the specifications to regulate the Crypto Exchange Platforms was published. The objective of this law was to define in general terms how companies offering crypto exchange services in Colombia should operate.

However, although there is no clear position from the Colombian financial watchdogs, Banco de la República — Columbia’s central bank of Colombia — published an article in 2018 that recognized the existence of crypto assets. The central bank weighed in on whether to consider cryptocurrencies as real money:

“Although these assets are presented with the capacity to fulfill functions of means of payment, deposit of value and unit of account, in practice, as stated by several publications of the Bank for International Settlements (BIS), they lack the attributes of the legal tender and are not likely to be considered as money.”

Alvaro Saavedra, a Colombia-based lawyer, believes that there are contradictions in how the national government views cryptocurrencies, which has made regulating such assets even more difficult. But Saavedra says there is a critical reason that explains the government's unwillingness to establish a regulatory framework, beyond a clear lack of knowledge about cryptocurrencies:

"Banco de la República's position towards cryptocurrencies is very valid because the way in which Colombian society is arranged implies material limits to give cryptocurrencies a certain validity from the legal point of view. For example, the existence of an armed conflict and a high number of drug trafficking groups implies that the State is afraid of regulating cryptocurrencies and if they do, they believe that the door would be left open for the creation of illegal economies and thus boosting money laundering."

Cointelegraph reached out to Banco de la República and Ministry of Information Technologies and Communications for further clarification, but has received no response as of press time.

Alejandro Beltrán, country manager of Buda — one of the largest cryptocurrency exchanges in Latin America — spoke with Cointelegraph about the regulatory legal framework in the country. In his opinion:

“It is highly restrictive and is doing huge damage to the Colombian people. First, the Financial Superintendence has virtually banned banks from offering services to cryptocurrency companies, which has eliminated many of the good actors who wanted to operate transparently. This has produced that most of the volume traded goes to the black market or more informal instances that often expose people with less experience.”

Beltrán also pointed out that the “rigidity” of regulatory issues in Colombia hasn’t been established, while a proper environment for the development of the industry in the country has. But this fact has not prevented crypto sphere companies from continuing to be interested in the Colombian market. Beltrán believes that Colombia is a favorable country for crypto business, adding:

“Colombia has three characteristics that convinced us that it was the best country where we should try to position ourselves. [...] Banking is relatively low and existing banking services are very primitive. For example, an interbank transfer between people takes an average of 48 hours to reach the destination account and costs about USD $2 per transfer, compared to Chile, which is free and instant.”

Buda’s Colombia country manager also believes that a high flow of Venezuelan immigrants in the country also helps to boost crypto transaction volumes in Colombia, translated into a flow of remittances.

It is worth noting that Colombia has received more than 1.2 million Venezuelans, according to Migración Colombia, the state agency responsible for regulating the flow of entry and exit of people in the country. On the regulatory framework in Colombia, Beltran believes that it’s highly complex and restrictive, making the work difficult for exchanges or other crypto-related firms that would like to do business within the territory.

Similarities with the European legal model

The Colombian tax entity DIAN considers Bitcoin and digital currencies as material goods, and the Financial Superintendence sees them as an intangible asset subject to income tax, while the Superintendence of Commerce says that they are not a value.

Despite the different concepts that local watchdogs have, the general consensus toward cryptocurrencies in the Latin American country is not far different from the European model.

Javier Pastor, chief sales officer of the Spain-based Bit2me exchange, which has Colombian users on its platform, spoke to Cointelegraph about the similarity of Colombia’s legal concept toward cryptocurrencies with Spain:

“In the eyes of the Spanish Hacienda [the tax watchdog], cryptocurrencies are assets, not money, as the Euro and the dollar are. It is being considered as just ‘exchange.’”

As for how they have been able to penetrate the Latin American market and the problems they have faced, Pastor states that they had no problem with the legal aspect. However, he went on to clarify:

“If it is true that [Latin American] banks have limitations and restrictions to send money to crypto exchanges; the same situation that happens with Spain. [...] We see that there is a problem at a general level, not only in Latin America or in Colombia, regarding the transactions that can be made towards companies like ours, because Bitcoin, for example, represents an alternative monetary and financial system that would remove from the environment to traditional systems.”

On the other hand, Buda’s Colombia country head proposed a legal framework that clears all the ambiguity that surrounds it. As Beltran states, in Colombia’s case, “everything is ready” so that there can be an appropriate environment where cryptocurrency companies can operate without uncertainty in the market.

Media outlets’ role in the boost of crypto awareness across Latam

Although all statistics could point to the idea that the Colombian public knows about the world of cryptocurrencies, Javier Pastor highlights that there is great need to educate the public and state entities about cryptocurrencies:

“The perception I have, not only in Colombia, they don’t know what this new technology is about. What this technology represents for countries is an opportunity to generate wealth and new jobs, in addition to generating a new investment movement.”