Cointelegraph would like to congratulate all the women in the Bitcoin community during International Women’s Day! 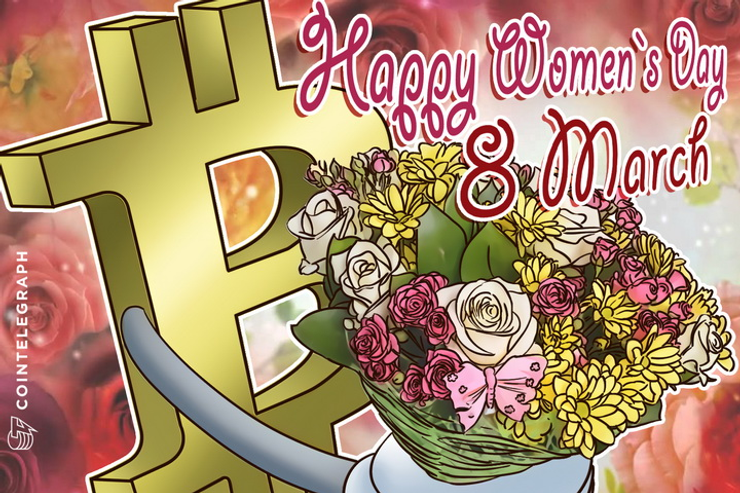 In Bitcoin-related stories, we almost exclusively quote men. However, hopefully one day the situation will change. Cointelegraph would like to congratulate all the women in the Bitcoin community during this year’s International Women’s Day!

It is often said that there are few women in the Bitcoin community, and they never get a lot of coverage. So we want to address this injustice by talking about the “women in Bitcoin”, the awesome ladies who decided to work in the cryptocurrency industry.

Interviewed by Cointelegraph, these women shared their stories and told us how they got into crypto.

Janina Lowisz: Thinking of the future

Janina Lowisz works at Bitnation, providing the same services traditional governments provide, from dispute resolution and insurance, to security and much more, using the blockchain.

Recently, she acted in a trailer shoot by Bitfilm Production for the GTEC Blockchain Contest.

“I first learnt about Bitcoin in January 2013 at an event about the Euro crisis,” says Janina, “I started working for Bitcoin- and later blockchain-related startups 2 years ago. Over time, hundreds of contacts have been built up, and now I am connecting everyone, organising events and helping a few startups. My longest involvement is in Bitnation, which uses the blockchain for governance services”.

She continued, “When looking at people’s backgrounds, we have the problem already there, women simply are less likely to be interested in finance, IT or politics. So there is no surprise, but it’s fine, I mean, you can’t tell people they should start to be interested in something if they’re not interested. I think in the future, when everyone knows blockchain products and uses them daily, and when there are more jobs in blockchain-related industries, then everyone, and therefore more women, will be interested”.

Molly Spiers is the Marketing Manager at CoinCorner, a British Bitcoin exchange serving the UK and Europe.

This is how she told us about her involvement in the Bitcoin industry:

“I first heard about Bitcoin around this time last year, when I applied for my role at CoinCorner. I'd never heard of digital currency before, but after reading up on it, I found it fascinating and knew it was something that I wanted to be involved in.”

Molly suggested this explanation for the lack of women in the Bitcoin field:

In honour of International Women's Day, the CoinCorner logo will be changed to pink for the day, and £5 will be offered in complimentary Bitcoin to women who sign up for a CoinCorner account and deposit £100.

Masha McConaghy: I just bought some Bitcoin, it’s so cool

Masha McConaghy is the co-founder of the Berlin-based startup, Ascribe.

“I first heard about Bitcoin from Trent McConaghy, my husband, when one day in 2011 he came back from one of his meetings with his developer friends,” says Masha McConaghy, “He came in and said: "Masha, I just bought some Bitcoin, it is so cool.”

She followed on by saying:

“[My job in this industry] started with a conversation in 2013 after a gallery visit. Trent was gushing about Bitcoin and the blockchain when I wondered out loud, not for the first time, why it wasn't possible to buy digital art and truly own it. In that moment we wondered if the combination could help pull art ownership into the 21st century and ascribe was born.

I do not consider myself working in the Bitcoin industry per se, but more in the Intellectual Property sector. At ascribe, we are leveraging the Bitcoin blockchain technology in order to address a very specific problem of ownership of digital content in the digital age. The questions we wanted to address when we started ascribe were: How do you "own" something when bits can be easily copied and spread in seconds on the Internet? Questions about how artists make a living in this new world or get proper attribution of their creations.

I am actually very happy that within my IP sector of the blockchain world, there is a healthy balance. I deal a lot with extremely smart women in the art world with whom I have quite visionary conversations about how technology can and will change our industry and our lives. On the strictly tech side, unfortunately I do not meet a lot of women but I hope that that will change soon. Studies have shown that there are more women studying IT and computer science than ever before. Even if it's gradual, I do see a change coming”.

Laura Shin: Women tend to be socialized away from Fintech

Laura is a freelance journalist, and a writer for Forbes, covering Bitcoin, fintech, and personal finance. This is how she shared her story with us:

“I wouldn't say I work in the Bitcoin industry, but I communicate regularly with people who do. I started hearing more about Bitcoin and wrote a few articles here and there about it. There is an economist at Stanford whom I admire (Susan Athey), and so I interviewed her about Bitcoin and digital currencies for Forbes, and that conversation taught me much more about the subject. Then last year, Forbes asked me to manage its Fintech 50 list along with another reporter, and we divided the list into categories. I took digital currencies, and through reporting on that sector, I began to realize there was a bigger story, and that is how I came to write a big magazine feature about blockchain coming to Wall Street, with Chain and Nasdaq as the main protagonists. That came out in September.”

Laura continued, “I think it's just an extreme example of the larger effects of socialization in our society. We vetted more than 300 companies for the fintech list, and maybe five of them were headed up by women. The dearth of women was so severe I began to have visions in my head of babies being born and placed on conveyor belts to different industries and careers based on their gender and race. Women tend to be socialized away from both technology and finance, which explains why so few women are in fintech. (I think this is changing for younger generations but it will be a long time until we see that have any effect on the industry.) I think Bitcoin, due to the cryptography, math and programming aspects, is an even more extreme type of fintech. It's certainly a frustrating situation, one that I would like to see change mostly so I'm not quoting only men in my stories!”

That said, we want to thank all the women involved in the Bitcoin industry, and of course all the beautiful women who