The EIP-999 proposal to restore the 513,774 ETH frozen in the Parity multi-sig library since last fall has been rejected.

A week-long vote on a proposal in regards to the Parity hack wallet reversal, which proposed to restore a disabled contract to unfreeze 587 wallets holding 513,774.16 Ethereum (ETH), equal to around $360 mln at today’s prices, has ended with a majority “no” vote today, April 24. 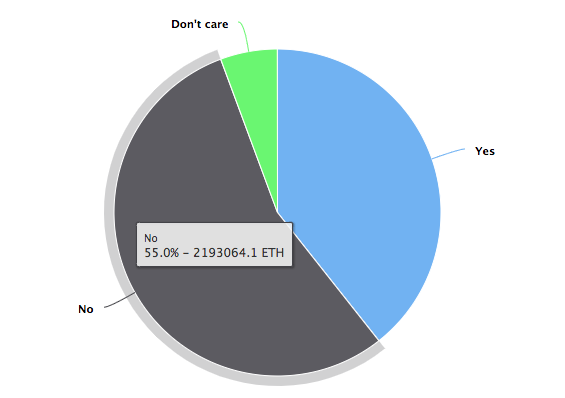 In November of last year, a Parity user “accidentally killed” the Parity multisig library by activating a vulnerability to become the owner of the library, and then self-destructing it. Prior to that, the library had been “fixed and re-deployed” with the vulnerability after Parity was hacked of around 150,000 ETH in July 2017.

In response to the accidental freezure of the ETH funds, Parity wrote in a blog post that they are working on Ethereum Improvement Proposals (EIP) that could propose ways to unblock the funds.

EIP-999 presented on April 4 and written in regards to the frozen ETH “suggests restoring the WalletLibrary by a patched version to allow the owners of the dependent multi-signature wallets regain access to their assets.” EIP-999 received 330 “no” votes, 300 “yes” votes, and 9 “don’t care.”

Voting was a “coin vote,” which in this case allowed those with the dead, affected wallets to be able to vote with the ETH in those wallets just by signing the message, according to a Reddit post by user x_ETHeREAL_x. Before the vote was over, x_ETHeREAL_x posted that “the reason "yes" is winning has nothing to do with community sentiment”

“It is Parity, the original ethereum foundation members now part of parity, and even their own self-destructed wallet voting. Do not be fooled -- this has nothing to do with "community" sentiment!”

The debate over whether to return lost or stolen funds to users versus maintaining the immutability of the Blockchain has been around since the DAO hack of around $60 mln in June of 2016.

The subsequent fork to restore users’ money led to a split off of Ethereum Classic - which kept the money with the hackers - by crypto enthusiasts that believed a return of the funds via a fork shouldn’t be used in any case.