Last week, Cointelegraph reported that KuCoin’s primary web domain, Kucoin.com, had been locked by a Singaporean court. In a statement posted on its website and in its public Telegram channel throughout the past week, KuCoin alleged that our reporting was “unverified” and “untrue.” In response, Cointelegraph is now publishing further evidence of its original reporting.

Authenticity of the email: Confirmed

In the original article, Cointelegraph contributor Andrew Capon published a screenshot of a GoDaddy email showing that the web domain registrar is complying with a court order issued by the High Court of Singapore. Cointelegraph has since obtained the original email file of the message sent by GoDaddy. 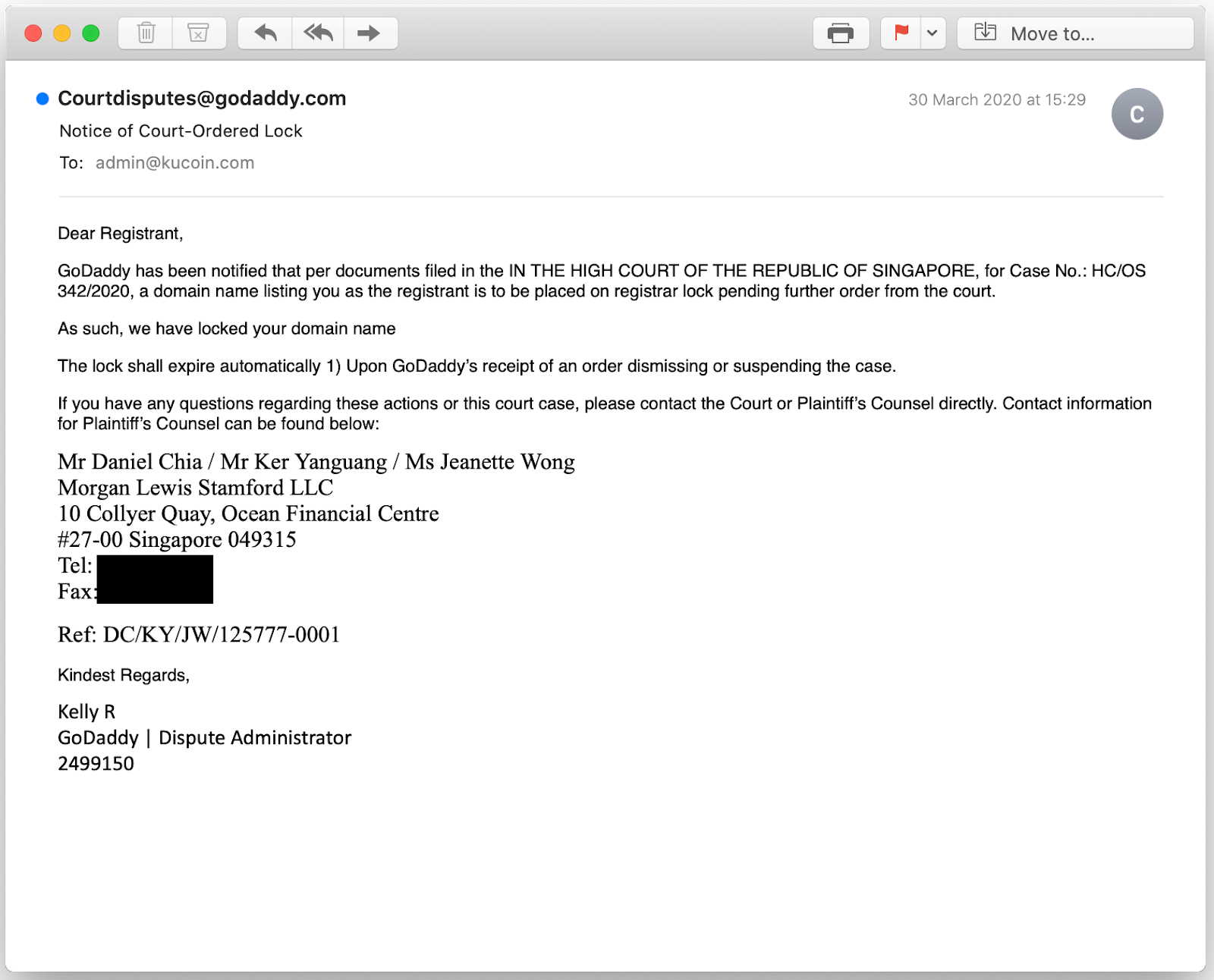 The email from GoDaddy to KuCoin, showing its domain locked by court order in Singapore

Using the new file, we were able to authenticate the cryptographic signature in the email headers, proving that the email we obtained did indeed come from the email address Courtdisputes@godaddy.com. GoDaddy definitively sent the email Cointelegraph reviewed to email address admin@kucoin.com.

GoDaddy did not respond to a request for comment from Cointelegraph.

A domain lock is distinct from a domain block — kucoin.com is still accessible in Singapore. The significance of a domain lock is that the domain cannot be transferred, preventing the current owner from transferring control of the domain to another entity.

The court order: What we know and don’t

Due to the particulars of the Singaporean court system, the full contents of the court order are not publicly available at present, nor is the original complaint in the case. However, using Singapore’s eLitigation database, Cointelegraph was able to verify the existence of an “order of the court” issued by Justice Kannan Ramesh in case number HC/OS 342/2020 — the same case number referenced in the GoDaddy email. That order was issued on March 24, 2020 — six days before GoDaddy’s email. 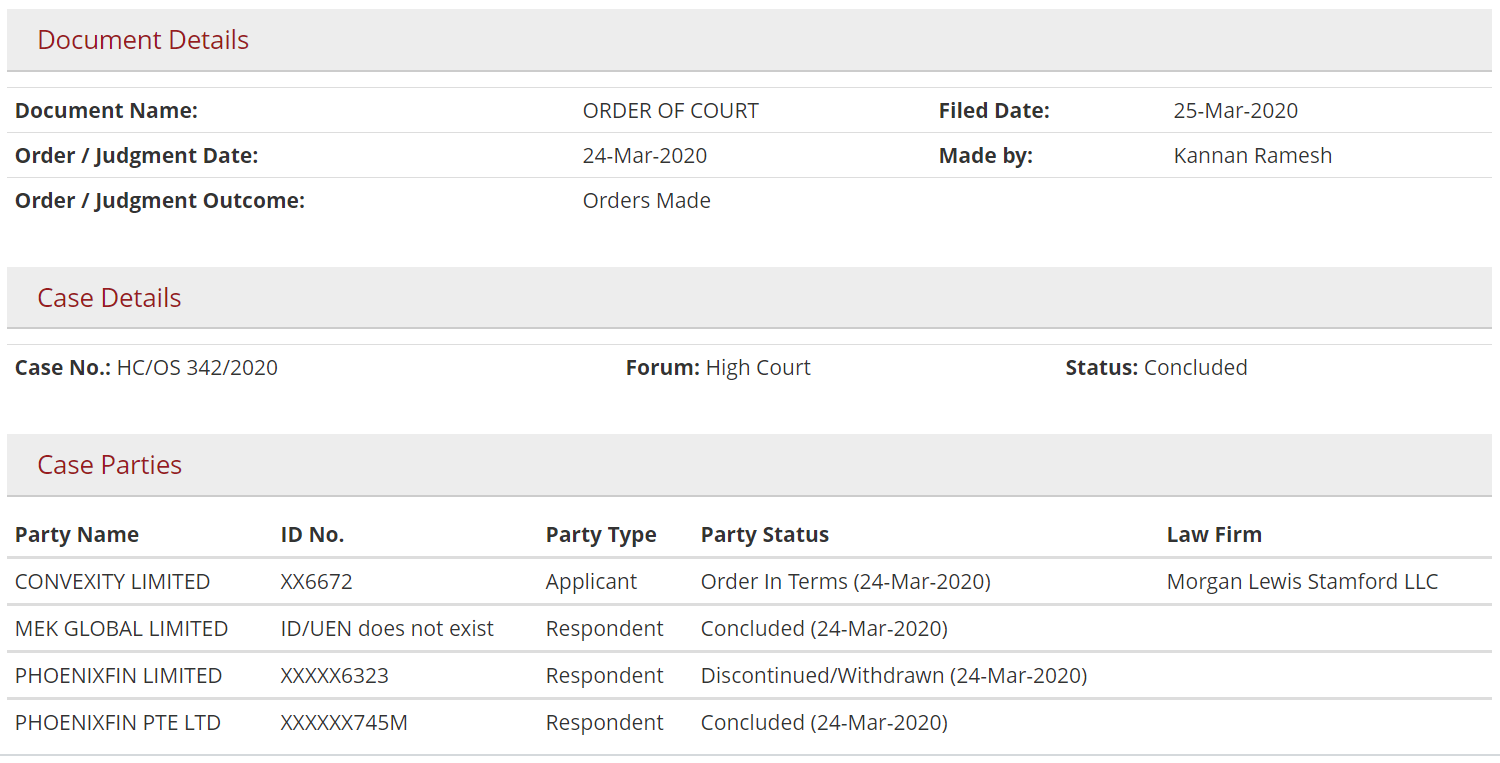 The defendants listed in that case are: MEK Global Limited, PhoenixFin Limited, and PhoenixFin PTE Limited. As Cointelegraph previously reported, these entities have been passing trademark rights for the Kucoin logo between themselves for some time, though they share addresses — including Fortunate Icon, unnamed in the recent court order.

Moreover, PhoenixFin PTE is the current owner of the Kucoin.com domain name, per the Internet Corporation for Assigned Names and Numbers, which lists that company’s address as just “Singapore, Singapore.”

Neither KuCoin representatives nor any of these individual entities responded to requests for comment for this article.

According to the publicly available database, the plaintiff in the case against KuCoin is Convexity Limited. Documentation is limited, but a Gibraltar-based Convexity shares a name as well as the last four digits of its identification number with the Convexity in the court order.

Cointelegraph reached out to Convexity, but the firm did not respond by press time. An individual familiar with the matter told Cointelegraph that Convexity provided cyber-security services to KuCoin under a long-term contract.

KuCoin’s legal trouble in the U.S.

Meanwhile, in the U.S., KuCoin was one of a fleet of firms in the crypto space targeted by recent class action lawsuits in New York’s Southern District.

To all appearances unrelated to the case in Singapore, the suit in New York alleges securities violations in Kucoin’s listing and promotion of a number of tokens during the initial coin offering frenzy of 2017-2018:

“KuCoin participated in illegal solicitations and sales of securities for which no registration statement was in effect, and as to which no exemption from registration was available.”