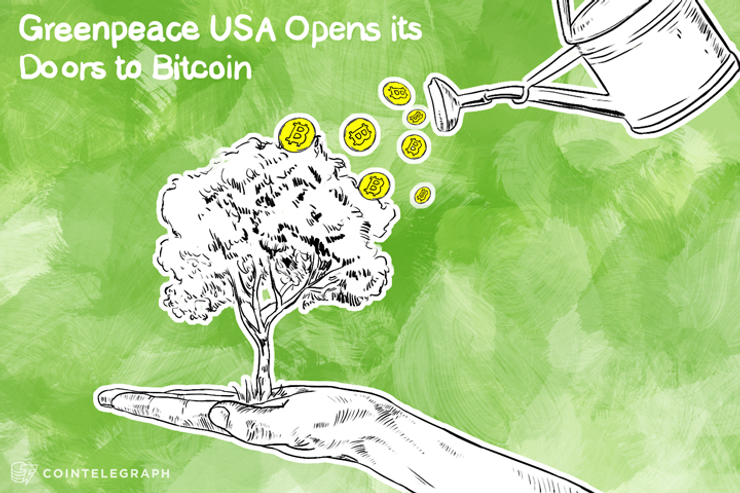 The number of non-profits who are now accepting Bitcoin for donations seems to be growing at a near weekly rate. Last week Coinbase announced that it would be adding the United Way to its list of Bitcoin accepting charities and now this week the largest environmental group on the planet has  agreed to begin accepting Bitcoins as well, but have chosen BitPay rather than Coinbase for its payment platform. There have also been several dozen other, smaller, non-profits that have begun accepting Bitcoin and more than a few political campaigns.

Greenpeace, one of the most well-known organizations in the world, has announced they will begin accepting Bitcoin donations. They are famed for the great work they do protecting our environment as well as their aggressive treatment of illegal polluters and poachers. The group has been in the news many times for confrontations with fishermen and corporations on many occasions in the past. It is non-profit and tax-exempt and its donations go toward “increasing public awareness and understanding of environmental issues through research, the media and other educational programs”. The Greenpeace Fund also provides grants that help support their core work around the world through local activities. Greenpeace USA Director of Online Strategy Ben Kroetz said in a statement:

"As a completely independent organization, we do not take money from corporations or governments and rely primarily on individual donations. BitPay’s reputation as a trusted and secure third party bitcoin payment processor made it easy for us to begin accepting bitcoin thus opening us up to new markets and donors.”

The tax man may forgive non-profits their taxes but banks want their money and they want it now. Merchants are not the only ones who must pay banks a discount rate (percentage of the sale ranging from 1% to as high as 5%). Anyone who accepts payment from a credit card or bank debit card must pay this rate. When merchants, or charities, accept Bitcoin instead of dollars, they only pay the virtually non existent miners' fee and by going through BitPay, can receive payment to their wallet as Bitcoin or to their bank account as dollars.

Unlike the banks and companies like PayPal, BitPay offers Bitcoin payment processing services for non-profits completely free. This means no transactions fees, no monthly service fees and, most importantly, no discount rates. The company is one of the global leaders in virtual currency payment processing and has raised more than $32 million investors.