7585 Total views
170 Total shares
Listen to article
0:00
Follow up
Own this piece of crypto history

While the Indian government is uncertain about the use of cryptocurrency, the National Payment Corporation of India, or NPCI, officially announced its permissioned blockchain-based platform, Vajra, to make the payment process easier, faster and more transparent.

After detailed research, the NPCI has developed a distributed ledger technology mechanism to provide a highly secure, tamper-proof database for various payment procedures.

The NPCI is an umbrella organization for retail payments and settlement systems in India. It is an initiative of the Reserve Bank of India and Indian Banks’ Association under the provisions of the Payment and Settlement Systems Act 2007, aimed at creating a robust payments infrastructure in India.

Vajra is a permissioned blockchain-based platform. Only a registered party under the network administrator can be part of the blockchain network. There will be three types of nodes on the platform. 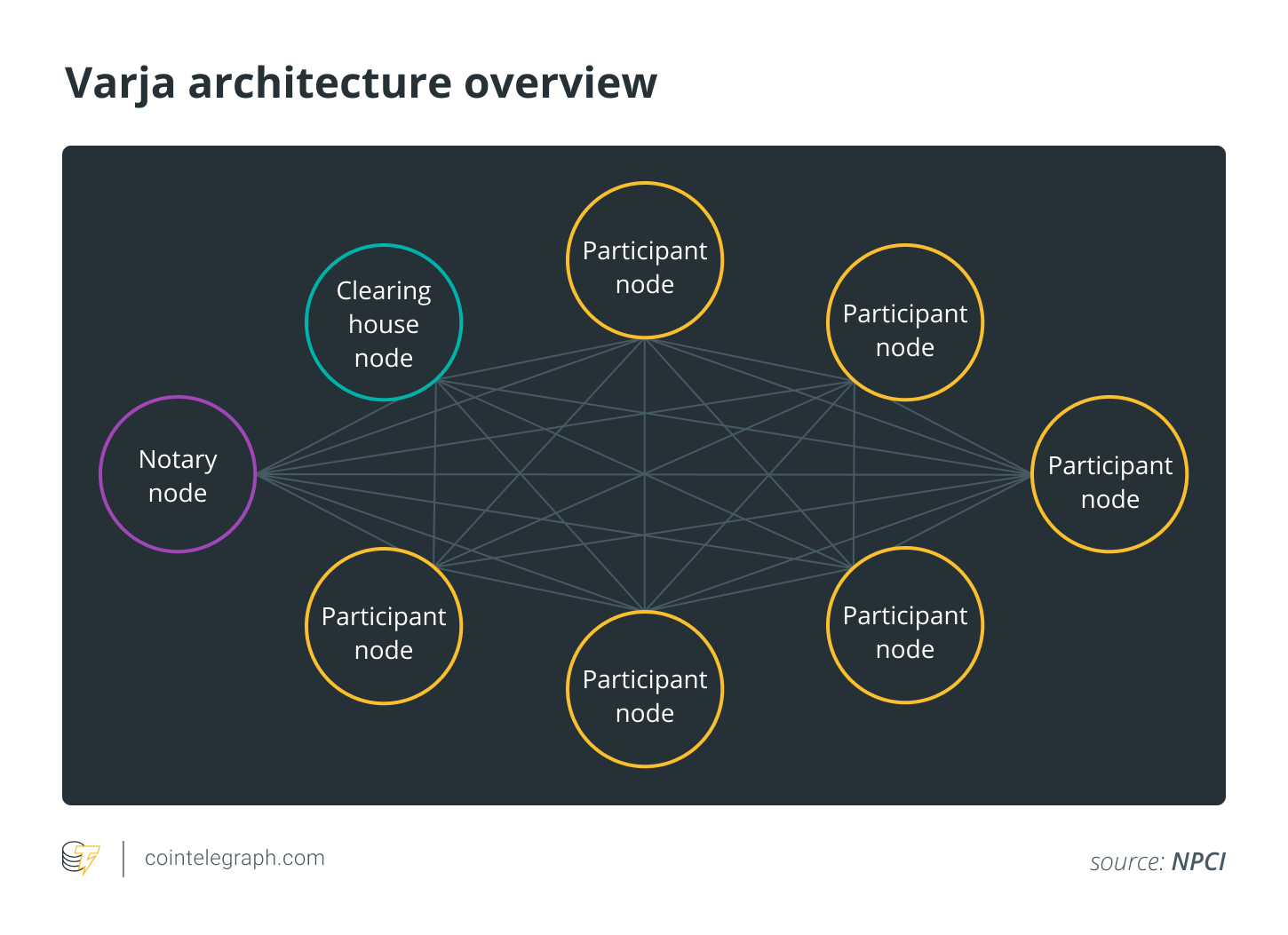 The Clearing House node holds the right to add a new node on the platform. Each external party interacting with the platform participants will be authenticated by the node. The Vajra platform takes care of security in data access and API interactions with key management and defined security procedures.

Bank nodes receive requests from APIs and process them through Vajra. The system has self-executing contracts containing business rules in the form of smart contracts. After successfully processing the request, the on-chain data will be added to the ledger. The NPCI explains it in five simple steps:

First, when a user initiates a transaction on the Varja app, MicroATM, through online banking, at a point of sale or through e-commerce, the request for payment, collection or deposit comes to the server of the issuing bank, payer or payee. Then, using DLT, APIs or adapters, the bank or nodes receive the transactions and record the same on the blockchain platform.

Smart contracts running on the Varja blockchain validate and trigger transactions based on predefined business rules. The fourth step involves recording transactions (debit and credit) on the blockchain upon successful clearing. As per viewing rights, the Clearing House and Participant nodes see the transaction information recorded on DLT. Finally, every 15 minutes, the NPCI creates clearing files and fees from the DLT and posts it to the Reserve Bank of India for settlement processing.

The Vajra platform seeks to ensure zero or minimal processing time for reconciliation and faster dispute resolution while implementing cryptography to increase the security of payment transactions.

Sumit Gupta, co-founder and CEO of Indian crypto platform CoinDCX, told Cointelegraph that this is a good move by the NPCI, as India could become an example to the rest of the world by embracing the online payments ecosystem, adding that:

“Starting this journey on a permissioned blockchain makes eminent sense to test the network operations of different types of nodes and the transactional activities conducted by the customers. At the time when China, Uruguay, Turkey, Thailand, Sweden, France etc. are have already started working on their pilot projects to bring their own Center Backed Digital Currencies (CBDCs), NPCI coming up with an entire payments platform which is secure, tamper-evident, and versatile is exemplary.”

When it comes to payment-related disputes, possible issues may include technical errors, declining to process a transaction on a technical basis, or even declining to conduct business. Vajra deals with all these issues in real-time data and solves the intermediary issue. Currently, the clearing and settlement process involves multiple unrelated parties transacting with each other, which requires some level of intermediation from a centralized regulator.

Data on a blockchain gets stored in a block over the public ledger, which means that every participant has a copy of the entire chain. So, what are the changes to be made from the banks for proof-of-concept? Regarding this, the NPCI said:

“No changes are required from the Bank infrastructure. The banks have to whitelist the Vajra adaptor IPs and ports. Banks have to generate the transaction for the corresponding banks which are part of the POC.”

The NPCI’s development of a permissioned blockchain platform is considered a positive step by the Indian fintech industry. Nischal Shetty, founder of WazirX — an Indian cryptocurrency exchange acquired by Binance a few months ago — told Cointelegraph that the NPCI conducts deals with a closed set of companies and does not require participation from the general public, so a permissioned blockchain is an ideal solution. As for a public blockchain, Shetty believes that there is a need for cryptocurrency, saying:

“Someday, Indian banks could have an INR Stablecoin that can be used by anyone across the world. This would drastically increase the use of rupees online thus leading to a stronger rupee.”