Here’s everything you wanted to know about how the Indian government addresses cryptocurrency.

The Income Tax Department of India is secretly training its officials to investigate cryptocurrencies. An internal guidebook circulated by the department explains cryptocurrencies, their characteristics, the “dark side of Bitcoin” and the best investigation practices for tax officials.

The Indian government doesn’t consider cryptocurrencies as legal tender, but it also hasn’t declared them outright illegal. Crypto investors are therefore still doubtful on how to show their investments in their annual income tax returns. Due to all these circumstances, earning through cryptocurrencies is a gray area for the Indian crypto community.

Earlier this year, the Income Tax Department sent detailed notices to some cryptocurrency investors. The department asked for details on the last three years of their income tax returns, credit and debit card transactions, as well as their investment in Bitcoin or other cryptocurrencies. The department asked a total of 26 questions, and 21 of these were related to crypto investment, transacting on cryptocurrency exchanges, using paid services via cryptocurrencies, using crypto wallets, and other topics related to crypto. These were some of the questions:

Previously, in 2017 and 2018, the tax department sent notices to thousands of crypto investors and traders. The department also previously surveyed major crypto exchanges to collect the details of individual crypto traders.

So, how does the department design these detailed, in-depth questions? The answer lies in a guidebook titled “Introduction to Crypto-currencies and Forensic Examination of Bitcoin,” created by India’s Central Board of Direct Taxes. The nation’s income tax department has been training its officials since 2017 to investigate cryptocurrency investment. 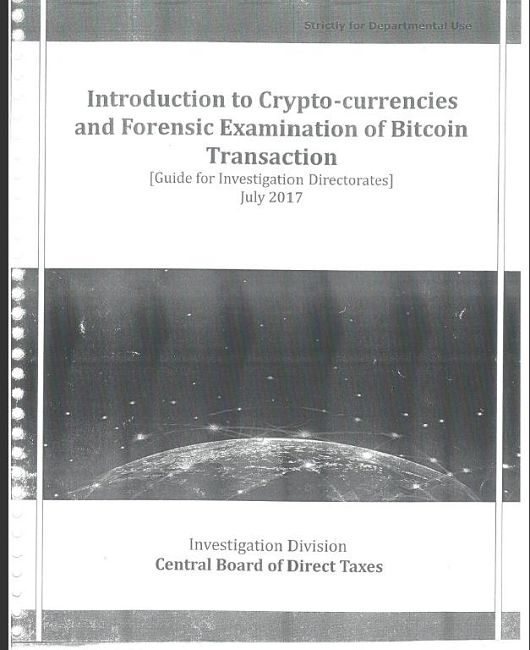 The first four chapters of this book deal with the origin of cryptocurrencies, public key cryptography, Bitcoin basics, mining, 51% attacks, block rewards, and transaction fees. It states that virtual currency is a digital representation of value, but does not have status as legal tender in any jurisdiction. It continues by saying that it is neither issued nor guaranteed by any jurisdiction, and it fulfills different functions only by agreement within the community of users.

The book explains different terminology in-depth and concludes that the terms “virtual currency,” “digital currency” and “cryptocurrency” have distinct meanings.

The book states that the Indian Bitcoin market has seen steady growth over the last few years. There are some well-designed websites that offer multiple investment options. Others operate on the dark web, mostly through social media accounts. According to the book, there are 297 locations spread over the country where people actively engage in Bitcoin-related trade. All these people can be tracked, the guidebook claims. A total of 9,408 cities are active locations for crypto-to-cash transactions. 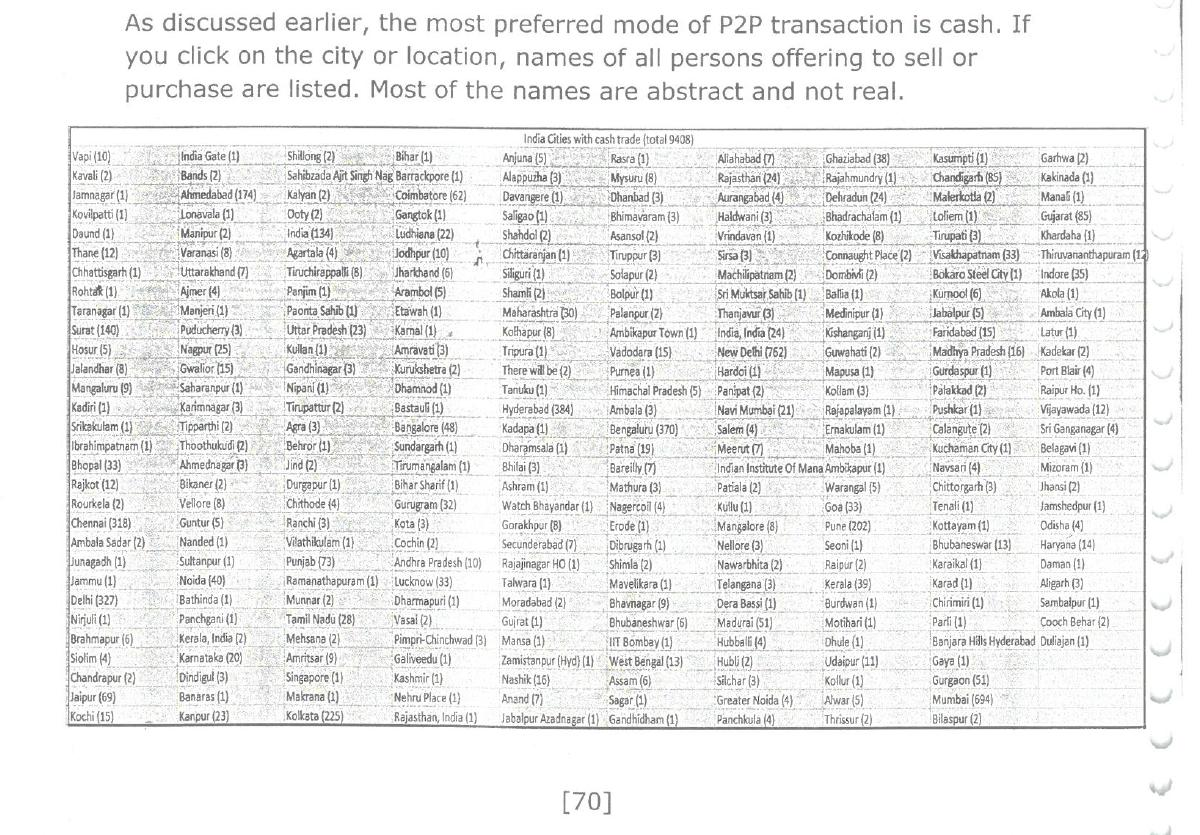 Are you doing crypto-to-cash transactions with tax officials?

The tax department also created some fake accounts to investigate crypto traders in India, a source said. The book also supports this and puts down some real examples of how someone can investigate traders on the platform LocalBitcoins. As this platform does not require much proof of identity, it is home to a lot of illegal trading.

According to the book: “Let's see a case of Bittu Sharma. He is on a local Bitcoin forum and willing to buy Bitcoin in cash near Delhi. He put his bank details and contact number there, and by investigating, an authority reveals his real name as Prashanna.”

Tax officials are using tools like Blockexplorer.com and Blockchain.info, which provide insights and search capabilities for tracking transactions in a shared public ledger or blockchain. This can lead to a user’s IP address and yield valuable information about the user’s location. The guidebook includes some screenshots to show a step-by-step search of Bitcoin address on these blockchain websites.

The guidebook also analyzes the effect of India’s November 2016 demonetization, in which the government stripped 500 and 1,000 rupee banknotes of their status as legal tender.(It replaced them with new 500 and 2,000 rupee notes.) During this time, people may have converted their black money into Bitcoin and hidden it in the semi-anonymous world of cryptocurrencies.

Third parties or intermediaries like Bitcoin exchanges, traders and processors are important sources of evidence for establishing trader identity, transactions undertaken, the identity of counterparties, the related bank accounts used and so on. Tax officials track such platforms (and their client lists) to find people trading Bitcoin or other cryptocurrencies.

The Income Tax Department also investigates other social media platforms like blogs, forums, Bitcoin Talk, Bitcoin Forum, messenger apps and the like to find more clues. According to the book, there are some established characteristics of a potential cryptocurrency user: 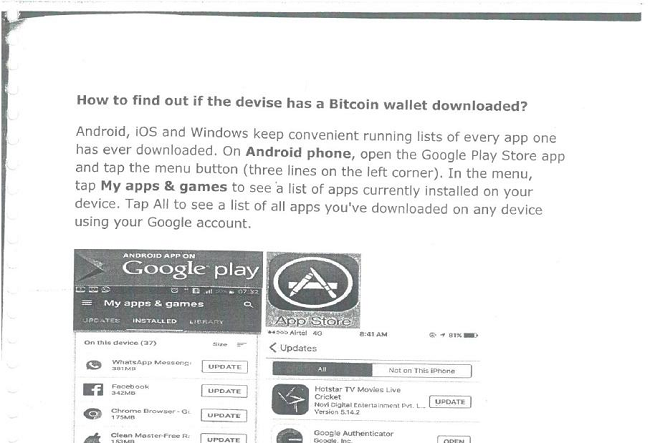 Here comes the most interesting part. The book states that if officials discover irregular activity with any offline or online wallet linked to an investor, they should issue a prohibitory order u/s 132 (3). If the investigation proves that the source is unexplained or represents unaccounted income, an intermediary can be directed to convert crypto into Indian rupees, which can be seized.

If this is an on-chain or online wallet:

It also suggested that the Income Tax Department should have its own official wallets to transfer the person’s seized crypto holdings.

The department’s been preparing for a long time

On April 6, 2018, the Reserve Bank of India circulated a notice and asked banks not to provide any services to individuals and companies associated with digital currencies. But the tax department was planning to strengthen its workforce long before. The printing and publication wing of the Directorate of Income Tax released an open tender notice on Dec. 13, 2017, with the subject line “Inviting sealed quotations for publishing of book titled ‘Introduction to cryptocurrencies and forensic examination of Bitcoin transactions.’” 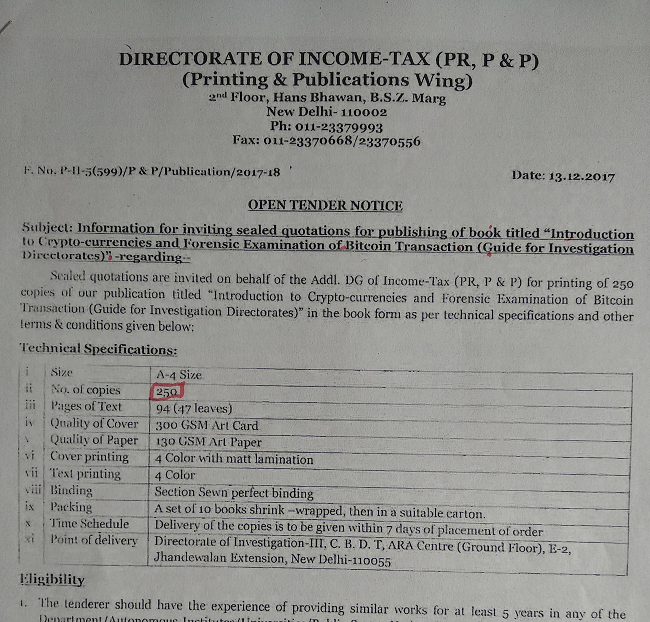 As the aim of the book was to train Indian tax officials on cryptocurrencies and related investigations, the tax department decided that the book should not become public. When asked about the existence of such a book via the Right to Information Act 2015, the department confirmed that this book was circulated, but declined to provide a copy.

Anoush Bhasin, founder of tax advisory firm Quagmire Consulting, said that given the significant value that Bitcoin has generated in the last decade, it was bound to garner interest from tax authorities around the world. He said, "As far as India is concerned, the existing direct tax laws are squarely applicable to crypto asset transactions. The nature of income and exact disclosure depends on the type of transaction. In line with this, we have been encouraging and assisting Indians dealing with crypto assets to comply with income tax laws."

The author works as a journalist for a major Indian business newspaper and managed to get this guidebook through his sources.