Transparency, traceablity and everything else blockchain could provide for the agriculture.

Agriculture is proving to be one of the most promising sectors for the growth and implementation of blockchain technologies. The mammoth industry suffers from a number of endemic issues. Agricultural trade relies on complex relationships between farmers and retailers, as well as convoluted supply chain procedures which can complicate payments and product providence. As demand for agricultural trade becomes increasingly international, suppliers and innovators alike are looking to bring the trade into the twenty first century by capitalising on blockchain’s distributed ledger technology.

What blockchain can do for transparency and traceability

One of blockchain’s most commonly promoted attributes is transparency. GlobalData’s How Britain Shops survey reveals that consumers are increasingly concerned with the quality of the food they purchase from retailers. In a time where knowledge about food and nutrition is rapidly expanding, blockchain gives shoppers the ability to track the origins of store stock, helping them to guarantee purchasing a safe, quality product. Retailers and manufacturers are able to benefit from preventing flawed products from ever hitting the shelves by tracing information for individual items back to the farm where they were produced. Although this technology is in its early stages, the French retailer Carrefour has implemented blockchain to display information about their free-range chickens, the Retail Insight World reports. Customers have access to a plethora of data about their fateful chicken of choice, including the time it was laid, the hatchery and the name of the farmer.

The benefits, however, are not limited to the consumer alone. In recent years, a number of incidents regarding the quality and providence of products shook consumer faith in food suppliers, such as in 2013, when products advertised as containing beef were actually revealed to contain horse meat. Suppliers, however, appear to be learning from past industry mistakes. Kelly Registration Systems, the software unit for Kelly Products, a US based agribusiness company, announced the launch of their blockchain based platform to increase transparency in the United States meat industry.  Stuart Edmondson, chief technology officer at Kelly Registration Systems told Systems told the Verdict:

“Utilising blockchain technology for our new tracking system gives producers the opportunity to streamline their protein tracking and make it extremely accessible and transparent."

Through radio frequency identification (RFID), customers will have access to a wealth of information, such as breed, sire, sex, vaccination details, hormones or antibiotic treatments along with data surrounding the animal’s growth, meaning it’s not only Carrefour’s chickens whose life trajectories are going public. Although this system has only been launched on a small scale, CEO Keith Kelly said the company plans to include other suppliers and expand across the region.

In 2017, food giants NESTLE, Unilever, Walmart Inc and Dole partnered with IBM to develop a blockchain system called Food Trust, based on the idea that partners and competitors should maintain a single-record keeping system. According to Nestle’s global head of supply chain, Chris Tyas, the companies agreed that blockchain can help improve safety measures on the condition that industry leaders collaborate. Failure to do so would create vast quantities of unmanageable data due to the many parties involved in the food industry supply chain. IBM is also set to release a mobile app to permit farmers to enter information into the Food Trust database, the Wall Street Journal reports.

This initiative also comes under the auspices of building consumer trust and eliminating the chances of contamination and product misinformation as a result of traceability. Scandals surrounding food supply result in lengthy investigations, such as the fatal 2017 salmonella outbreak that stemmed from a contaminated papaya farm in Mexico.The transparent, instantly available nature of Blockchain technology can reduce the investigation process to a matter of seconds, potentially halting the current precautionary measures of mass product recall and the culling of huge swathes of livestock.

Governments open the door to blockchain

The Sustainable Sugar Project has received a grant of A$2.25 million from the Australian government, Foodnavigator-Asia reports July 30.

Led by the Queensland Cane Growers Organization, the project will also use blockchain technology to track the origins of their supplies back to Australia in an industry wide effort to improve sustainability and traceability.

“This technology would provide assurances around the sustainability of our sugar and ensure cane farmers using sustainable practices can attract a premium for their product.”

Meanwhile, on the other side of the world, The Agricultural Bank of China (ABC) has issued its first loan on blockchain, Financial News reported July 31. ABC is the world’s fourth-largest bank by assets and is one of China’s “Big Four” lenders.

The ABC’s first loan issued on blockchain is worth around $300,000 and is backed by agricultural land in the Guizhou province.

The bank plans to “buil[d] blocks with local people, pilot land and resources bureaus, and agriculture and animal husbandry bureaus” through blockchain”.

One other avenue for future development is the creation of a transparent land registry. Blockchain technology is also being used by the bank to prevent clients applying for loans from different banks while using the same land as collateral.

Square Peg Capital has invested $5.5 million into Australian blockchain startup Agridigital. The startup has built a private blockchain to improve supply chain finance, with over 1300 users and 1.6 million tonnes of grain transacted since December 2016, along with $360 million in grower payments. Square Peg Capital hopes to expand the system into the United States.

“At the moment supply chains are archaic, and the opportunity for a distributed supply chain with multiple participants lends itself extraordinarily well to distributed ledger technology, but also any form of material improvement."

According to Business Monitor Online, blockchain could also reduce the time it takes for farmers to receive payment, along with payment uncertainty. The technology has helped traders match payments with title transfers by linking them, thereby avoiding any threat of counter-party risk (i.e. the risk that the other party involved in the financial contract will default on their contractual agreement).

In the words of Adrian Turner, CEO of The Commonwealth Scientific and Industrial Research Organisation’s (CSIRO) specialist Data61 unit, blockchain has the potential to:

"Not just to integrate information exchange and improve operational efficiencies across a diverse industry, but also to improve supply chain quality, facilitate provenance of branded goods and reduce cost of regulatory approvals."

Data61 provides a useful example of how the supply chain system could be improved through blockchain: 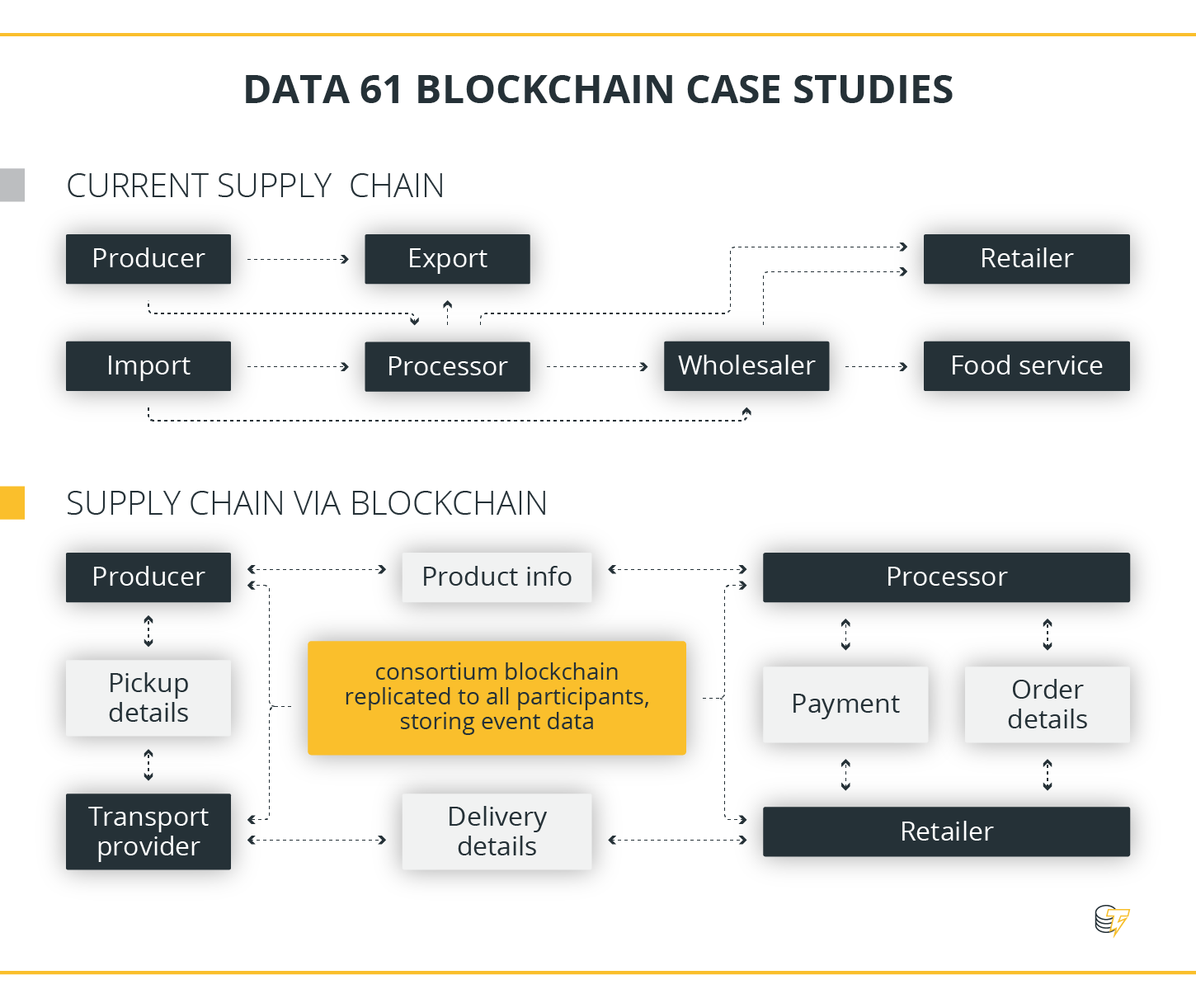 “The additional financing costs that suppliers incur because they aren’t being paid promptly work their way back into higher prices for consumers.” V.G. Narayanan, Chief of the accounting practice unit at Harvard Business School told the New York Times.

The use of blockchain seems set to improve efficiency in agribusiness, not only improving transparency and cutting out the middle man, but also leading to potential reductions in cost.

Several successful deals have now been carried out using blockchain, including the shipping of 17 tonnes of almonds from Australia to Germany, underpinned by the use of smart contracts and a geotracking Internet of Things (IoT) to deliver end-to-end movement of the produce.

60,000 tonnes of US soybean were sold to the Chinese government in 2017 via the use of the Easy Trading Connect blockchain prototype, Business Monitor Online reported. According to participants, the time spent processing documents thanks to the use of electronic smart documents was reduced fivefold.

The Jury is Still Out Over a Blockchain Solution

In spite of the many positive developments and promising applications of blockchain in agribusiness and food supply sectors, a number of perceived weaknesses in the technology have been pointed out.

CSIRO’s Data61 listed a number of concerns in a 2017 report. Data 61 stated that information placed into a blockchain that cannot be changed elevates the risk of “toxic data” being locked into the system. The unit also highlighted that this same flaw could lead to sensitive metadata being compromised. Though the blockchain itself might be immutable, IoT devices are not impervious to manipulation.

Data 61 also said that blockchain could be more expensive than current systems if used to carry out “smart contracts” due to the well known energy consumption of blockchain technology. The unit also expressed concern over whether blockchain was suitable for such large information databases and stressed that the technology cannot yet be implemented in isolation from other existing cloud-based or in-house systems.

While there are many benefits of transparency in terms of reducing costs and improving customer confidence, blockchain presents opportunities for previously hidden instances of poor animal welfare, sub-par producing processes and use of chemicals and pesticides to backfire for producers of low-cost products, Business Monitor Online reports. The research organisation also said that the technology is still too immature to be put in place for at least three to five years, emphasising that most trials have been limited in scope and are not capable of dealing with the intensity and global reach of 21st century agribusiness.

Concerns have also been voiced regarding the technology’s reliance on all parties to be actively involved in the supply chain for it to work, meaning that if the input of data breaks down somewhere from farmer to customer, blockchain could fail to live up to its questionable reputation as an all encompassing solution to agribusiness’ woes.

In spite of warning about the dangers of potential oversupply of competing platforms that could cause confusion if developers do not coordinate along with the current absence of overarching regulation, Data 61 CEO Adrian Turner said blockchain technology has vast economic potential and is “here to stay”.