Square reports that Bitcoin composed the bulk of Cash App’s revenue in the first quarter, though it added much less to profit.

On May 6, Square released its filings for the first quarter of 2020. The filings publicized revenue for Square’s Cash App, a majority of which came from Bitcoin.

The numbers for Q1 and Bitcoin’s role

$306 million of Cash App’s $528 million revenue for the first quarter of the year came from Bitcoin.

Despite those numbers, Bitcoin composed a small fraction of Cash App’s profit, only $7 million of $183 million total profit. The company explained why it separated Bitcoin revenue as being more of a core mission:

“We deduct bitcoin revenue because our role is to facilitate customers’ access to bitcoin. When customers buy bitcoin through Cash App, we only apply a small margin to the market cost of bitcoin, which tends to be volatile and outside our control.”

Changes over the year amid COVID-19

Cash App reported a 115% increase in profit year-over-year. In an investor call on May 6, a member of Square’s team credited “efficient new customer acquisition,” which usually translates to good marketing and ease of use. 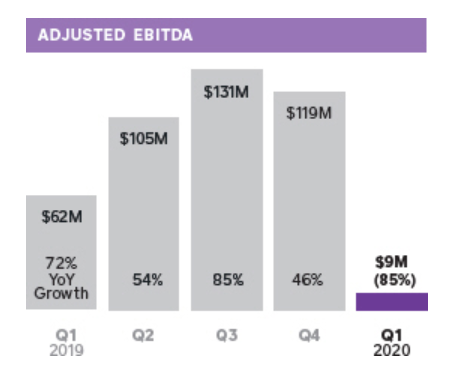 The numbers for investors were less rosey, with earnings before interest, taxes, depreciation, and amortization slipping from $119 million in Q4 to $9 million this quarter.

On the same call with shareholders, executives including Jack Dorsey emphasized Square’s performance in January and February rather than March, when the Coronavirus pandemic began ravaging markets.

Dorsey praised the company’s “agility” amid this economic crisis. His colleague noted “We are encouraged by Cash App’s performance in April.”