The game will be launched on EOS platform first. The Ethereum blockchain platform is planned to be connected in the upcoming months.

Crypto game developer 0xGames, creator of blockchain-based space strategy 0xUniverse has created a new multi-blockchain competitive battler, titled 0xWarriors. The company says that 0xWarriors is one of the first multi-blockchain based games where players can use different blockchains, starting with EOS and Ethereum, for interactions with each other and equipping their characters.

0xWarriors is a multiplayer game where users can fight, take part in weekly tournaments and equip themselves with different items that they collect or trade in an internal marketplace. 0xGames announced that 0xWarriors will be launched on the EOS platform first, and the Ethereum blockchain platform will be connected to the game in upcoming months. According to the game developer, this will make 0xWarriors one of the first multi blockchain-based games on the market.

0xGames says that normally multi-blockchain games have a divided player base and users can’t really interact between each other within the game or exchange assets between blockchains. “0xWarriors has a true approach to multi-blockchain,” the company said. That means that users can obtain different items for their warriors from different blockchains. For example, they can possess an EOS sword and an ETH shield. 0xGames promises that it won’t matter on which blockchain the tokens are located - players will be able to use all digital assets at any time.

0xGames believes that the combination of the two ecosystems will unite two different audiences into one game world where the players can trade playable items. They announced that there are five warriors in one squad, and each user can have up to 10 squads. The warriors are free but the equipment needs to be won or purchased. Using these items, players can uniquely style their characters and each item also has unique attributes that enhance performance in battle. 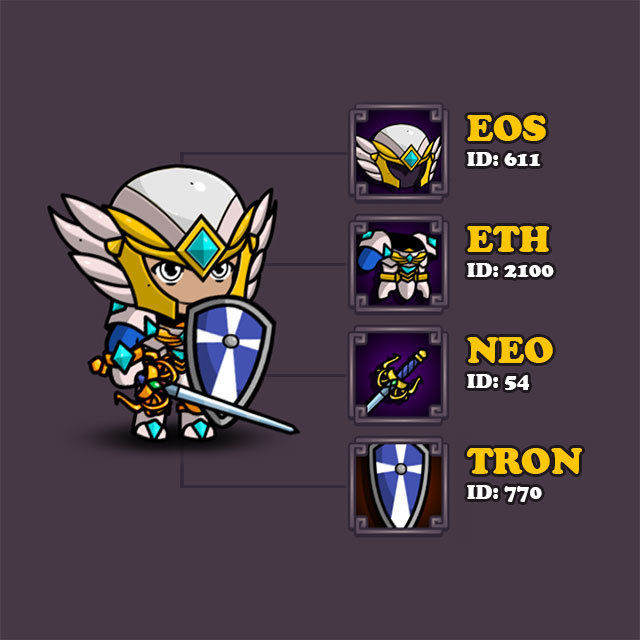 0xGames plans to keep the player base active and entertained by organizing private and public multiplayer tournaments. Those tournaments will be live-streamed on platforms like Twitch or blockchain alternatives. The final three participants will get special bonuses, a percentage of the revenue collected from the event and free chests with items. Armors, items, and warriors differ by a variety of parameters. For example, items have four different levels of rarity: common, rare, epic and legendary. There are eight types of armors, including light, heavy, one and two-handed weapons, bows, wands, and shields. Warriors are sorted by strength, damage, resistance, intelligence, and dexterity. If the player’s squad wins the battle, the player can get attribute points, which are used for improving individual parameters of their warriors.

0xGames has promised to release the detailed roadmap of the project after the presale is completed. Currently, users can buy chests that include three random items like light, heavy or one-handed weapon or bows, wands, and shields.

0xWarriors has partnered with Asia-based companies such as Meet.One, an crypto wallet and block producer,  and TokenPocket, a crypto wallet, to help grow the user base after the game increased in popularity since its’ launch. A presale of the company’s tokens is currently open.

About the game developer

The 0xGames’s team started to work together in November 2017. Their first product was 0xUniverse, a game powered by the Ethereum blockchain, where players can colonize planets in a 3D-rendered galaxy.  After successfully launching 0xUniverse, the company announced new games 0xBattleships and 0xWarriors.