Blockchain intelligence firm Chainalysis has published its latest analysis of the use of cryptocurrencies to purchase child sexual abuse material on the darknet.

New York-based blockchain intelligence firm Chainalysis has published its latest analysis of the use of cryptocurrencies to purchase child sexual abuse material (CSAM) on the darknet.

In a report shared with Cointelegraph on April 22, Chainlaysis noted that it had traced just under $930,000 worth of Bitcoin (BTC) payments to addresses associated with CSAM providers in 2019. This represents a 32% increase over 2018, which had in turn presented a 212% increase over the previous year. 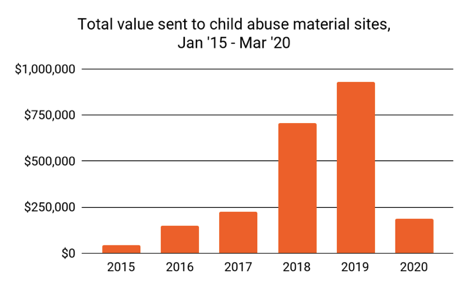 Nonetheless, Chainalysis emphasized that this stark year-on-year rise is not necessarily reflective of an absolute rise in CSAM demand, but is likely to reflect a rise in the level of adoption of cryptocurrencies across all sectors.

How to decode the warning signs

$930,000 in Bitcoin represents “a miniscule fraction of all cryptocurrency activity” — and yet the industry should be concerned about such usage of cryptocurrencies in a criminal and deeply exploitative industry, Chainalysis says.

While cryptocurrencies may have become prevalent among criminal content providers due to their perceived pseudonymous properties, Chainalysis notes that the blockchain can in fact provide investigators with actionable data that sheds light on the profiles and activities of those involved.

Among the key patterns identified in the report are frequent low-value payments — typically between $10 and $50 in Bitcoin — sent between 11pm and 5am. While small payments account for the lion’s share of transactions, CSAM providers do draw a significant percentage of their revenue from much larger individual payments.

Other signs of illicit CSAM activity include cryptocurrency transactions that are tied to prepaid credit and debit cards, or those made repeatedly to one address (or group of addresses controlled by the same entity).

Crypto payments to known escort services or other adult services providers or the purchase of crypto tokens that target the adult industry specifically can provide law enforcement with further data points towards an analysis of the CSAM darknet sector.

As Cointelegraph has reported, listings site Backpage — described as “the world’s largest brothel” —  was seized by the United States Department of Justice in 2018.

CEO Carl Ferrer later pleaded guilty to conspiracy and three counts of money-laundering, in part via cryptocurrencies, admitting he had been aware that the “great majority” of the site’s ads were for prostitution services.

Ferrer had laundered $500 million in revenue through multiple bank accounts and sites that included Coinbase, GoCoin, Paxful and Kraken, among others.