Precious Ledgers: Why Blockchain Is the Right Fit for Gold and Diamonds

Blockchain adoption in the field of precious metals.

Indeed, blockchain has been pioneering both gold and diamond industries — complex ecosystems that heavily rely on supply chains, where cargo passes through dozens of geographical locations before arriving at its destination. The technology has helped to avoid corruption and improve quality by tracking valuable assets at every milestone of their journey, from mine to retailer.

On October 19, the London Bullion Market Association (LBMA), a wholesale over-the-counter market for the trading of gold and silver, announced its plan to modernise and improve transparency in the industry — with the help of blockchain.

The technology could help excluding metal that is “illegally mined or traded or used to finance conflict” from the global supply chain. Indeed, that seems to be an industry-wide problem: for instance, in March 2017, FBI accused three employees of NTR Metals of importing $3.6 billion worth of gold from South American countries, refining, selling it, and then sending the earnings back to “drug traffickers.”

Thus, as per Reuters, in March 2018, the LBMA asked its 144 members, including the world’s largest gold refiners, banks and dealers, for proposals on how to track gold from mines to its final destination and prevent forgery of gold bars.

The association received 26 proposals “from companies ranging from startups to major technology firms” in return, LBMA’s executive board director Sakhila Mirza told Reuters, without mentioning any particular names apart from IBM.  While the association did not insist on using blockchain, “more than 20 of the 26 responses” reportedly embraced the technology in their project drafts.

“We need to set up criteria and standards that help us understand what is a credible blockchain solution [...] Once those have been appropriately established, the result would be a selection of service providers that meet the minimum standards.”

According to the LBMA’s executive board director, a draft of the standards for tracking systems will be discussed in the first half of 2019.

JPMorgan steps in to tokenize gold

On October 29, Financial Review reported that JPMorgan, the most valuable bank by market capitalization in the world, has been using its enterprise version of the Ethereum blockchain that supports the use of smart contracts – called Quorum – to tokenize gold bars.

Quorum was first announced in October 2016 as part of Ethereum Enterprise Alliance (EEA). The US bank presented a blockchain-powered system that aims to "significantly reduce" the number of parties required to verify global payments, cutting transaction times "from weeks to hours." The move came just a month after JPMorgan’s CEO Jamie Dimon famously called Bitcoin “a fraud” that “won’t end well,” a comment he most recently completed by saying he doesn’t “give a sh*t” about the cryptocurrency while adding that “blockchain is real.”

According to the Financial Review, JP Morgan mentioned the idea of “tokenizing” assets at the Sibos conference held in Sydney on October 22-25. JPMorgan's head of blockchain initiatives, Umar Farooq, elaborated on the concept:

"They wrap a gold bar into a tamper-proof case electronically tagged, and they can track the gold bar from the mine to end point – with the use case being, if you know it's a socially responsible mine, someone will be willing to pay a higher spread on that gold versus if you don't know where it comes from. Diamonds is another example.”

“Tokenization” thus implies tagging physical assets, and monitoring them on distributed ledgers such as Quorum, the company’s private blockchain. The concept not only promises extra security granted by blockchain solutions, but could also reduce risks and eliminate middlemen — like brokers and exchanges — from the trading process.

A somewhat similar solution was introduced by the US-based Emergent Technology Holdings in February 2018, when the fintech company announced its “Responsible Gold” supply chain along with “G-coin,” a digital token allegedly backed by “responsibly sourced gold.”

As per the press release, “Responsible Gold” supply chain is a permissioned blockchain that tracks responsibly sourced gold “from mine, to refinery, to vault.” It aims to provide “100 percent assurance on the provenance of gold" by digitally recording each stage of the supply chain with the help from “cryptographic seals” attached to the gold.

In an interview with CNBC, Emergent's chief commercial officer, Mitchell Davis, argued that the company’s approach was "fundamentally different" from others projects, partly because of its focus on "responsibly sourced gold."

“G-coin,” in turn, is reportedly created in conjunction with NYSE-listed Canadian mining company called Yamana Gold. One coin is allegedly equivalent to one gram of “responsibly sourced gold,” and is pegged to the spot price of gold.

The history of blockchain in the diamond industry could be traced back to May 2015, when Australian entrepreneur Leanne Kemp founded Everledger — a global digital registry for diamonds powered by distributed ledger technology (DLT). One of its main goals was to tackle the problem of “blood diamonds” — minerals extracted in war zones and sold to finance oppressive regimes.

An immutable ledger would allow access to the full account of a particular diamond’s history and eliminate the possibility of forging documents, as every milestone of the gem’s destination would be recorded.

In January 2018, De Beers Group, a large international corporation that specializes in diamond exploration, mining, and retail, introduced a similar initiative, although on a larger, commercial scale. The company announced it was looking into blockchain to improve the transparency of the diamond value chain and get permanent digital records for every diamond registered on the platform.

De Beers added that an initial proof of concept trial was successful and resulted in a working prototype. The company’s CEO Bruce Cleaver said in a press release:

“Diamonds hold enduring value and represent some of life’s most meaningful moments, so it’s essential to provide assurance that a diamond is conflict-free and natural. By leveraging blockchain technology, we will provide an additional layer of assurance to consumers and industry participants, with every diamond registered on the platform having a record as everlasting as the diamond itself.”

A week after De Beer’s announcement, Impact, a Canadian NGO, left the Kimberley Process initiative (the process established in 2000 to prevent "blood diamonds" from entering the mainstream diamond market), arguing that the global agreement has not lived up to its goals. The move highlighted the urgency of the problem within the industry.

On May 10, De Beers claimed that it tracked 100 high-value diamonds from the mine to the retailer using blockchain. According to the press release, this was the “first time a diamond’s journey has been digitally tracked from mine to retail.”

Tracr assigns a unique “Global Diamond ID” which records individual diamond characteristics such as carat, clarity, and color. The data is then recorded onto an immutable digital ledger. After that, Tracr verifies the data at each milestone of the diamond’s destination.

The company’s move attempted to improve consumer confidence and public trust that their diamonds were non-conflict, in addition to increasing efficiency in the supply chain, as it was designed to complement existing regulations and schemes within the industry: the Kimberley Process Certification Scheme, World Diamond Council System of Warranties, and Responsible Jewellery Council Code of Practices.

CEO of De Beers Group Bruce Cleaver stressed the importance of the initiative for the industry:

“The Tracr project team has demonstrated that it can successfully track a diamond through the value chain, providing asset-traceability assurance in a way that was not possible before. This is a significant breakthrough made achievable by the close engagement of the pilot participants who share our commitment to industry progress and innovation.”

On October 29, major Russian diamond mining firm Alrosa joined the Tracr project, further escalating its potential for the industry. Alrosa is reported to be the world’s largest producer of raw diamonds in carat terms; together with De Beers, the two firms produce around half of the world’s supply.

As Alrosa CEO Sergey Ivanov told Mining Weekly, the company’s move was motivated by a belief that industry collaboration is essential for the sake of “a common goal.”

In late April, a consortium of jewelry industry leaders announced TrustChain initiative in collaboration with with IBM, who developed a blockchain network for tracing the origin of finished pieces of jewelry.

Based on the IBM Blockchain Platform and the Hyperledger Project, the initiative is designed to track and authenticate diamonds and precious metals from their place of origin to their retail location. It provides “digital verification, physical product and process verification, and third-party oversight,” aiming to assure customers that their jewelry purchases are ethically sourced.

By applying the technology, the consortium of the companies intends to digitize processes, establish a shared, immutable record of transactions within the network, and enable access to trusted data in real time. Mark Hanna, Richline Group’s Chief Marketing Officer, commented on the initiative:

“TrustChain is the first blockchain of its kind within our industry, designed as a solution that marries IBM’s leading blockchain technology with responsible sourcing, verification and governance by third party organizations, led by UL as the administrator.”

According to the announcement, the product will be available to consumers by the end of 2018.

Diamonds are being tokenized, too

In May 2018, blockchain startup D1 Mint Limited, the creator of the diamond-backed crypto asset D1 Coin, announced it was working with two leading diamond industry players to tokenize gems.

D1 employs a pricing algorithm to establish the price at which crypto investors can redeem their tokens for selected diamonds from their diamond reserve at any given time, using the technology to translate traditional industry parameters of value — namely diamond’s shape, carat, cut and clarity. 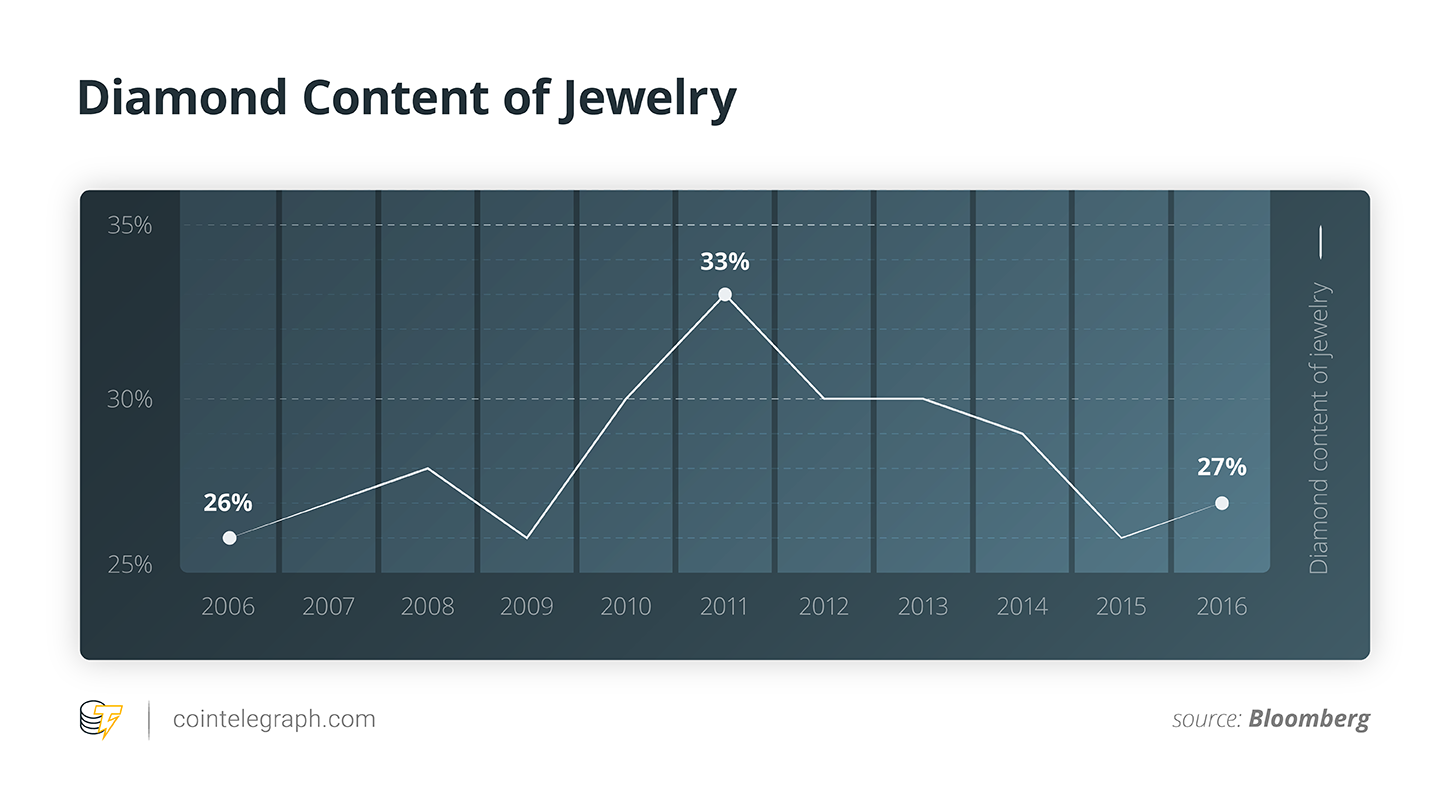 While the diamond industry has seen stagnating demand among retailers, with spending on diamond jewelry staying flat at around $80 billion a year since 2014, as per a De Beers study, Alexei Chekunkov, a member of Alrosa’s Board of Directors, stays optimistic — his company believes that the innovation of blockchain can transform the precious gem industry by making natural diamonds an investment asset class with wider appeal across “various investor groups, driving higher demand.”