The XRP Markets Report for Q1 2020 shows the On-Demand Liquidity network is more popular than ever, while Ripple’s XRP sales have hit a new low.

The dollar value transacted using ODL increased by more than 294%, which is good news for token holders with the report describing XRP liquidity as the “lifeblood of Ripple’s [ODL] for cross-border payments.”

In further good news, Ripple has again reduced its total XRP sales from $13.08 million in Q4 2019 to $1.75 million in Q1 2020. The company had been criticised for propping up its balance sheet with XRP sales. The report also notes the token was integrated into “a number of additional exchanges and liquidity instruments.”

The report attributes part of the increase in ODL to cost-saving measures implemented by the network which eliminate the need to pre-fund international accounts. It highlights the partnership between Ripple and UK-based digital money transfer service Azimo as an example:

Correlation with other coins approached 100%

After looking as if it may pull away from a correlation with other major tokens like Bitcoin (BTC), Ethereum (ETH), and Bitcoin SV (BSV), XRP spiked towards a 100% correlation following the major crypto downturn in March. 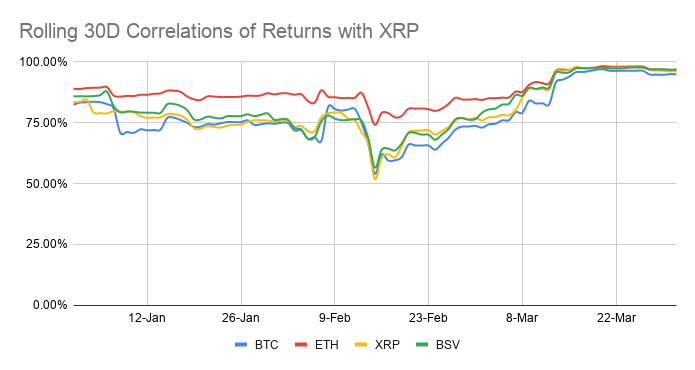 Those monitoring XRP whale activity may have noticed Ripple releases one billion coins every month, usually half at the first of the month:

The report notes that across Q1 2020, 3 billion XRP tokens were released out of escrow. However, 2.7 billion of these were “returned and subsequently put into new escrow contracts”.