The price of Bitcoin (BTC) could rise to as high as $12,000 within the next month, some traders say. Predictions for an extended uptrend emerged as the dominant cryptocurrency steadied amid declining volatility for about five days.

Historically, Bitcoin tends to see large price movements following a long period of stability. For over 100 hours, the price of Bitcoin remained in a 2% range, which is an abnormally low level of volatility for BTC.

Why are analysts saying $12,000 is possible, and why is Bitcoin set to see high volatility?

Since late 2019, the price of Bitcoin has moved within a cycle determined by its all-time high in 2017 and local peak in June 2019. Every attempt to break out of the cycle in the past 10 months led to a steep sell-off in the cryptocurrency market. 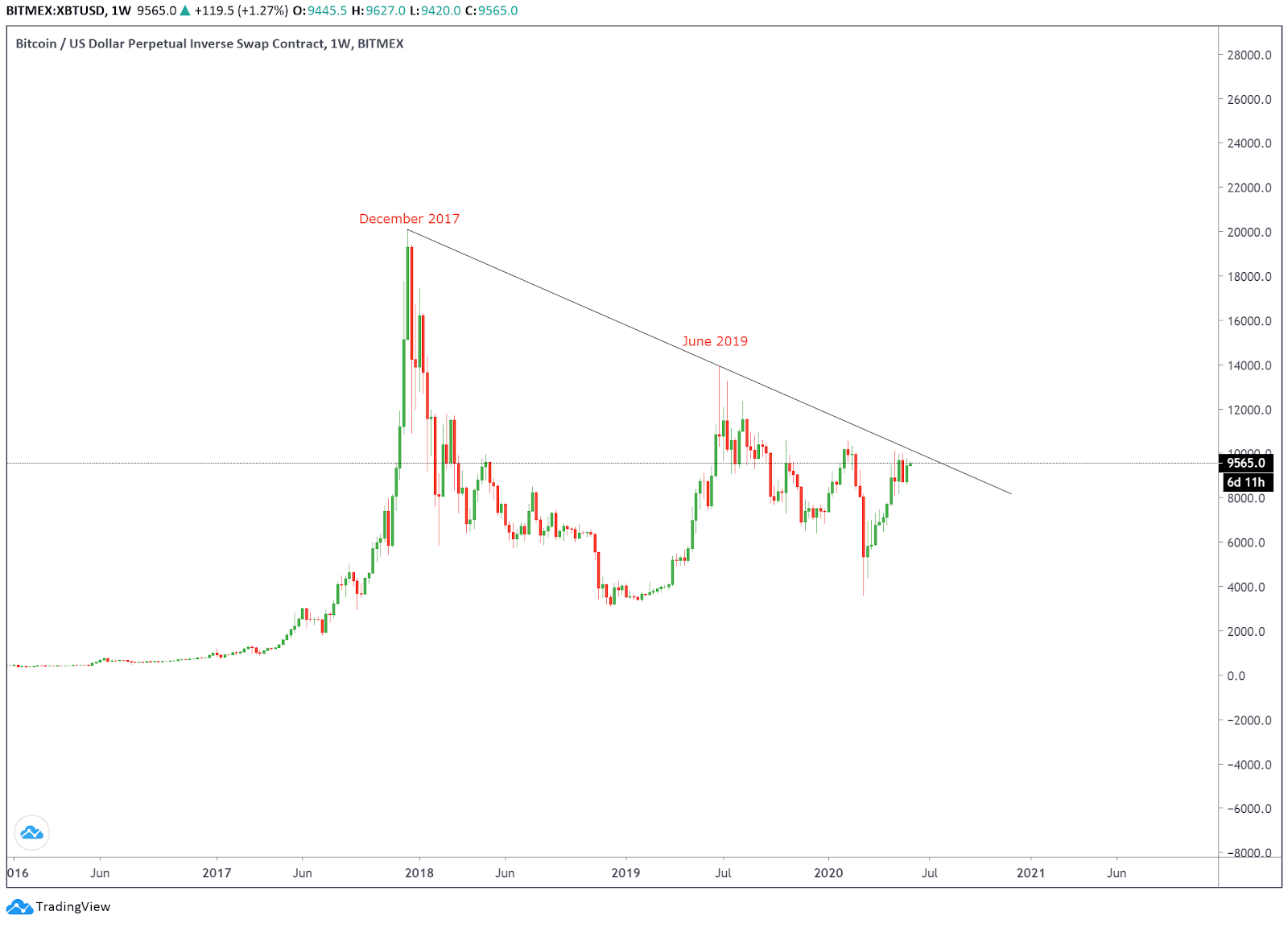 Bitcoin failed to break out of its multiyear cycle in the last three attempts. Source: TradingView

The question technical analysts are asking is whether Bitcoin is ready to break out of the dreaded cycle this time around, starting a new bullish trend.

The most compelling case for a breakout above $10,500 in the near term, which would kick-start a new bull market, is the ongoing consolidation of BTC at $9,500.

The term "consolidation" in trading refers to the price of an asset declining slowly as traders approach the market with caution. Continued consolidation just below a key level such as $10,000 for a relatively long period of time indicates the probability of a breakout is increasing.

A trader known as Benjamin Blunts who predicted the $3,150 bottom of Bitcoin in 2018 said:

“When BTC finally does break out of this range it's going to be explosive, I’d say $11k within 3 weeks and possibly $12k within a month.” 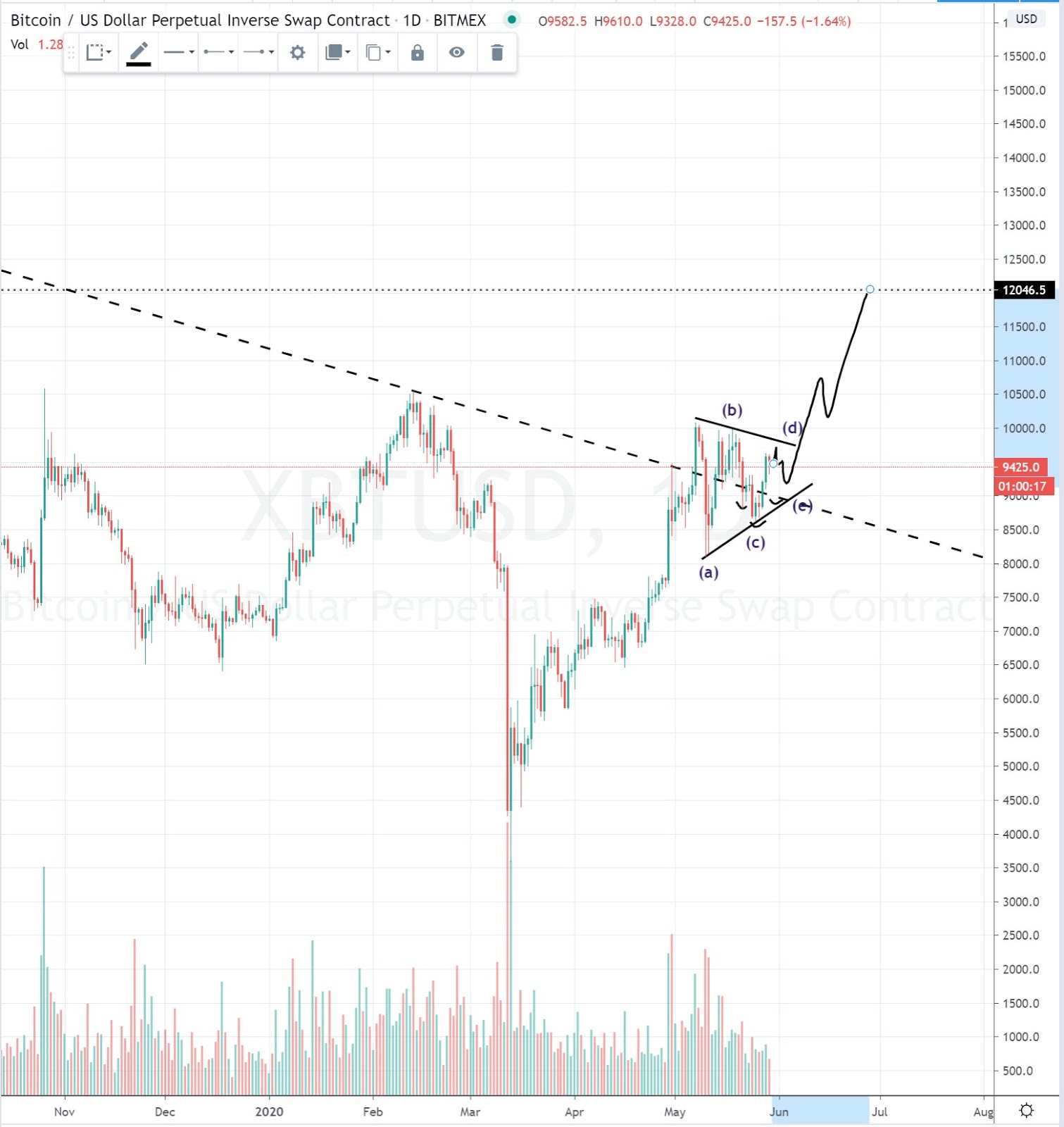 A bullish scenario for Bitcoin in the short-term. Source: Benjamin Blunts

Prominent Bitcoin options trader Theta Seek raised a similar point. Looking at a different data set, the trader suggested that BTC is unlikely to stay in the $9,000s for a long time:

“Been seeing alot of bearish tweets, but I think that this is the last 1-2 weeks that you'll ever be able to buy BTC under $9k.”

What is the bearish alternative scenario?

Most short-term bullish projections of Bitcoin revolve around the assumption that Bitcoin surges above $10,500 and breaks out of its existing trend.

If it fails to see a price spike above the $10,000–$10,500 range, Theta Seek said the alternative is a 20% fall following a cascade of liquidations in the options and futures market. The trader noted:

“The logical conclusion is that one of the 2 is going to happen. i) We moon and these guys take out more loans to pump the price further up ii) Or we crash >20%, causing 80% LTV loans to get liquidated and cascading liquidations causing $10 billion of BTC to be dumped on us.”

The price of Bitcoin is at a pivotal point, and its price movement over the next seven days is likely to determine its trend throughout the third quarter of 2020.