Lagos has an interest in crypto, but adoption is slow, with many only considering Bitcoin as an alternative means of receiving foreign payments.

Data from Google Trends shows that Lagos, Nigeria ranks as the number one city based on the volume of online searches for Bitcoin (BTC). While this data may indicate a high level of interest among the city's approximately 21 million people, it has yet to equate to tangible adoption of the emerging trend of technology.

But that is changing, as a growing movement among young people frustrated with existing payment systems looks for alternatives.

Bitcoin as a dollar substitute

For the most part, “Lagosians” who are aware of the existence of Bitcoin see the top-ranked cryptocurrency as a substitute for the United States dollar. BTC exists for them on a spectrum that lends itself as a viable substitute for foreign currency.

Payment companies like PayPal do not allow Nigerians to receive money transfers from abroad, thanks to the notoriety of internet fraudsters in the country — and the companies that offer such services usually charge high fees.

Thus, it is common to see the city's growing freelancing community beginning to pivot toward cryptocurrency payments. Many of the youth in the city, having battled with underemployment or unemployment, have sought to try their hands outside the traditional working environment.

The National Bureau of Statistics (NBS) reports that Nigeria's unemployment rate rose to above 23 percent in 2018. In a city like Lagos, many young university graduates can be seen making a living as freelancers, offering services from copywriting to website design and even computer programming. 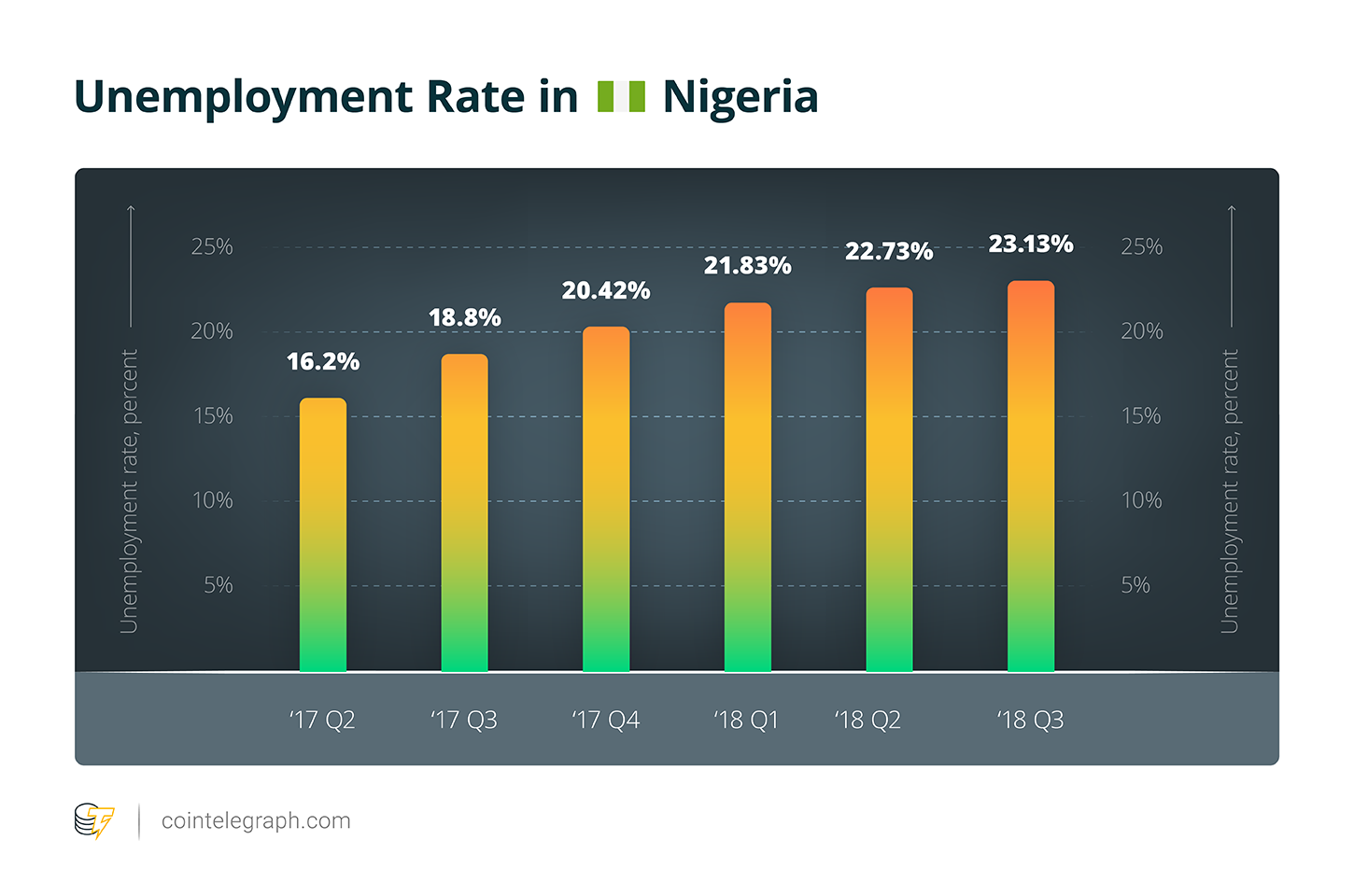 Given that many of their clients are based abroad, there can be issues with receiving payment for the work done. However, with a BTC wallet and a plethora of local exchange services, these freelancers can receive payments easily from clients spread across the globe.

Apart from freelancers, business owners are also using Bitcoin, as well as other crypto-focused platforms, as substitutes for foreign currency and banks. Companies like BitPesa offer easy access to liquidity, which can be a hassle to businesses in frontier markets like Lagos, especially in the context of foreign trade.

“I see crypto taking up a strong position in the remittances space. It’s often cheaper, less stressful (in terms of documentation) and faster to send and receive crypto. Many younger folks in the diaspora are now leveraging crypto to send money back home. Some techies working remotely are also getting paid in crypto.”

In 2001, the government at the time introduced mobile telecommunications technology to the country. In the 18 years since that landmark event, mobile telecoms have become a significant sector in the nation's economy, contributing 10.5 percent of its gross domestic product as of mid-2018.

Nigeria has over 100 million active internet subscriptions, mostly on mobile platforms. Bitcoin as a payment technology leverages on this access to the web, allowing tech-savvy Nigerians to participate in the growing cryptocurrency trend.

While the peer-to-peer (p2p) trading aspect of the emerging BTC narrative continues to take shape in Lagos, there is a massive underutilization of the technology itself. Even with the potentially paradigm-shifting aura attached to cryptocurrency, Lagos — and, by extension, Nigerians — seem content to focus only on BTC as a dollar substitute without diving deeper into the technological ramifications of broader Bitcoin adoption.

Data from Bitnodes, which tracks the global Bitcoin nodes distribution, shows that there are virtually no nodes in the country. Yes, Lagos leads the way in online BTC searches. But only a handful of people run actual Bitcoin nodes.

This reticence for a broad-based adoption isn't entirely down to apathy toward the technology itself, but is, instead, a representation of the lack of proper infrastructure on which to support a vibrant digital economy. In a city that lacks constant electricity supply, the fact that people aren't running Bitcoin nodes hardly comes as a surprise.

“There’s still a whole of lot education that needs to go into helping people understand the relationships between Bitcoin (crypto) and its underlying Blockchain technology. However, the Nigerian market is likely to focus on crypto to the exclusion of other applications of Blockchain inasmuch for as long as there’s profit to be made in the speculative side of cryptocurrency.”

Another startling indicator of Bitcoin underutilization in the city comes from the lack of retail acceptance of the cryptocurrency. While metropolitan areas in the United States, Europe and parts of Asia have increasingly seen more retail adoption of BTC as a payment means, Lagos rarely registers on the map, as indicated by Coinmap.

“In my opinion, Bitcoin (and cryptocurrency in general) is still seen as a speculative play to make quick gains. You can see people trading huge sums of Bitcoin on platforms such as Remitano but you’ll be hard pressed to find a business that accepts crypto as payment for products or services.”

At the time of writing this article, Coinmap reports that there are more than 14,600 venues that accept Bitcoin payments across the globe. Only South Africa registers any significant BTC adoption in the retail scene as far as Africa is concerned.

Once again, Nigeria risks falling behind the rest of the world in the race to embrace the emerging digital landscape. While other megacities obtain first-mover advantages in being at the forefront of the emerging digital revolution, either by ignorance or the absence of requisite basic infrastructure, Lagos continues only to associate with the basic aspects of BTC adoption.

Bitcoin and the allure of get-rich-quick schemes

Over the last decade-and-a-half, Nigeria has gained notoriety for being home to internet fraud. While this image continues to be inimical to the aspirations of honest and hardworking Nigerians, it has also contributed to many people casting a jaundiced glance in the direction of Bitcoin and cryptocurrencies in general.

This situation hasn't been aided by the fact that BTC began to come into public consciousness after the debacle of the Russian Mavrodi Mondial Moneybox (MMM) scam. For the most part of 2016 and 2017, many characterized BTC as the "new MMM."

In a private chat with Cointelegraph, Joseph Samuel, a blockchain analyst, web designer, and team leader at “Humane Love,” a Lagos-based charity project on the EOS blockchain spoke about how some Lagosians tend to conflate and confuse Bitcoin and MMM, saying:

“Many Nigerians got to know about Bitcoin during the MMM Ponzi scam. As a result, they tend to see Bitcoin as another fraudulent investment scheme. However, with proper education, this misinformation can become a thing of the past.”

In so doing, they missed out on the massive profits gained by early adopters during the late 2017 bull rally. With BTC almost eclipsing the $20,000 mark in late 2017, having begun the year trading below $1,000, the usual opportunists came out of hiding to evince designs of fraudulent schemes centered around Bitcoin.

For Samuel, the city still has time to catch up to the rest of the world, declaring:

“Lagos is a mega city filled with some of the smartest people in the world. Unfortunately, the fear of the unknown prevents many from adopting newer technological breakthroughs. Once they become more amenable to change and realize what Bitcoin represents, Lagos will become a major hub in the developing digital economy.”

Organizations like the Cryptography Development Initiative of Nigeria (CDIN) and the Nigerian Blockchain Alliance (NBA) have been at the forefront of combating cryptocurrency scams in Lagos and other parts of the country. Together, these institutions collaborate with agencies like the Nigeria Electronic Fraud Forum (NeFF) to prevent the proliferation of Bitcoin-related criminal activity.

Bitcoin and the 2016 recession

Historical charts from Coin Dance shows a massive increase from 2016 in Bitcoin trading volume on Localbitcoins — a p2p BTC trading platform. This marked increase was no coincidence, as 2016 saw the country's economy go into its worst recession since 1987.

Around that time, many local digital payment companies in the city also began to pivot to Bitcoin. New businesses also sprang up, offering avenues to purchase the cryptocurrency. Cointelegraph spoke with Adekemi Bitire, a marketing executive at IBIC Exchange, an over-the-counter (OTC) Bitcoin exchange in the Yaba area of Lagos, about the BTC adoption trend in the city. Bitire explained:

"Over the course of my involvement in the Bitcoin OTC scene here in Lagos, I have observed an exponential increase in the number of people adopting BTC trading. More people are getting into the business, earning steady commissions, and improving their standard of living."

Bitire elaborated on the expanding demographic of BTC adoption in the city:

"Apart from university students and out-of-college freelancers, we are also seeing mid-level employees of companies in the city using Bitcoin as a way of creating another revenue stream to augment their monthly salaries."

Bitcoin as an avenue of escaping weaponized poverty

The present-day reality in Nigeria is one many believe is firmly entrenched in the weaponization of ignorance and poverty for the sole purpose of disenfranchising the majority. The ruling oligarchy, while enjoying the commonwealth of the people, propagates a message of "living within one's means," a euphemism, some say, for the glorification of poverty that simultaneously casts aspersions on the desire to achieve economic and financial emancipation.

Within that alleged construct of this tyrannical state-sponsored weaponization of poverty lies a veritable tipping point for greater Bitcoin adoption in Lagos and other places in Nigeria. The core principle of BTC lies in libertarian ideals that are at odds with the socialist politics of mass economic disenfranchisement.

Data from the Central Bank of Nigeria (CBN) shows that about 31 million of the country's population own bank accounts. Figures from the Independent National Electoral Commission (INEC) show 83 million registered voters. The fact that the total addressable market for business in Nigeria is 63 percent less than the total number of eligible voters paints an alarming picture.

Bitcoin is a multi-billion-dollar market that encompasses more than a cross-border payment system. It represents the ability to build a decentralized global market infrastructure free from censorship. Thus, there exist a myriad opportunities for greater BTC adoption in a mega city like Lagos.

With such a high percentage of unbanked and underbanked people, especially in rural areas, increased BTC adoption presents a viable alternative to traditional banking services. Places in Southeast Asia that suffer from the same problem are already showing a considerable increase in cryptocurrency adoption.

Greater emphasis on creating more user-friendly methods of making BTC payments could see the technology spread to rural areas where the people might not be as tech-savvy as their urban counterparts. The bulk of unbanked and underbanked people live in these impoverished, rural settlements, as it is in most other places in the world.

Increased BTC adoption can help to create an expanded set of "means" within which ambitious and upwardly mobile people who pursue legitimate livelihoods can improve their standard of living. This outcome will, however, remain unattainable if the allure of BTC remains firmly rooted in the realms of being a "side hustle."

Victor Alagbe of OneWattSolar encapsulates the need for a more broad-based approach to Bitcoin and blockchain technology in Lagos, Nigeria, and Africa as a whole, declaring:

“I think the fact that the Nigerian market is interested in crypto is good for the eventual mainstream adoption of Blockchain technology. Blockchain introduces trust in inherently trustless environments such as ours; hence, when Blockchain-powered projects (DApps) that are not overly bundled with crypto hits the mass-market, they’ll probably be quick to gain traction.”

There are far larger social and economic implications at play than Bitcoin as a dollar substitute. By creating useful technological and financial products and services centered on Bitcoin, the top-ranked cryptocurrency could potentially create far greater utility for Lagos — and Nigeria as a whole.