Even emerging stock markets like Zimbabwe or Argentina grew much slower than Bitcoin or Ethereum not to mention Ripple. Best month for most cryptocurrencies was December.

When looking across the globe, there were plenty of strong performing equity markets in 2017. Nevertheless, none compare to the massive appreciation seen within the cryptocurrency sector.

Warning: If you are primarily an equity investor, you may soon be compelled to enter the world of cryptocurrencies as the relative outperformance of the top cryptocurrencies in 2017, when compared to equity markets, was astronomical.

As you can see in the following table, Top Stock Market Performance 2017, relatively high returns came from less developed and emerging stock markets such as Argentina with a 77.7 percent return, Mongolia which rose by 68.9 percent, and Kazakhstan, climbing by 59.3 percent. Of course, for most investors, there are barriers to accessing these stock markets. That may be one of the reason’s global investors have taken a liking to cryptocurrencies as they are global, can be accessed and traded 24 hours a day, seven days a week. In major developed stock markets, Hong Kong’s Hang Seng Index led the way with a 36 percent return, followed by India’s BSE Sensex 30, up 27.9 percent. The Hang Seng ended December at 29,919.15, close to the high for the year, and the second highest monthly closing price ever, second only to the record high peak from November 2007 of 31,958.41.

Since 2009 low the Hang Seng has been progressing higher in an ascending parallel trend channel. The index is now heading towards the top channel line, which will put it in the area to test resistance around the 2007 highs. That’s only 6 percent or so higher. It’s interesting to note that the Hang Seng has only had one down month during 2017, a testament to its strength. India’s BSE Sensex 30 Index ended the year almost 10 percentage points lower than the Hang Seng, but a strong finish nonetheless. The Sensex had a solid close at a record high of 34,057, very close to the year’s high of 34,127.22. December triggered a monthly bullish trend continuation signal and follows a breakout of a two-year base in May. This is very healthy price behavior and supportive of a continuation of the bullish trend. As long as the Sensex continues to progress with a series of high monthly highs and higher monthly lows, further upside is likely. 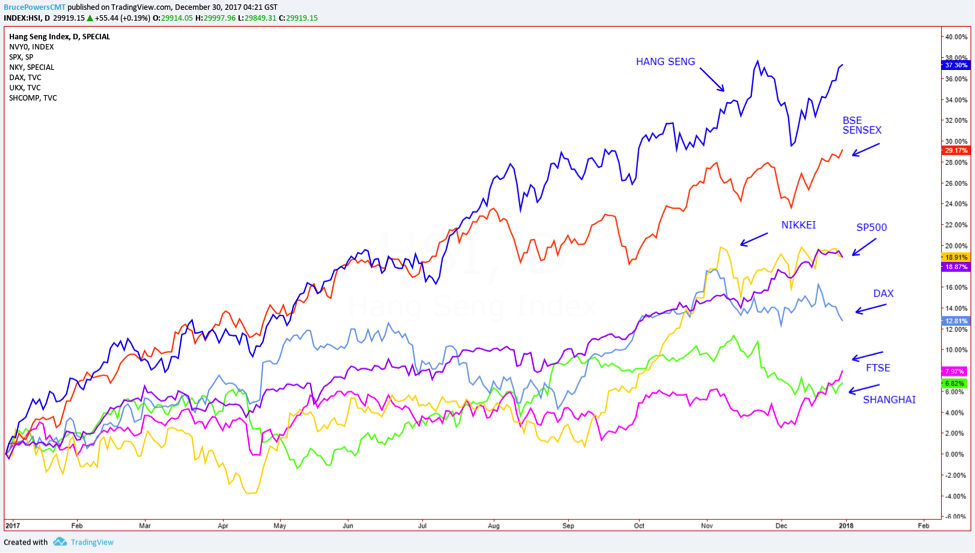 The third best performing major stock market index last year was the S&P 500 (SPX), up 19.4 percent to end at 2,674. For the past 13 months the SPX has advanced as much as 29.3 percent, as of the year’s 2,694.97 high, in a sequential series of higher monthly highs and higher monthly lows, all in the face of growing choir of bears, waiting and ready to bounce. This monthly pattern continues to define a strong uptrend.

In addition to ending the year technically strong, in the upper third of December’s high-to-low price range, the close was at a new monthly closing high. When measuring the current advance from the February 2016 swing low, the SPX was up as much as 48 percent as of the recent high.

Can it keep going? Well, the prior rally (swing low to swing high) on a monthly basis, starting from October 2011, saw the SPX increase as much as 99 percent before moving into a prolonged consolidation base period. So far the advance is approximately half of that. By itself, this would indicate more upside potential.

Of course, not all stock markets were bullish last year, but the worst performers were relatively smaller exchanges. The bottom performing market for 2017 was the Sarajevo Stock Exchange. It ended the year down 18.5 percent to close at 562. Coming in second was the Qatar Exchange Index, with a loss of 18.3 percent, followed by the Karachi Stock Exchange Index, which dropped by 15.3 percent. Qatar, of course, has been negatively impacted by an economic blockade since June spearheaded by Saudi Arabia with support from other Arabian Gulf countries.

This next chart shows the performance of the five of the larger cryptocurrencies including Bitcoin (BTC/USD). The cryptocurrencies shown in this chart and the accompanying table further down, is not comprehensive and is chosen as a sample of the more popular and widely traded cryptocurrencies.

It is interesting to see that the cryptocurrencies shown all started to accelerate higher around early-November, except for Ripple (XRP/USD). Ripple was late to the party but doesn’t seem to be losing any time making up for the slow start. You can see how it has been rising rapidly recently while the other major cryptos start to pullback. For the month of December Ripple has advanced more than 700 percent. The Ripple token is used to facilitate global payments by banks and other financial institutions. 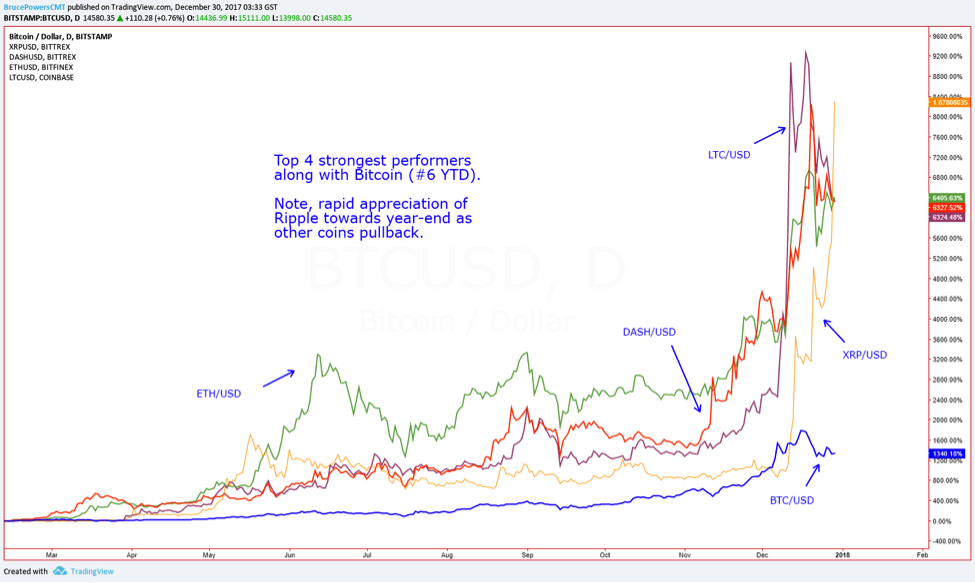 Following the strong performance of Ripple is Dash (DASH/USD). Dash was up at least 9,400 percent for 2017 through Dec. 31. Dash broke out of a 32-month base into new high territory in February and has barely looked back. Over the past 10 months, since the breakout, Dash as advanced as much as 10,584 percent, as of its recent high of $1,595.76 reached in December. So far, since reaching that high, Dash has moved into a pullback, falling as much as 51 percent before bouncing.

Ethereum (ETH/USD) was the third-best performer for the year, up at about 9,000 percent to $757 at Dec 31. It started 2017 very strong, rising over 5,000 percent in the first five months before moving into a four-month or so consolidation phase. A classic symmetrical triangle consolidation pattern formed subsequent to the top. Ethereum broke out of that pattern with conviction in November, rising a little over 100 percent before confronting resistance at $863.0 last decade of December and sliding into a retracement. To date, the retracement has seen as much as a 40 percent loss in value from the high. 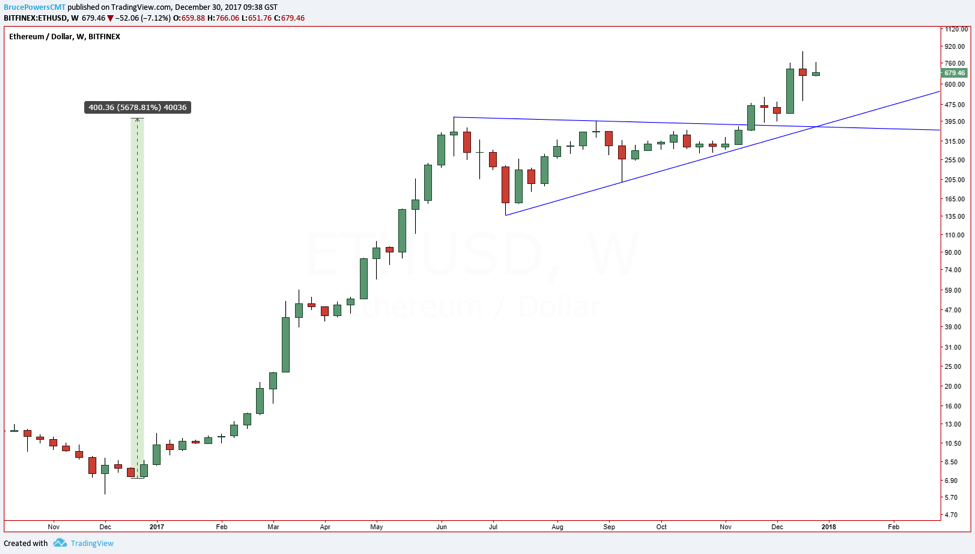 In fourth place comes Litecoin (LTC/USD), with a 5,582 percent advance of the year so far. Litecoin has been pulling back over the past couple of weeks, since hitting resistance at a record high of $420.0. That high completed a 735.8 percent increase in only six weeks, starting at the low of a three-week pullback at the beginning of November. The move was accompanied by increasing volume until the top, which is where weekly volume reached a record high. 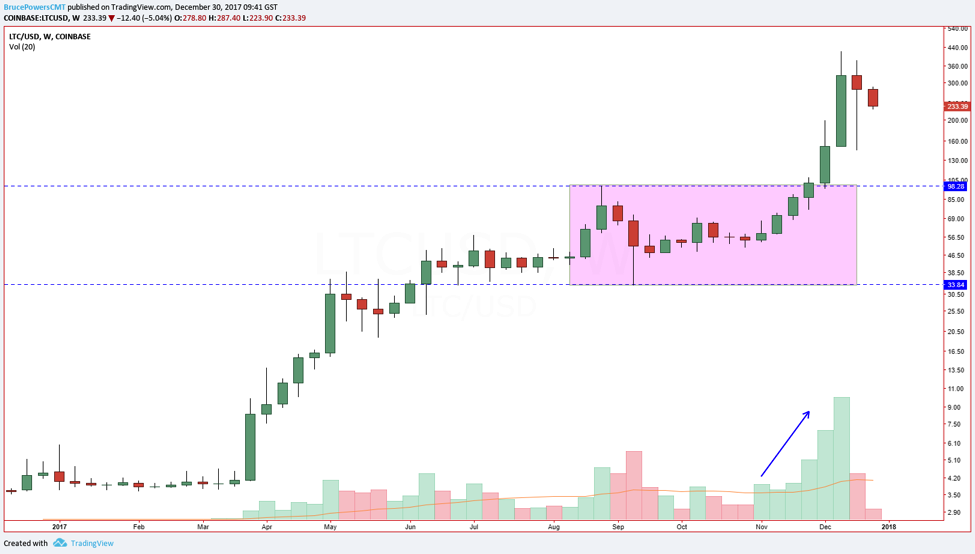 Let’s now jump to Bitcoin, which comes in sixth place for the year out of the cryptocurrencies selected. Of course, Bitcoin has been the one getting much of the attention in the sector since the summer. It is up 1,390 percent year-to-date and was up as much as 1,935 percent at the record high of $19,666 hit mid-December. Interestingly, the second highest volume week of the past two years was seen in the next week following that record high. That was a down week.

Bitcoin had been advancing in a nicely formed parallel trend channel since the first quarter of the year until later in November. At that point, Bitcoin broke out through the top trend line of the channel and began to accelerate higher. This can be seen in the increase in the angle of ascent of price in the following chart. 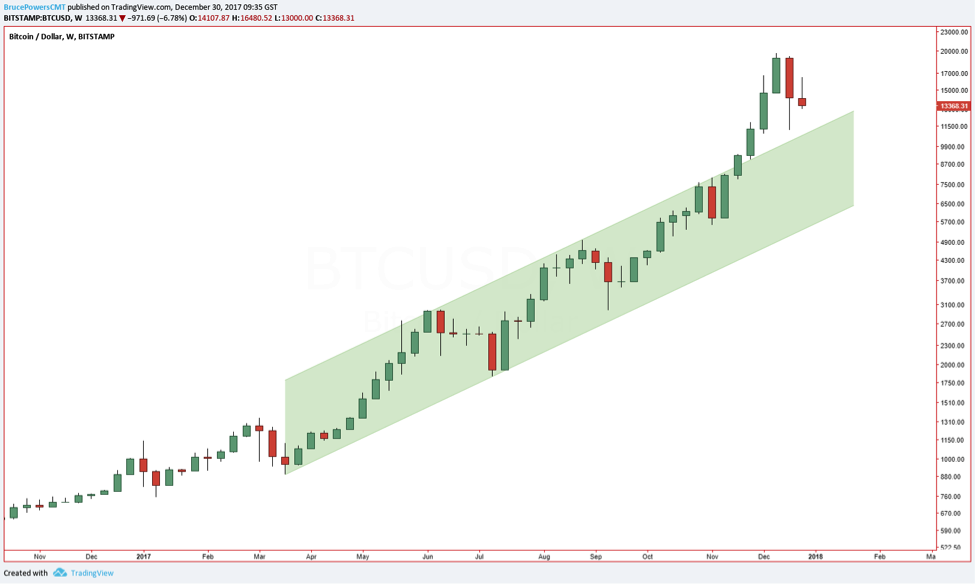 Going back one to fifth place is Monero (XMR/USD). Monero is up 2,481 percent. It ended 2016 at $5.90 and jumped to at least $348.02 over the subsequent 12 months. This coin has been a steady progression higher throughout the year and recently hit a record high of $477 before pulling back. It remains in a clear uptrend. 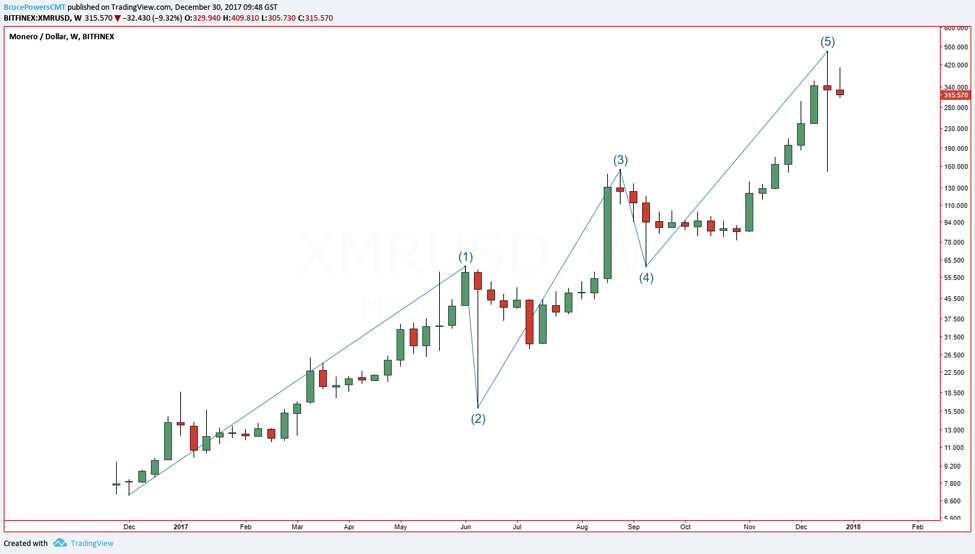 IOTA (IOT/USD) takes seventh place with an advance of 1,356 percent since June, when it was launched. The high for 2017 was two weeks ago at $5.80. At the point, IOTA was up over 1,700 percent in just seven weeks. It subsequently declined as much as 80 percent off the high. 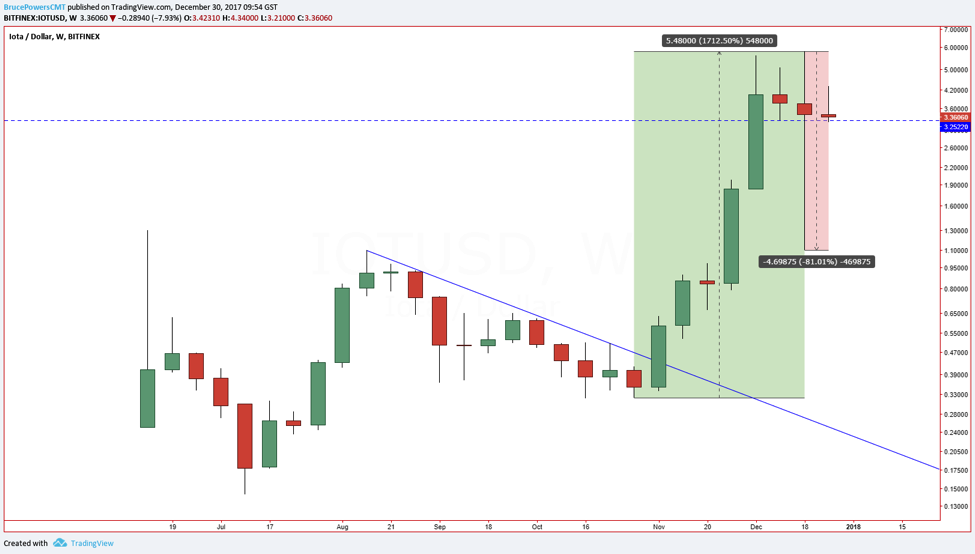