Adam Back talks about the details of Bitcoin's early days, his first emails with Satoshi Nakamoto and others about Bitcoin, and more.

Eleven years after Bitcoin's release, Cointelegraph caught up with Adam Back to discuss the early years of Bitcoin, his emails with Satoshi Nakamoto, privacy and much more.

The Blockstream CEO, who spoke to Cointelegraph at the Latin American crypto event LaBitconf in Uruguay, is a developer and cryptographer known for inventing Hashcash, a predecessor of the proof-of-work system used by Bitcoin.

Back also dismissed the idea that he is the father of Bitcoin and said he didn’t help Satoshi create the world’s first cryptocurrency, despite confirming he was probably the first person Satoshi talked to about Bitcoin when he sent an email to Back introducing his idea.

“There were many other things that paved the way for Bitcoin, like digital money experiments driven by cypherpunk ideals. In the 1990s, when the movement really started, I was in Europe, so I only attended one of these San Francisco Bay area in-person cypherpunk meetings.

“However, the cypherpunks not only discussed e-cash but many other privacy-related topics. At that time, there was not only The Cryptography Mailing list — where Nakamoto first published — but many other lists where Nick Szabo, Wei Dai, Hal Finney and others frequently talked about e-cash. Some were physically in the Bay Area — I think Szabo, for example, may have attended the cypherpunks’ face-to-face meetings in the Bay Area along with Cypherpunks mailing list co-founders Eric Hughes, John Gimore and the late Timothy May.

“Back in 1981, David Chaum had already created the foundation for anonymous communication, and in 1983, he launched blind signature schemes. Privacy, anonymity, individual freedom and digital control were hot topics for cypherpunks, along with math and programming.”

“Digital money was also a hot topic, and it was discussed on the Cypherpunks list and other lists like Coderpunks, Cryptography and Bluesky.”

Adam Back was one of the most active posters on the Cypherpunks list, with over 700 published posts.

“There was a lot of debate about creating digital money. Besides Chaum's most famous DigiCash, B-Money (developed by Wei) and Bit-Gold (developed by Szabo), there are many other obscure papers on the subject, and I sent Satoshi references to a couple of them related to proof-of-work in 2008.

“At that time, in 1998, Wei and Szabo were already discussing their ideas about digital money and sharing their proposals on B-Money and Bit-Gold among themselves and other participants on these lists.

“There was also my 1997 contribution of Hashcash as well as many later proof-of-work articles — dozens of them after Hashcash and before Bitcoin, and a few others after Bitcoin launched. I mentioned a few in my 2002 paper about Hashcash and some earlier proof-of-work papers like Cynthia Dwork and Moni Naor’s and even earlier related papers. We can’t forget that there was also Hal Finney's reusable proofs-of-work, or RPoW, that predates Bitcoin from 2004.

“There were also anonymous people looking to create virtual money like MagicMoney from Product Cipher and other privacy tools like Heinry Hastur's ‘pgp stealth,’ which I later took over maintenance of.

“So, if he was on the Cypherpunks list, Satoshi wouldn’t be the only ‘anonymous’ on these lists nor even the only one trying to launch a paper about virtual money. There were many anonymous and pseudonymous people discussing topics on the Cypherpunk lists, including the e-cash topic.

“Myself, Finney and Peter Todd, who was only 15 back then in 2001, were discussing Hashcash and digital money also on the Bluesky list, with Todd also interested in creating decentralized digital money.”

“Decentralized. This is perhaps the main word about Bitcoin arising from the proposals that came before it.

“Chaum had launched the first version of a 'digital money' back in 1989. And some of us on the Cypherpunk lists tried to bootstrap value into Chaum's DigiCash demo server, where it was possible to get coins by email and was promised not to issue more than 1 million units of it.

“On the demo server, I even sold some t-shirts (exported RSA t-shirts) and all of us who were using the DigiCash demo thought that if enough people did that it could start up with a stable value as long as it was just 1 million coins.

“Unfortunately, DigiCash went bankrupt during this experiment, and the double-spend centralized database was also a problem — because if you had coins, it was impossible to prove to anyone if they were spent after they were gone.

“The lesson learned from DigiCash was that we needed a decentralized, peer-to-peer approach, and that was part of the discussion about Hashcash, B-Money, Bit-Gold, RPoW, and other bootstrapping ideas.

“You had to create digital money in a decentralized way, without a bank interface, without permission or partnership with a bank.”

“This is why the concept of Hashcash and mining was attractive — as some people could mine it to create coins, and others could buy and sell them in the decentralized secondary market because there was no centralized database nor bank partnership needed.

“There were also gaps in B-Money and Bit-Gold, so they were not fully complete projects or had players and human markets fulfilling functions that Bitcoin is able to automate within the protocol.

“Hashcash was widely reported at the time in computer magazines and online publications because spam was an increasingly hot topic and there was a hassle with the arms race for which some IT people and IETF groups were trying to find solutions.

“So, Satoshi could have learned about Hashcash without ever debating anything in the cypherpunk groups.”

“In August (or July) 2008, I received an email from Satoshi Nakamoto with an e-cash white paper (there was no name ‘Bitcoin’ yet) and it seemed interesting.

“The questions at that time were: Will he start this? What are the principles? I suggested Satoshi should look into B-Money, which he didn’t seem to know about at that time, and this is how I think B-Money was added to the paper.

“There were a few more emails, and I also sent Satoshi Ron Rivest's 1996 paper on MicroMint, which extracts k-way hash collisions instead of partial pre-images used by Bitcoin. It is a bit centralized, but interesting.

Probably not so many people were aware of the MicroMint paper and even less so the B-Money write-up digital currency proposal. Although I was aware of Szabo's work, I happened to not send him a reference to Bit-Gold.”

“I didn't help to create Bitcoin, I didn't program anything nor participate in any programming task. Around the time the software came out, Satoshi sent it to me, but I didn't help him with that.

“Hal Finney could have reviewed the early Bitcoin code. I have never met Hal in person, but I really liked his inventiveness and enjoyed discussing topics on the cypherpunks list or in email with him. If ‘cypherpunks write code,’ Hal was a code writer, for sure.

“There has been some speculation about who may have helped Satoshi review the Bitcoin code prior to release because of the email that he sent to the list in November 2008. But it seems that Satoshi programmed Bitcoin first before writing the paper and probably he, himself, made several revisions to the code, and later others — like Hal, for example — may have helped review comments or bug reports or doing small bug fixes, just as when you write text and ask someone to review the grammar.” 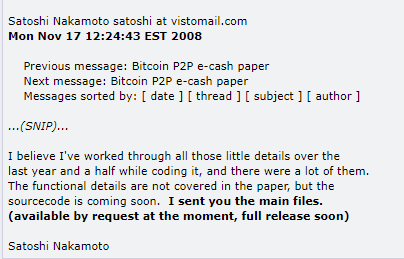 “Unlike Hal Finney and others, although Satoshi sent me the software before the official release, I didn't start running it at the very beginning. Shortly after its release, Hal tried using Bitcoin and wrote a summary of how it worked on the mailing list, and after that I went back to analyzing Bitcoin.

“It seemed to me that Bitcoin had serious privacy limitations compared with Chaum’s 1981 protocol.

“Gradually, Bitcoin was gaining momentum and was no longer just a proposal but a real decentralized digital money actually working. To solve the privacy issues not implemented in Bitcoin, we then proposed the creation of sidechains such as Liquid in 2013 to help features be implemented, to gain experience and confidence with them, and to validate tradeoffs. And later I founded Blockstream with Greg Maxwell, Pieter Wuille and others to develop that technology and make it end-to-end usable.”

Cointelegraph asked if we could see the emails between Back and Satoshi, but Back was hesitant. Instead, he referred us to a tweet he sent last year stating his belief that Satoshi’s anonymity is “a Bitcoin feature” and that if he had any pieces of evidence that could help deduce Satoshi’s true identity he would “delete/shred them.”

“I've never revealed my emails to Satoshi and maybe I never will. Netiquette dictates not sharing emails without permission and I did not ask if Satoshi would be okay revealing personal emails.” 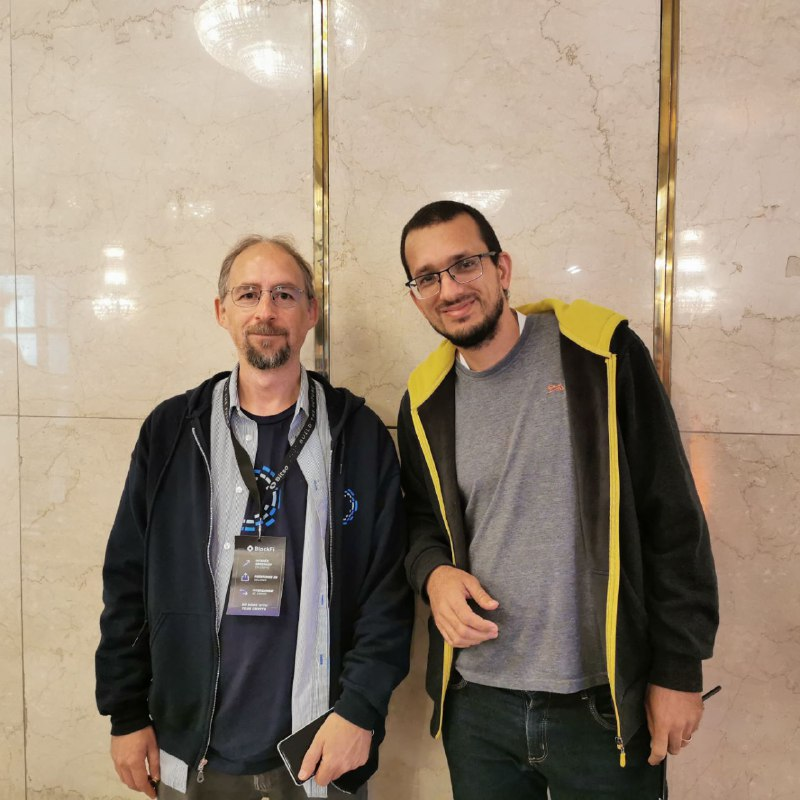