As Banks Shut Down Remittance Programs, a $51 Billion Opportunity Opens For Bitcoin

One of the most oft talked about advantages of Bitcoin is that is can be sent to anyone in the world for an extremely low fee. 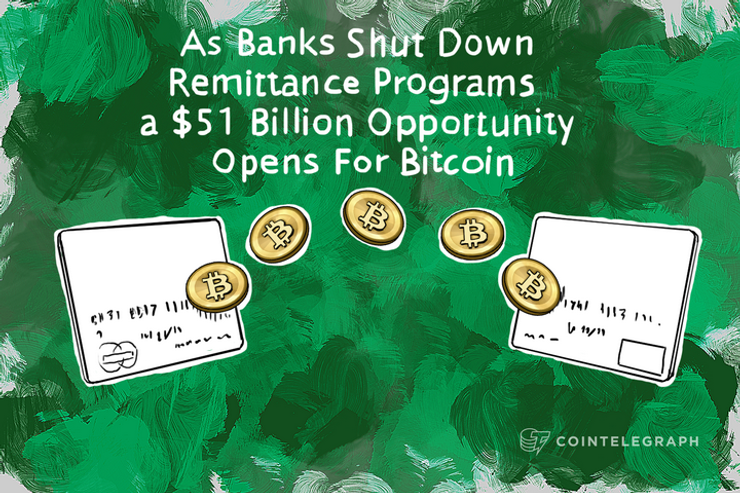 One of the most oft talked about advantages of Bitcoin is that is can be sent to anyone in the world for an extremely low fee. This had huge advantages not only for international businesses, but for immigrant workers looking to send some of their earning back to their families.

Banks and money transfer services like Western Union currently fill that space. But, with increased regulation after the HSBC drug lord money laundering scandal, some banks in the United States are dropping their low cost remittance transfer services.

According to the New York Times, Bank of America, JP Morgan Chase and Citigroup canceled programs that allowed migrant workers to send money back to their families for a lower than normal fee. The banks blame increased regulation causing the programs to be less profitable. Wells Fargo has not canceled its remittance program aimed at migrant workers, but claims that the regulation has lowered their profit margin.

There is an argument to be made if the claim that the Government fining HSBC the equivalent to five weeks of income is the real reason for banks dropping their remittance program, but that is not the focus of this article. Regardless, shutting down low cost transfers will have very little effect on terrorist networks and drug cartels.

While drug cartels and similar organizations can easily pay the fees associated with wire transfers or money transfer services the effect on regular migrant workers (and their families) will be much more pronounced. More than US$51 billion was sent out of the United States by migrant workers in 2012, oftentimes in small amounts. With banks dropping their low cost remittance, an enormous opportunity is opening up for Bitcoin.

While many banks will still transfer money to Mexico and other countries, according to the New York Times costs have been multiplied by up to as much as five times.  There are countries in an even worse position, like Somalia, and have very few banks that are willing to transfer money directly to them.

With banks increasing their fees, this has led to an increased reliance on services like Western Union. But, it could, and perhaps should, also be an opportunity for Bitcoin to grab some of the remittance market.

Many experts are expecting the lack of competition to allow Western Union to increase their fees. That would only be good for Bitcoin. In that case, Bitcoin's main advantage, its low cost transfer fee, would become even more pronounced.

Bitcoin, as you likely know, already had lower fees than anything available. Bank of America's SafeSend program had transferred money for free, but it could cost money to receive it on the other end. It was still considered one of the cheapest ways to send money to Mexico, but Bank of America has shut down the program.

Bitcoins also have the advantage of not being subject to a bank's rules, something some migrant workers might find appealing. The New York Times spoke with a migrant worker who was dissatisfied with Wells Fargo.

“Domingo Garcia, a 36-year-old limousine driver in Los Angeles, said he grew frustrated with Wells Fargo when one of his family’s remittances totaling roughly US$1,500 failed to clear. In the same week, he said, family members had tried to send another large remittance. His mother needed the money to pay for her chemotherapy treatment in Mexico. 'The hospital was saying it would not give her the medicine until they were paid,' Mr. Garcia said.”

The New York Times article never mentions cryptocurrencies, but the situation described sounds identical to scenarios brought up by Bitcoin evangelists when describing the need for the digital currency.

But, if Bitcoin wants to take advantage of the door banks and money transfer companies are leaving open for Bitcoin, the industry needs to increase its physical presence in the countries most likely to be the recipients of Bitcoin sent from other countries.

Local Bitcoins is an option for users in some of those areas, but that is not an acceptable or necessarily safe way of selling Bitcoins for end-users. If anyone in the industry wants to go after the USD $51 billion market that the banks are currently taking for granted, then they will have to make an easy and inexpensive experience for the end-user. It is easy enough for anyone to understand bringing their phone to either a human-teller or ATM, scanning their phone, putting in their amount and being handed their local currency.

It is when they have to connect to a bank account that they may or may not have that makes Bitcoin seem like too much trouble. ATMs and physical Bitcoin stores not only make it easy for users to understand and actually use, they can also act as an advertising and educational hub, teaching the curious about the currency.

Could Ukraine’s solution in integrating over 4,000 payment terminals to allow people to purchase Bitcoin be the answer? It’s certainly an option to consider and it appears to be more feasible and less expensive than to set up an equivalent number of standalone BTC ATMs.

The Bitcoin market is valued at over US$8 billion, which is impressive for a currency that has only existed since 2008 and started from the ground up. But, it is absolutely dwarfed by the aforementioned US$51 billion coming out of the United States each year. If Bitcoin can capture just a fraction of that market it would have a tremendous effect on not only the price but also the lives of migrant workers around the world.

Someone just needs to build the infrastructure.