Bitcoin price is stuck inside a narrow range and remains at the mercy of the stock market, which will likely decide the outcome of the next big move. 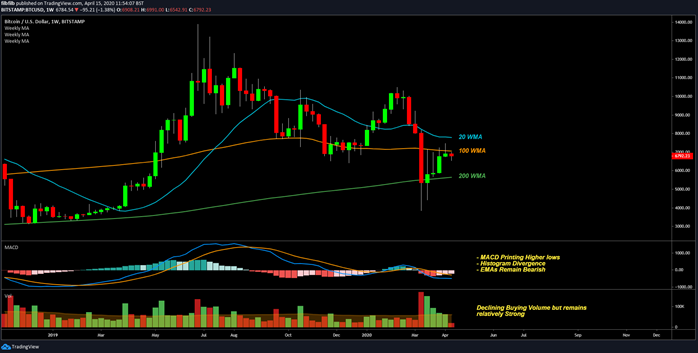 Volume saw a small decline last week but remains high relative to average. Price increasing as volume decreases is generally bearish, but given the context of relatively high volume, it could be interpreted as misleading in this instance.

The MACD is printing higher lows on the histogram, which also shows divergence building as prices print lower lows, which is largely due to the pace of recovery from the $3.8k bottom which was briefly visited. Despite this, the MACD is still trending below zero meaning that the 12 and 26 EMAs underpinning the indicator remain crossed bearish, indicating that the trend is down despite showing signs of weakening.

Looking overhead, the 20-week MA lies at $7,800 and usually plays a pivotal role in determining the overall bullish or bearish nature of the market. Reclaiming this line in the sand would be significant for the bulls. 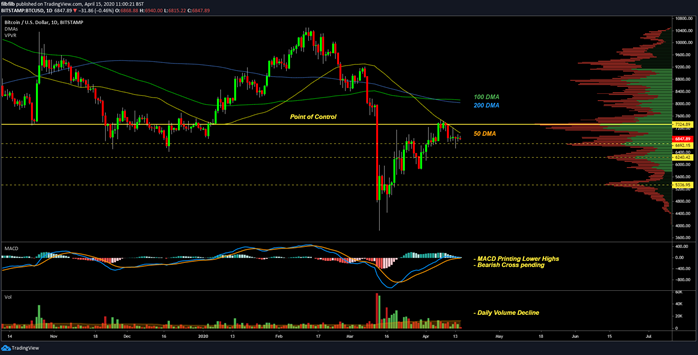 Looking more closely at the action so far this week, we can clearly see that Bitcoin is being held down by the 50-day moving average and the point of control (the price at which most volume has been traded).

Bitcoin now sits on previous resistance that’s now turned support with $6,700 being strongly defended over the weekend and most of the price action taking place just below $7,000.

The daily candles in this area are showing small bodies with wicks on either side showing indecision suggesting a volatile move could follow once the market decides on a direction. Daily volume has also noticeably decreased as would be expected in a period of consolidation.

The daily MACD shows Bitcoin losing momentum with the histogram dropping off and threatening a bearish cross.

Should Bitcoin break down, the visible profile visible range, or VPVR, suggests that there would be some buying interest around the $6,250 area. Resistance to the upside would be the 100 and 200 DMAs, which are declining from around $8K — the region of the 20-week moving average. 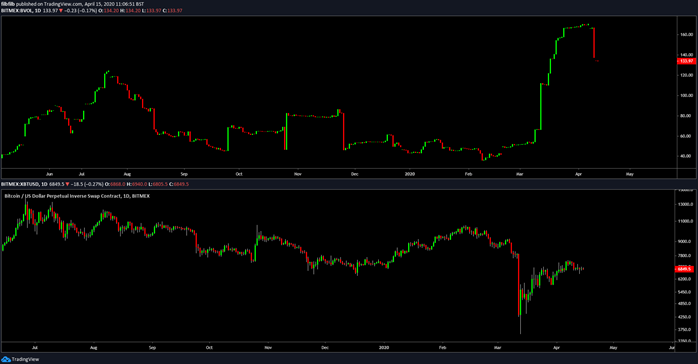 The 1-day volatility chart shows that since recording highs not seen since December 2017, it has rapidly declined and paused to consolidate before the market decides which direction it wants the price to move.

Correlation to traditional markets shows that Bitcoin’s price remains correlated to both Gold and the S&P 500. This suggests that in the short term Bitcoin is likely to continue to be at the mercy of the legacy markets, which have seen a positive move over the last couple of weeks. 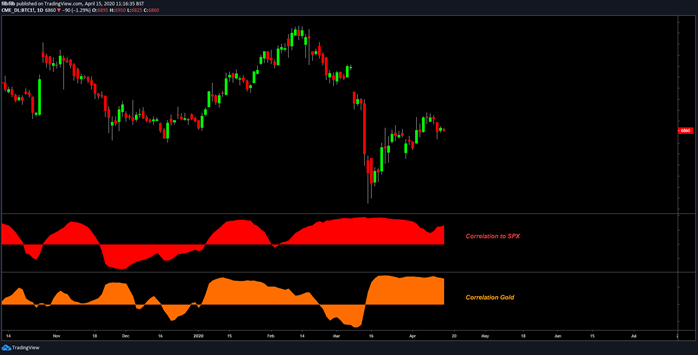 Both the daily and weekly charts for Bitcoin show that BTC/USD is at a decision point with around a month remaining before the halving of the block reward, which is ultimately meant to be a bullish event due to a halving in the market supply of Bitcoins being sold to market.

Both a bearish and bullish case can be made during the current period of consolidation/indecision. 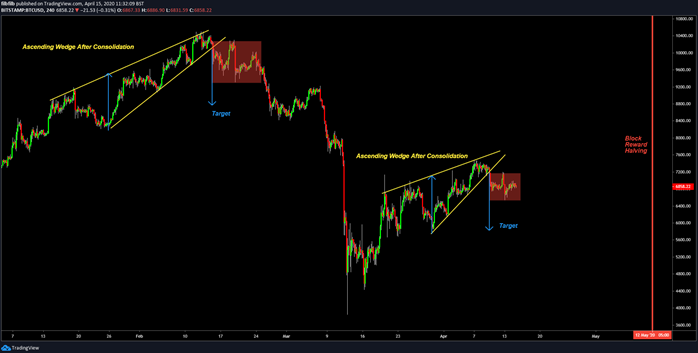 Bitcoin is currently trading in an ascending wedge, which when coupled with declining volume, is typically viewed as being bearish.

The price action is very similar to that we saw earlier in Q1 of the year with an initial break outside of the wedge forming a diamond pattern and the right shoulder of a head and shoulders top pattern, which ultimately broke down and met the technical downside target around $8,800.

Should a similar scenario play out, $6K would be expected to be retested and possibly lower.

While Bitcoin is currently in a bearish posture with a head and shoulders top, we have seen a similar market structure at the end of March in the ascent from the yearly lows.

A break above the right shoulder would not only invalidate the pattern but would mean breaking out of the 50-day moving average, which is holding the price down.

Should this occur, it would most likely leave the door open to test the moving averages discussed throughout and the order block at $7,800-$8,100. 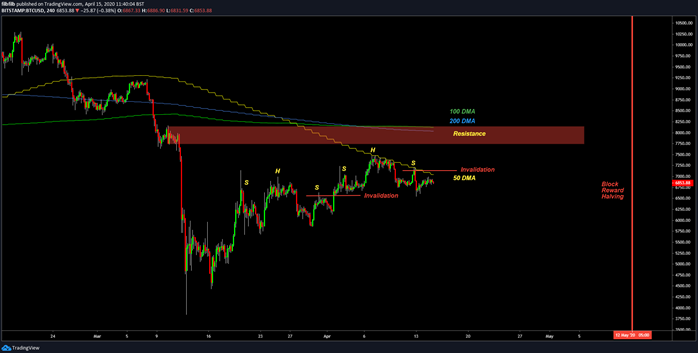 The period of consolidation looks to be rapidly coming to an end, with Bitcoin being on the cusp of a move towards $8K or back to retest $7K.

Due to the high correlation to the traditional markets and being in a generally volatile environment, Bitcoin could still see an extended period of consolidation before the halving, with a clear invalidation being prices sustained above $7,200 in the near future.

Breaking the confluence of resistance at $8K will be a tall order for the bulls, however, without the traditional markets continuing to move to the upside as long as the high correlation remains.