Bitcoin Has Now 100% Recovered From $3.7K Lows, Decoupling From Stocks

Bitcoin is now trading at twice the price it reached during the March crash, having added 10% in one day and left stocks in the dust.

Bitcoin (BTC) tested support at $7,500 on April 24 after a surprise surge saw the cryptocurrency beat out resistance and reliance on stocks.

Data from Coin360 and Cointelegraph Markets showed BTC/USD attempting to form new support at $7,500 on Thursday.

Since hitting a high of $7,760 the day before, only three brief dips to the $7,400 zone have appeared, indicating renewed market strength.

The high was Bitcoin’s best performance since mid-March, when markets infamously crashed up to 60%, in line with mayhem in traditional assets.

Since then, Bitcoin has slowly attempted to exit correlation with stocks and bonds, with Wednesday’s boost sharply contrasting with misery on oil markets and foreboding among traders.

The S&P 500, for example, saw a sharp contraction in mid-day trading due to news that a pharmaceutical company allegedly harboring an effective coronavirus cure did not, in fact, have one. 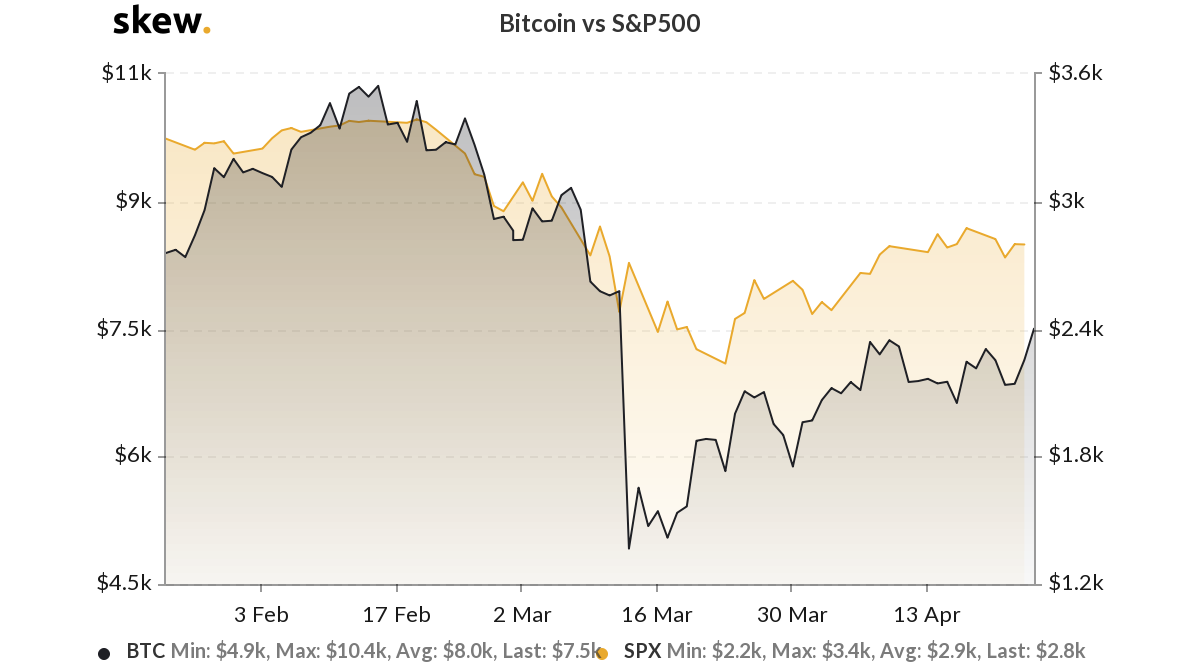 Cointelegraph analyst: $9K back in play

Against a backdrop of continued uncertainty, Bitcoin, therefore, looked all the more impressive — year-to-date, the cryptocurrency was up $300 or 4.2% at press time. Versus its March lows, BTC/USD was up over 100%.

“If we make some nicer slow retracements in the coming few days, I’m assuming we might even be going towards $8,400 or $9,000, as there is a CME gap over there which is a narrative for traders,” Cointelegraph Markets analyst Michaël van de Poppe forecast in his latest trading video on Wednesday.

“But if we close the daily below $7,400, then I’m assuming this to be one big trap, and I’m probably even considering any shorts again.”

In the event, Bitcoin did not see a daily close at lower levels.

Meanwhile, another theory surfacing among traders on social media focused on Bitcoin’s resemblance to the Nasdaq during and after the Dotcom Bubble.