Bitcoin price is attempting a move up to a new 2019 high after two bullish crosses, but needs to overtake $12K-$12.3K to keep the ball rolling.

Bitcoin is back to doing Bitcoin (BTC) things and anyone who bought the dip around the $9,350 local bottom is a happy camper. Surely those who employed a little leverage on that entry are even happier.

Before looking forward, let’s take a moment to review the “Keep It Simple Stupid” approach to trading. On Sept. 2, the Moving Average Convergence Divergence (MACD) pulled off a bullish Bitcoin price crossover and the histogram flipped positive on the daily time frame. 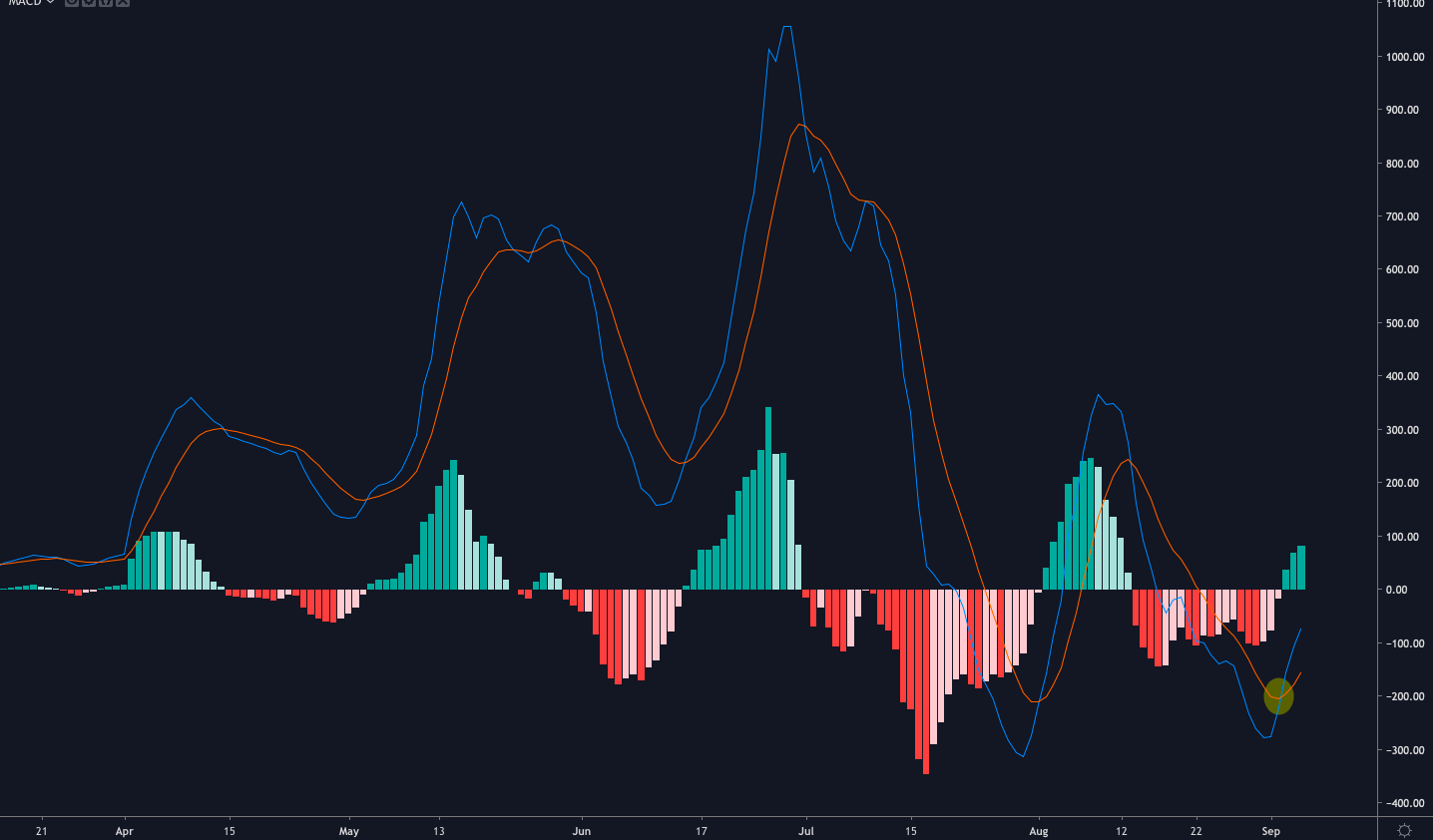 The MACD and signal line has yet to cross above 0 but on the shorter time frames it has already taken a bearish bias.

This suggests that those who missed the 16% bounce off the local bottom ($9,350) might consider sitting on their hands for a minute. However, it is well known that the MACD is a lagging indicator. An assortment of leading indicators suggest BTC/USD is bullish so one shouldn’t view the MACD in isolation.

While a somewhat unconventional way to assess price action, the daily RSI managed to pop out of the descending wedge after dropping to the predicted touch point at 37. 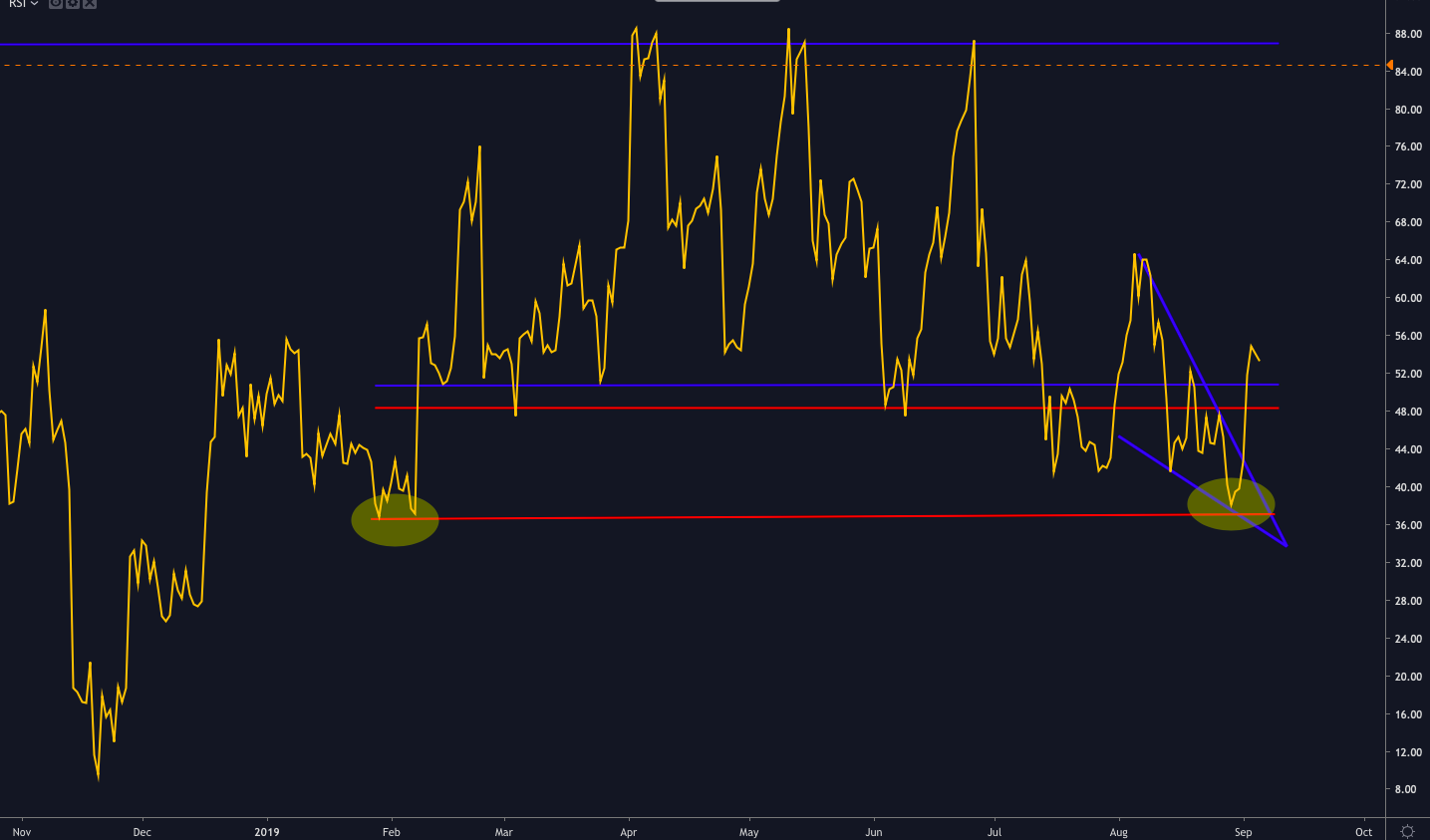 As of late, double bottoms have typically led to strong bounces so they are lao worth keeping an eye out for. The tweezer bottom at $9,321 was a signal that a turn around could be possible.

For example, popular trader Philip Swift recently pointed out that:

“A lot of people talked about the 128DMA or the 20WMA (which is even lower). Anyone who was waiting for the price to hit those got front ran. Historically, while they do get hit, on occasion they get front ran, like we saw here.”

Since June 26, Bitcoin price has been a swing traders paradise and it seems the party will continue. 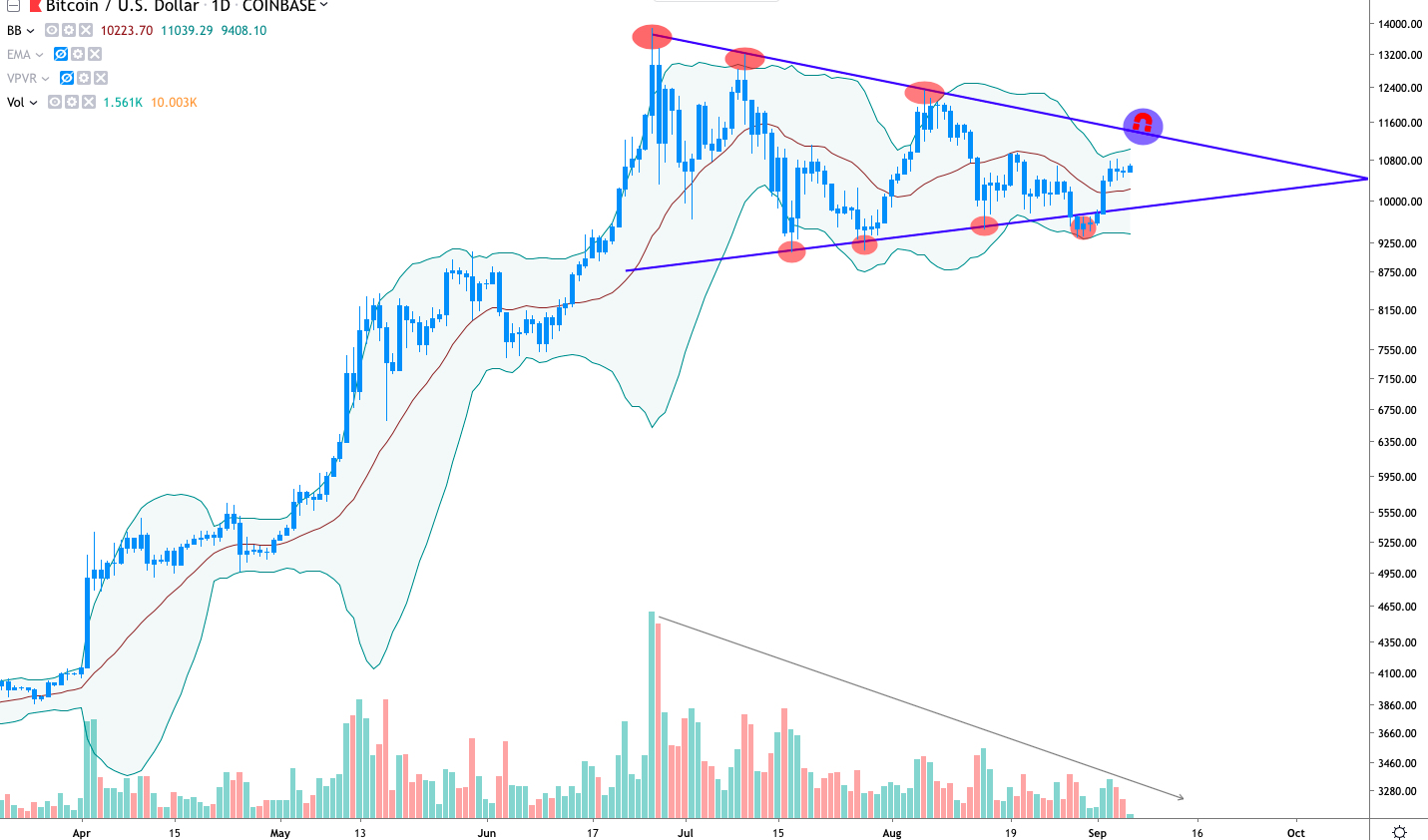 Bitcoin above $10,000 is a good sign for the bulls as the recent drop was nothing more than another touch on the lower arm of the pennant. The weekend recovery also placed BTC back into the narrowing pennant and on Tuesday Global Macro Investor CEO Raoul Pal tweeted the chart below and said:

“If you don’t have any Bitcoin then this looks like the last time to board the rocket ship… I LOVE wedge patterns like this. They have a high probability of success.”

Traders should expect some sort of decisive move on or around Sept. 15 to Sept.  23 as this brings Bitcoin closer to the vertex of the narrowing pennant. Bakkt is expected to launch on Sept. 23 but it’s possible that the event is already priced in and will not have an immediate impact on Bitcoin’s spot price.

Even if BTC tilts to the downside, there is still time for consolidation within the larger wedge which extends to Nov. 11 (assuming BTC continues within the current range from $9,500 to $11,500).

One thing to watch for is declining bull and bear volume as volatility tapers off and Bitcoin comes closer to setting a lower low below $9,100. This shows the consolidation is weaker than desired and prone to an assault from bears over the short-term.

A move to $11,400, followed by $12,050 would be more convincing. It would show that a trend reversal is confirmed. Bitcoin price will be back on track if it can make it to $12,300 over the coming week and the Volume Profile Visible Range (VPVR) shows minimal resistance selling pressure above this point. 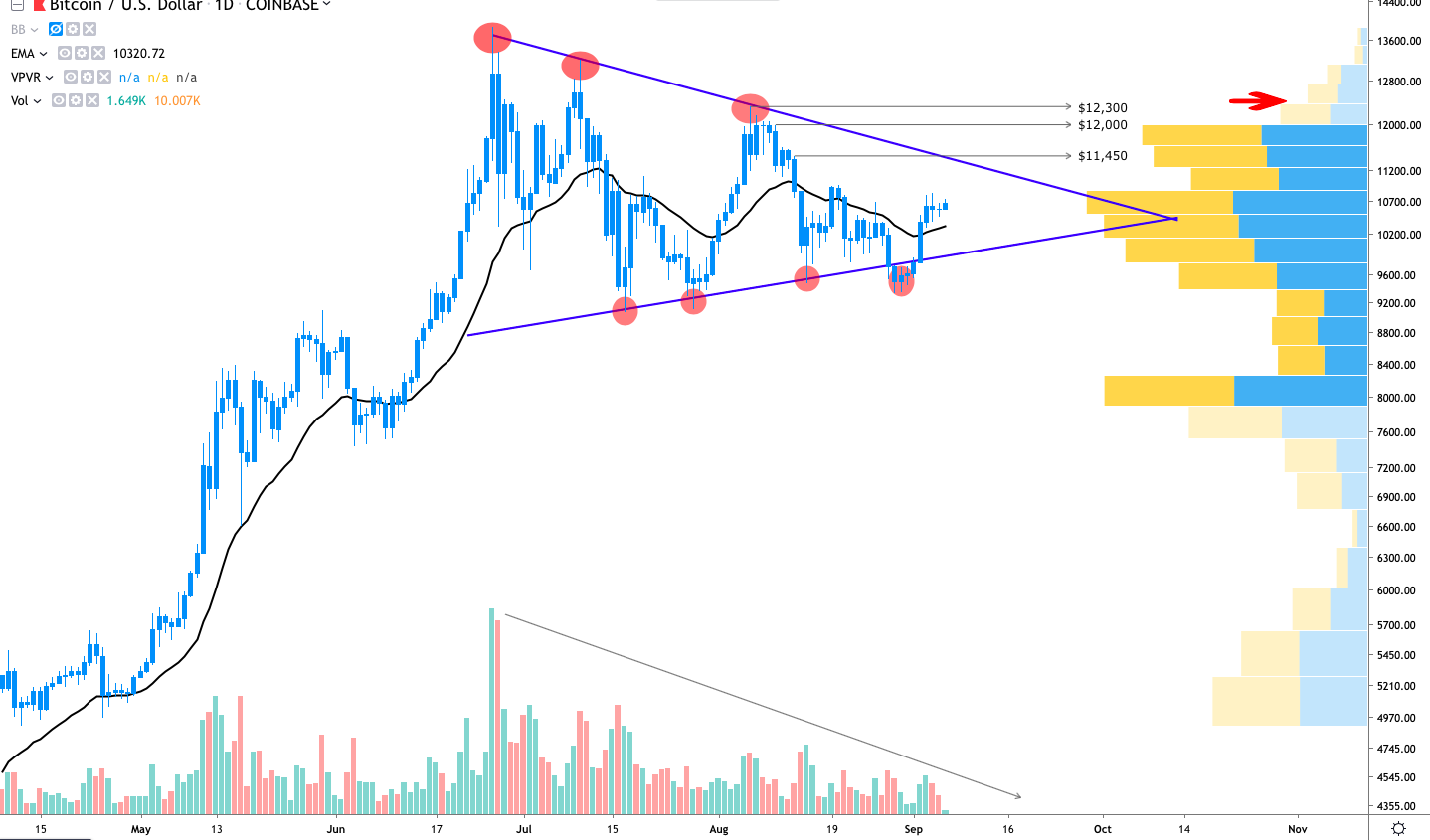 As mentioned previously, another area to watch is BTC/USD drawing nearer to the 20-weekly moving average (WMA) on the Bollinger Band indicator. It would be comforting to see BTC lift away from the 20-MA by setting some higher highs on the 3-day and weekly timeframe. 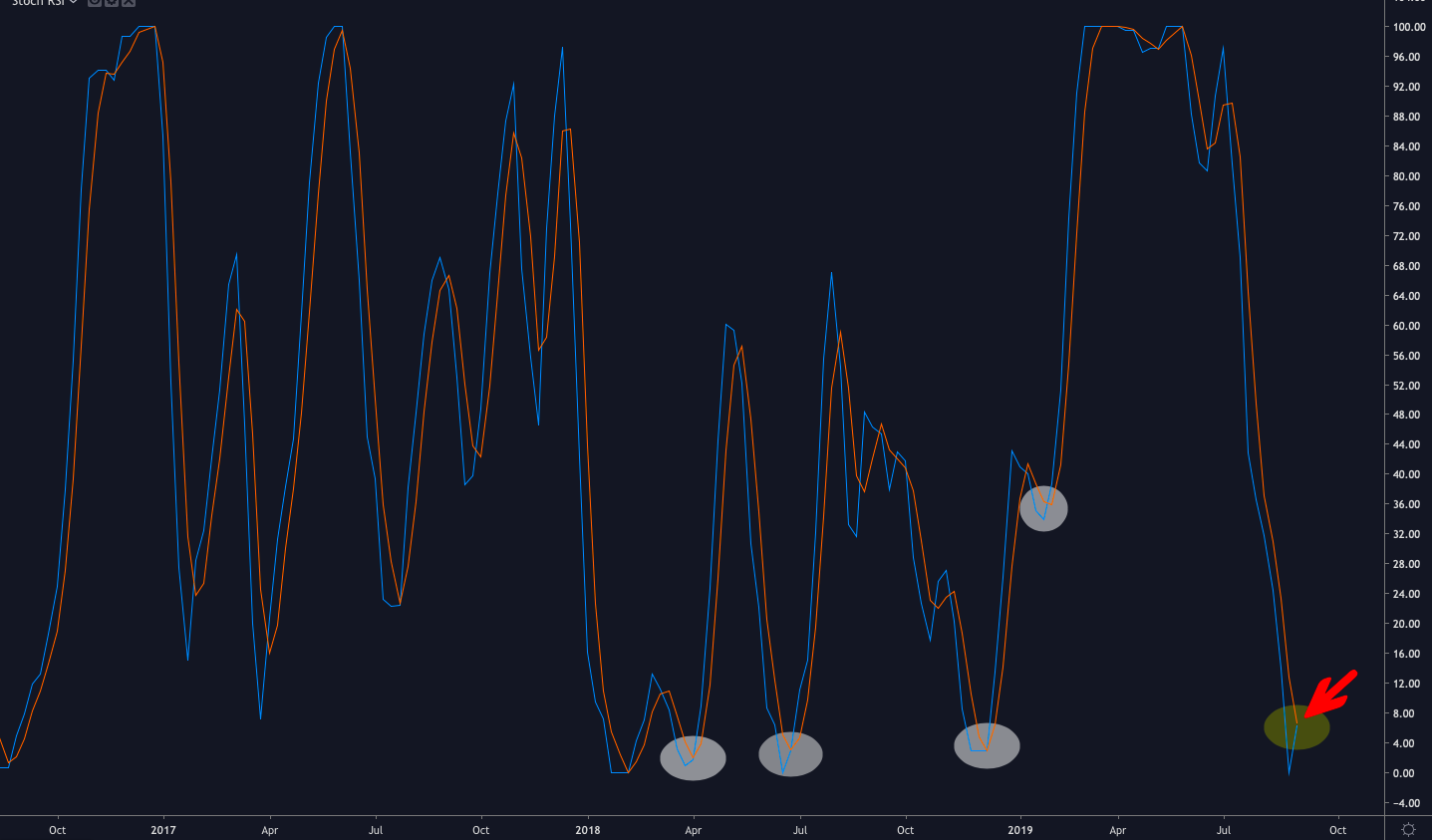 Typically these crossovers on the weekly Stoch have been followed by strong upside and downside moves so we will perceive the impending crossover as a bullish sign for Bitcoin.

Earlier this week, Bitcoin has crossed the $10,000 for the 19th time since July and pro-trader Josh Rager recently pointed out that despite pullbacks, Bitcoin’s dominance rate continues to climb and this is also a bullish indicator. 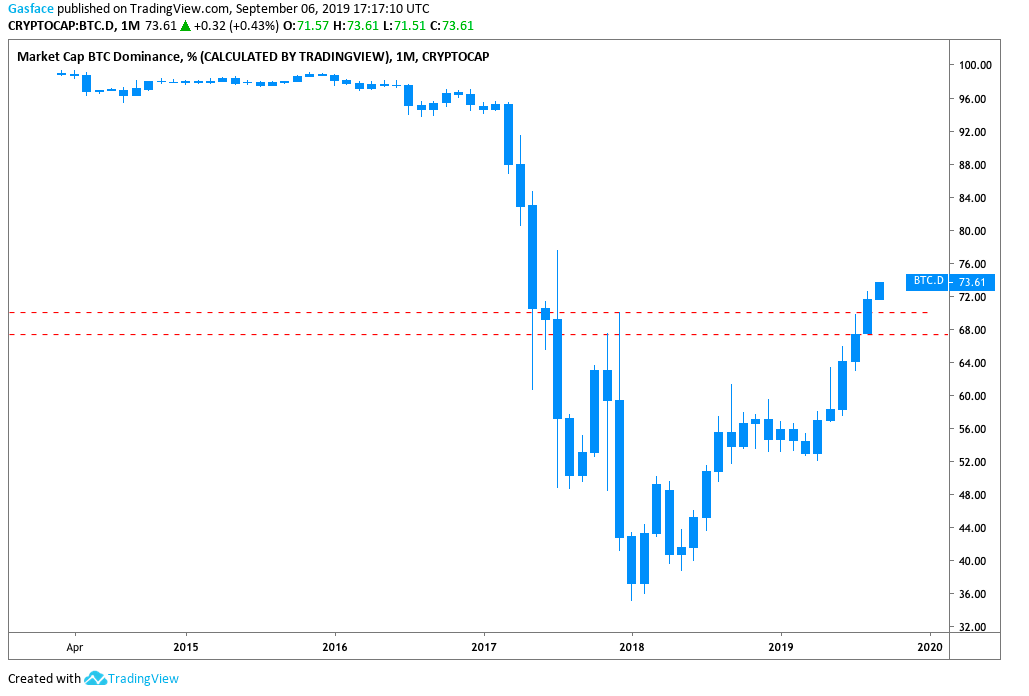 “Bitcoin dominance monthly chart looks like the end to the bottom of a market. Looks as if BTC.D capitulated, ‘v’ bottomed followed by a strong recovery. At 72% now, highest since July 2017. With Bakkt coming, we may not see a strong pullback in BTC market dominance anytime soon.”

Currently, there seems to be little reason to worry unless Bitcoin price drops below $9,100. Though, the majority of traders will likely be considering buying the dip at that point.