Bitcoin price bulls print fifth consecutive green weekly candle but remain at the mercy of traditional markets as the price dipped below $7K on Monday once more.

Bitcoin has begun the week with a sell-off, with prices pushing below $7,000, following traditional markets which are also down around 2% on Monday morning.

EOS, which had a strong 4% positive week last week, is proving more resilient than both Bitcoin and Ether and is trading flat at $2.60.

Bitcoin dominance was down around 1.2% last week just below 64%, which was mainly as a result of the gains printed by ETH, EOS, Link and Tezos.

The 200 and 100-week moving averages had previously been acting as support and resistance, with the 100 WMA being repeatedly tested over the previous five weeks defined by higher weekly closes illustrating a lack of selling interest.

The weekly close marginally above the 100-week moving average (MA) also means that the bulls have pushed prices 50% of the way back to the 2020 highs, with the 20-week MA and 61.8% retracement being the next obstacle to overcome just below $8K if momentum can be maintained. 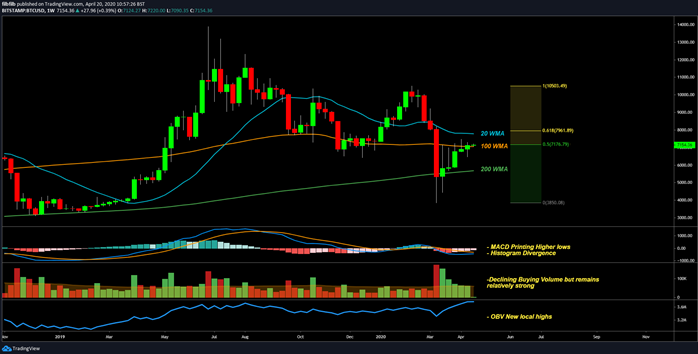 Meanwhile, the Moving Average Convergence Divergence (MACD) indicator is showing that the bulls are close to achieving a bullish cross, which has previously preceded larger bullish moves, with the last two instances of occurrence taking the price of Bitcoin across $10K.

Additionally, there is an unconfirmed bullish divergence on the histogram, which supports the case that the bears are no longer in control of the momentum. Also, last week’s volume remained relatively high showing that buyers have been in control of price action now for five solid weeks.

This buying volume is clearly shown by the On Balance Volume (OBV) indicator, which tracts cumulative volume dictated by price direction. This particular indicator, therefore, highlights the impact of continued high volume buying, printing higher highs and surpassing the 2020 peak, which further illustrates that the bulls have been firmly in the driving seat in recent weeks. 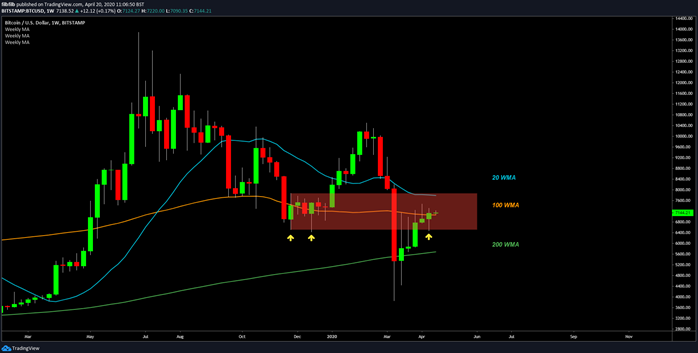 Last week’s lows of $6,500 demonstrated that the bulls are interested in buying the $6,500 level once more, as they were back in December 2019, which defined the period of accumulation ahead of the fast move to $10K.

Bitcoin appears to have reclaimed this accumulation range once more and it would be expected that $6,500 will be an area of buying interest should it be retested. However, the bulls need to reach out to the upper $7,000s to show strength.

The latter half of last week saw Bitcoin break out of both the 50-day MA as well as the 100-week MA. The 200 and 100-day moving averages are overhead, also shepherding the top of the previous accumulation range that defined Q4 2019.

The six weeks needed to break above this consolidation earlier in the year implies that significant work remains for the bulls in order to break out and make a move toward $10K.

Early positive signs would come in the form of persistent buying and higher lows, which has been the case. But Bitcoin still remains some 12% below a more definitive test of resistance. 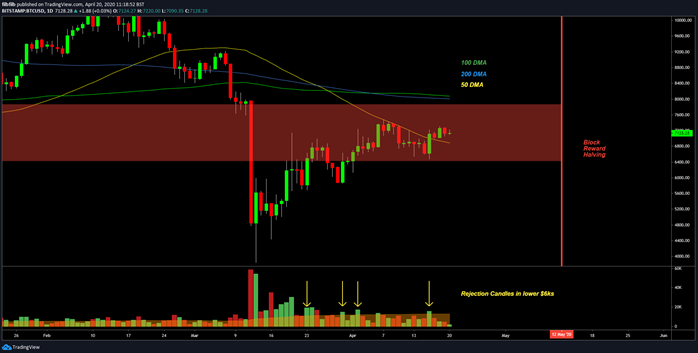 Bitcoin has also arguably broken out of the descending resistance level, which led in from February through to the capitulation drop. The chart pattern is similar to the so-called “Bump and run reversal” pattern that, once broken, can lead to a price target being as high as that from the start of the lead-in, which would imply a measured target being the 2020 highs of $10K.

This pattern requires a high volume breakout that has arguably been missing and, as such, remains unconfirmed but certainly of interest. 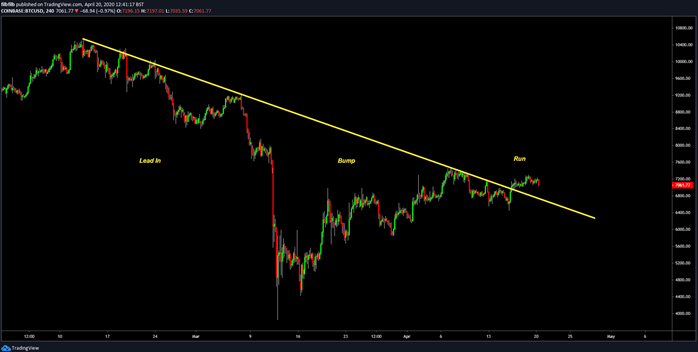 Bitcoin has been strongly correlated to the traditional markets through the 2020 pandemic selloff, with the correlation to the S&P 500 being closer to that of gold, which to date, has been the safe haven of choice for investors.

The correlation to the S&P 500 implies that Bitcoin is still viewed as a risk-on asset and a shakedown of the traditional markets could spell trouble for the price of Bitcoin, with warning shots having already been fired on Monday morning taking prices below $7K. 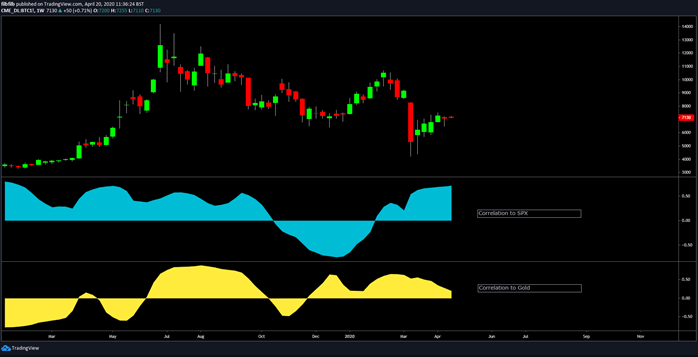 Overall sentiment regarding the price of Bitcoin remains low, with the fear and greed index implying that the market generally remains in a state of extreme fear. Funding has also remained either negative or close to zero with futures contracts also trading in backwardation below spot.

Historically times of extreme fear have been periods of peak opportunity to buy Bitcoin, with the majority being too fearful to take advantage of low prices.

The herd is typically wrong in the markets and as such some contrarian investors will see this as a signal to buy. 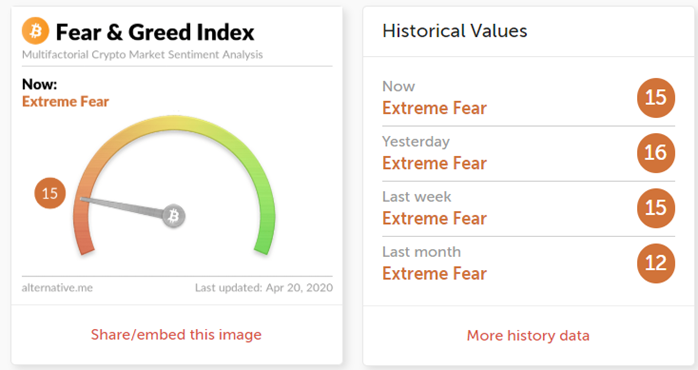 In summary, Bitcoin remains evidently tied to the traditional markets, which remain in a similar state of shock and uncertainty.

With the block reward halving three weeks away, Bitcoin may still be viewed as being at a discount in comparison to prices traded earlier in the year in anticipation of the halving event. Evidence for this is that the previous accumulation range above $6,500 appears to be holding in the short term.

As we move into the week, the bulls will be looking at $6,500 as a buying opportunity, whereas the bears will be defending $7,200. A bullish break to the upside would mean a target of the 20-week moving average in the upper $7,000s.