Key U.S. federal stimulus programs are set to expire soon and if they are not renewed the stock market and Bitcoin price could crash again.

A recent newsletter to Delphi Digital clients delved into the economic aftermath of the coronavirus pandemic and how the current fiscal stimulus package from the U.S. Federal Reserve could be propping up equities markets and the entire economy.

According to the firm, COVID-19-related government spending has breached the $1.1 trillion mark, bringing June’s monthly budget deficit to $864 billion, the worst in U.S. history. This has pushed the country’s deficit to $2.7 trillion for the first half of 2020.

As the Federal Reserve continues to print money to bolster the economy, important key programs like the Paycheck Protection Program (PPP) are struggling to produce the expected results as more than 65,000 businesses in the U.S. shut their doors in the last 5 months.

Moreover, Goldman Sachs found that 88% of PPP loan beneficiaries are expected to burn through their loans by the first week of August. The International Monetary Fund has also warned that the number of small and mid-sized business filing for bankruptcy may soon triple.

Alongside the massive number of small and medium-sized businesses shutting down, revenue is down about 20% for the ones that are still open. This comes as no shock given the alarming number of unemployment claims that have been the result of lengthy government-mandated shutdowns.

Furthermore, as shown on the chart above, applications for unemployment have decreased, but the recovery is beginning to stall.

With Bitcoin trading sideways for the last month and dwindling volume both on spot and derivative markets, many worry that another crash in the U.S. economy could bring Bitcoin price down like it did on March 12.

Analysts are now suggesting that if another government stimulus relief package is not approved, investor sentiment will soon turn bearish. If the stock market falls, Bitcoin is likely to follow due to the rising correlation levels between the two.

According to data from Skew, realized volatility between Bitcoin and the S&P 500 continues to reach new highs and currently sits at 38.9%.

A crash on the stock market could also result in a shock to Bitcoin price and perhaps trigger a cascade of liquidations similar to those that took place on March 12. 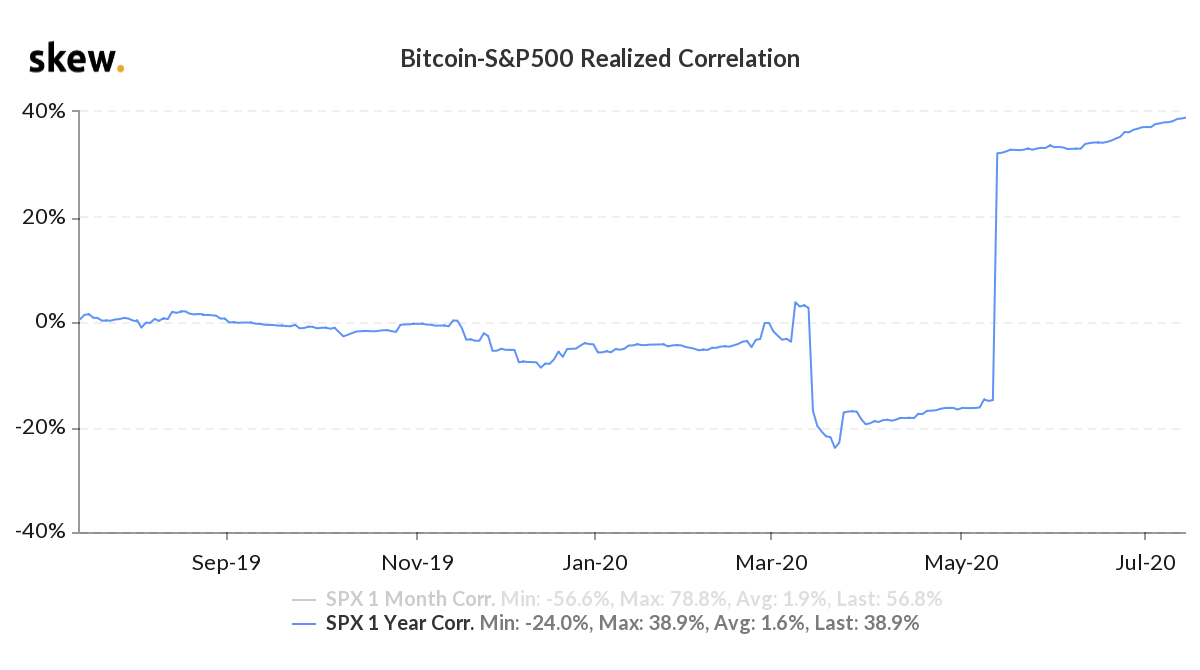 Currently, in the U.S. COVID-19 infection rates are pushing to new all-time highs and this is occurring as PPP loan recipients are expected to exhaust their funds.

Even more daunting is the fact that at the end of July, the additional federal unemployment benefits provided by the CARES Act are set to cease.

These should be interpreted as bearish signals given the high unemployment rate and sharp reduction in consumer spending but recent reporting from Bloomberg suggests Wall Street remains bullish on stocks.

This is primarily because investors expect that the Fed will eventually initiate a new round of stimulus that will prop up the stock and bond markets. Analysts at Delphi Digital also believe that a new relief bill will be approved and in the client newsletter the group explained that:

“There’s been much debate in Washington as to the appropriate next steps, but it finally appears lawmakers on both sides of the aisle understand the need to act. With President Trump’s reelection chances slipping through his grasp, Republican leaders would be shooting themselves in the foot if they were to delay or block proposals for additional fiscal support.”