Blockchain in Media: How Can Blockchain Fight Piracy?

Rights management, bounty hunting and content surveillance — how will blockchain help with these?

13430 Total views
342 Total shares
Listen to article
0:00
Analysis
Own this piece of history

Television industry research firm Digital TV Research forecasted last year that the revenue loss of TV series and films due to online piracy would reach $52 billion by 2022. Since this figure doesn’t factor in the revenue that would be lost to the piracy of sport, games, pay TV and other forms of media content, the sense is that the cost of piracy to the media industry is much larger than $52 billion.

The reality is that blockchain — as of today — isn’t ready to eradicate piracy. Moreover, any digital media created for human consumption can be captured and duplicated. It is telling that, when asked questions about how blockchain could help solve issues around piracy and ad transparency in the media space, leaders of the blockchain projects we spoke with seemed more confident speaking about ad transparency and less about piracy.

Piracy is behavioral and there isn’t sufficient evidence showing why people do it, according to a report from CREATe, a U.K. copyright research body. The researchers found that most of the knowledge about unauthorized file sharing relates to music, pointing out that the reasons people unlawfully share music aren't necessarily the same with other forms of content. For instance, people might share music files unlawfully because that’s how it’s done in their community. On the other hand, the lack of access in certain countries might be a motivation for people to share TV programs online. Unaffordability might be the reason for other forms of content, especially in the case of games and software — however, this report doesn't look at software. The idea that certain content has no financial value might also be a culprit.

Again, none of the above is conclusive and complete, meaning that there is no guarantee that a blockchain project built in response to any of the above reasons why people might unlawfully share media content will stop the piracy of that particular kind of content. The CREATe report points out that both the industry and legislators need robust evidence on why people share any kind of media content unlawfully in order to be able to achieve success. Current evidence suggests that blockchain can — at best — only be a component of a larger initiative to fight piracy. In other words, blockchain can help fight piracy to some extent. It’s just unlikely that it will eradicate piracy alone.

Some experts suggest that it could become impossible or extremely difficult to share any media content unlawfully if the entire internet were built on blockchain technology. That might happen someday, but at present, here are some practical approaches for how blockchain could play a part in fighting piracy.

Vevue, the blockchain streaming service that will host the movie “No Postage Necessary,” is working on a technology — code-named surveillance smart contract — that will be able to track the life cycle of any content. “If someone copies content tracked by our technology by any possible means, including videoing or recording a screen, our platform will be able to identify the owner of the device/system where the content was last played,” founder Thomas Olson said.

As you can probably guess by now, blockchain doesn’t do the tracking here. The process of tracking and identifying copied content is complex and goes beyond blockchain, Olson added. Vevue is developing a smart computational engine, which is pending a patent, to perform the task of protecting content. Vevue declined to give details of its so-called unique process for tracking and identifying content because it’s a trade secret that's yet to have full legal protection.

However, in response to a question on whether AI could be part of what helps blockchain better fight piracy, Olson answered, "Yes."

Here’s a flow of how the Vevue’s blockchain-based media tracking technology will work. 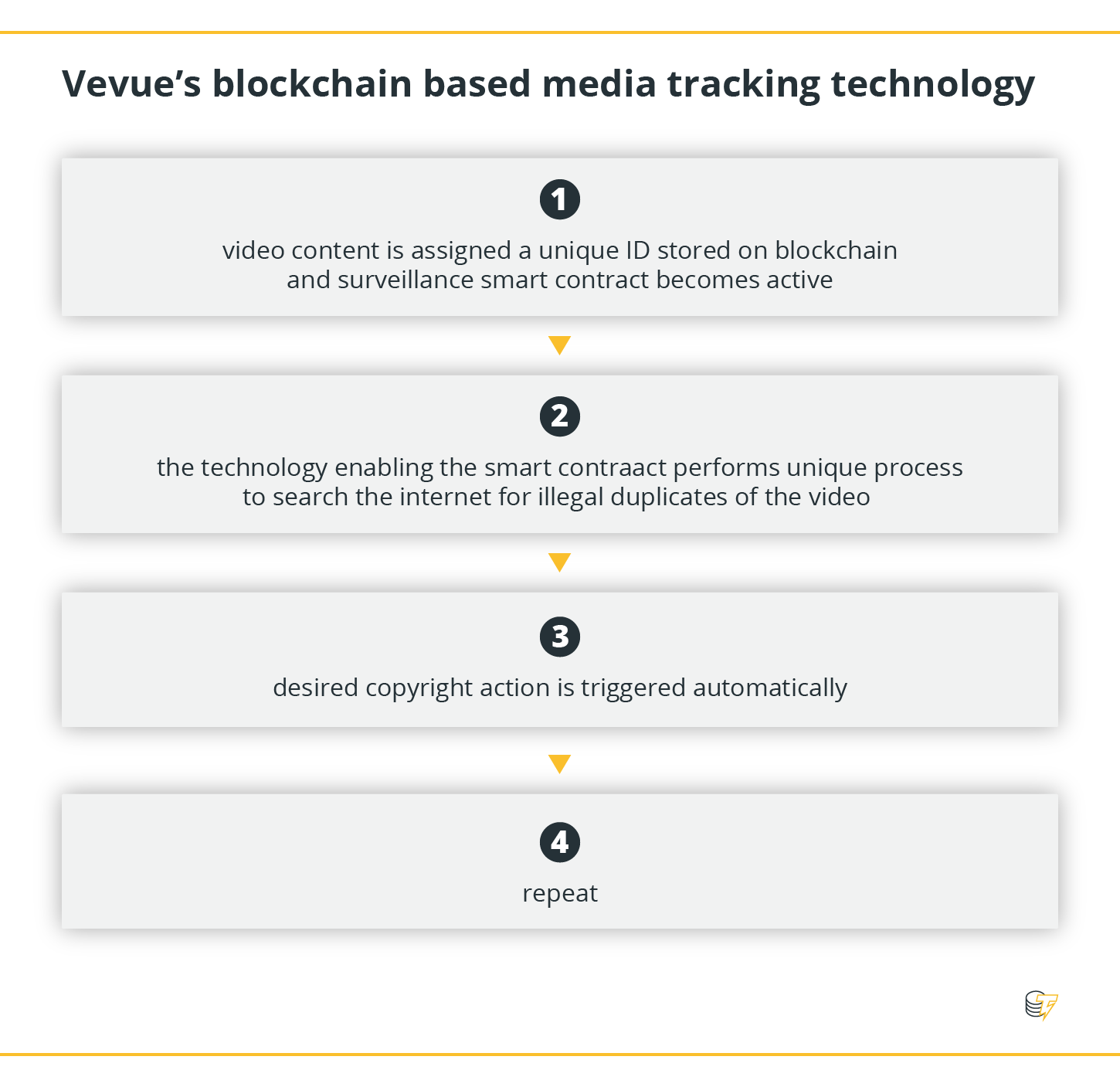 Indeed, the description of how Vevue’s technology works looks similar to to how the combination of forensic watermarking and blockchain works.

Blockchain as a bounty hunting platform

CustosTech, a South African-based company, is using the Bitcoin blockchain to help owners of intellectual property fight piracy. CustosTech has built a proprietary forensic watermarking technology that makes it possible to embed a monetary reward — Bitcoin, in this case — that is linked to a unique serial number into media files, such as video, audio, eBooks, and audiobooks, during the encoding process.

Also called digital watermarking, the forensic watermarking technology has been around for a while and there are tons of existing companies offering digital watermarking services for just about any kind of media content — even content served through over-the-top applications. The forensic watermark (a unique serial number) is usually placed either at random points or throughout the length of a piece of media content and it is imperceptible to the recipient of the content. The way it’s embedded across the length of a file also makes it difficult to remove. What’s more is that the unique serial number serves to identify the recipient of the media file and it is unaffected by resizing, downscaling, transcoding, recording or any other kind of alteration that the media content can be subjected to. Therefore, in the event of a suspected pirated file, the unique serial number can be extracted to determine the legal recipient of the file — hence, the origin of the pirated content.

As you can probably tell, it is only the players in the media space that are incentivized to find pirated media files. However, CustosTech is using the global nature of blockchain and Bitcoin to incentivize the average consumer to hunt for media files that might have been unlawfully shared globally. Anyone can join CustosTech’s Bitcoin bounty hunting program by applying on its site. If hired, the bounty hunter receives a tool called ‘Privateer’ to use in screening content protected by CustosTech for piracy. Once a bounty hunter finds pirated content, they extract the Bitcoin attached to that file to their own Bitcoin wallet. The extraction process sends the unique serial number, which reveals the origin of the pirated content, to CustosTech and the content owner for the desired copyright infringement action — legal action, cancellation of accounts and blacklisting, for instance. For this to be worthwhile, CustosTech requires that the cost of the action taken against the infringer be greater than the value of the embedded Bitcoin.

Note that blockchain only serves as an incentive system to allow the underlying watermarking technology to yield greater results.

This might be difficult to implement in the video-on-demand space. However, the gaming industry can benefit from this. There is already a practice in the mobile gaming space whereby users are incentivized to watch ads with in-game virtual credits. Rawg, a cross-device game discovery platform, is looking to help the gaming industry reduce piracy by building a blockchain system that rewards gamers with tokens for in-game achievements.

Granted, Rawg wasn’t started to fight piracy specifically. Rawg is essentially a cross-device game discovery platform that collects information about all the games that a gamer owns across all their gaming devices in one place to improve the gamer’s experience. This helps gamers gain fuller insight into how they are playing games across different gaming platforms and thereby receive recommendations. For instance, based on a gamer’s preferences on Xbox, Rawg can recommend similar PlayStation or desktop games. A gamer can also follow other gamers of similar interests to see what they’re playing. Before venturing into blockchain, Rawg had already built a community of gamers who had already synchronized over 50,000 games.

Rawg is taking it one step further by giving more power to gamers by allowing them to earn tokens — which can be exchanged for fiat — for in-game achievements. This inherently discourages piracy, in a way, because gamers can only synchronize achievements earned from non-pirated games on official platforms. If gamers know that they can recoup the money spent on purchasing a game, and potentially earn more money on top of that, they might be less interested in pirating games, according to Rawg.

A number of other startups, including Crycash, Enjin, Dmarket and many others, are also trying to help gamers monetize their game time. Rawg is featured here because it already has a working system that could use blockchain to discourage piracy at scale.

Another startup, Dot Blockchain Media, which is developing a new file format — dubbed “.BC” — to help unify rights management in the music industry, is also using forensic watermarking to embed blockchain address into music files. Unlike CustosTech, Dot Blockchain isn’t looking to hunt down the pirates of music files — at least not directly. Instead, it just wants to have the entire music industry register music information, from the artist to the producer, and other commercial information on the immutable system that is blockchain. The company has already released a “.BC” music file — STOLAR’s “Forget and Feel,” distributed by FUGA. The song is available on iTunes, Google, Spotify and other music platforms, and the watermark information can be read with the Digimarc Discover app.

It’s important to point out that this piece only looks into what is possible based on the currently available products. It doesn’t feature any company that doesn’t have a working product.