Blockchain Spreads Its Vines to Root Out Counterfeit Wines and Spirits

When it comes to counterfeiting booze, wine is an easy target. Fortunately, blockchain makes a particularly good pairing with the wine market.

5210 Total views
35 Total shares
Listen to article
0:00
Analysis
Own this piece of history

For wine collectors, provenance is everything. With as much as 20% of all wine circulating the globe deemed to be fake, it’s hardly surprising. In days past, sniffing out a bogus burgundy required a good nose and an eye for detail. Now, thanks to blockchain technology, the problem is being resolved at its root — or should that be at the vine?

Sommeliers, vintners, collectors and other connoisseurs of the red stuff go to great lengths to determine authenticity. From the weight of the bottle to eyeing anomalies in the year of production, right down to inspection of the bottle glass, the stamp on the cork and the label glue, the tiniest discrepancy can be the biggest red flag. But somehow, every year, thousands of bottles of counterfeit wine slip the net.

That’s because wine forgers also go to great lengths. Manufacturing a brand new bottle of burgundy disguised as a 60-year-old vintage is no easy feat. It isn’t always about the bottle’s aesthetic either; the taste is just as, if not more, important. Fraudsters have been known to recreate every single note, using a hybrid blend of wines that mimic the flavor of an original — like modern-day alchemists creating gold.

Because to some, gold is essentially what fine wine is — and what forgeries can become. In the past 16 years, the burgundy 150, an index that tracks prices for the most actively traded vintages, has risen by nearly 450%. 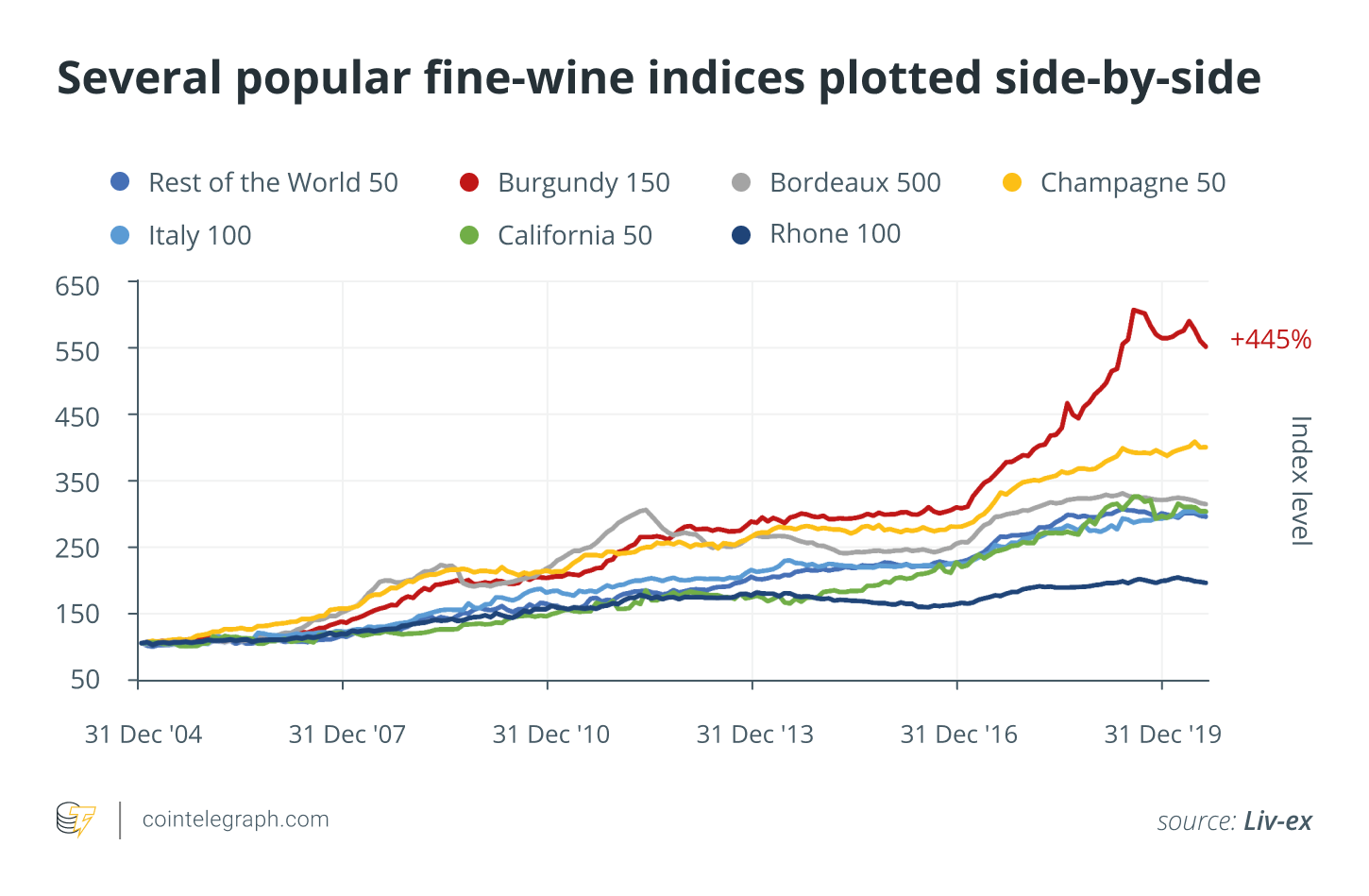 A climactic fine-wine renaissance occurred between 2016 and 2018 amid uncertainty over Brexit and Donald Trump’s presidency, causing some experts to speculate that investors were using wine as a store of value in such times, not unlike gold. Wine’s parallels with gold don’t end there. As an asset class, fine wines, similar to the precious metal, are extremely scarce, becoming even more scarce whenever someone decides that their $300,000 bottle of 1947 Cheval Blanc is ready to chug.

Others have made the analogy — perhaps slightly more cynically — that vintage wines are more akin to the tech boom in the 2000s, where a ".com" suffix could append a company an extra set of zeros. Similarly, a vintage Hermitage label affixed to any old bottle of plonk could net upward of $10,000. Sure enough, that happens all too often in the wine industry.

While actual estimates are scarce for obvious reasons, counterfeit wines are thought to be a multibillion-dollar problem. Sour Grapes, a 2016 documentary, recounts the rise and dramatic fall of prolific counterfeit wine fraudster Rudy Kurniawan, who was instrumental in bringing about the counterfeit wine market — and its hefty price tags. But while a notable case, it’s just one of many in a vast counterfeiting racket.

And it’s not confined to fine wine either. A 2018 report from the European Union Intellectual Property Office finds that in Europe alone, approximately 2.7 billion euros ($3 billion United States dollars) is lost per year due to counterfeit wine and spirits.

The illegal spirits market is potentially a bigger issue, with health complications and deaths arising from bogus gins, vodkas and whiskeys laced with battery acid and even methanol — a toxic chemical used in antifreeze. Attempts to crack down on the liquor fraud haven’t been without their merit.

Speaking to Cointelegraph, Marton Ven, chief marketing officer of TE-Food — a farm-to-table food traceability solution firm — explained that molecular analysis of spirits, via a system known as Raman spectroscopy, can expose phony liquor. Ven added the caveat, however, that rolling out this process on a broader scale would be both costly and inefficient. The same goes for centralized databases already in use for tracing wine. Due to the issues inherent within centralized databases, the scope for corruption and subversion is relatively broad.

A modern solution to a vintage problem

Fortunately, blockchain verification may have stamped out the counterfeit wine issue for good. Blockchain ecosystem Nem’s latest offshoot, Symbol, is a blockchain solution geared toward fighting fraud — specifically within the fine wines sector. Symbol verifies and tracks a large number of transactions per second, enabling raw materials, and their end products, to be traced efficiently. From grape to bottle to the journey on to its final destination, everything tracked through Symbol is recorded on an immutable blockchain, ensuring authenticity at every stage.

Disposable smart contracts ensure data privacy while requiring confirmation of authenticity before payment is released, incentivizing supply-chain intermediaries to verify authenticity independently. The approach can similarly be extended between retailers and customers, closing up remaining gaps in the supply chain.

Dave Hodgson, managing director of Nem Ventures, told Cointelegraph that by making notes of itinerary or product information; bottle, box, crate or pallet of wine tracking; serial-number tracking; and so on, the wine becomes virtually tamper-proof. However, according to Hodgson, Symbol’s scope could dig down even further — quite literally:

"It is also possible to extrapolate this further (for higher value liquor, more likely) to have an IoT sensor in the tracking solution to record things such as the temperature, moisture content, or the GPS location of the cases/containers. Additionally, there could be IoT sensors in the soil to detect PH balance, chemicals, pesticide usage, and ripeness."

Symbol isn’t the first to harness blockchain in wine verification. In fact, there are myriad blockchain-based solutions on the market, each offering slight variations on the last. A solution from blockchain startup WeCan takes the verification of wine beyond the supply chain, extending it to private auctions and buyers.

Akin to Symbol, WeCan records every facet of information about the wine, from producer to the original vintner and even its previous owners, and tethers it to the blockchain. A scannable QR code exposes the data, which even goes as far as to detail purchase and price history. Camille Ernoult, who is responsible for marketing and communications at WeCan, told Cointelegraph:

"Liquor fraud is a real problem in the industry, with more than 20% of bottles sold being counterfeit. Blockchain could help this matter by tracing the whole value chain from production to sale. This would mean every actor of the chain should enter the information that would then be immutable, time stamped and securely registered on a blockchain platform."

Even one of the Big Four auditing firms, Ernst & Young, has jumped into the blockchain verification game. The Tattoo wine platform, which caters directly to hotels, restaurants and cafes, sells wines straight from the vineyard, excluding interference from within the private market. Each Bottle is "tattooed" (hence the name) with its own QR code, detailing data such as grape variety, types of fertilizers used on crops and even delivery logistics.

Taking verification one step further, Tattoo combines traceability with tokenization. Buyers can buy, and sellers can plug their products on the platform via tokens based on Ethereum’s nonfungible ERC-721 token standard.

While these solutions may tackle the issue of counterfeiting between merchants and retailers, there’s little in the way of stopping refilling once on the private market. According to Ernoult, there’s hardly anything blockchain can do in this regard. "One missing piece of the puzzle for blockchain in the use of liquor verification is another actor to secure the bottle and ensure that it hasn’t been opened and replaced with something else," she said.

Ven takes a pragmatic view, noting that no traceability system is without its flaws. “I don’t know about any safety system which couldn’t be subverted," he explained. The goal of blockchain-based traceability is to make adulteration more difficult and expensive so that it will be less profitable and, eventually, not worth the risk.

Similarly, while admitting that blockchain isn’t a panacea for countering counterfeiters, Nem’s Hodgson suggests that verification at least eases the issue: "There will always be ways to subvert verification systems. While blockchain is not a silver bullet solution for liquor fraud, it dramatically reduces the likelihood of it occurring."

However, Alastair Johnson, founder and CEO of self-sovereign payments and identification platform Nuggets, suggested an alternative: a mandatory Know Your Customer-centric app introduced within private purchases, a stage where arguably the most counterfeit refilling goes unimpeded. Johnson said:

"Through established verified identities for merchants, brokers, and consumers with blockchain tied to unique labels and seals, along with non-fungible tokens you could have an immutable record of provenance that could not only prove at point of purchase but at point of opening."

With KYC-verified customer ID coupled with blockchain’s immutable ledger, not only does the counterfeiter run the risk of capture, but subsequent resellers chance reputational damage. But sadly, blockchain didn’t exist some 8,000 years ago when wine is believed to have been first created. If it had, perhaps the issue of counterfeiting would never have arisen. Still, with modern practices in place and the use of blockchain verification techniques on the rise, the hope remains that counterfeiting numbers will reduce.