Charles Hoskinson laments Vitalik Buterin’s inability to engage in a meaningful discussion about Cardano, which in his opinion hurts Ethereum.

Charles Hoskinson does not know why his fellow Ethereum (ETH) co-founder Vitalik Buterin will not acknowledge the existence of Cardano (ADA) while speaking enthusiastically about other blockchain projects.

In a recent Cointelegraph interview, Hoskinson lamented Buterin ignoring Cardano. Hoskinson said that this ignorance of Cardano’s achievements hurts Ethereum, as everything that Cardano does is open source and could be borrowed by the rival. Ethereum has been plagued by delays in the development of its second generation proof-of-stake platform. When asked directly about about the crux of this tacit conflict, Hoskinson responded:

“I don't live in his mind, so I don't know why he never mentions our project. And, it's his decision not to do that. It’s just a detriment to his ecosystem because there's a lot of ideas in Cardano that could be very useful to Ethereum. And if the leaders of Ethereum decide to just have a blind spot for our project and just not ever reference our tech or our papers other than to criticize them, all they're doing is they're just preventing those ideas from providing value to them. We have no patents and everything's open source and Ethereum is larger than Vitalik.”

What is even more befuddling to Hoskinson is that Buterin is eager to discuss other projects like EOS (EOS) but even when prompted by community to talk about Cardano, Buterin, according to Hoskinson, avoids the topic:

“Because every now and then you see tweets like, ‘Hey, you know, EOS is an interesting project. Maybe Tezos, but are there any other projects that are interesting?’ And then the immediate follow-on was Vitalik describing Cardano as a project he would work on. When he was describing the features and capabilities and my own community started picking on him on Twitter and being like, you're literally describing what we're working on in Cardano. And of course, there's no engagement or even reply or acknowledgment that Cardano exists. That has to be purposeful.”

Hoskinson was also perplexed that the only time Buterin took time to discuss Cardano happened on Reddit and was not very productive. Yet Buterin eschews discussing Cardano in an academic medium. Hoskinson compared Buterin’s style of interaction with that of Elon Musk:

“He's got a big ecosystem. He's very young. He's learning how to be a CEO and he's just going to do things his own way. And you can't really argue with success. He's so far been very successful in that respect. So who knows? Maybe that's the new way to do business. I mean, Elon Musk certainly has a unique way of interacting with people, and it's worked pretty well for him.”

Finally, it happened, on May 22 (the interview was recorded on May 18) Buterin mentoned Cardano on Twitter: 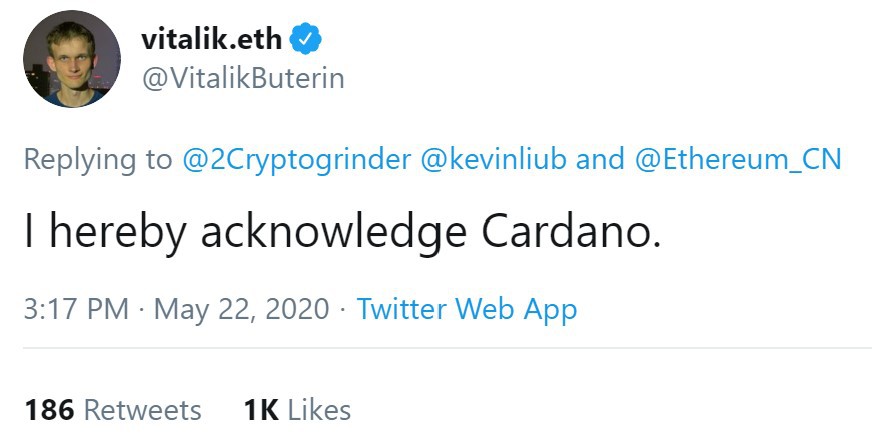 On the other hand, Buterin has discussed EOS and Tezos (XTZ) extensively.

The last personal interaction between the two Ethereum alums happened a couple of years ago, when Hoskinson wished Buterin a happy birthday over Skype. Maybe the answer to this hostility lies in the words of one of Hoskinson’s favorite poets, Lord Byron, for whose daughter Ada Loveplace Hoskinson named Cardano’s cryptocurrency:

“Is thy face like thy mother’s, my fair child!

Ada! sole daughter of my house and heart?”

Perhaps, Buterin cannot accept the fact Hoskinson left Ethereum to build a network of his own.