Traders say that the pattern that caused Bitcoin price to plunge from $10,500 to $3,600 could be playing out again.

The Bitcoin (BTC) price remains vulnerable to a pullback after ranging between $6,900 and $6,500 for the past four days. Traders say that the pattern that caused BTC to plunge from $10,500 to $3,600 is playing out again.

In the immediate-term, technical analysts foresee a retest of $7,200 after bullish divergences at lower times frames have indicated a relief rally to take place.

Bitcoin fractal suggests a severe correction, but not in the magnitude as early February

In mid-February, the Bitcoin price started to pull back when it hit $10,500 — a multi-year resistance dating back to early 2018.

According to the 1-day chart analysis shared by a trader who operates as TraderKoz, the Bitcoin price recorded a rebound, consolidation drop, and retest of local highs all in quick succession. 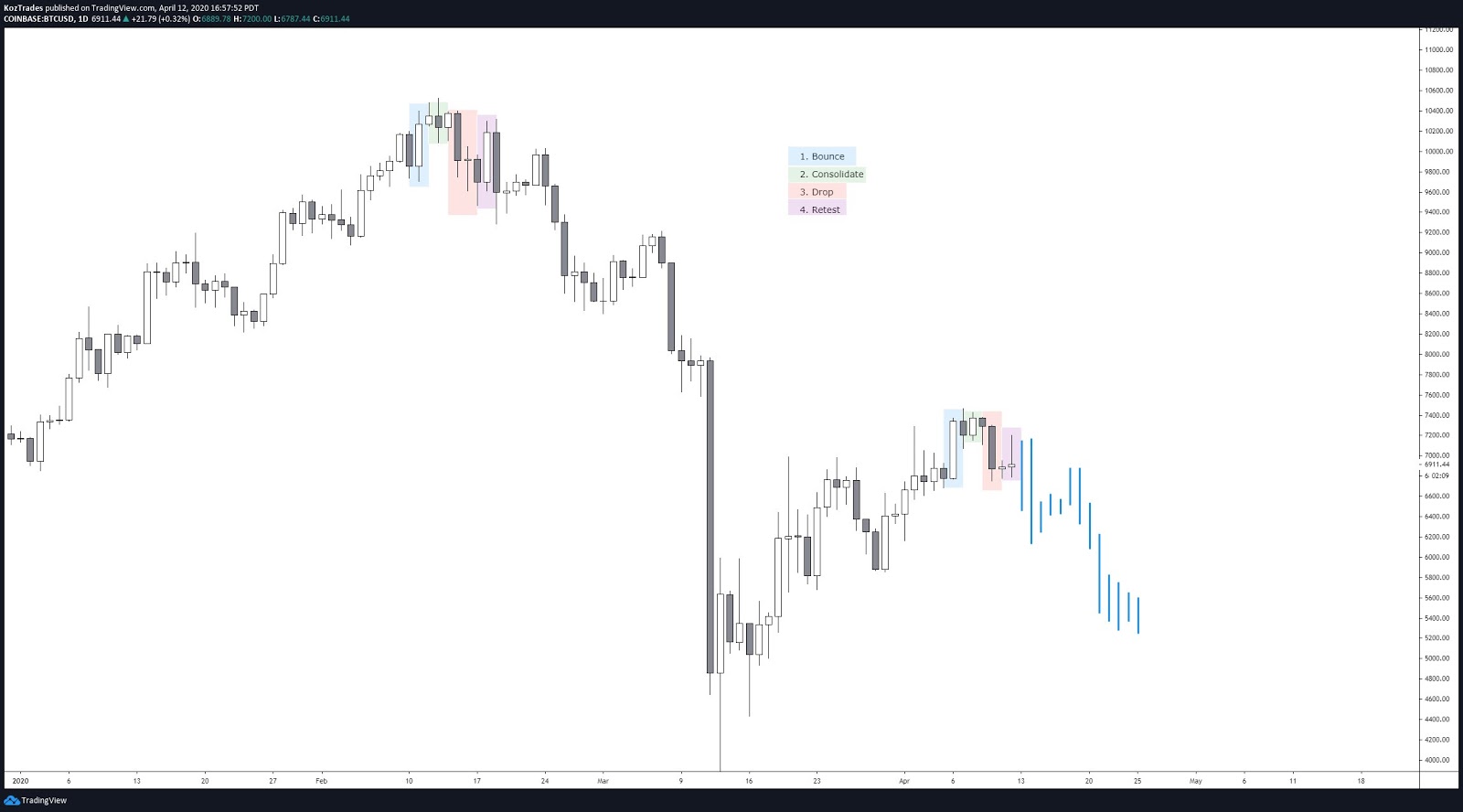 The rejection of the same resistance level twice in a short period of time led the Bitcoin price to drop from $10,500 to $8,500 rapidly, ultimately causing BTC to drop to as low as $3,600.

Traders remain divided on whether the technical structure of Bitcoin triggered its drop to the $3,000s or whether it was merely a black swan event resulting from intensified panic surrounding the coronavirus pandemic.

On Coinbase, for example, the Bitcoin price dropped to $3,850 and immediately rebounded to $4,860. The exchange seeing a significant increase in buy orders from retail investors 24 hours after the drop may indicate that Bitcoin should not have fallen to the $3,000s in the first place.

“Cascading liquidations were most prominent on BitMEX, which offers highly leveraged products. Amidst the selloff, a Bitcoin on BitMEX was trading well below that of other exchanges. It wasn’t until BitMEX went down for maintenance at peak volatility (citing a DDoS attack) that the cascading liquidations were paused, and the price promptly rebounded. When the dust settled, Bitcoin had briefly spiked below $4000 and was trading around the mid $5000s.”

Hence, even if the same fractal that occurred in mid-February plays out, it is entirely possible that the Bitcoin price does not see new lows and merely test lower support levels in the $4,200 to $5,300 range.

The price of gold has increased by 20 percent since March 23, demonstrating a level of volatility that is typically unseen with large traditional assets. 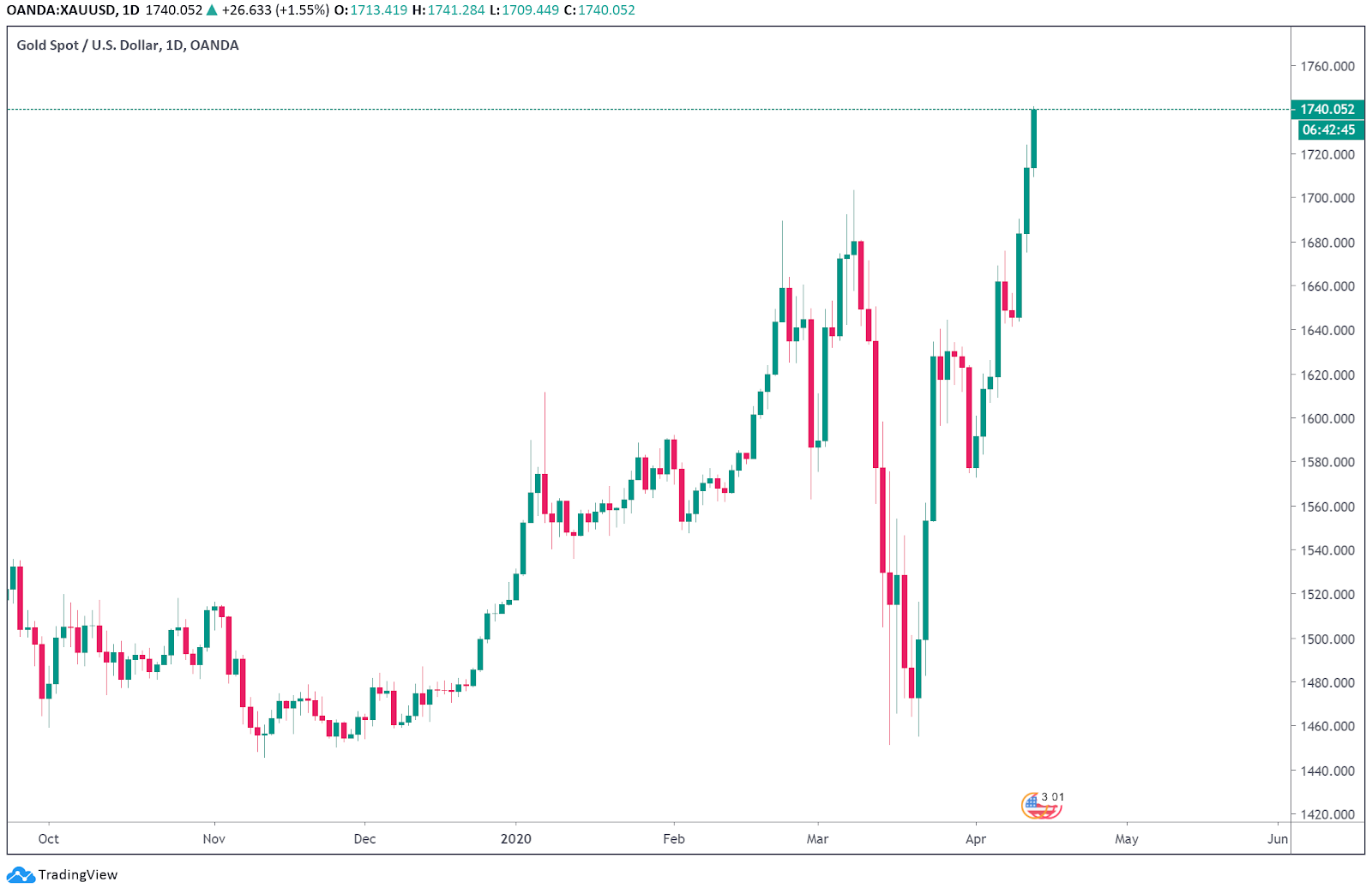 When the coronavirus outbreak was first reported in the U.S. and Europe, all asset classes tanked in tandem as investors — both retail and institutional — showed unprecedented levels of fear.

Once the initial storm passed, both Bitcoin and gold rebounded strongly, moving further away from local lows.

The upsurge of gold, which has surprised investors in the past week, could play as an unexpected variable for Bitcoin. With an increasing number of investors beginning to anticipate the block reward halving to trigger a short-term price spike for BTC, the case for an extreme correction is subsiding.