CME Bitcoin Futures Chart Posts Another Gap to Fill Near $8,900

Bitcoin’s weekend price action left another CME gap around $8,900 as the crypto asset continues to consolidate.

After a massive 42% price spike starting on Oct. 25, Bitcoin (BTC) looks like it has settled into a new range, at least for the time being.

Sitting near $9,460 at press time, the future looks brighter for Bitcoin compared to when its price floated around $7,500, as long as the asset can hold current levels and press forward.

Bitcoin, however, also posted another gap on the Chicago Mercantile Exchange’s (CME) BTC futures chart, indicating a possible drop ahead.

If Bitcoin’s price makes a big move while the CME market is closed, it can leave a gap in the candles on the charts. The coin has been known to travel back to these gaps, filling them with price activity eventually. 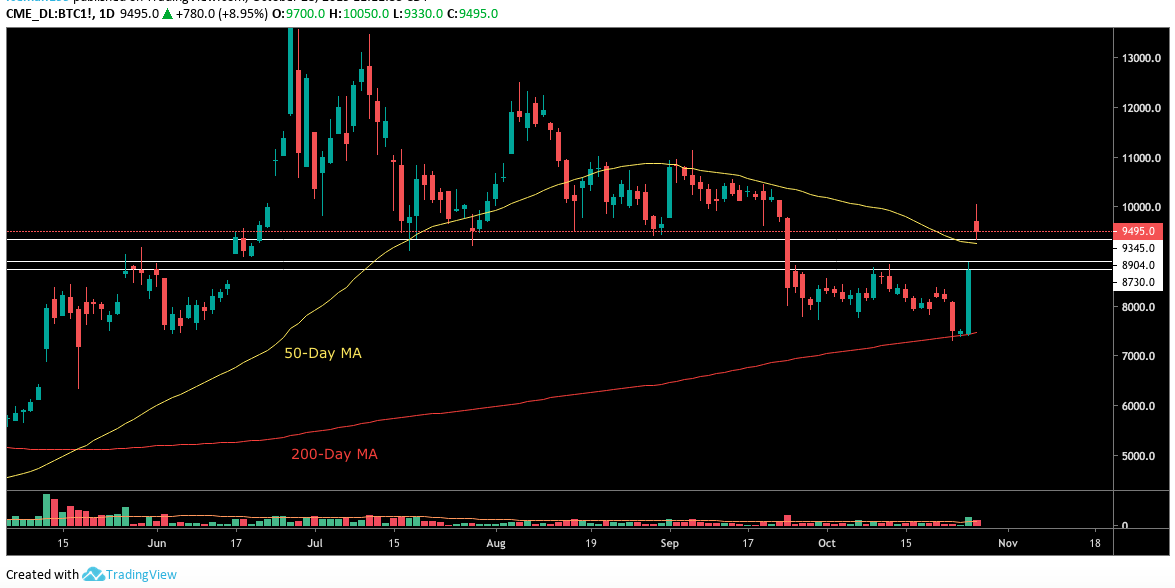 As shown on the CME futures chart, Bitcoin has a sizeable gap in price between $9,345 and $8,904, with the Oct. 25 candle body as low as $8,730. This level also lines up with resistance from the previous range, which could now serve as support, depending on if those levels hold.

Interestingly, the 200-day and 50-day moving averages (MA) are quite different on Bitcoin’s CME chart versus its other charts. The 200-day MA is commonly used in the crypto space as a metric for bullishness or bearishness, depending on where the price lies. This metric varies when taking into account market opening and closing times as they relate to CME and not the overall crypto space.

Bitcoin’s crypto exchange-based charts reveal the asset’s price to have spent significant time below the 200-day MA over the past several weeks, while the CME chart only shows the 200-day MA holding as support.

The BTC/USD pair at Coinbase shows vastly different data than its CME price action. After multiple weeks of rejection from the 200-day MA, the digital asset finally has closed two consecutive daily candles above the indicator.

The 50-day MA also recently crossed under the 200-day MA, posting a death cross, a common significant indication of potential future bearish price action. Bitcoin’s recent pump, however, appears to have had an opposite reaction, pumping instead of dumping.

These two averages also were not even close to each other on the CME’s daily chart, leading one to question whether the market is perhaps actually reacting more on CME’s Bitcoin futures trading than it is on normal crypto market trading.

Bitcoin finished off its dramatic move on its Oct. 26 candle, which closed with a giant upside wick, reaching a price point of $10,550. This could now hold as a point of future profit-taking.

Bitcoin’s 4-hour chart reveals an almost perfect touch of the 0.5 Fibonacci retracement level near $8,933, indicating a healthy correction of last week’s impulsive upward move. The 0.236 level now also seems to hold as resistance, with two wicks probing above the level before facing rejection.

The digital asset presently has a new trading range largely comprised of price action between $9,800 and $9,013. Range high and range low levels also faced wicks poking through them, possibly tapping into liquidity as fuel to push the price in the opposite direction, circled on the chart above.

The Williams fractals on the chart, shown via green and red arrows, currently indicate bullish structure, especially if Bitcoin forms a higher low since its recent correction below $9,000 to the 0.5 Fibonacci level. A downward break of the fractal at $8,930 would break market structure, turning price action sideways or potentially bearish.

Bitcoin’s Oct. 25 candle saw a fairly harsh rejection at $10,550, leaving that day’s candle with a large upside wick. Historically, that is not usually the most bullish type of candle close, although it makes sense due to the meteoric price rise preceding it.

Bitcoin also has not had much of a correction on the daily chart quite yet. Lower prices would be logical if this is the end of a wave up.

Additionally, many of the gaps on the CME Bitcoin futures chart have filled in the past, making the case for a move back down below $9,000. If bullish sentiment does not pick up again, crypto’s largest asset could possibly get swept back into its previous range, drifting lower once again.

On the bullish side of the table, Bitcoin is letting the dust settle after one of its largest 24-hour price rises in history, which truly is an amazing feat considering the digital asset’s price history.

The coin also appears to be in a consolidation pattern after a bold move. Normally, in many cases, another move up would follow. The asset’s price is decisively above the 200-day MA, and the CME gap is not really much lower than current prices.

Logically, if Bitcoin moves back down to the CME gap, the drop may not be large enough to scare people out of their positivity.