Bitcoin price is under threat as an impending death cross on key moving averages decreases the likelihood of a rally to $8.8K.

Bitcoin price (BTC) is down around 1% on Monday, following a strong close to the week on Sunday with a move from lows of $7,875 to highs of over $8,300. The altcoins also bounced around 2% yesterday and have also failed to follow through today.

Despite the strong close to the week, Bitcoin closed the week down around half a percent and the altcoins a similar amount. With an encouraging bounce in the twelfth hour, we examine what this may mean going into the week and if the updraft in the price action is likely to continue. 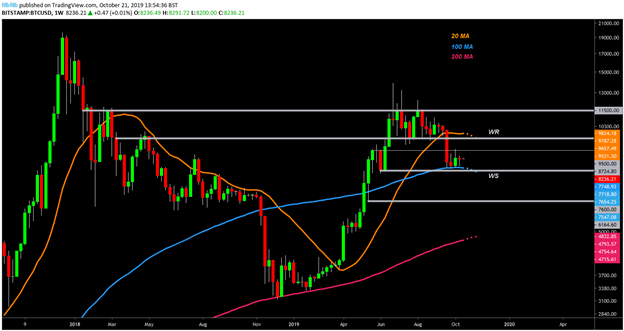 Bitcoin continues to trade below the 20-week moving average (WMA), while supported by the 100-WMA and the previous weekly support. The 100-WMA will rapidly begin its decline next week and Bitcoin shows limited interest in retesting key prior support of $9,500 at this point.

The weekly Moving Average Confluence Divergence (MACD) continues to trend down, as does the Relative Strength Index (RSI). The MACD histogram is showing signs of a higher low and the RSI is testing the downtrend. This implies that Bitcoin, although in a downtrend, could be in for an attempt to change that somewhat going into the final ten days of October. 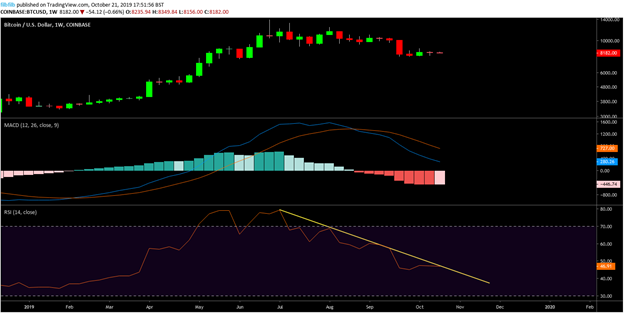 A close above $8,305 would mean avoiding a fourth consecutive monthly red candle, which has never occurred previously in a bull market and would be a relief for the bulls. 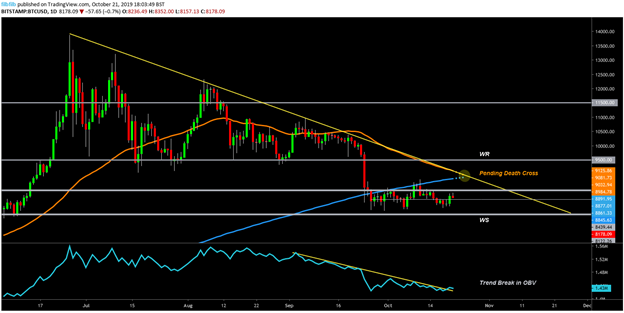 The daily Bitcoin chart shows that the digital asset has an impending death cross of the 200-week and 50-week moving averages. As the name would suggest, this implies that Bitcoin will be likely to suffer more downside, although death and golden crosses are more useful on the weekly chart. The death cross is occurring at the descending multi-month resistance adding weight to the idea that Bitcoin is up against bearish momentum.

Historically, the daily death crosses have been met with a rally into the cross, contrary to the market sentiment at the time; but typically following the rally there has been a continuation of the downtrend.

The On Balance Volume indicator (OBV) adds or subtracts current volume to the previous OBV depending upon the price increasing or decreasing. Currently, the indicator shows that there are some encouraging signs, in that the recent downtrend has subsided somewhat. This could add weight to the idea that there could be some sort of rally this week off the back of Sunday’s close.

Looking at the order books, it is clear on face value that buying interest outweighs selling interest within 10 percent of the price range. Traders also might have witnessed a shrinking of around 25% off the books on the sell-side on a number of larger exchanges between the start and end of last week.

Although this merely tells part of the story, it does imply that there is a chance the bulls may take back control of the market in the short-term.

If the bears are to take hold of the market after the death cross, the next area of buying interest is likely to be the low $6,000s, which saw a significant market reaction earlier in the year and acted as confirmation that continuation was necessary.

Should a breakdown to these levels occur, the descending resistance would suggest that prices would likely be capped in a lower range for the remainder of the year unless there was a similar reaction to May 2019, coupled with follow-through to retest $9.5K, which at this stage looks unlikely.

The 4-hour chart illustrates the strength of the bounce on Sunday. It’s clear to see that Bitcoin has put in a second higher low following a second higher high. This is supported by buying pressure as seen in the OBV, which is a bullish indicator on low timeframes.

Despite there being an obvious trading range of $7,700 to $8,400, there is also an argument that the higher highs held back by the 200-day moving average (DMA). A broadening wedge would support the idea of a test of $8,800 sometime this week. 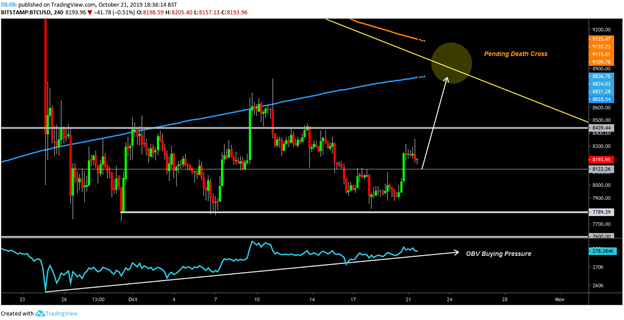 The CME did open Sunday with a gap to the upside. Typically these gaps have been filled relatively quickly in the past. At the moment, Bitcoin price is retracing and it is quite possible that traders are looking to push prices down to the low $8,000s. This will potentially be seen as a buying opportunity for the reasons mentioned above. 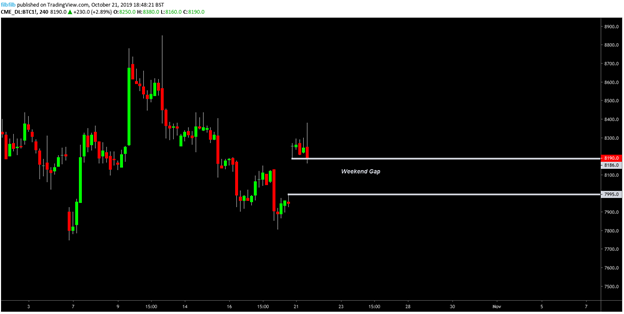 The bulls must break the descending resistance that has held back the price for months to make the first step towards breaking out of the downtrend. At this moment with the looming death cross, it is seemingly unlikely and thus price action favors the bears.