Crypto derivatives monthly volume hit a new all-time high of $602 billion in May.

The crypto derivatives monthly volume increased by one third in May to hit a new all-time high of $602 billion, according to United Kingdom-based data aggregator CryptoCompare.

The new record is just a shade past the previous one of $600 billion, registered in March. However, derivatives are becoming ever more popular and now account for 32% of the crypto market — up from 27% in April. In percentage terms, the monthly volume increase in May for derivatives was six times larger than the increase in spot volumes, which was up 5% to $1.27 trillion.

Huobi, OKEx and Binance accounted for about 80% of May’s derivatives volume combined. In percentage terms, CME saw the largest monthly increase of 59%, though its $7.2 billion in volume was dwarfed by market leader Huobi — posting a 29% monthly gain in volume with $176 billion. 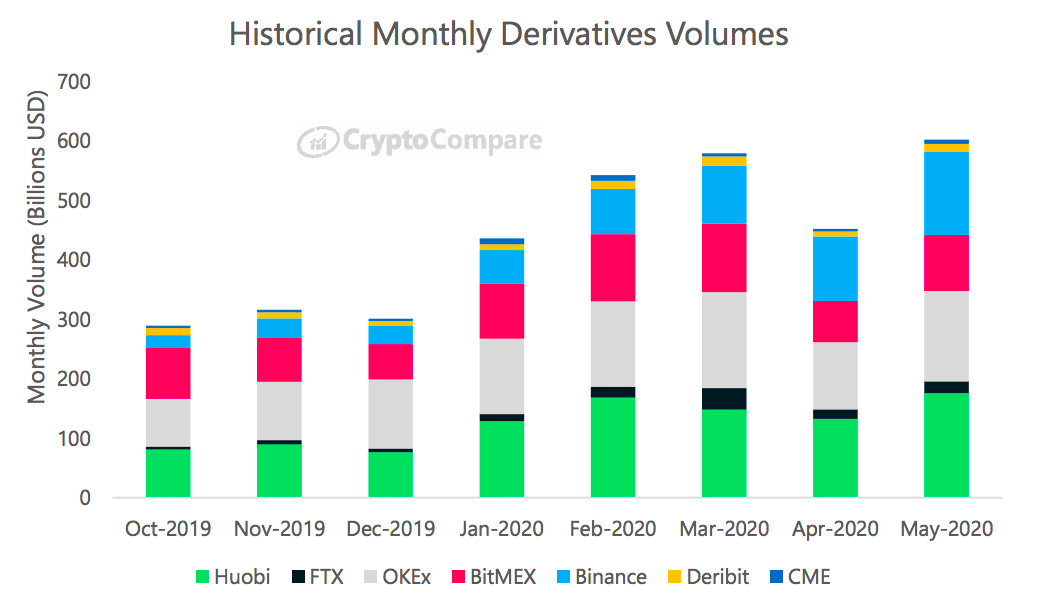 Institutional options volumes on the regulated platform CME also hit record levels in May — increasing by a massive 16 times from April’s figures to a new monthly high of 5,996 contracts traded. The platform also broke a new daily record on May 28, with CME trading 1,418 Bitcoin options contracts. Derebit’s options volume more than doubled in May to $3.06 billion.

There can be only one

CryptoCompare’s report highlighted some noteworthy shifts in the world of stablecoins, with USDC and PAX both seeing massive declines in volume against BTC — with USDC down 78% this month while PAX lost 97%. USDT represents the overwhelming majority of stablecoin to BTC trading with 98%.

The biggest day of the month, as one might expect, was the eve of the Bitcoin Halving, on May 10, which saw a huge spike in spot trading volumes to $64.7 billion. To put that into context, it’s just under the top trading day in April ($66.2 billion) and considerably less than Black Thursday in March ($75.9 billion).