A crypto exchange has renewed its sponsorship deal with a football team, as it sets its sights on expanding into the United States. 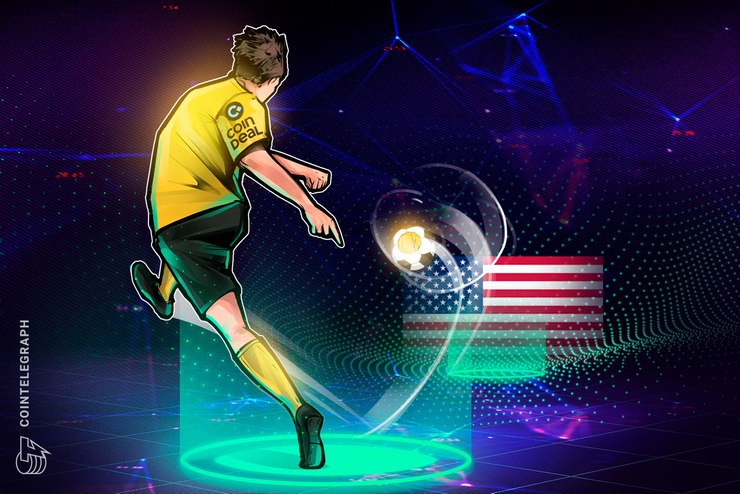 A crypto exchange has announced that it has renewed its sponsorship of an English Premier League football team for the second season running.

CoinDeal says the extension of its deal with Wolverhampton Wanderers gives the company the chance to get its brand in front of football fans around the world. With its logo proudly displayed on the team’s kit, the company estimates that its branding appeared on more than 350 million TV screens from June 2018 to April 2019.

The collaboration has also extended to advertising that highlights CoinDeal’s “fast verification procedures, security, multiple payment methods and top-flight support team.” One 40-second spot features some of the Wolves’ best-known players, and the promotion has attracted more than 1 million views since it made its debut on the exchange’s YouTube channel back in February.

CoinDeal says this partnership has long been about more than raising publicity for the crypto industry and driving mainstream adoption. According to the company, the sponsorship opportunity has forged new friendships and given its staff a newfound passion for football — so much so that the team regularly cheered on the Wolves throughout their Premier League campaign as they rubbed shoulders with the likes of Arsenal, Chelsea, Manchester United and Liverpool.

“After an amazing season, we really made it our priority to come back for this season to be once again, global partners of the Wolves. We feel that this partnership has been incredibly beneficial to both sides involved, we truly feel like family here.

“There’s nothing better than game day in Wolverhampton — we try to be there as often as we can, regardless, we always make sure to cheer on and follow all games even in the office.”

CoinDeal says it has become the largest crypto-fiat exchange in Europe since launching back in March 2018, but isn’t content sitting still. Now, the company is setting its sights on the United States.

To begin with, CoinDeal plans to be available in 14 states — Indiana, New Jersey, Pennsylvania, Texas and Virginia among them — with another 12 to follow in quick succession. The company believes its footprint in the U.S. will expand to 40 states by next year, once all of the necessary licenses have been acquired.

Explaining its motivation for going global, the exchange says it is keen to capitalize on statistics that suggest 40% of the U.S. population are open to the idea of cryptocurrency. Right now, CoinDeal claims that many existing exchanges are failing to meet the expectations of consumers — and the team believes there is an unparalleled, untapped potential of liquidity and potential traders who can benefit from their cutting-edge infrastructure.

Alex Strześniewski, the exchange’s business development director, said, “The US is the land of opportunity, and this may very well be the defining moment in our company's history.”

CoinDeal says that it offers its user base more than 40 cryptocurrency pairs — bringing together Bitcoin, Ethereum and Litecoin with major fiat currencies including the euro, dollar, British pound, Polish zloty and Russian ruble. One intuitive feature enables the community to vote on which coins and tokens should be added next, and the company says this gesture enables everyone to take part in the growth of its trading platform.

To coincide with its stateside launch, CoinDeal has also unveiled the debut of a new utility token known as CDL. The company claims this token delivers higher liquidity, a greater number of trading pairs and the opportunity to benefit from lower trading costs.