According to a recent report by crypto research firm Diar, bitcoin’s mining hashrate is becoming more distributed among mining pools.

The bitcoin (BTC) mining hashrate is becoming more distributed among mining pools, according to a report published by cryptocurrency research firm Diar on May 13.

Per the report, smaller mining pools have made significant gains this year as unknown miners either drop off or change pools. 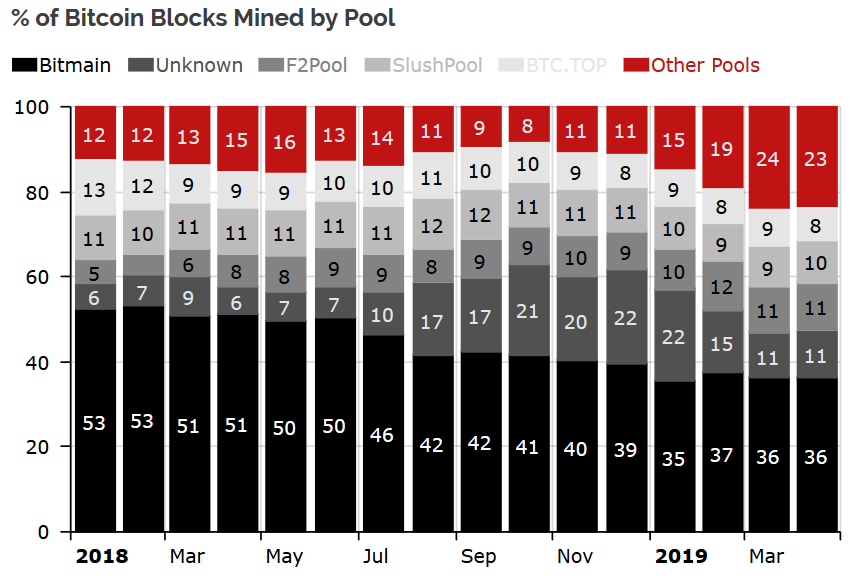 Unknown bitcoin miners had reportedly gone from solving 6% of the blocks at the start of last year to 22% by the end of 2018.

However, the report claims that this trend has now reversed, as smaller pools have now solved between 23% and 24% blocks in the past two months, double the percentage reported last year. Diar explains that while such distribution has its advantages, also another trend is manifesting itself:

“While the distribution of hash power is certainly better geared against coordinated attacks, the number of pools continue to dwindle. To date, versus the start of 2018, 40% of the pools have now shut down.”

As Diar wrote a week ago, the average bitcoin transaction fees increased by nearly 200% in April compared to March.

At the end of May, Cointelegraph reported Chinese cryptocurrency mining giant Bitmain's hashrate has noticeably dropped in a month.