Ethereum Surpasses $1,000 For the First Time, Factors Behind Increase

The recent surge in Ether price can be largely attributed to two main factors: the abrupt surge in the value of Ripple and the rising user activity of DApps.

If decentralized app browsers become adopted at a larger scale and the Ethereum network scales, analysts like Novogratz see Ether price surging from its current level. 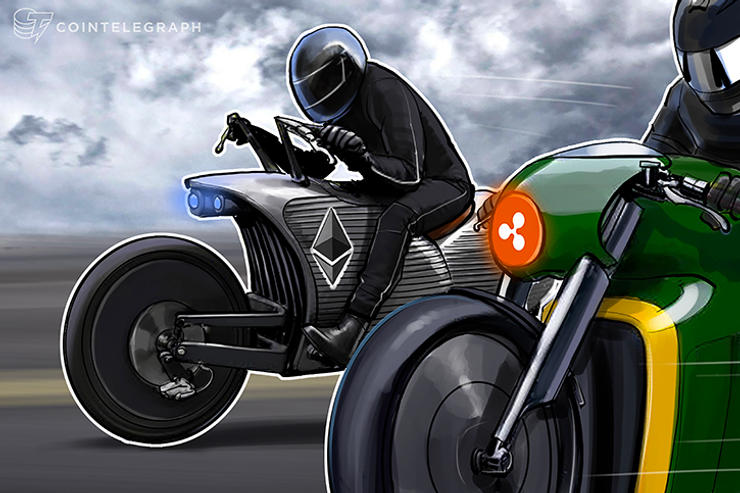 The recent surge in Ether price and the market valuation of the Ethereum Blockchain network can be largely attributed to two main factors: the abrupt surge in the value of Ripple (XRP) and the rising user activity of decentralized applications.

In late December of 2017, Ripple overtook Ethereum for the first time in history, becoming the third alternative cryptocurrency with the exception of Ether and Bitcoin Cash to become the second largest cryptocurrency in the global market behind Bitcoin.

As Cointelegraph previously reported, the South Korean cryptocurrency exchange market, which has accounted for nearly 50 percent of global Ripple trades over the past week, pushed the market valuation of Ripple from $40 bln to $120 bln within less than a month.

The recent rally of Ethereum can be seen as its highly anticipated long overdue recovery and the early signs of competition against Ripple. Merely two days ago, Ripple became the first alternative cryptocurrency to surpass the $100 bln mark. Yesterday, on Jan. 4, the Ethereum network achieved a $100 bln market cap as well.

Can the valuation of Ethereum be justified?

Charlie Lee, former Coinbase executive and Litecoin creator, noted that transaction volume and user activity are important factors investors must consider in analyzing the performance and future trend of cryptocurrencies. In the two categories, Ethereum is in an optimal position to surge in value.

As you can see, Litecoin is doing very well in terms of growth in usage. This chart shows the growth in the past year compared to other coins.

Let's not let price distract us from what's actually important. This is what I mean by conflict of interest. No LTC, no distraction. pic.twitter.com/uYHNshho5s

In consideration of the two above mentioned categories, billionaire investor Mike Novogratz, who has been an active advocate of cryptocurrencies and long-term investor, stated that Ethern price has the potential to increase by threefold by the end of 2018.

"Ethereum, which I think just touched $500 or is getting close, could be triple where it is as well.”

“To imagine the current structure of Ethereum’s decentralized application market, one has to consider the mobile app era prior to the existence of Google Play Store and Apple App Store. At that time, users had to download apps from websites directly from the distributors and developers.”

If decentralized app browsers become adopted at a larger scale and the Ethereum network scales, analysts like Novogratz see Ether price surging from its current level.