A second transaction has been confirmed on the Ethereum blockchain with a $2.6 million gas fee, confusing the crypto community. 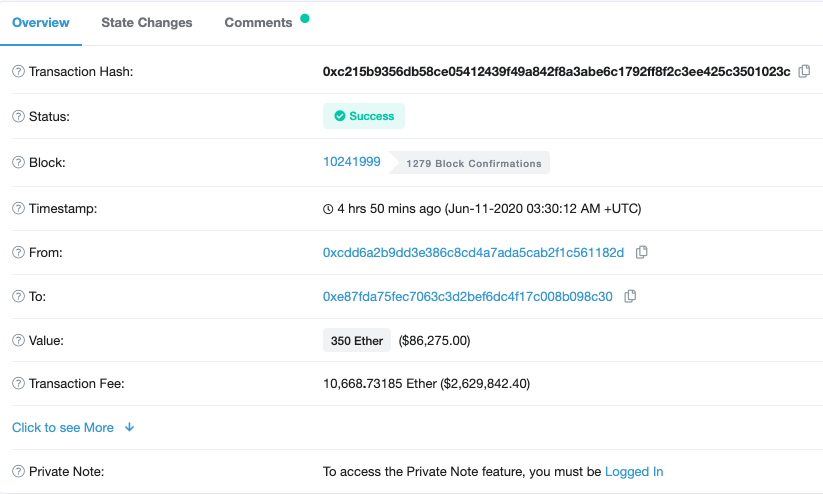 These mysterious transactions have stumped the wider community with some suggesting money laundering or revenge from a disgruntled exchange employee.

Both transactions originate from the same address, but the blocks were mined by separate miners, which reduces the possibility that the transactions are a means of laundering money or avoiding tax.

This transaction went to Bitfly’s Ethermine ETH pool, which promptly took to Twitter in an attempt to reach out to the sender:

Today our Ethermine ETH pool mined a transaction with a ~10.000 ETH fee (https://t.co/B5gRWOrcPf). We believe that this was an accident and in order to resolve this issue the tx sender should contact us at via DM or our support portal at https://t.co/JgwX4tGYr4 immediately! pic.twitter.com/sWxVRx5muv

The Bitfly team have said they will work with the sender to resolve the issue as they believe it was a mistake.

Ethereum co-founder Vitalik Buterin said that a protocol upgrade, which would reduce the need for manual fee setting, should reduce the probability of these problems occurring in the future:

“Definitely a mistake. I’m expecting EIP 1559 to greatly reduce the rate of things like this happening by reducing the need for users to try to set fees manually.”

Adding to the mystery, one Twitter user mentioned that the transaction wasn’t broadcast in the same fashion normal Ether transactions are, however this is yet to be confirmed.

This second transaction was sent to a different address than the first and besides two transactions around 5 ETH, each 45 days ago, the receiving address has not been used. The 350 ETH are still in the wallet at time of press.