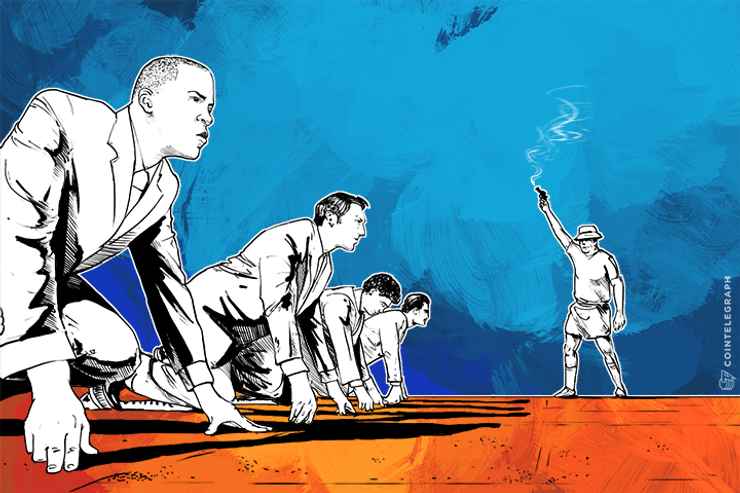 Offering users the chance to trade international markets whilst using their Bitcoins as collateral against these positions, First Global Credit is encouraging new sign ups with a new trading competition boasting a 20 BTC funded trading account as its main prize.

Competitors taking part in the contest will be using a “paper” account with 100 BTC of competition money loaded on it, as they try their hands at  international market day-trading. Usually seen as quite an intimidating market to be in, FGC is hoping the low stakes of this paper account will encourage more people to get involved in this “Wolf of Wall Street” style trading environment.

The regular service at FGC allows their users to trade the same 50 or so international markets represented on the platform without actually selling their Bitcoins to do so.

“This is the second time we have run this competition and the first competition had an awesome response. In the office we had great fun watching people’s different trading styles and we started routing for the plucky individuals that really put thought and effort into their strategies.

There is a lot of different things people can trade and they can go long or short. I’ve had a lot of excitement from guys about the Porsche Boxster which they can ask for at Level 11, after the winner has traded for a while. I live in fear that the winner will be a 10 year old kid. But we do clearly say on the website that part of the arrangement is subject to legal limitations!”

Using the Bitcoin funds as collateral allows the user to both gain 5 times leverage on the “trading floor”, and also means that rises in the value of Bitcoin itself are still beneficial to their holdings. Conventional trading services where Bitcoins are sold in exchange for market positions would not see this advantage.

Terman explained further how the competition panned out last time they ran it.

“Well we had 100’s competing last time around and I think CT readers will be keen to play so you are going to have to really think and actively play to win. But I would definitely say, DON’T GIVE UP! Some people seem to have a few trades go against them and stop trading. But that is the thing about being a trader is we are tough and persevere! And hey if you get something wrong, as long as you learn from it, then you did get something out of the experience. There are ALWAYS opportunities in the markets.”

We've got more details about the competition over on our regular competition page, so take a look for more information on how to sign up and get involved with your chance to win that 20  BTC funded trading account.

Related News
Top Staking Projects of the Crypto World Today: Report
Mobile App Promises Easier, Better Crypto Options Trading Experience
Foin Token Scheme Locks Up Investors’ Money and Pumps Price
Experienced Traders Prefer to Trade on Desktop Computers, New Study Reveals
CME’s Options on Bitcoin Futures Pass Regulatory Approval and Go Live
Bitcoin Options, Explained
<div is="sidebar" :sidebar-data="{"promoButtonsI18n":{"crypto-button":{"url":"crypto.btn.sidebar.url","label":"Get Crypto At True Cost\n","text":"Cryptoassets are complex instruments and investments carry a high risk of losing value. You should educate yourself in how crypto-markets work before making any investments. Always invest responsibly and be prepared for the risks associated with investing in or using cryptoassets. This promotion cannot be considered investment advice."},"etoro-button":{"url":"https:\/\/ad.doubleclick.net\/ddm\/clk\/437480595;240556498;x","label":"Try Etoro","text":"Trade on the world’s leading social trading platform (Highly volatile investment product. Your capital is at risk)"},"hitbtc-button":{"url":"https:\/\/hitbtc.com\/?ref_id=5cba0be404aa3","label":"BEST LIQUIDITY ON HITBTC","text":"Note that all trading strategies are to be used at your own risk. Before trading, we recommend to make sure that you have a clear understanding of cryptocurrencies and how they are traded."},"changelly-button":{"url":"https:\/\/changelly.com?utm_source=cointelegraph&utm_medium=referral&utm_campaign=changellyctengbutton&ref_id=le9ssi8dgmskmqu0","label":"BEST RATES ON CHANGELLY","text":&