Hodler’s Digest: the Great Tether ‘Unpegging’ and Wozniak Gets Into Blockchain

Investment giant Fidelity is turning to digital assets services, and Steve Wozniak gets into blockchain.

U.S. investment firm Fidelity has launched a digital assets service targeting institutional clients this week. The new company, Fidelity Digital Asset Services, will offer custody and trade execution services for digital assets, looking towards hedge funds, family offices, and market intermediaries as clients. In the announcement of the new company, Fidelity noted that “70 percent” of institutional finance executives believe crypto will have a role in the future of the financial sector, yet many are still “sitting on the sidelines” before they enter the market.

Galaxy Digital’s Mike Novogratz said this week that if institutional investors enter the crypto space in quarter one or two of 2019, then the markets will see “new highs.” However, Novogratz added that he no longer thinks that Bitcoin will break $10,000 in 2018, going back on an earlier prediction. In Novogratz’s opinion, institutional investor participation in crypto, like Fidelity’s recent announcement, needs more testing in order to attain mass interest based on investor trust.

International cryptocurrency exchange Binance has launched its first fiat-to-crypto exchange in Uganda this week. According to their press release, the new branch will start accepting deposits and withdrawals of Ugandan shillings, and has already begun its know-your-customer procedures. According to Binance’s CFO, the foray into Uganda will help to maintain sustainable economic stability in Africa and bring innovation to the region.

This week, controversial stablecoin Tether lost its peg to the USD, falling as low as $0.96 cents. The drop in price comes amid rumors the connected crypto exchange Bitfinex was facing banking issues, claims that the exchange denied. As well, rumors circulated that major crypto exchange Binance was set to delist Tether, but those reports were also refuted. Tether losing its dollar peg led to a pronounced effect on Bitcoin prices on Bitfinex, causing BTC to list at a premium.

“Bitcoin could go to the moon or zero, I'm not going to make a penny either way because I'm neither short or long,” — Nouriel Roubini, New York-based economist that predicted the 2008 financial crash

“[The government officials] literally have secret undercover government agents going on LocalBitcoins, trying to buy Bitcoins from people. And when they sell them the Bitcoins, they arrest the people and toss them in jail for years. This is madness! And this needs to [be] stopped,” — Roger Ver, “Bitcoin Jesus”

The chairman of Hong Kong’s securities and futures commission is planning to introduce regulation in the crypto sphere in order to protect investors, according to an interview he gave this week. Chairman Carlson Tong Ka-shing, who will soon leave this post, said that Hong Kong is not considering a crypto ban, but thinks that more regulation could help the industry. The chairman also noted that they would consider treating crypto platforms as traders, rather than securities.

Steve Wozniak, the co-founder of Apple, has announced that he is the co-founder of a recently launched blockchain-focused venture capital fund EQUI Global this week. Wozniak, who had said in August that he planned to become “involved” in a blockchain project, noted that he gets “dozens” of offers daily, and that this is the second time he has joined a project in about twenty years. EQUI Global plans to enable non-institutional investments, as well as allowing investors to trade on external crypto exchanges via EquiTokens.

Telegram, an encrypted messenger service, plans to test a version of its blockchain-based TON platform “this autumn,” according to investors. Unnamed investors told a Russian media outlet that a circular had been sent to participants in TON’s Initial Coin Offering at the beginning of September, saying that the blockchain component of the platform was under development, with 70 percent of the product already finished.

Kenya’s government is planning to use blockchain technology to manage a government housing project of 500,000 units to be built by 2020. Within the affordable housing program, the government will assist contributors learning less than 100,000 Kenyan shillings ($992). Blockchain tech will be used to make sure there is a proper distribution to deserving inhabitants in the program, and prevent fraud from legislators and beneficiaries.

Genesis Global Trading, an institutional cryptocurrency over-the-counter broker, said this week that its loans spin-off has processed over half a billion dollars in its first six months. The loans company, which started its digital asset lending activities in March, reported that its current order book has $130 million in outstanding loans, and that the total cash flow reached $553 million for all supported assets. The firm also noted that altcoins like Litecoin, Ripple, Ethereum Classic, and Bitcoin Cash drew high demand.

Major U.S. crypto exchange and wallet Coinbase has opened trading for 0x (ZRX), making it the first ERC-20 token to be traded on the platform. Coinbase noted that the token is also available on Coinbase Pro, but that trading will only be allowed once enough liquidity is established. Currently, Coinbase customers can trade with ZRX on Coinbase’s websites and its iOS and Android apps; however, it is not available initially for residents of New York and the U.K.

This week, the deputy director of the Bill and Melinda Gates Foundation announced a partnership with Ripple Labs Inc. and digital payments firm Coil in order to implement the Interledger Protocol, which aims to speed up cross-border transfers. The partnership will also develop ways that Moojaloop, an open-source mobile payment platform for the developing and unbanked world, can support “pro-poor payment systems.”

Decentralized Internet project TRON and China’s “Google” Baidu will cooperate on cloud computing resources, according to a tweet from TRON. The tweet confirms several unofficial reports that had circulated online about the cloud service provision cooperation between the two companies. Some crypto commentators have taken issue with the classification of the cooperation as a partnership, noting that it is one company just using another’s resources.

Crypto compliance provider and research firm Chainalysis has partnered with crypto exchange Binance in order to lend support for detecting suspicious transactions. Binance, which is currently the world’s largest exchange by volume, needs to company with each jurisdiction’s AML and KYC rules, which differ by area. According to Chainalysis, real-time monitoring to track the provenance of each transaction made on Binance’s platform, a solution known as know-your-transaction, will help detect fraudulent transactions.

U.S. banking firm Goldman Sachs and Mike Novogratz, CEO of crypto investment firm Galaxy Digital, have invested $15 million in U.S. crypto custody service BitGo. In total, BitGo has raised $58.5 million in its series B funding round, having raised a total of $70 million in all of its fundraising rounds. In September, the company received a state trust company charter from the South Dakota Division of Banking, making it a qualified custodian for crypto. 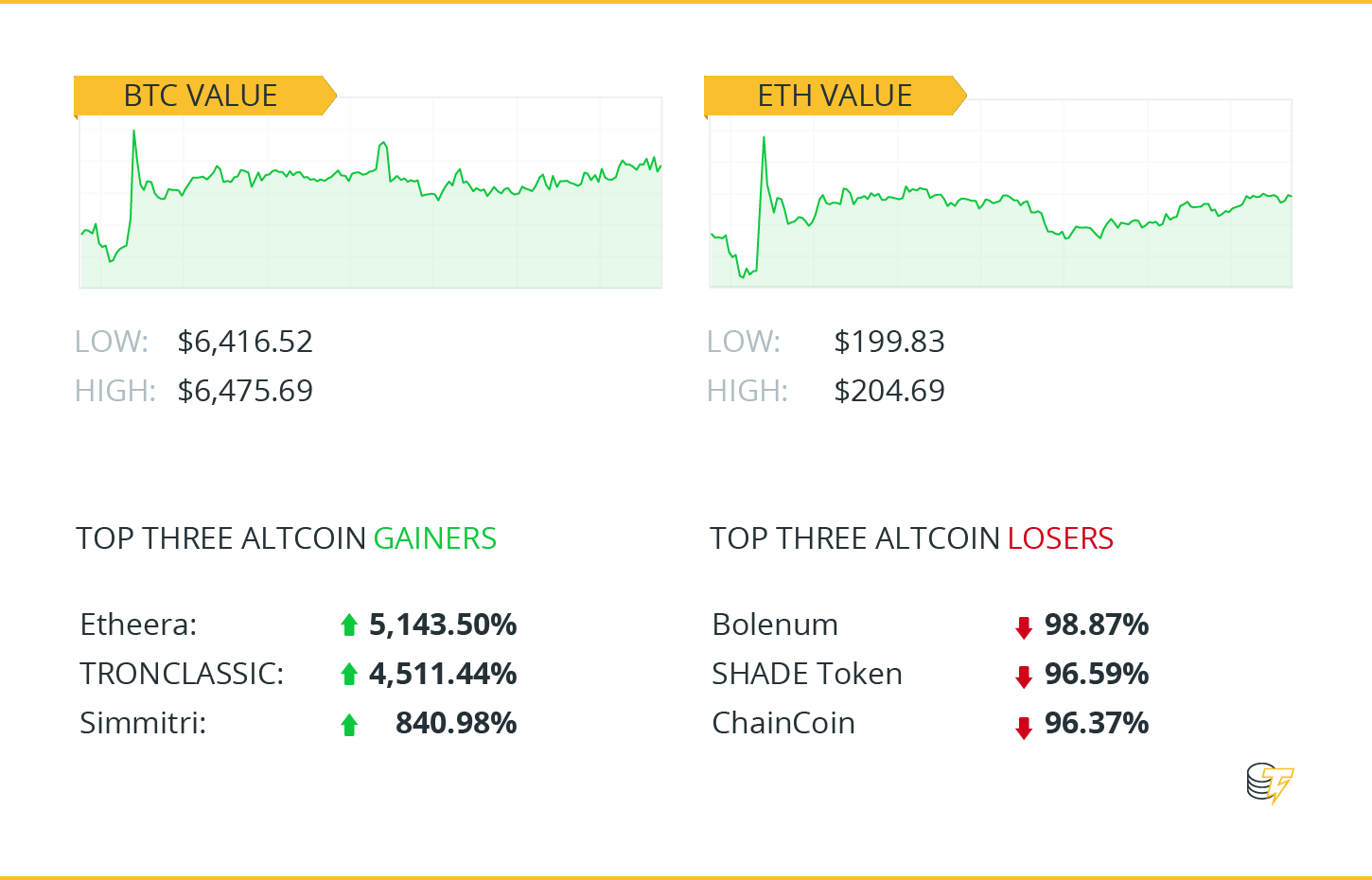 The crypto markets are seeing relatively stability this week, with Bitcoin trading at $6,545, Ethereum at $207, and the total market cap at $211 billion.

A reported “consensus issue” in the testing of a planned hard fork of Ethereum called Constantinople has allegedly caused a testnet to become “not usable,” leading to ETH core developers to delay the hard fork until January 2019. In the most recent ETH core developers call, a decision had been made that Constantinople would not be activated if there were problems on the Ropsten testnet. Constantinople had first been trialed on the Ethereum public testnet Ropsten on Oct. 13, with plans to be activated by the end of October-November of this year.

Payment companies MasterCard and Visa will reportedly soon group crypto and ICO jurisdictions into a new “high risk” category, along with binary options, CFDs, and forex. The new classification, which will go into effect for MasterCard in October and Visa in December, according to the report, means that the group will be subject to additional monitoring. According to Finance Magnates, the new classification also means that chargebacks could now be executed up to 540 days after the original date of the transaction.

Elvira Nabiullina, the head of Russia’s central bank, said this week that “crypto fever” is beginning to diminish. While speaking at a finance innovation forum, Nabiullina said that she believes crypto and blockchain are now being treated more rationally. She also noted that more entrepreneurs are looking to implement blockchain in their business, especially using Initial Coin Offerings, which she called a “perfect method to raise funds.”

A new report by Big Four auditor Ernst and Young has found that ICOs that raised capital in 2017 are doing poorly one year later. According to the report, which analyzes 141 of the “top” ICOs that represent 87 of the total ICO funding in 2017, 86 percent of the projects are now trading below their listing price, and 30 percent have lost “substantial” value.” Ernst and Young also noted that 71 percent had “no offering in the market at all.”

Crypto hedge fund Gelfman Blueprint, Inc. (GBI) and its CEO Nicholas Gelfman have been ordered to pay $2.5 million in fines by a New York federal court for operating a Ponzi scheme. The fine is a continuation of the original action taken against the company by the CFTC in September 2017, when the regulator charged the company and its CEO with running a fraudulent scheme that promised high returns. In total, GBI and Gelfman fraudulently solicited more than $600,000 from over 80 customers, leading to an eventual loss of almost all funds.

Joey Krug, the co-CIO of blockchain investment firm and hedge fund Pantera Capital, said this week that he sees crypto markets increasing tenfold in 2020. In an interview, Krug noted that scalability improvements for Bitcoin were essential in order to prompt a shift in this year’s decreasing market prices.

Colleges Are Baffled By Bitcoin Donations

Bloomberg dives into the tricky area for colleges which are accepting cryptocurrency donations, and what they do with them when they get it. Starting with Blockchain co-founder Nicolas Cary’s $10,000 Bitcoin donation to the University of Puget Sound, colleges are currently grappling with the idea of crypto, as well as the technicalities of setting up crypto wallets, in order to accept donations from some of their more tech-savvy alumni.

The Prophets Of Cryptocurrency Survey The Boom And Bust

The New Yorker goes into exhausting detail about the beginnings of the crypto industry, paying special attention to Vitalik Buterin and his unofficial power over the scene. Throughout the long article, the author travels to crypto conferences all over the world, has blockchain explained to him countless times, and gets several opposing views (Joseph Lubin, Jimmy Song, Amber Baldet) of the space.